Amazing Food at the Luang Prabang Night Market in Laos 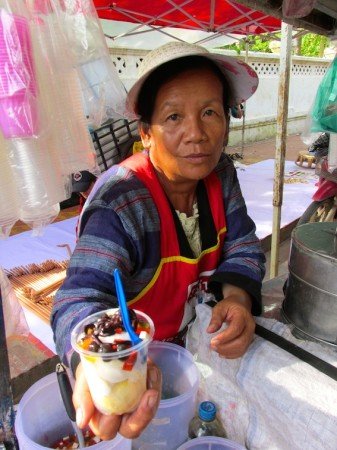 I left the guest house hurriedly, away from the quaint little red brick side street next to the river and towards the buzzing sound of the city.

The sun was beginning its early stages of setting and you could tell the night began to liven with a buzz as local Laonese and Westerners flocked to the streets.  Small stands stood abruptly against the darkening night, meanwhile, the locals began selling small snacks of fruit and gelatin cups, cloth and various ornaments.

The night market here seemed to have a different buzz to it than that of the raw markets in Vietnam, the bird market of China and the floating markets of Thailand.

Where as these markets seemed to carry a stagnant smell to them, the one and only night market I happened to visit in Laos (this one) happened to be filled with smiling faces, sweet chatter and a delicious aroma of varied meats cooking in the alleyways alongside coffee shops.

But what were the one and only thing making this evening better?  How about the picturesque temples overlooking it all.  As I browsed around taking in the view for the evening, I had no shortage of food to sample and, eventually, my little hops turned into a sluggish slumber of a food coma.

Enjoy the following photos I took while spending a night on the town in Luang Prabang, Laos! 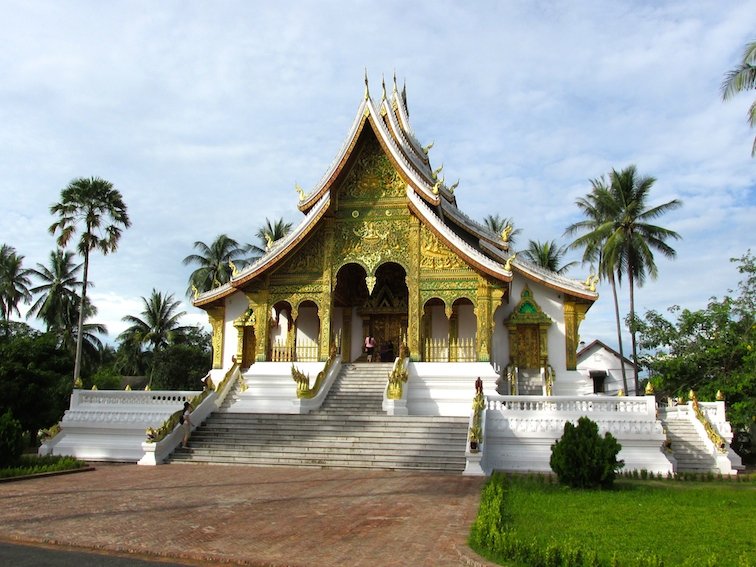 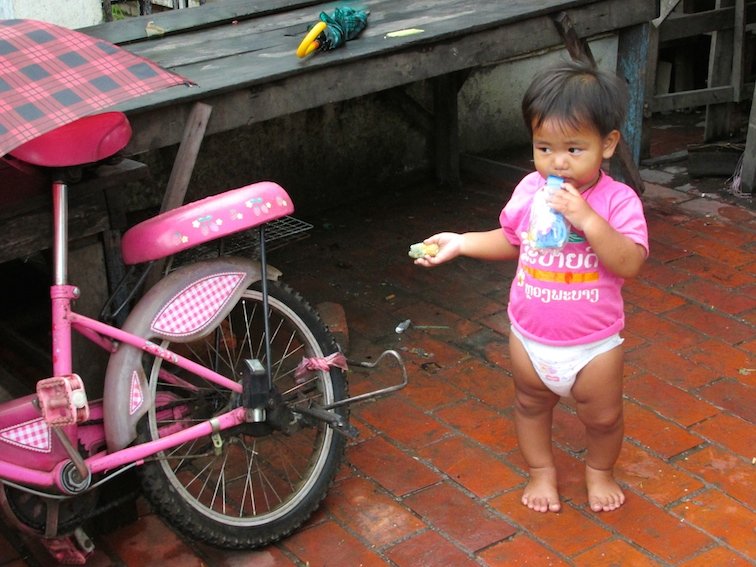 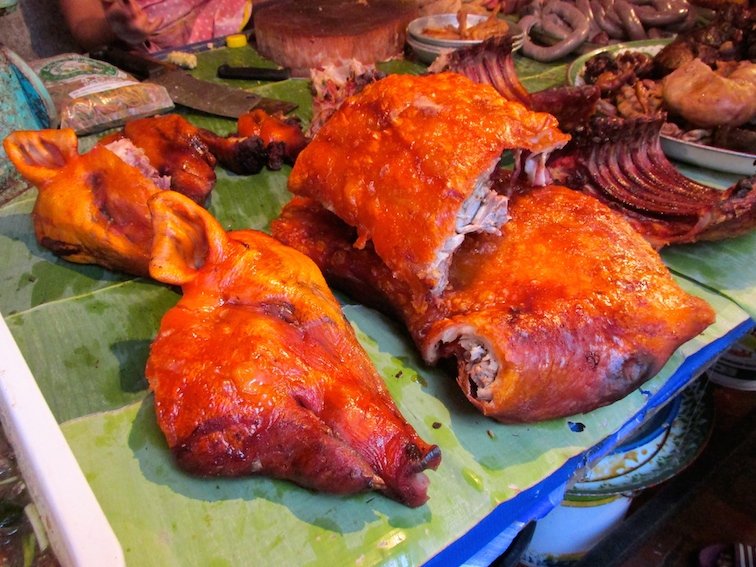 There was a ton of food to sample.  Anything from freshly baked pig heads and ground-up homemade sausage (wrapped freshly in the intestine) to grilled river fish and other spiced meats.  There was even a good variety of newly picked exotic fruits of which were delicious (despite not knowing what they were)! 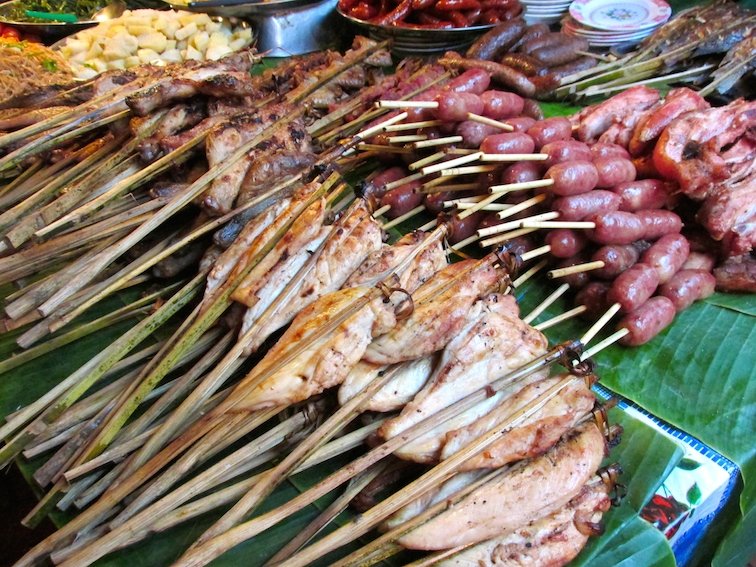 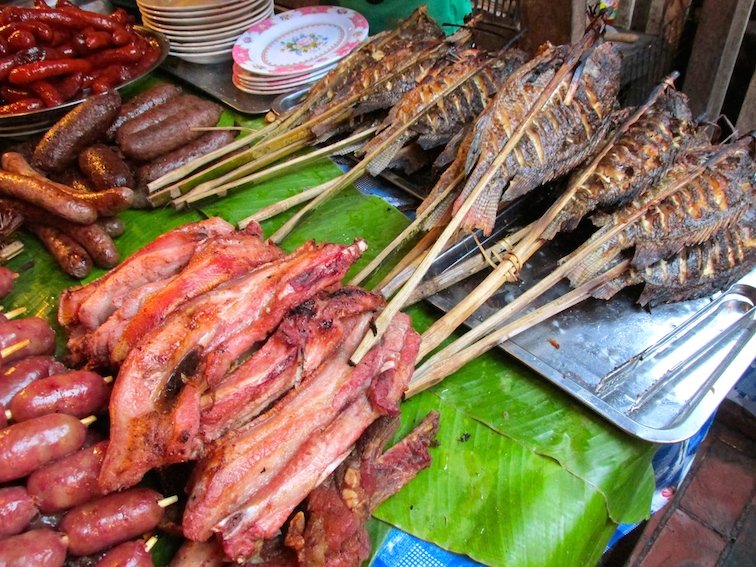 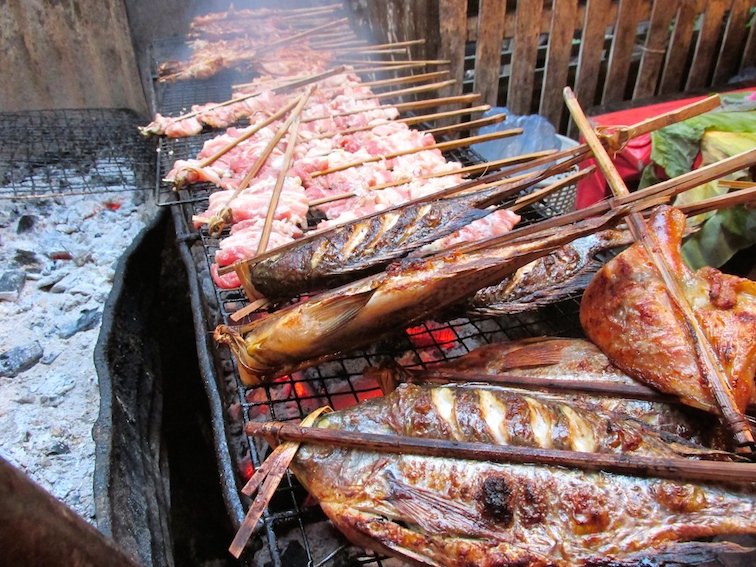 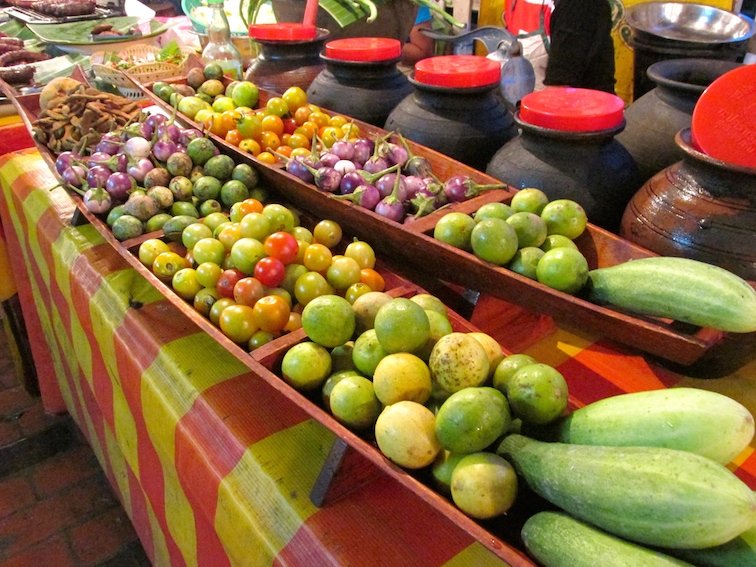 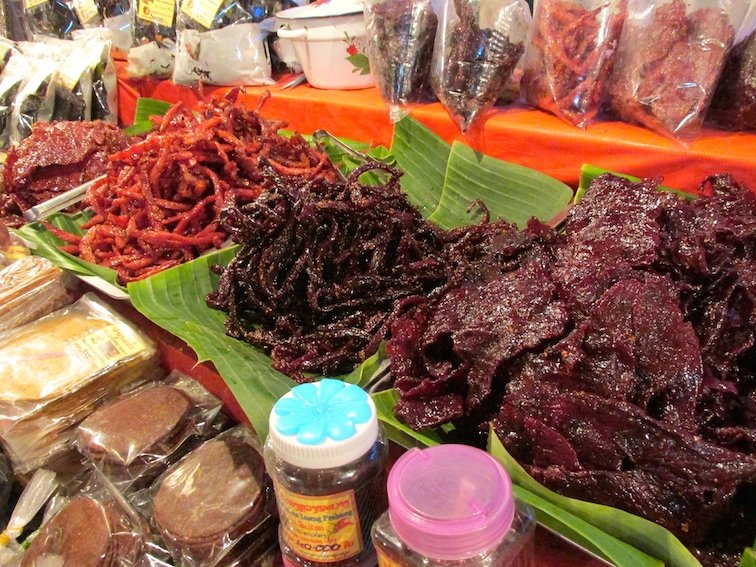 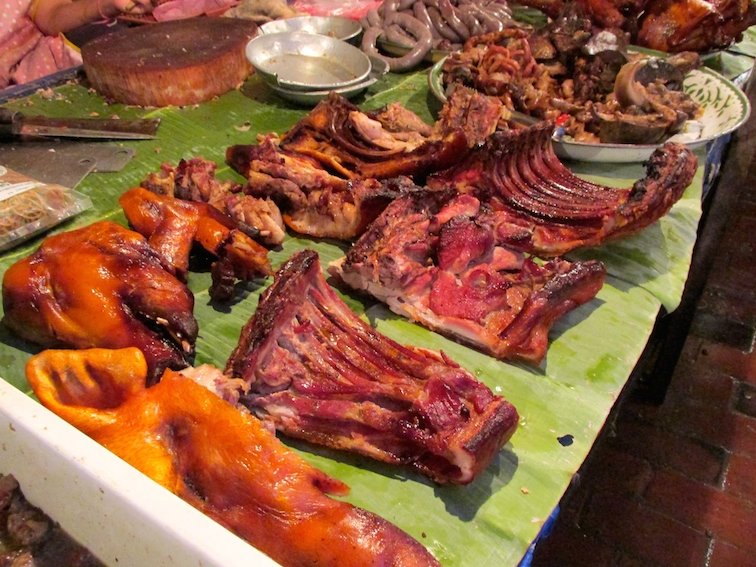 After stuffing my face with yet more food, I gradually walked through browsing at the selection of cloth that was being sold.  Many of the locals wore these garments as part of their everyday clothing which really complimented their skiing pigment.

Not much of a shopper myself, I followed my nose back towards more food and found some delightful doughnuts & fresh Laos coffee. 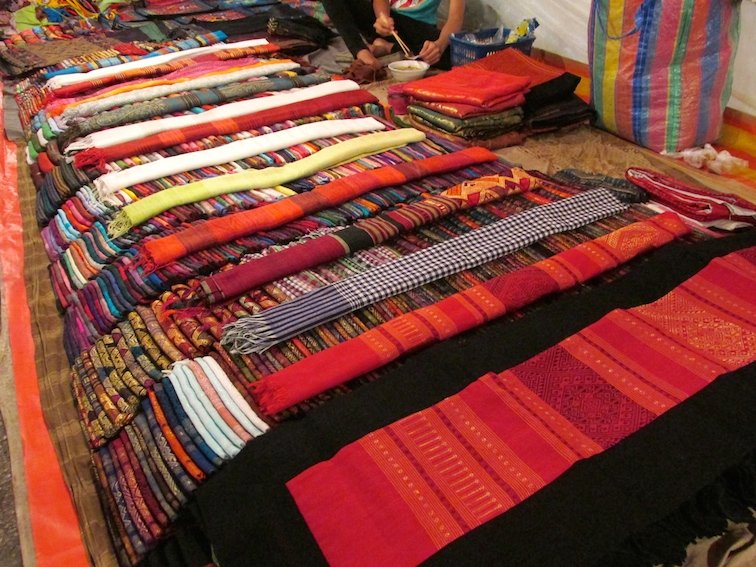 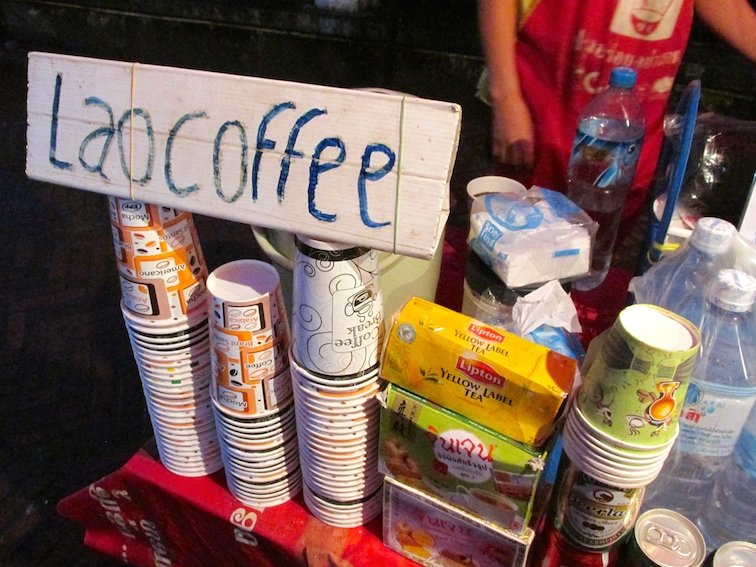 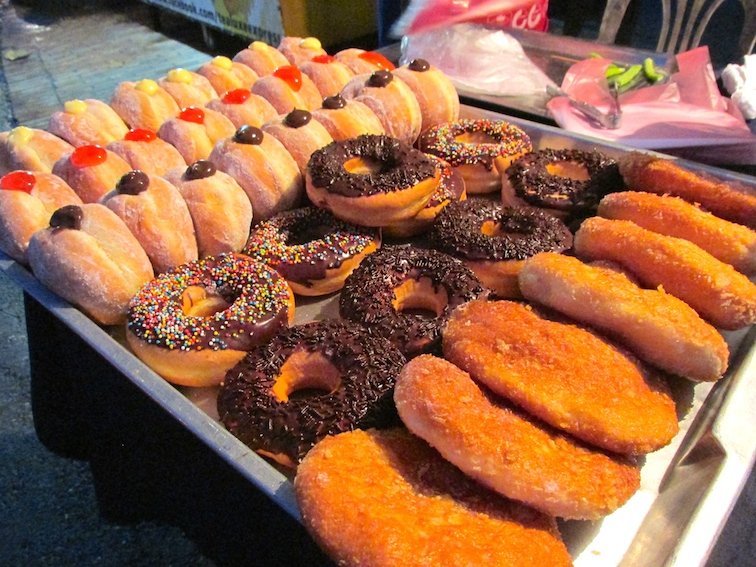 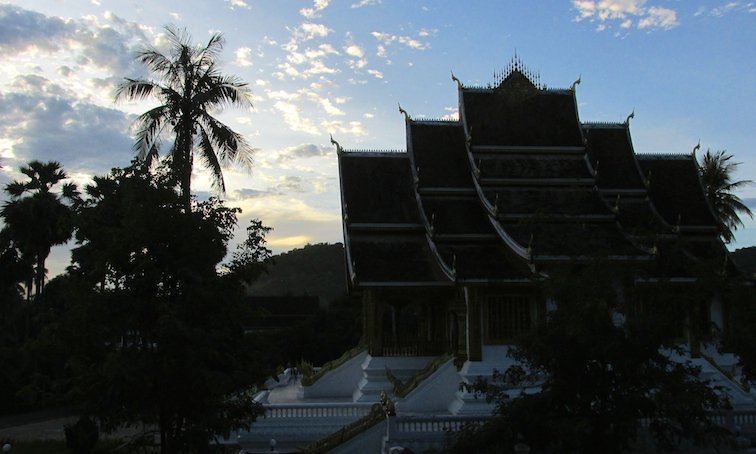 After all was said and done, I finished off my night with a pleasant conversation by a fellow traveler over some of the best coffee I’ve ever had.  If you ever get the chance and you’re a big fan of coffee, you’ve got to try local Laos coffee!

What’s the most exotic thing you’ve ever eaten?