A Baby was Born on my Slow Boat Cruise in Laos

The day started out quite placid.  Ten of us rode with our driver and his ludicrous driving skills from Chiang Mai, up through Wat Rong Khun and finally to the river where we were going to catch the slow boat to Laos from Chiang Mai.

At this point most of the driving skills that, although westerners frowned upon but locals were accustomed to, had numbed my senses.  I had pretty much just gotten used to the fact that I was going to get into at least one, if not two, near death collisions every day while in Southeast Asia.

But to my surprise the drive was fast and before I knew it we had arrived at the boat landing dock, all the passengers handed over their tickets and began the long 2 days, 1-night cruise up the Mekong River towards Laos.

But this was no ordinary cruise like that of what you would find, say in the Bahamas with a big name company like Celebrity Cruises or Norwegian Cruise Lines.

No, on this cruise we boarded a simple rickety boat that was packed to the rim with around 60 or so locals and tourists going up the river to Luang Prabang.  The water seeping into the engine room alone told me that this wasn’t probably the safest of boats to take, but hey, at least we were getting to where we wanted to go. 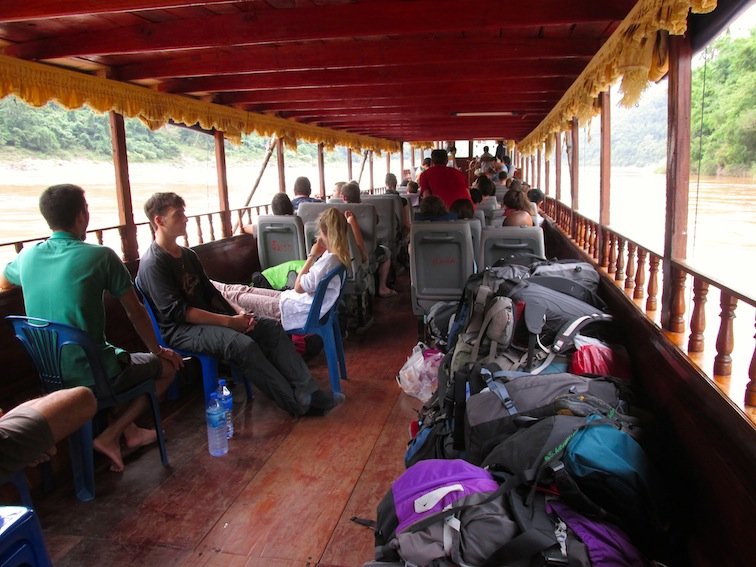 Our boat in all of it’s white, red and lime green wooden glory was wedged in between about 15 other boats on the side of the river.  The captain and his family had to work carefully to push the other boats out of the way just enough so he could put the motor in reverse and back into the main part of the river.

After about 10 minutes of smelling the strong fumes of diesel fuel and listening to the constant sound of a rumbling engine all the while feeling the boats play bumper car against each other, we finally made it out into the open water.  Then, just like that, we were off.

The ride became much more tranquil once the boat was released from its captive environment.  The roar of the engine was left behind us trapped in the engine room and all we could hear was the wind whistling by our ears, the water splashing against the side of the boat and the chattering of the people who were onboard the vessel.

The landscape was almost surreal.  It seemed like we were stepping back to a time before civilization had taken over the land and I was loving it.  Wild water buffalo were found in small herds ranging from 4-20 members swimming alongside the banks of the river.  Mother boars played with her litter of babies in the mud while the rest of the passel foraged for food.

But only every once in a while did you see any traces of human beings.  When you did see signs of them, it was in the simplest and most basic of form.  For instance, bamboo huts poked out from the foliage overlooking the river banks and local fisherman were out in hand-carved boats paddling up the river to their local fishing spots.

The children seemed to have loads of energy whenever we passed them by.  They would be running in and out of the water in nothing more than loin cloths and some with no article of clothing at all; just climbing up the trees and doing flips into the water while the older ones practiced their net throwing abilities attempting to bring home extra fish for dinner.

After sitting for a while in my seat, I started to walk around and get a better look at the boat itself.  There was a small family that consisted of the boat captain, his wife, two younger children, 2 older children and a grandmother.  Who know’s, the grandfather may have been sitting on the roof smoking a cigarette and casting a net into the river as we trucked on.

Walking to the back of the boat that’s when I stumbled upon their very basic living arrangements.  There were no beds, only thin mats that provided no cushioning at all.  Although they did have a decent set of cooking ware compared to most families I’ve seen in Laos, I noticed for the entirety of the trip they snacked on nothing more than white sticky rice.

It worried me about how much nutrition was in their daily diet but then reminded myself that, sadly, this was the way many families across SouthEast Asia ate.  During the length of our entire trip we must have stopped by 5-10 villages or so picking up and dropping off locals along with their supplies.  As I was sitting in the back of the boat where it was a little more peaceful, the kids would bring in the odd animals of which I assumed would be dinner at a later time.

Altogether I must have made acquaintance with 2 large catfish, a chicken and her chicks as well as a little piglet that never seemed to stop squealing.  After a long days journey we eventually made it to a tiny village where we settled in for the night at a guesthouse only to drink some Lao Lao (the local spirits that’s brewed and reminded me a bit of moonshine), rose early to eat breakfast and began day 2 of our journey to Luang Prabang the following morning.

On day 2 the ride up the river became a little more scenic.  Although there was still a fairly small amount of people along our route, we did see a few more bamboo hut villages that seemed to cling alongside the muddy cliffs.  One could only hope they wouldn’t slide down into the river on a rainy day in a mud slide.

Things were going smoothly and we were only a few hours boat ride away from our final destination until everyone began to panic.  Getting up to investigate, I wish I had just sat back down because sprawled out on the floor was a local Laos woman who seemed to be in her lower 40’s.  In front of her was a baby…her baby!

Apparently this woman got on the boat,

prego, and didn’t tell anyone about it!

That’s right…her water broke.  There was a local woman lying on the floor, her water broke AND she gave birth without telling anyone!  Crazy right?!  I’m sorry but you can’t just make this sort of thing up and, even if you don’t believe me, I’ve got the pictures to prove it!

Now to me, this is the coolest yet grossest thing in the world.  Come on now, I’m a 24 year old guy.  Child birth, although it’s super precious, is super gross and you should expect such comments from me.  But once I got to the side to where all I saw was her shoulders, I learned to appreciate the entire situation much more.

Luckily for the woman there were 4 intern doctors who happened to be onboard from France traveling to Luang Prabang who, once they knew what was going on, immediately came to the rescue.  All I have to say is that these people are my heroes.  From my understanding this was the very first child birth any of them have ever given. 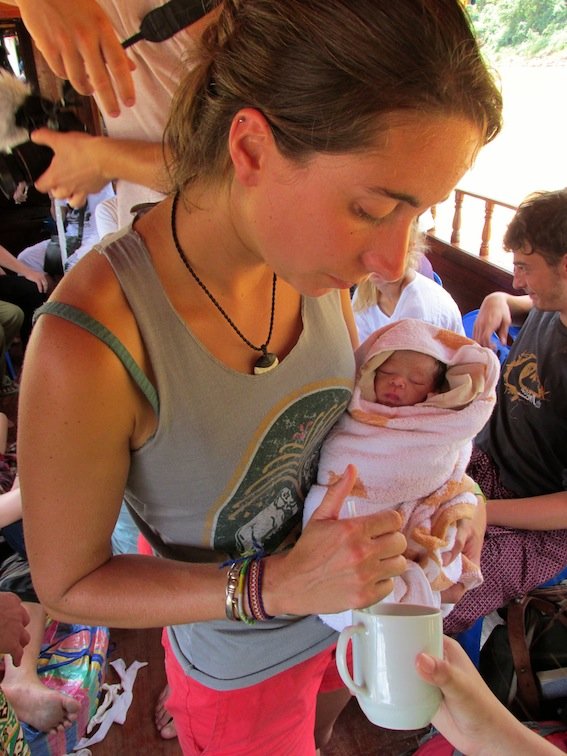 Out in the middle of the jungle in Southeast Asia, on a wooden boat with absolutely no sanitary conditions and/or equipment to work with these 4 soon-to-be doctors successfully helped this woman give birth and kept her and the baby in a stable condition until we reached the port in Luang Prabang.  Amazing right?  All I’ve got to say is that they are going to be amazing doctors…not to mention the kick-ass story they’ll be able to add to their resumes!

Once the newborn baby girl was all cleaned up they began to start feeding her but, I’m guessing because the mother was so old, she was not producing any milk for the baby to feed.  Now I’m no doctor but from what I understand I guess it’s very important for the baby to start eating within the first couple of minutes from it’s birth.

That’s when another local Laos mother came to the rescue.  Being she had just given birth a few weeks ago she was still producing milk so, after the doctors collected her donation, they gently fed the little girl via a silly straw.  Hey, if there is a will, there is a way!  The doctors remained by the woman’s side for the remainder of the journey. 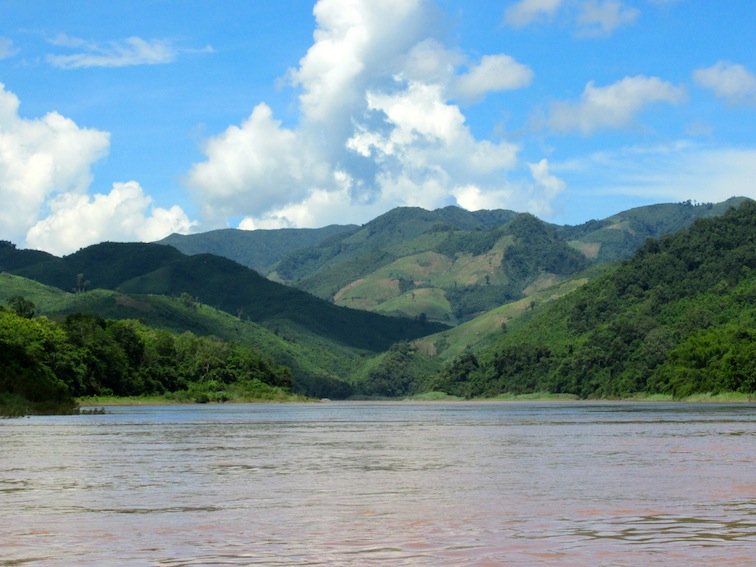 After about 3 to 4 long scenic hours later we finally arrived at the port where we disembarked the vessel and made our way into the city.  I must say that the entire experience was, once again, very humbling.  I had witnessed my very first childbirth that I could only describe as a miracle.

I’m just thankful for the doctors who were on board that day because if they weren’t present where would that woman and her little girl be today?  Would either of them have made it in such random conditions?  Who know’s, all I know is that this lone travel blogger has now got an experience very few have gotten before and for that I’m thankful. 🙂

Have you ever been on the slow boat to Laos from Chiang Mai?