Things to do in Tenerife – The Land Shaped by Fire 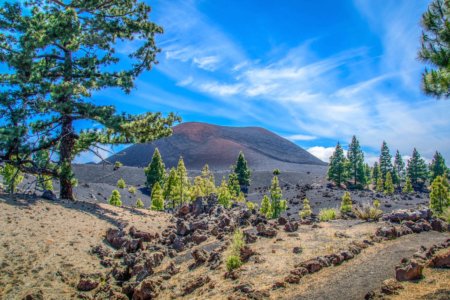 Tenerife is unlike any other island I’ve ever seen.  The land resembles a moonscape type layout that makes one think they’re walking on the moon instead of a piece of the Canary Islands.

Only this moon contained a tropical & dramatic rocky outcrop, a soaring volcano in the center and palm trees growing richly out of the volcanic ground and reaching high into the sky.

It’s somewhat similar to the volcanic islands that have resulted in the chain of Hawaiian Islands but all in all, it’s a totally different vibe with much less of an American influence.

Although Tenerife, like many of the other Canary Islands, has become known for its beaches, there is still much more to this rugged little island that has been nicknamed as the land of contrasts.  Even to this day, there are still plenty of small little “gems” and things to do that can result in a totally awesome off the beaten path experience.

Exploring Tenerife and the Canary Islands

The Hidden Town of Garachico

Away from the beaches of the south coast, Garachico is something of a hidden gem on Tenerife. The town is located on the northern coast and is a more traditionally Spanish town than many of the more touristy destinations on the island. Garachico is known for its sweeping sea views and for its narrow, traditional streets.

One of the best attractions in Garachico still remains Castillo de San Miguel. Because of the climate, the fort, natural swimming pools and many of the city’s older buildings, it resembles those of the Caribbean or Latin American cities like Old San Juan in Puerto Rico, giving this small town an exotic feel.

Teide National Park takes up most of the central highlands of Tenerife and no attempt to go off the beaten track is complete without a visit.  The National Park is located around Mount Teide, the volcano at the center of Tenerife, and the one responsible for much of the dramatic landscape. The volcano hasn’t erupted since 1909, and its last major eruption was in the eighteenth century.

As the highest point in Spain, the National Park is famous for its wildlife as well as its beautiful scenery.  Snow-topped mountains meet tropical flora, giving way to the Atlantic Ocean which is the perfect place if you’re looking to go trekking for a few days.  During this time you’ll witness many steam vents, earth cracks, and major cliffs!

Buenavista del Norte is appropriately named as ‘the beautiful view of the north’. Surprisingly, however, the village is not located in the north, but on the West of the island. Because of this, its climate is different from other parts of Tenerife. Unlike the tropical climate of much of the island, Buenavista del Norte has a far more Mediterranean style of weather, which gives it a rich and verdant appearance. With its lush green hills and colorful flowers, Buenavista del Norte seems to belong to some other part of the world, and not this volcanic, rocky landscape.

So, if you are looking for more than a simple beach holiday and enjoy exploring an island that varies greatly in appearance from valley to valley, then Tenerife is the destination for you. With flights to Tenerife being frequent and inexpensive throughout the year, it’s one of the best-value holiday spots around.

What locations in Spain would you recommend visiting year round?