As the constant breeze whipped across the sand dunes, I couldn’t help but notice the sea oats dancing merrily with each other.  Rocking in sync with the ocean as the waves crashed upon the beaches of St. Augustine.

It was as if I was playing with the volume on the radio, except it was with the ocean and she was giving off a melodious tune, rising and lowering in sync with her mesmerizing waves.

The sun, as devoted as could be, basked the nearly deserted beach with a warm welcome.  The sea oats tended to glow in the mid day sunshine and I couldn’t help but to meditate amongst their presence.  It was such a perfect day.  Nothing had gone wrong and I was simply there…existing.  This is just one of the many reasons why I enjoy going to the beach, but in particular, the beaches of St. Augustine, Florida.

Sitting upright with my legs crossed atop the sand dunes on the white beach, I began to go into a deep trance while meditating and had sat there for what must have been nearly half an hour or more.  It was simply astounding how ones self could simply eliminate all of their problems when at the beach.

Absolutely nothing came across my mind but sheer blissful awareness.

Surrounded by sea shells that had gotten washed up during the last major storm, I felt the presence of another being around me as a modest amount of sand went along the side of my leg.  Bringing myself out of this deep and welcoming meditation I had let myself fallen into, I very slowly glanced down to find a teensy sand crab digging a whole next to me.  Minding her own business as I did mine, I brought my attention back to the vastness of the Atlantic Ocean where I could watch the perfectly forming waves break into the shoreline.

Scanning the horizon, I saw a family of seagulls playing in the surf while hunting for their afternoon snack.  There seemed to be three full grown adults and four young ones.  It had always impressed me how animals could learn how to play, hunt, and survive without speaking a single word.  Continuing to watch the young ones play in the surf, I got up, brushed the sand off of me and started to make my way to the line of rocks that were piled for about a half mile length down the beach where my friends were.

As I approached the clump of shells which had stuck together and formed the rocks that patrolled the water line, I began scanning to see if I could find any sea creatures hiding amongst them.  To my surprise, I found much more than I had initially expected.  As soon as I began to climb over the first few clumps of rocks, I had spotted a mid sized blue crab waddling back and forth out of it’s den while hunting for food.  Playing hide and seek with him for a short while, I eventually moved on and began to scan the rest of the rock faces.  I didn’t find much more, just a few small fish here and there.

Getting closer to my friend and sister who had came to St. Augustine with me, we all sat in silence listening to the waves break on the shoreline.  They were breaking perfectly out there.  Scottie and I had immediately regretted not bringing our surfboards.  They were nothing compared to the monster swells we had caught the last time we went out surfing during Hurricane Irene.  But they were just large enough to catch for a few seconds and then gently reside back into the sea.  Three to four foot swells are just about perfect when you want to spend a relaxing day surfing without losing all of your energy while paddling out.

“…you can look down into the water and see sharks, dolphins, & schools of fish everywhere…”

Bringing my attention back to the present days events, I noticed my sister had strolled out into the ocean.  She absolutely loved it out here.  Letting go of all her strength and giving into the ocean, she ever so elegantly fell back into the water and gave out a yelp of joy as she realized the water was slightly chillier and more refreshing than she had expected.  With a smile on her face that could expand the length of the universe, she motioned for Scottie and I to come and join her. 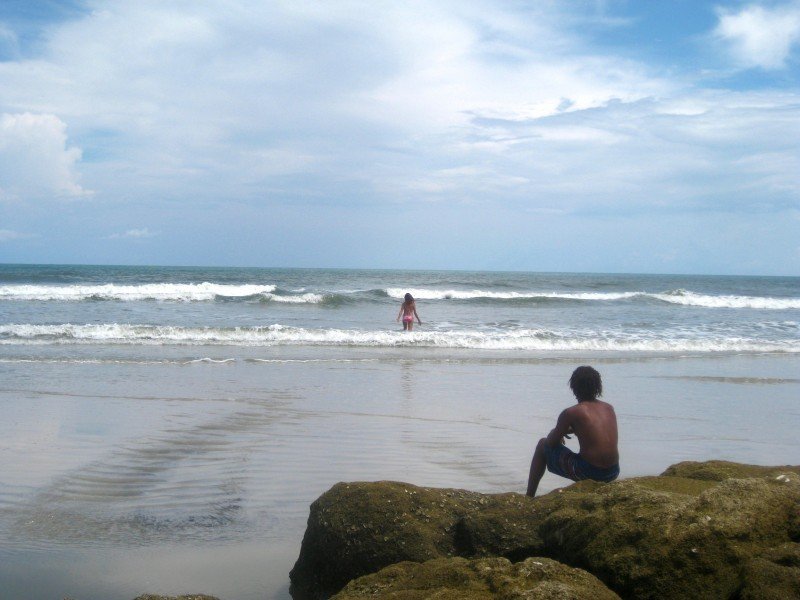 Giving into the urge, I began to make my way into the water and welcomed the oncoming waves leaving a cool sensation onto my skin.  The water was indeed very refreshing as I walked into the surf and before I knew it I had plunged into the ocean and swam the rest of the way to where my sister was standing.  We laughed and played with the ocean as wave after wave rolled right on by us, jumping to the peak of the crest and body surfing into shallower waters.

Hearing the cry of some feathery friends above us, I glanced up to see six full grown seagulls fly by, coasting on the wind heading south for their next landing spot.  To imagine what it would be like to fly above all of this and to see what they could see.  I’ve personally never been in a helicopter tour around the beach but I hear it’s quite impressive.  I’ve always been told that when you’re up in the sky, you can look down into the water and see sharks, dolphins, and schools of fish everywhere patrolling the shoreline.

After we played in the water a little while longer, I got out, dried off and then we began to inspect the rock face as we walked down the beach.  What we found most peculiar were these little shells that seemed like long fingernails.  They were everywhere around the rocks as well as up and down the beach.  I gathered a few of them and took some pictures then continued inspecting the beach for other interesting items that may have washed up.

Picking up a few sea shells here and there, I handed them to my sister for a potential necklace she was going to make later when we got home.

Strolling down the beach, I glanced back and spotted my sister walking over to my friend who was still perched atop his rock while he daydreamed at the ocean.  This would’ve made a great location to go camping off the beach…and boy I would’ve enjoyed spending a few days just losing myself to the ocean bliss.

Knowing that they were both enjoying themselves, I began to inspect an odd shaped object that seemed to just stick straight out of the water but at quite a length.  It seemed to me that it was an old piece of metal that had somehow been carved into several sharp ends by the ocean.  “That could be dangerous”, I thought to myself then immediately realized what a perfect picture opportunity it was.

Remaining patient as the waves moved in and out of where I was standing, I took a handful of pictures and began to make my way back up the beach to the ones I loved most in my life. Packing our bags we began to head back to the car to prepare for the events that were to unfold this evening.

Needless to say, we really enjoyed our small escape to St. Augustine and also had a lot of fun exploring the outskirts of Fort Castillo de San Marcos, a spanish settlement similar to Fort Castillo San Cristobal, later that night.  We played in the lights which created giant shadows against its massive walls and danced in the moonlight.  Afterwards we visited a few local pubs and shared drinks, laughs, and stories with others sitting at the bar but I digress, that’s a story for another day!

Have you ever been to the beaches in St. Augustine, Florida?