I love the rain…the soft sounds of the rain droplets hitting the ground as if it were caressing velvet.  The fresh, earthy smell of the dirt rising from below.   Even the look of it…it’s all so…so enriching; providing the best sleep a man can get.

When I awoke from my lumpy hostel mattress, I turned over and heard the familiar sound of these enriching droplets on the tin roof that was a mere 4 foot above my head.  The one air conditioner cooling the entire dormitory was giving me chills so I quickly pulled the thin sheet I had supplied to me over my head wishing for another few hours of sleep but I knew…it was time to get up and if I wanted to get the most out of Culebra I needed to get out there and explore.

As I rolled out of bed and nearly bust my ass as I dropped from my top bunk bed onto the floor, I threw on some pants and walked outside to get more of an idea about how the weather was treating us today.  Sadly, it looked as if it was going to continue raining for quite a while but I was damned if I was going to let that ruin my plans for the day…besides like I said, I Love the rain! 😛

Noticing that my buddy Scottie was already rolling around, we threw on our board shorts, grabbed the snorkeling gear and went outside where the hostel owner had agreed the previous night to give us a ride to the infamous Flamenco Beach.

A heap of advice which included us bypassing a sign stating “DANGER KEEP OUT” and five bucks later, Scottie and I jumped out into the rain with our snorkel gear and began making our way to this private beach the owner had referred us to. 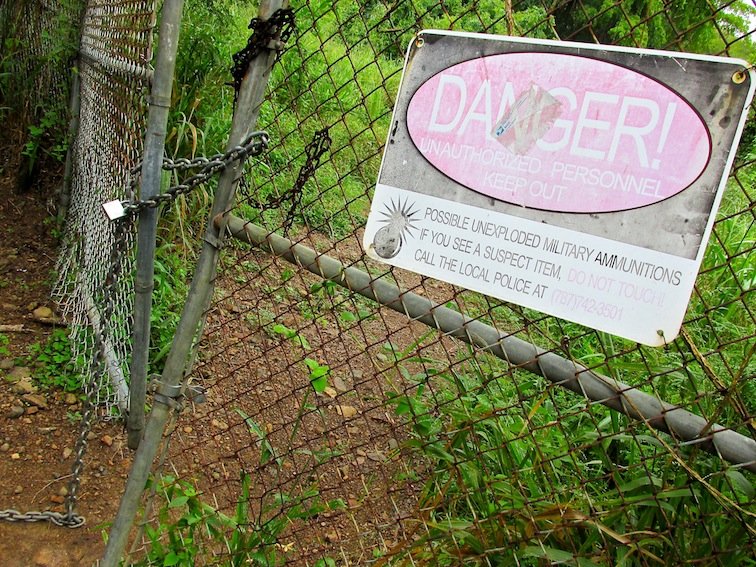 Possible Military Ammunition…Nope it didn’t slow us down…

Little did we know at the bottom of the sign in smaller print were the words “POSSIBLE UNEXPLODED MILITARY AMMUNITIONS”…yet with the advice from an old man we barely knew we kept going.

Struggling to keep our footing as we slid up, down and to the side of the designated path that had been worn out by previous explorers, the chill of the rain quickly evaded into a warm mist as our bodies warmed up through the entire hike.  I must say, wearing my bald sandals offered no grip to the muck I was putting them through.  I attempted stepping to the side where the grass was but every step off the path offered a foot full of sandspers and stickers.

Eventually passing a small peak where we could see the beach, Scottie and I slid our way down to the ocean where the water was crystal clear, even on a rainy day like today.  There was a slight breeze once we got down to the coast line but oddly enough it was soothing to the body as the rain massaged our backs. 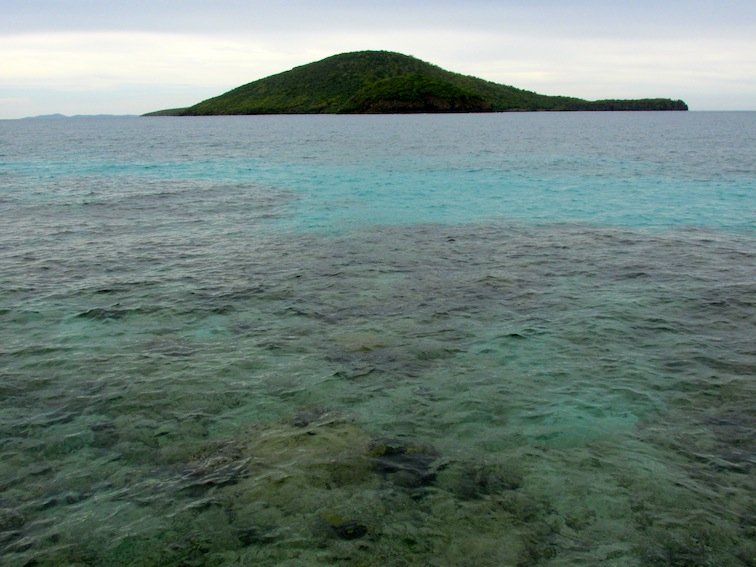 Crystal clear waters even on a rainy day.

Anxious to get in the water, I quickly fastened my camera and the rest of my gear to a tree, grabbed my snorkeling gear and raced down to the waters edge as the rain began to lighten up.  At first we didn’t see much as we began to swim around but that changed drastically.  Just a mere 50 feet from the shores edge, a stingray about as wide as I am was hovering above the ocean floor searching for food.

It was amazing at how elegantly she moved…it seemed more like floating than actually swimming but either way she was beautiful.  Hovering above her and taking in the site for a few more moments, we moved on to see what else we could find.  As we continued swimming further out to sea, the water remained crystal clear but there was no sign of any marine life as far as we could tell.

Changing course and swimming parallel to the coast, thats when Puerto Rico decided to let us take a look at her underwater palace…but how do you begin to explain an entire underwater ecosystem? 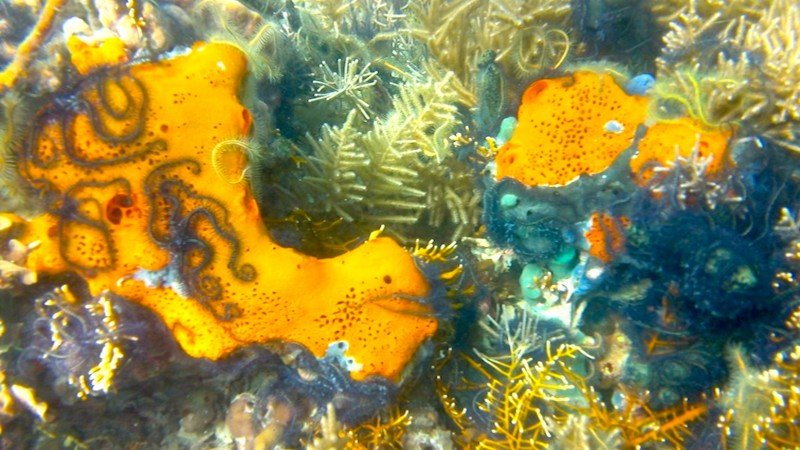 Reef of when I went snorkeling in Panama.

I mean hell, the last time I went snorkeling was off the Island of Bastimentos in Panama but then I had an underwater camera so it was much easier explaining how beautiful the place was.  Here, after swimming around in the warm tropical waters the reef had a totally different feel to it.  Compared to the 3-4 foot tall reefs of Panama, these reefs towered an amazing 10-13 feet!

The bright colors of yellows, blues, reds, greens, whites…every color of the rainbow and more shown brightly against each other in an amazing display on the ocean floor.  A great variety of fish were all intermingling with each other and seemed to pay no mind as we swam by…until we got a little too close that is.  Then they would begin to nip at us annoyingly until we gave them their distance.

Even a sea turtle decided to come out and explore with us a bit, although she seemed to be checking us out more than anything.  It had been nearly 2-3 years since the last time I was able to swim with sea turtles…back when I was Snorkeling in Kauai actually. 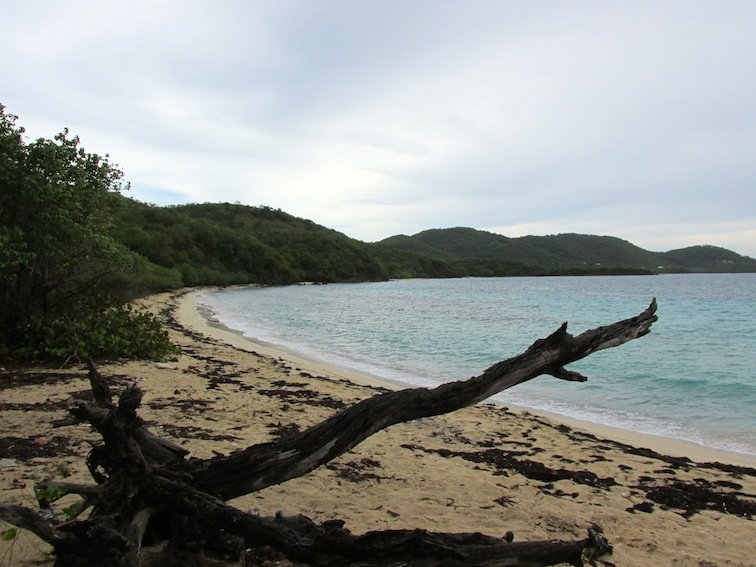 The private beach along the snorkeling spot.

After spending a good 2-3 hours swimming around and exploring the coral reef, I jumped out of the water, dried off and began exploring the coastline.  We only had a few more hours until we had to catch the ferry back to the main island of Puerto Rico so I wanted to explore as much as I could before that time came.

Hopping along and enjoying the sand in between my toes as I snapped pictures up and down the beach, Scottie remained in the water to explore the reef.  It was his first experience ever snorkeling and he was delighted with his newfound hobby. 🙂 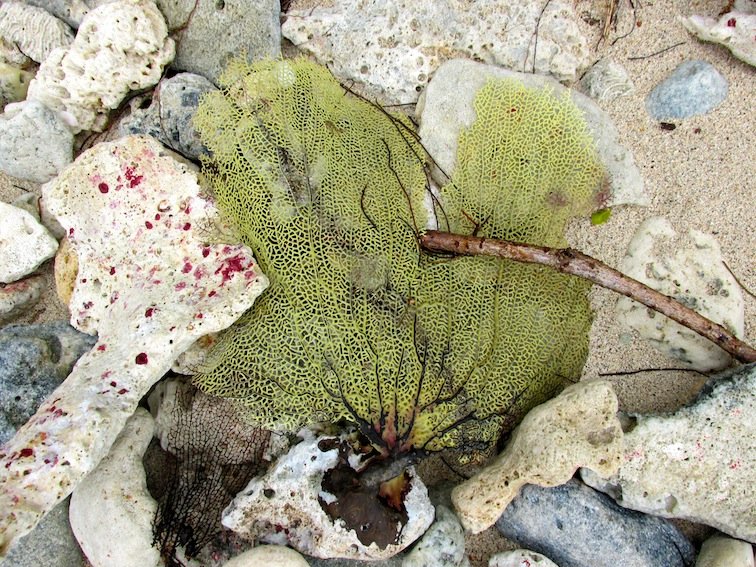 Yellow coral washed up on shore.

As I looked out towards the ocean, it was nice to see the rain secede so that the sky could begin to clear up a little.  Just the slightest amount of sunshine turned a somewhat pale blue ocean into a never ending turquoise blue.  As I walked on, I spotted many different parts of the reef washed up on shore that still held their color.

It was baffling at how even the beach was spotted with the oceans exotic colors…you just never knew what you were going to find!  Between the iguanas, lizards and even tiny little hermit crabs…there was life everywhere! 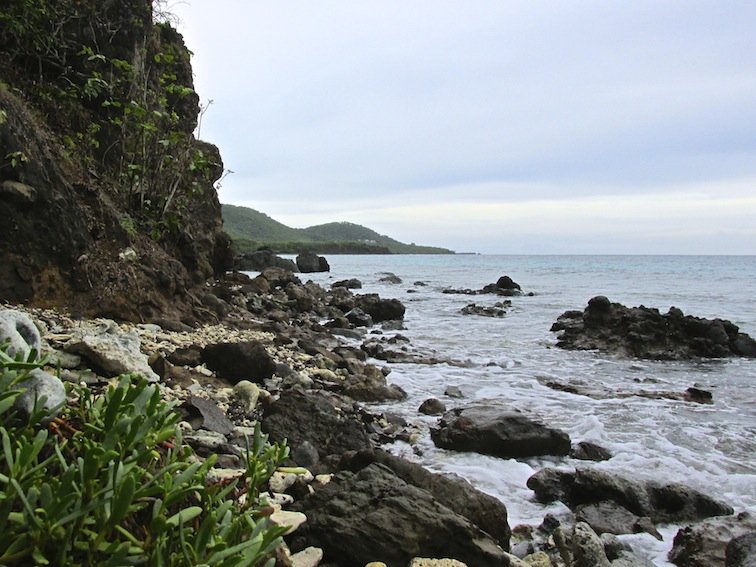 The end of the beach turned rocky & continued to hold many secrets.

Reaching the end of the beach and about 200 snapshots later, I turned around and began to head back to where Scottie was sitting in the sand and staring out wonderlustfully into the ocean.  As I got closer, I saw a wide grin on his face as he told me he just spotted three Manta Rays swimming in a triangular fashion underneath him.

He explained that the three of them, as wide as a small car just seemed to glide through the ocean as gentle as a breeze and that he had never seen anything so beautiful in his entire life.  Nodding with a smirk on my face I knew at that moment he was hooked…and that he would continue on with what we all are so passionate about: traveling.

What’s the coolest snorkeling experience you’ve ever had?