Changing Lives at the Southern Pine Company of Georgia 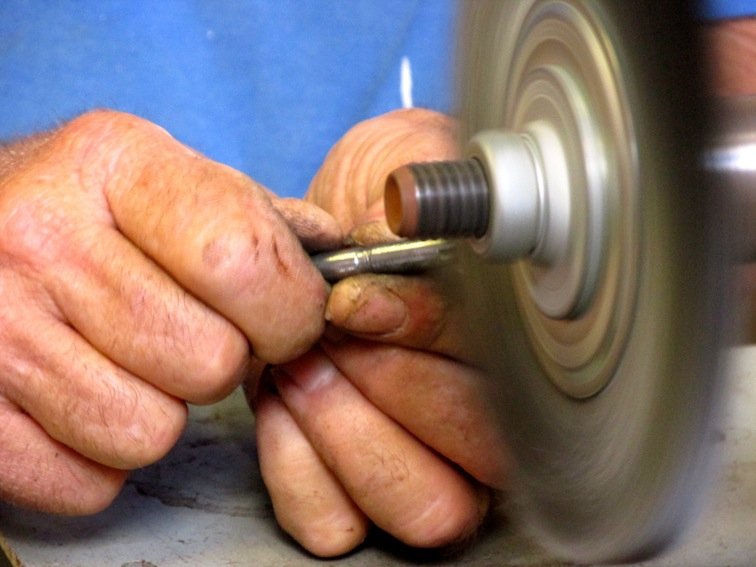 Restoration through the process of renovation. To me, that’s what the Souther Pine Company of Georgia is all about.

In short, they take old rustic pieces of history that would normally get thrown to waste and turn it into something beautiful…something people want.  It’s a classic tale of recycling and it’s wonderful!

But of course, you wouldn’t know this when you arrive at the place.  As the boys and I continued our road trip up the East Coast of the United States, we heard about Ramsey Khalidi; a man who was doing something beautiful…a man with a story.

“It was here I truly learned not to judge a book by its cover.”

In short, he was not only taking old rustic pieces of history and giving it a new beginning, but he was offering this new beginning to people too.  But I’ll touch on that later as now I’d like to show you exactly what the people here are doing…what message they’re trying to give to the world.

The building on the outside consisted of weathered red bricks, iron rods and large windows that held 30 individual glass plains covered in dust.  Surrounding most of the building was a small 3-foot perimeter of grass which was furthermore surrounded by a concrete sidewalk.

The oak trees cast a welcoming shade over the high noon heat as we parked the car and walked to the main entrance where there were miscellaneous buckets, a few center blocks and 4 trash cans sitting outside; 3 to the right and 1 to the left.

It was a bit noisy, the sound of men talking loudly over the constant grind of skill-saws and other power tools echoed throughout the entire premises.  Walking through the front entrance and into the heart of the factory, I was not surprised to find a slew of organized clutter that cast an age old shadow over the entire place. 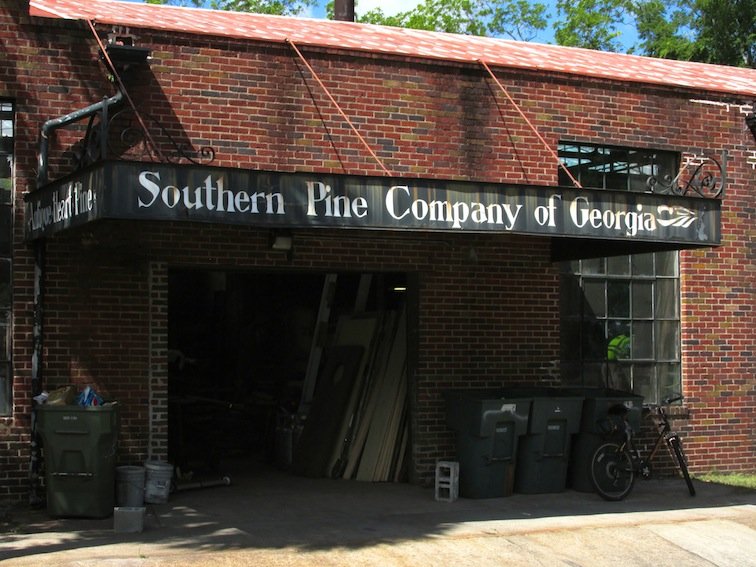 Greeting then walking us into the main office, a young lady introduced me to our guide Malcolm where we began our tour by walking into the owner’s main office where he showed us old maps of the layout from what Savannah used to look like when it was first established.

Telling us a little history about the city, we went on to discussing how many of the older buildings were being demolished.  The owner, Ramsey was apparently appalled at the destruction of historic properties going on in Savannah thus in the 1980’s he founded the Southern Pine Company of Georgia to help preserve these irresistible treasures. 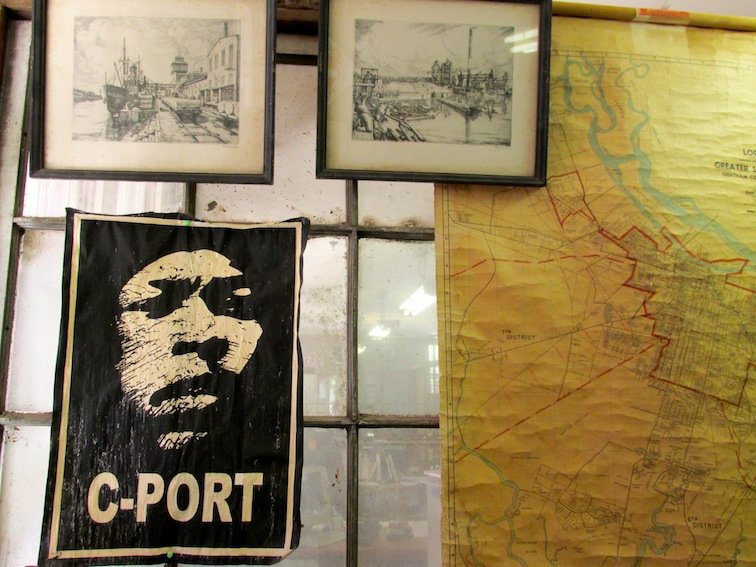 Leading us out of the office and into the main building, he began to show us around the premises and through the conglomeration of items that created the foundation for this entire company.  Browsing through antique televisions, fans, old bottles and even a few sections of an old bowling alley floor, Malcolm showed us how they turned one man’s trash into another man’s treasure. 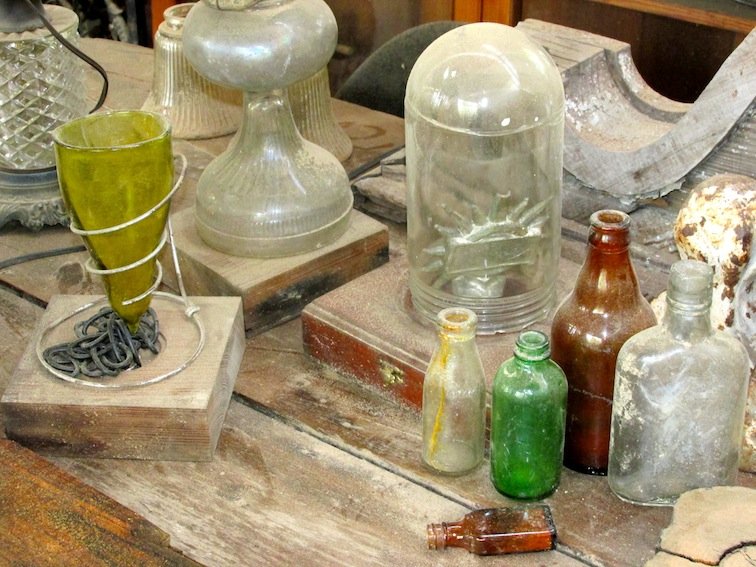 Antique glass bottle on a shelf.

Once collecting an item that can be saved or reused, the first step to bringing it back to life is by refurbishing it.  Most of the wood needs to be stripped and sanded but after that, they simply use their imaginations to decide what they will do with it once it’s ready.

As far as glass, metal and other objects are concerned, they get very creative in creating different “ornaments”.  For instance, hanging in the factory was a giant lamp made from an old skill saw blade.  Cool stuff. 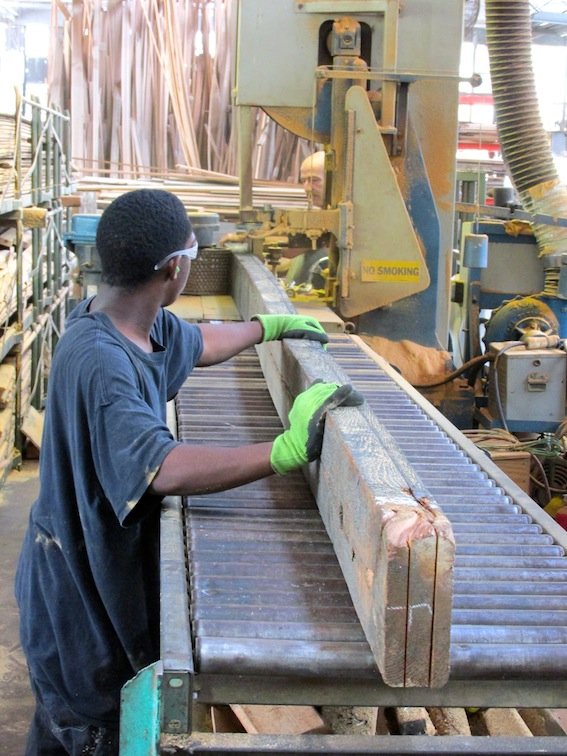 Refurbishing an old piece of wood.

After showing us around the factory a bit, we had the opportunity to get a more “hands on” approach with a small project: creating drink coasters from 18th-century cedar wood.  It was a simple task (I sanded the already cut wood, put a layer of wood exterior finish on and then stamped it) but nonetheless, it was fun!

Making a coaster from 150-year-old wood.

Once I completed my little task, we made our way behind the factory where Malcolm showed us the garden.  It was very interesting yet strangely artistic how everything was laid out.  They used antique bathtubs, retired toilets and many other recycled materials to bring the garden to life which worked out fantastically.  You’d be surprised how one can decorate with just about anything and make it work! 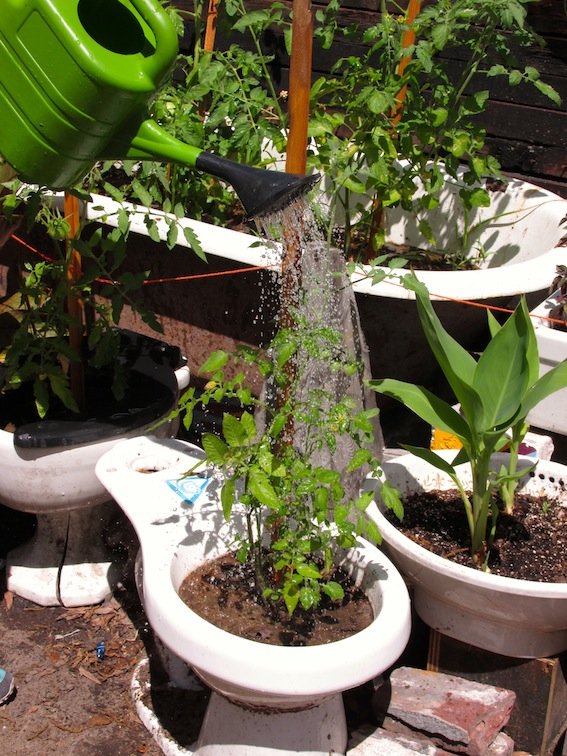 If given a chance, new life can grow anywhere.

An Elephant giving meaning to life.

He made new friends that truly supported his life choices and with this, he began his life supporting others of theirs.  From here, Ramsey has opened the doors of the Southern Pine Company for many people that would otherwise be considered “outcasts” to society so that they have an opportunity to fit in and belong.

This is a huge thing considering that it’s very important for someone to feel like they belong somewhere.  It gives people a second chance to change their ways and/or gives them the opportunity to truly express themselves.

In other words, it gives them a meaning to life…that’s the big difference I found Ramsey doing…the message he was giving to the world.  All the way from the foundation of the company to its workers and more, he’s giving the message that no matter what you always have a second chance to shine.

Have you ever been to a place like the Southern Pine Company of Georgia?