Discover the Little-Known Secrets of Doi Suthep in Chiang Mai

Chiang Mai is an incredible city in many different ways. As the largest and most significant cultural center in the northern region of Thailand, Chiang Mai attracts millions of visitor each year for its pleasant atmosphere and really nice temperatures. They come from all corners of the world to enjoy everything the city has to offer—natural beauty, upbeat nightlife, shopping, traditional festivals, and nevertheless, glorious temples. The city also offers many dining options and you can easily book a cheap hotel in Chiang Mai.

The city most famous temple was built in the 14th century. The road leading to the peak of Doi Suthep is a windy one.  As the closest mountain casting a shadow over the city of Chiang Mai, it’s one of those must see places when visiting the area.

I heard what awaited at the top was one of the most distinct temples in the area and, for those willing to venture even farther into the jungle, there were two villages that saw relatively few tourists as they were a bit more difficult to reach unless you had hired your own personal scooter.

Another thing I heard was a number of old trails where monks had tied “orange cloth” around some of the trees to mark the land as holy.  This, in effect, protected the land as most Thai people refused to cut the ribbon as they believe in Karma.  If a perpetrator were to cut the tree of which the ribbon was tied around, it would result in bad Karma for not only that person in his current life form, but for future lives to come.  Needless to say, I felt the area was worth a look around and a bit of exploring.

As I drove deeper into the jungle and rose higher in elevation, I noticed the temperature gradually changing from that hot, humid and rainy weather of the city to a much cooler & breezier wet environment.  It was a lovely change to get out of the hot weather for once but as soon as it started raining, my body temperature dropped instantly to a small shiver.  Luckily I had brought my rain coat along for the ride (after all it was monsoon season) so I stayed just warm enough to keep trekking forward.  After about 45 minutes driving up long windy roads, I finally arrived at the base of Wat Phrathat Doi Suthep.

Small stalls lined the streets as many tourists visited this destination every year and the locals were more than prepared to make a normal weeks worth of wages by selling their pricey ornaments to the tourists passing by.  Parking the motorbike against the curb, I locked the strap of my helmet inside the seat compartment, set the parking break and began the steep hike to the top of the temple.

As I rose to the top where the stairs began, I noticed two very colorful dragons on each side acting as handrails as well as guardians of the temple representing the dragon’s power of clarity.  They were very colorful and well up-kept compared to others I’ve seen at previous temples around Chiang Mai.  It was clear much time & love was put into the presentation of this very popular place.

Reaching the top of the stairs with two wiggly legs and sweat beginning to appear across my forehead, I saw two options to enter the temple: one for tourists & the other for locals.  A man quickly came out and pointed for myself to go through the tourist area but, after he turned his back to speak with a fellow colleague I quickly slipped into the locals entrance without having to pay the 30 baht fee.

What can I say?  I’ve found the two-tier pricing system in Thailand is quite obviously corrupt everywhere you go.  It was just like when I paid 500 baht ($20 USD) to enter the Grand Palace in Bangkok while the locals got in for free.  Sure, it’s not really right to not pay the fee but I don’t like getting ripped off either.  In the end, it’s only hurting the tourist industry in this beautiful country.

But regardless, I made it inside and even if I had paid the 30 baht, it would have been well worth the price. 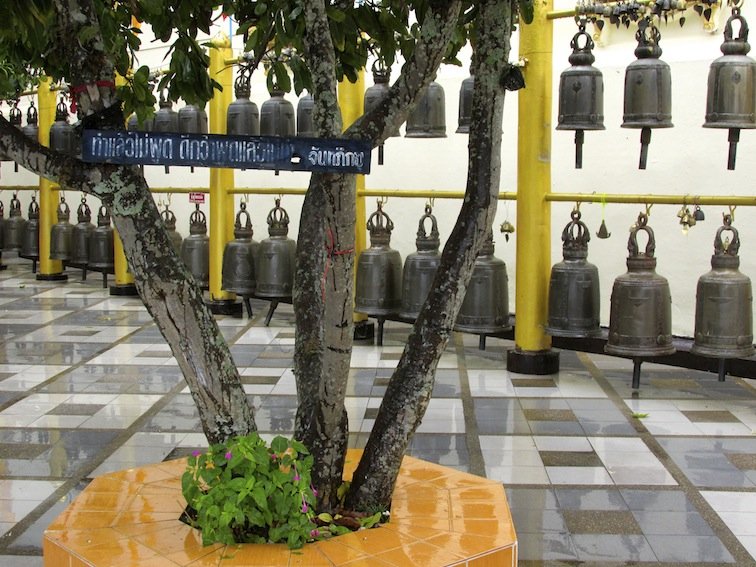 Strategically walking on the lines of concrete in between the wet and slippery tiles as to not fall on my rump, I began walking clockwise around the temple.  It was very beautiful and, even in the rain, stood out to me considerably more than most temples I’ve visited around Thailand.

Very large bells were lined in rows against the main temple walls awaiting the traditional ceremonies practiced each morning & evening by the monks.  Trees imitated giant vines reaching upwards to the skies and, being that it was raining, there were few tourists walking around so it ultimately created a very peaceful atmosphere.  If one of the monks were to drum against one of the numerous giant gongs in the area it would have echoed for ages.

Circling the building and arriving at the backside, there was a surprising view overlooking the entire city.  It was very cool and somewhat alarming looking out as you could see the rain cutting the city in half.  After taking in the view for some time, I continued to walk around the building enjoying the ancient and almost surreal Chinese architecture.

A monk would pop out every now and again in their simple orange wardrobe and brown slippers.  I try to make eye contact with them whenever possible and, when we do, we simply smiled at each other, nod very gently and continue walking peacefully through the temple.

After taking in the entire circumference of the main temple, I took off my shoes and made my way inside to see the main shrine.  At this point, the clouds were beginning to clear up as the sun peaked through and cast a warming blanket of light over all of Wat Phrathat’s visitors. 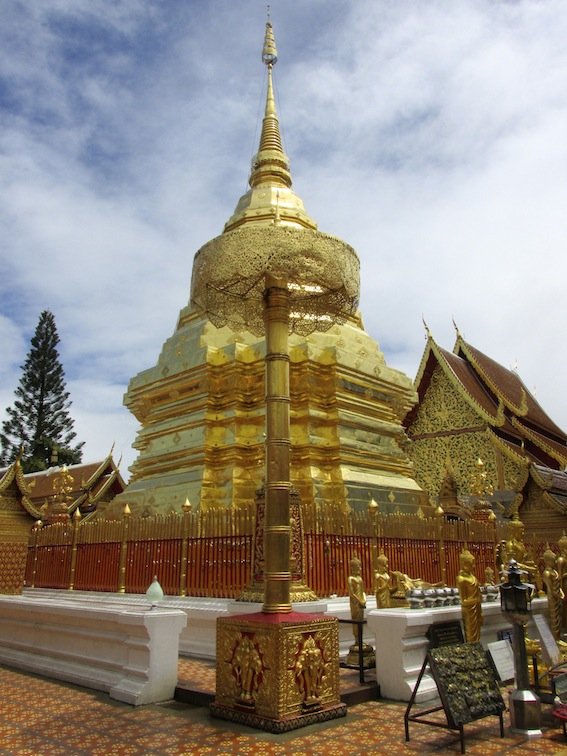 It was a site to behold this towering gold-colored and pointy shrine.  Even smaller golden Buddhas were sitting at the base around the outside and I believe they represented the different days of the week.  Continuing to walk around, I noticed some of the locals walking in a clockwise fashion with a flower and small piece of paper saying a chant very delicately over and over again.

Acknowledging the sacredness of the entire place, I respectfully knelt before the main Buddha in front of one of the monks, gave thanks and made my way out of the temple and towards the scooter.

Driving further up the mountain I noticed a really thick mist from the clouds starting to move in and, the higher I drove, the thicker it became.  The road became increasingly narrower, about a fifth of the size of what they had been before and was maintained at a lower quality.  There were spots where trees had fallen across and it was clear that from the few people that did drive this far, most of them had driven right over the top of them. 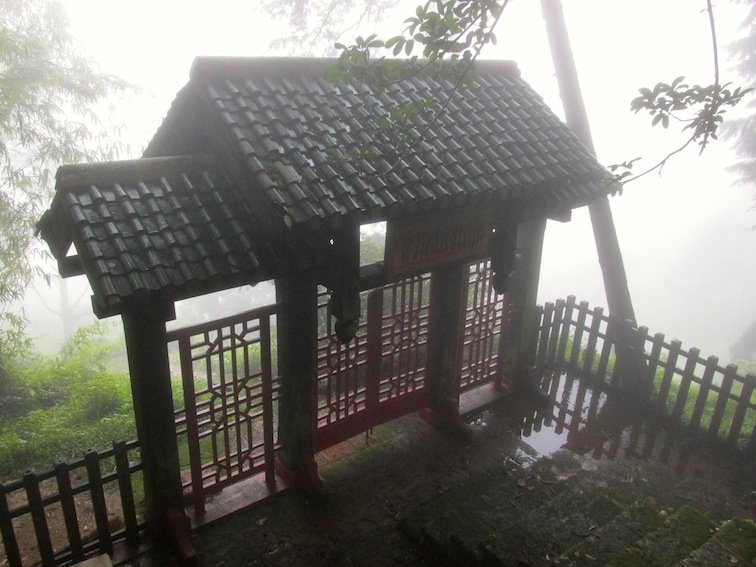 The entire environment was extremely tropical and in an almost constant state of dampness.  At first, I thought that it may be drier up top but that was by far the exact opposite being that this part of the jungle was constantly in the clouds.  Passing by a shrine and a few scenic points that had been horribly cleared out, I slowed the pace of what I had been driving and began to study the surrounding jungle with a little more detail. 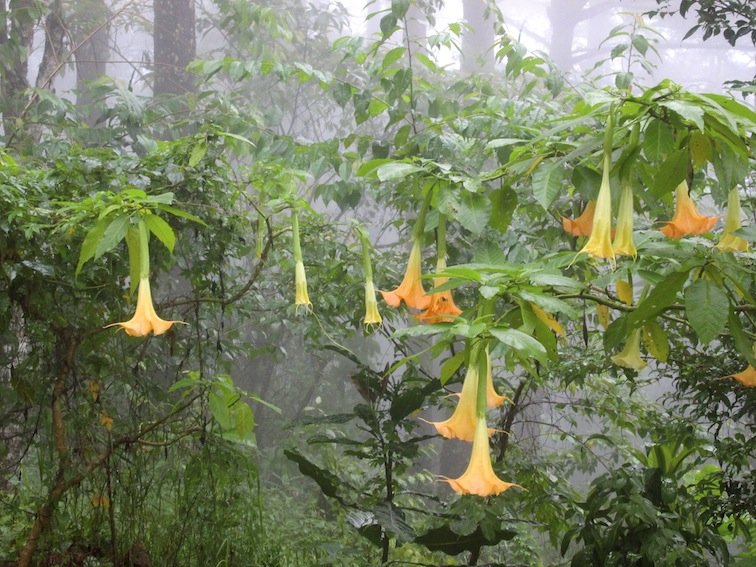 Brilliant yellow flowers in the shape of a dew drop grew in massive sizes, about 10 inches in length.  The leaves of the surrounding foliage became broader than they had been previously and the constant buzz I heard from the billions of insects seemed to turn into a rhythmical buggy musical.

It was a different world up here entirely and despite being really wet, cold and slightly hungry I was really enjoying myself.

Continuing the drive up the mountain I eventually ran smack into one of the two cloud villages that I had heard about back in the heart of Chiang Mai.  It wasn’t exactly what I had pictured as it was obvious they made their living quite regularly from the tourist who visited the area but was still worth the trip up.

Being that it was rainy and cold, I only saw two other people that didn’t seem to be from the region so the atmosphere that day was pretty authentic as the villagers talked amongst themselves and paid no attention to me unless I expressed interest in one of the many products they were selling.

The village itself was quite small, as expected.  You could walk through the entire thing visiting every show in about 20 minutes or so…maybe 30 if you really take your time.

A good tip for anyone who is visiting the village, there is an older woman selling a 750 ml bottle of local honey that was collected there on the mountain.  If you can handle that much honey, get it as I tasted some and it was REALLY good.  And at the price of only 150 baht, it was literally a steal! 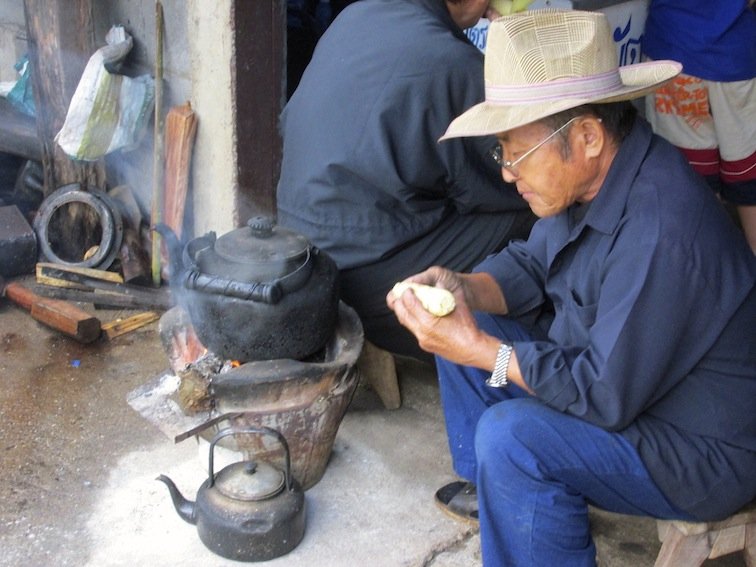 At the very end of the market was an old man eating a kernel of corn while overlook his cast iron kettle cooking over a bed of coals who collected money to see the “waterfall”.  It wasn’t anything that spectacular but for only 10 baht if you have nothing better to do it’s worth a bit of exploring.

Concluding the end of my trip there, I’m glad I made the investment of renting a scooter for visiting both the temple and the small village.  It was quite a treat as there were few tourists in the area and there was ample time to really talk to and get to know how the locals who lived their daily lives in such a remote area of Chiang Mai.  If you were to visit the area, I definitely recommend checking it out (even if only to learn to appreciate the warm weather when you retreat from the cool and cloudy rainforest above the city).

What’s one place in Thailand you find the most interesting?