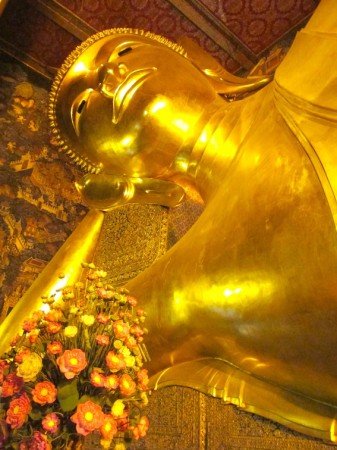 Nestled deep in the center of Bangkok surrounded by the magnificent buzz of the city lazily lies the Giant Reclining Buddha.  Although it’s close neighbor the Royal Grand Palace sits just next door, you’ll notice upon your visit that it has a different feel entirely.

Where as the Grand Palace is lined with hundreds of tourists looking to get that unique glance of the Emerald Buddha, Wat Pho hosts a relatively quieter environment; once you get past the main attraction that is.

While the monks walked around gave their blessings and smiled to their welcomed guests, I enjoyed my pleasant stroll through the towering temples.  With the raindrops drizzling down on my head, I couldn’t help to feel that same vibe you’d feel in a tropical paradise…sort of like that unique feeling as if you’d been relaxing in your own villa in Bali.  Except I wasn’t in Bali, I was in Thailand and extremely happy to be making that statement!

But after my visit to the temple, if I could give you one piece of advice, go there while it’s raining or early in the day.  This way you’ll beat the crowds and get many great & unique moments all to yourself just as I had…

The unique yet ancient texture of the entire vicinity was in very good shape.  You could tell that they were well aged but properly cared for the entire time.  Noticing the rain drops getting heavier, I rushed inside one of the main temples where the Giant Reclining Buddha was held. 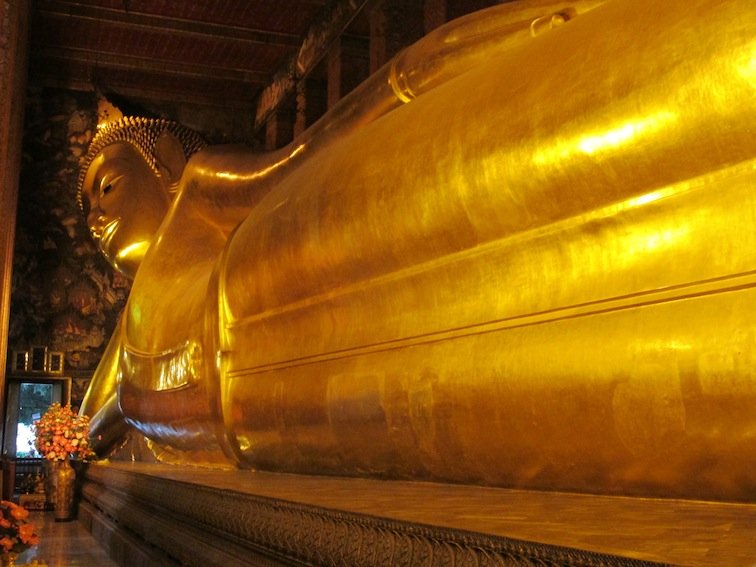 Taking off my shoes and slipping them into a small bag that was handed to me by some children, I resisted the urge to slide around on the floor like a ninja with my slippery socks and respectfully made my way to the impressive statue.

It was obvious the reclining Buddha was the main piece to the room as it took up much space.  I couldn’t help but to think that 3…no 4 large buses could easily fit inside of it!

A place to give thanks & wishes to Buddha.

Awestruck by its wonderful beauty, I passed by a few of the small stands where flowers were placed lavishly in commemoration for Buddha.  They were designed with a few colors of intricately designed gold lining, shiny velvet red paint and a beautiful white and grey stone in the center. 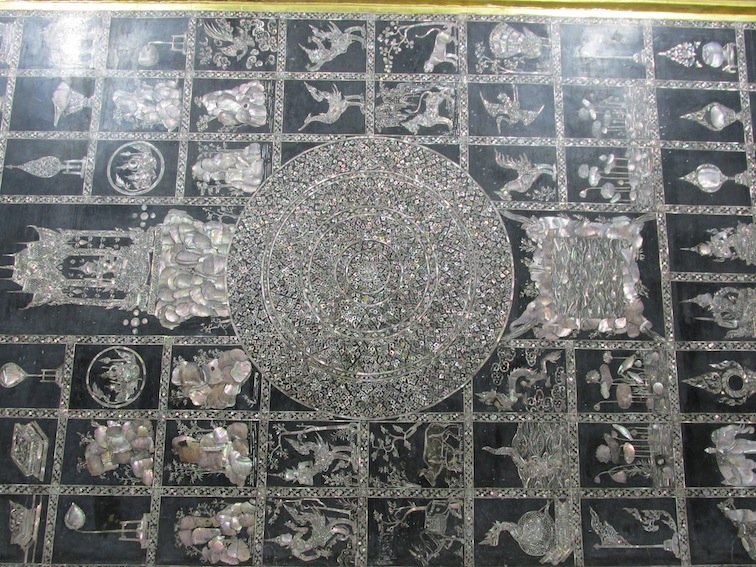 The foot represents 103 figures of Buddha.

As I passed by Buddha’s giant belly, down his legs and towards the feet, I noticed a section that was opened up in order for guests to take a nice picture with the Buddha.  That’s when I saw the drawings.  At the bottom of the feet were 103 figures that represents Buddha.  It was very interesting to see the forms at which the Thai people had believed Buddha taken form as in the past.

Rounding the feet and arriving to the backside of the Reclining Buddha, there were numerous metallic bowls lined against the wall.  Inside you could fined a variety of coins of different sizes.  I noticed the locals placing one coin in each bowl all the way from the beginning to the end as a “gift” to the Buddhist religion.  Finally getting to the other side of the U-shaped path around the Buddha, the rain finally  began to let up so I made my way outside, put my shoes back on and explored the remainder of the massive temple. 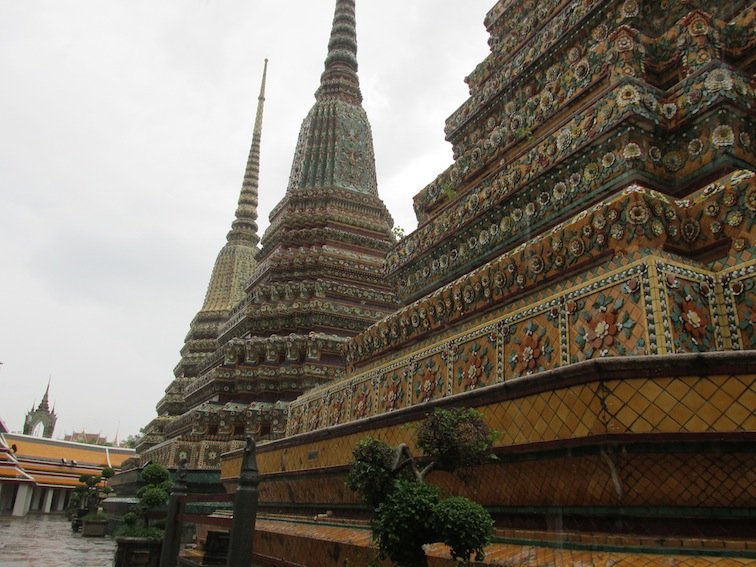 Beautiful water features, figurative statues and the flora & fauna made for a beautiful scene as I walked around on the relatively uneven stoned ground.  It was nice having the small & constant drizzle of rain as it allotted free space to think for there were few tourists in the area.

Many tall temples were were covered in colorful ceramic flowers being broad at the base and reaching to a point at the top as if they were directing a finger at the sky in a steady staircase fashion. 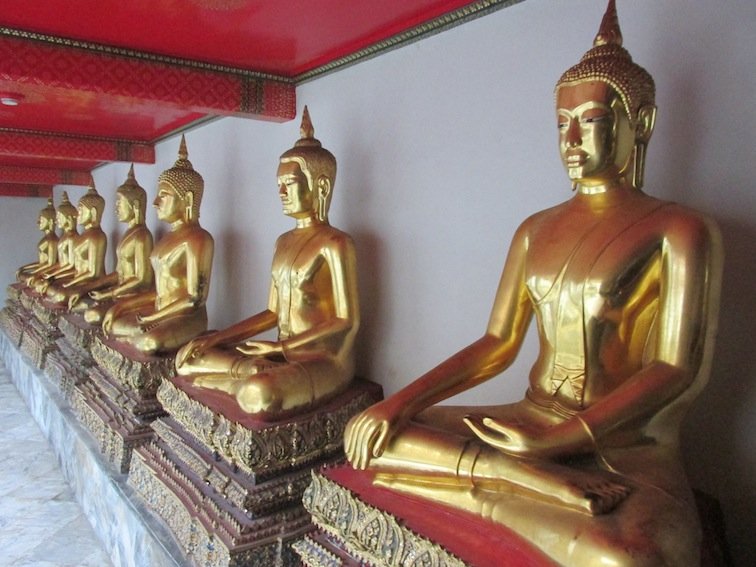 These statues circumference the entire inside of Wat Pho’s walls.

Surrounding each of the courtyards was an overhung wall with several gold colored meditating figures, all in the same posture, as if they were united in unison to meditate with the giant temples.

Artists working on the statues.

As I walked deeper into the temple I noticed a few of the people working on each of the figures and only then did I come to appreciate how much detail was put into not only this entire temple, but into each individual statue as well.

It was nice sitting with and watching them place, piece by piece, all of the ornaments that collectively came together to a beautiful work of art.  Occasionally I would pass by a monk or two but never realized that they were heading to the same shrine for a group meditation before the base of the main temple in the middle of Wat Pho. 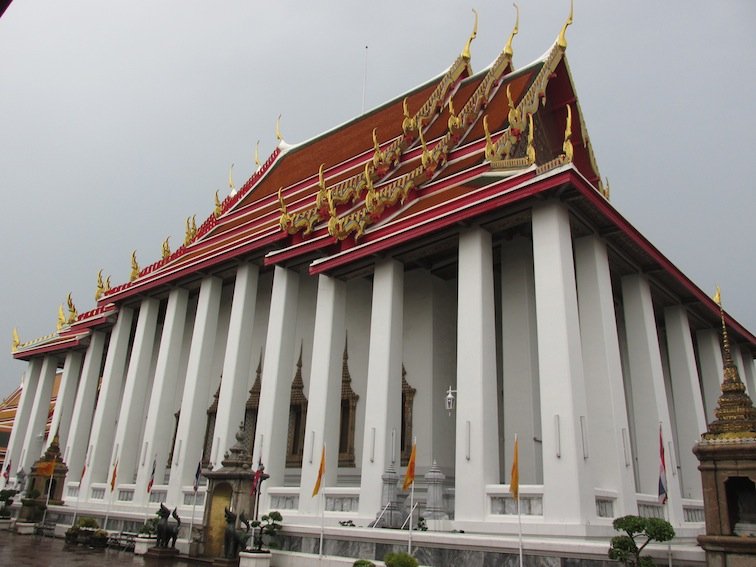 The main temple in the middle of Wat Pho.

Following their lead, I walked even deeper into Wat Pho and discovered several of the monks and a few locals all beginning to meditate together.  Joining in with the peaceful group, it was a powerful and all inspiring sensation to be a part of this group meditation.  The only time I had ever felt an energy this strong was while I meditated with Tibetan monks who visited a ski town I worked at out in Aspen, Colorado. 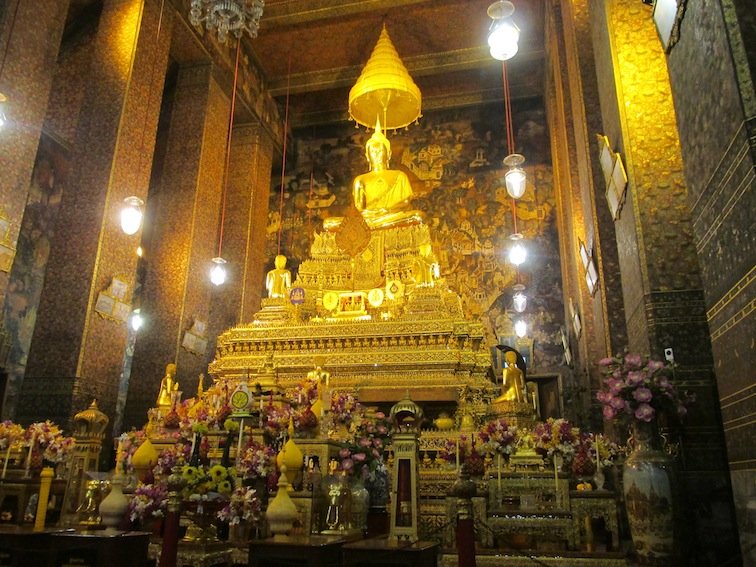 It’s impressive inside the main temple.

After meditating for quite some time, the time flew by and I awoke in an almost blissful state.  Giving thanks for the wonderful experience, I waited for the temple to empty (out of respect), took a few snapshots of the shrine and walked out into the quickly fading day.

Overall the experience I I received while visiting Wat Pho was unlike any of the other temples I’ve visited in Bangkok.  I would have to say that it’s probably one of my favorites being I was able to take my time and truly enjoy the entire site.  It just goes to show you that slow travel, in my opinion, is the best travel.

What’s the most magnificent temple you’ve ever seen in Thailand?