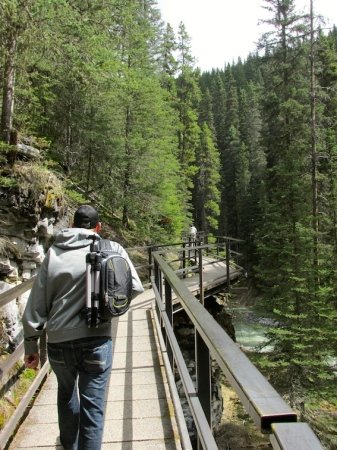 Directly after road tripping West of Alberta towards the Canadian Badlands, my friends and I made a terrific trip out towards Banff National Park.

The scenery changed drastically as we left the hustle & bustle of the city and drove over the rolling hills of the grasslands, eventually leading to the foothills of the Rocky Mountains.

Once we drove between the first of many towering rock walls, I quickly realized that these mountains were a bit larger than the ones I’m accustomed to back in Colorado.  Even the steep cliffs up Independence Pass near Lincoln Creek would seem to sit in the shadows of these monsters!

Quickly falling in love with the surrounding landscape as we took the small, winding forest roads towards Banff’s Johnston Canyon, I just couldn’t wait to hit the trail and take a look at the terrain from a much closer and personal point of view.

Join Ali, Tom & I as we explore a fair novice hike with a big payoff of numerous waterfalls, wildlife sightings and breathtaking natural features as the rushing waters carved it’s way over the years deep into the heart of Canada creating Johnston Canyon! 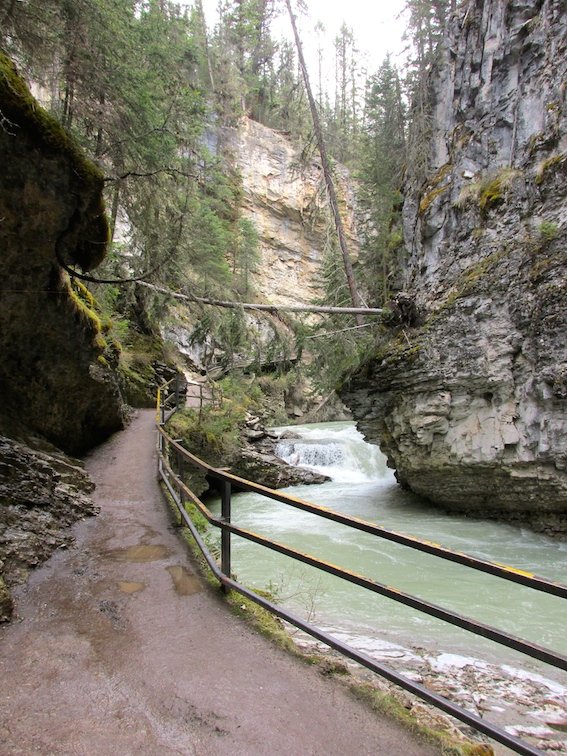 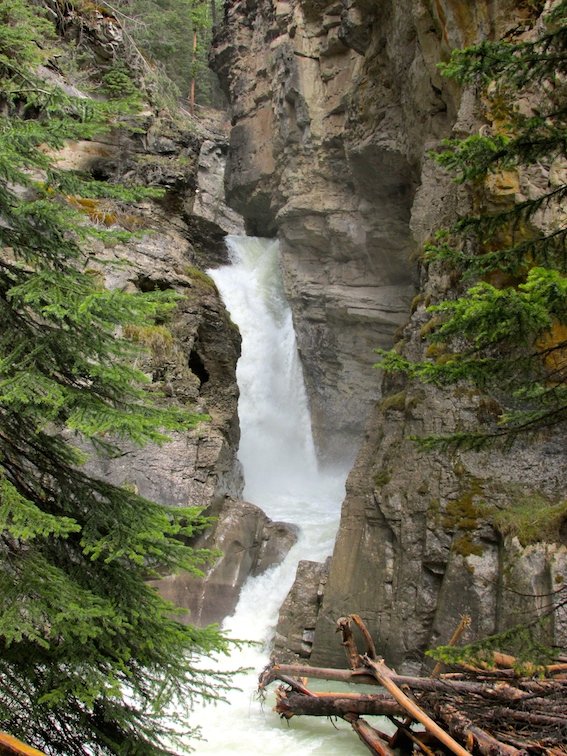 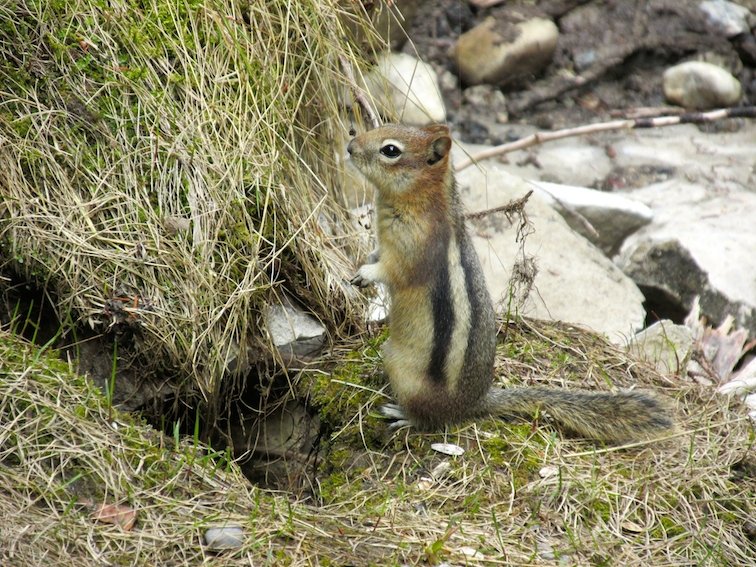 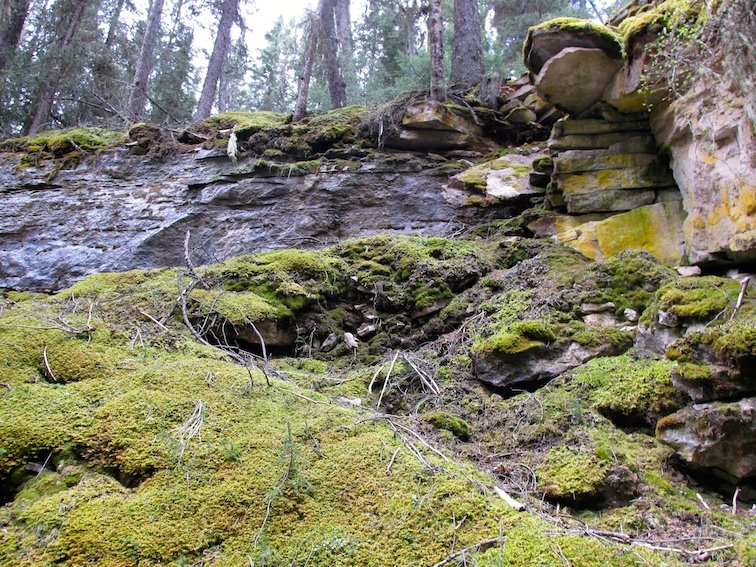 The land seemed almost surreal and mystical in between the rocky walls.  Moss grew in abundance and little chipmunks scattered everywhere as if Snow White had called her little critter friends on to greet us.

The trail began at the parking lot and followed alongside the creek for the length of the trail.  As we left the open forest floor and walked into the canyon, the atmosphere quickly transformed into a cool & misty world where bits of snow were still collected in small clumps where the sun had not yet been granted access to warm the terrain. 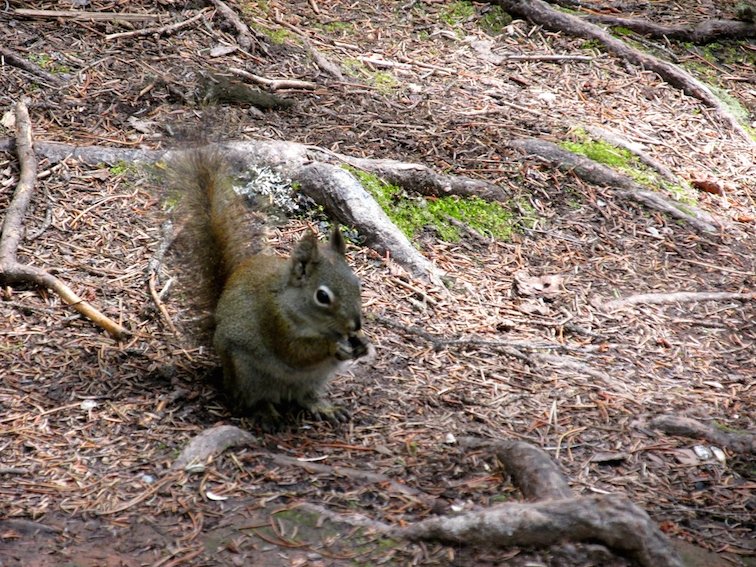 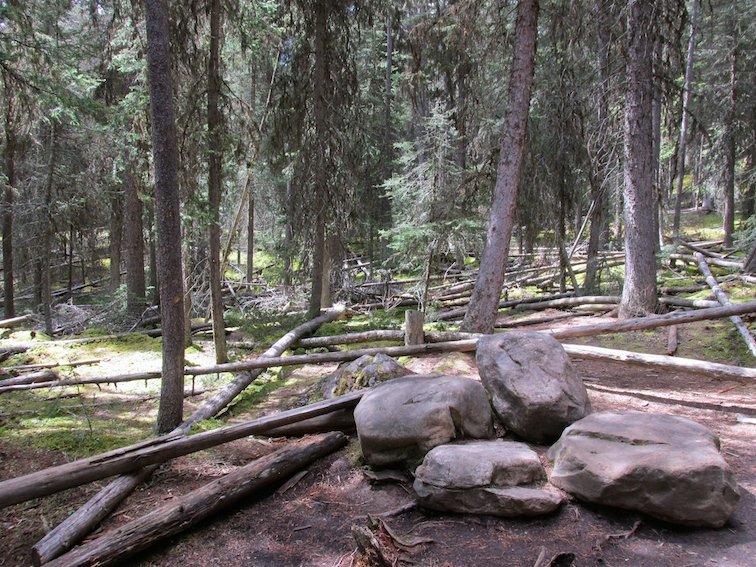 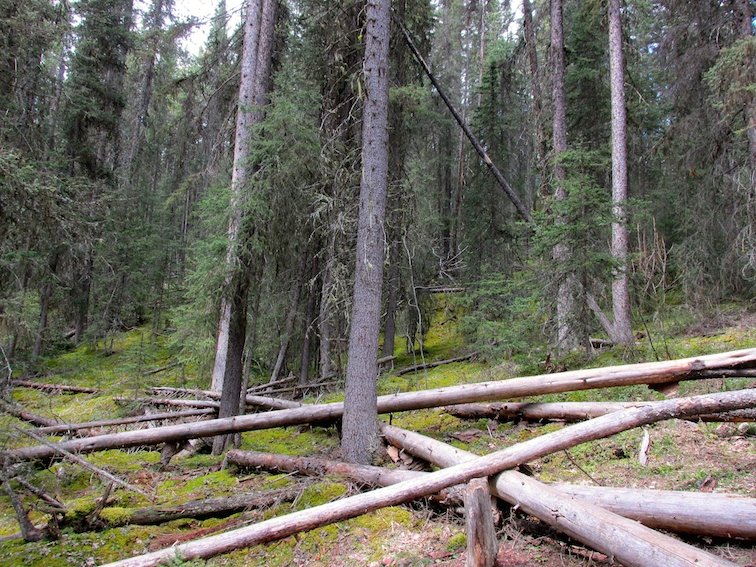 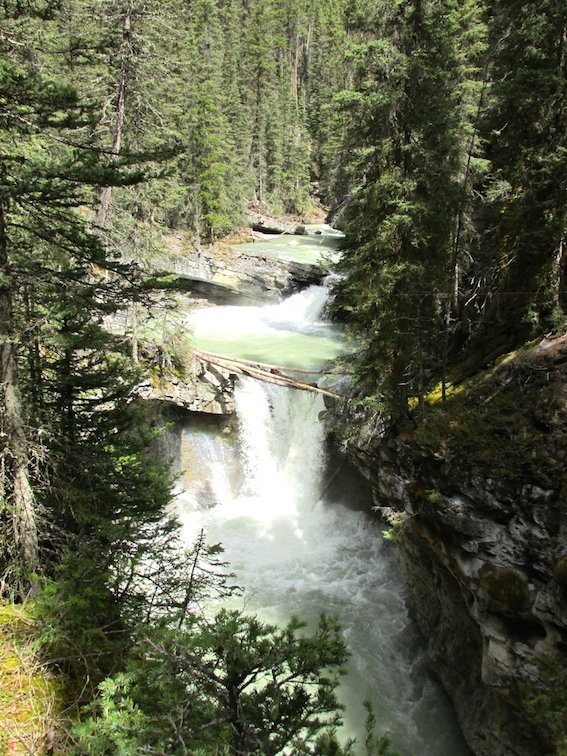 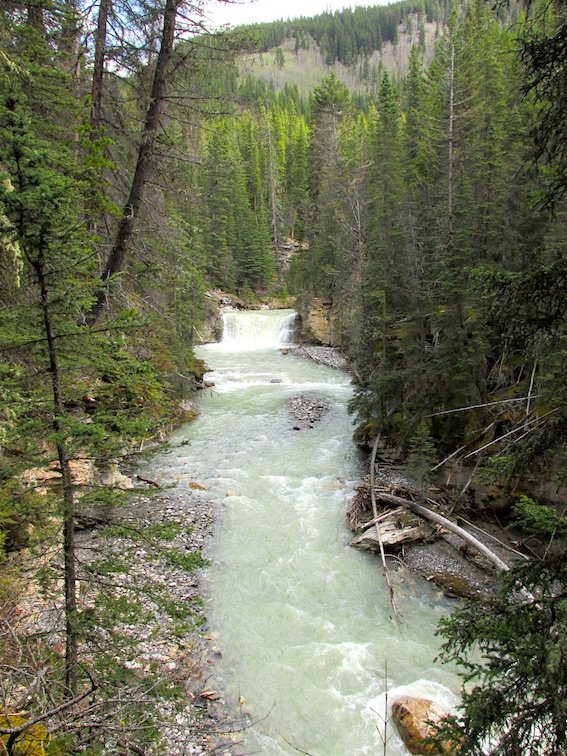 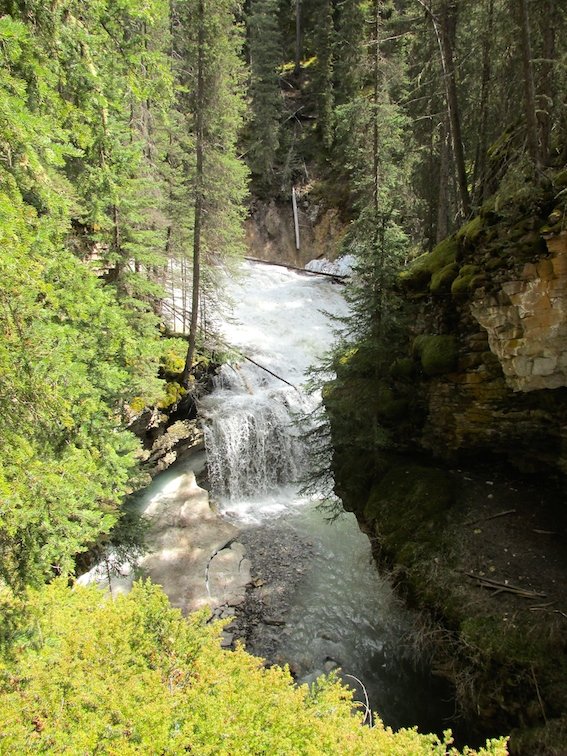 While hiking the trail that swerved in and away from the riverbed, you could visually see the effects the rushing water has had over the years on the resistant limestone.  As the water plummets from the top of the rock wall, it drops into a small pool that gradually eats away at the limestone.

Eventually this causes the waterfall itself to move farther and farther up the mountain over the course of time, in a sense, migrating into higher elevations.  Apparently during the winter, when the face is frozen, the water still runs below the ice but it’s so thick that you’ll find locals hiking into the area to climb on these massive structures.

I bet that’d be quite that sight to see! 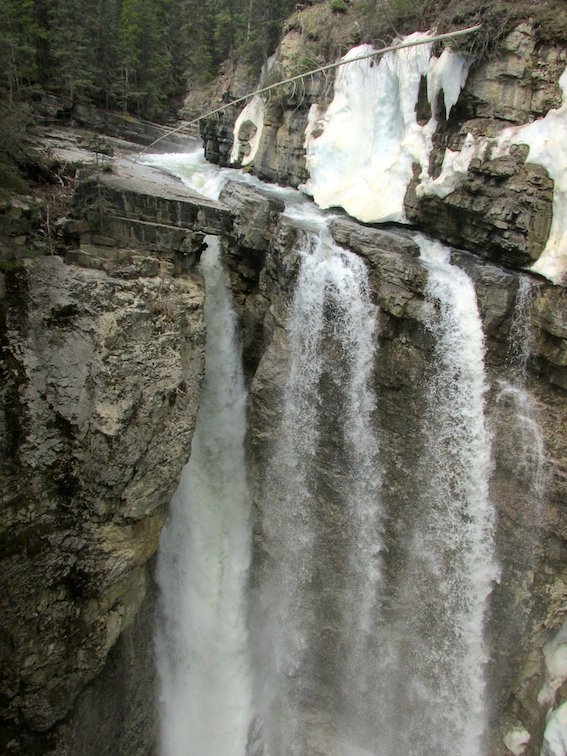 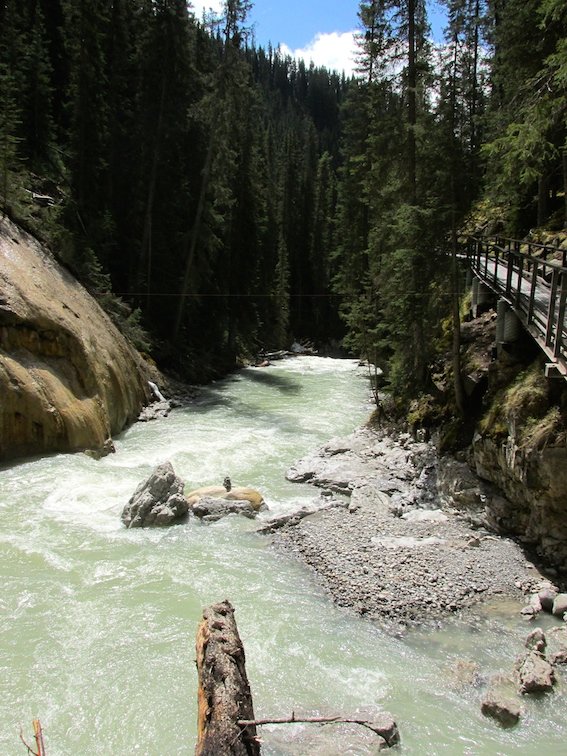 Continuing the hike farther up the mountain, you could see many small varieties of wildlife including the native chipmunk, Red-backed Vole & the Dark-eyed Junco.  If you payed close attention, you could even get glimpses of a small bird called the Water Lover.

I found this one animal particularly interesting because they would plummet off the rock wall deep into the freezing waters where they would clammer along the slippery riverbeds searching for bugs and other small creatures.  Apparently, these birds would even use their wings as fins to chase small fish!

And to answer your question, yes, they even do so in the winter time.  They simply dive into the areas with faster currents that remain unfrozen and clamber below the frozen terrain…simply amazing! 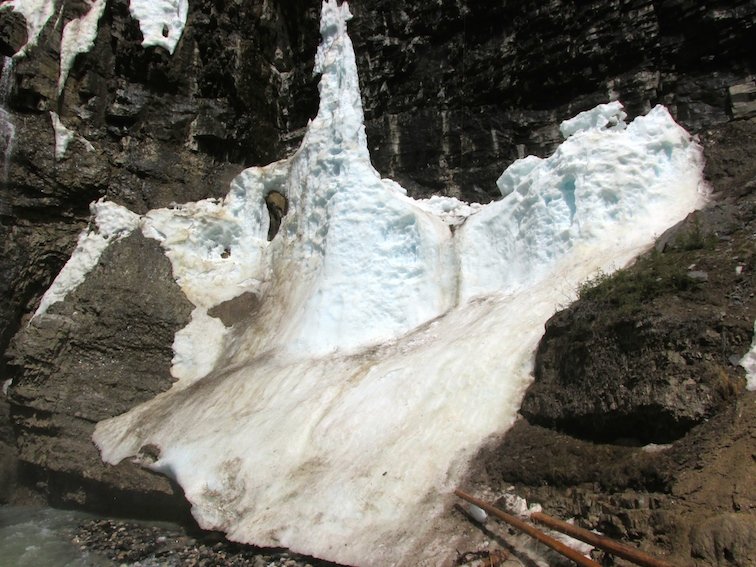 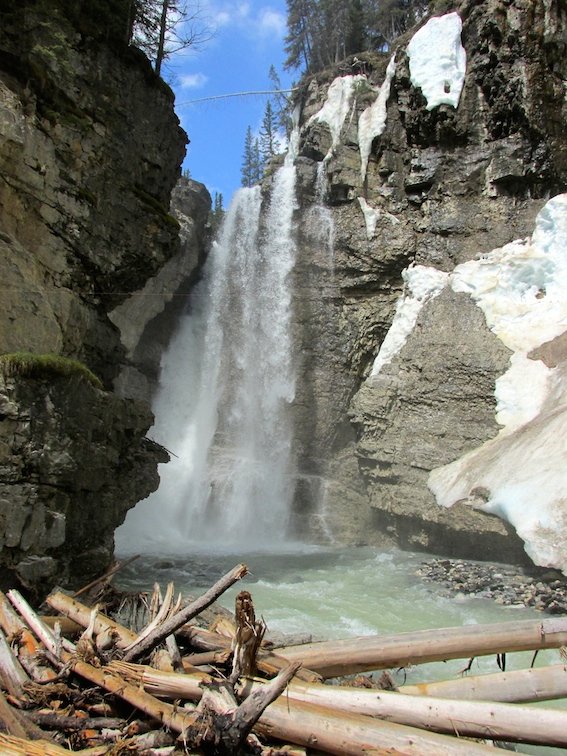 Once we finally made it to the top of the trail, we had hiked a total of 2.7 meters and climbed 120 meters in elevation.  The main waterfall was breathtaking, leaving a heavy mist in the area that, had we delayed leaving for too long, we would’ve easily been drenched.  These were much different than the falls I saw underground in Nepal or the waterfalls farther East in West Virginia.

Deciding to turn back to get some lunch, the trail continued for another 1-2 hours further uphill into a much steeper and technical climb.  At the top we would’ve been met with the Inkpots (small blue-green pools of water created from cool springs that bubble out of the bedrock).

But, alas, that was for another day as we weren’t quite prepared for the climb.

What’s your favorite thing about Canada?