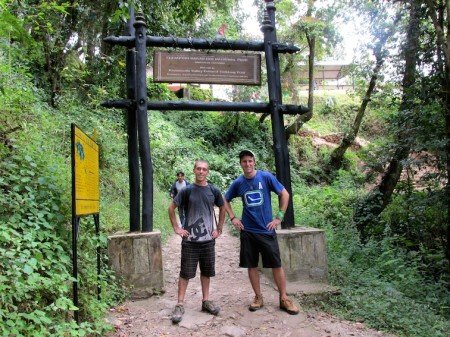 Located in Nepal’s mid-hills on the northern fringe of the Kathmandu Valley, Shivapuri Peak is a bit of a strenuous days hike away from the small gated entrance of Shivapuri National Park hiking trail.

I’ve always been accustomed to hikes; after all I was based out of several very popular areas for hiking such as The Ocala National Forest and Colorado’s Independence Pass, but this hike was almost more than I could handle…almost.

But instead of getting into the steepest and most treacherous part of the hike, lets start from the beginning of the park entrance itself and work our way up through the Himalayan backcountry, indigenous villages and unnamed waterfalls. 😉 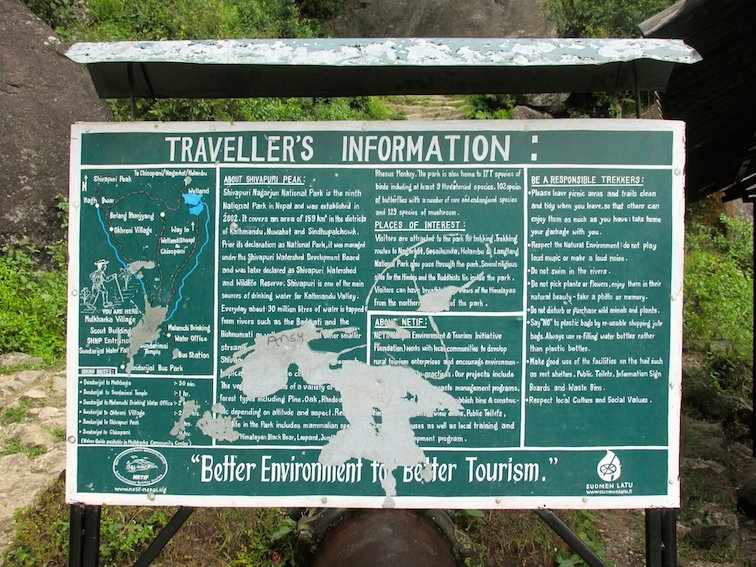 My friend Tashi, owner of Alobar 1000 (the hostel I was staying at during my trip in Kathmandu) worked as our guide through the jungle and he did a remarkable job showing us some off the beaten path trails that most people don’t get the opportunity to see.

To begin the hike we were dropped off by one of his friends at the entrance of the park.  Passing by a few local restaurants, shops and small houses, I picked up a couple bottles of water then hit the roughly aged concrete trail that would eventually lead to the steep ascent past a couple of waterfalls and on up the mountain. 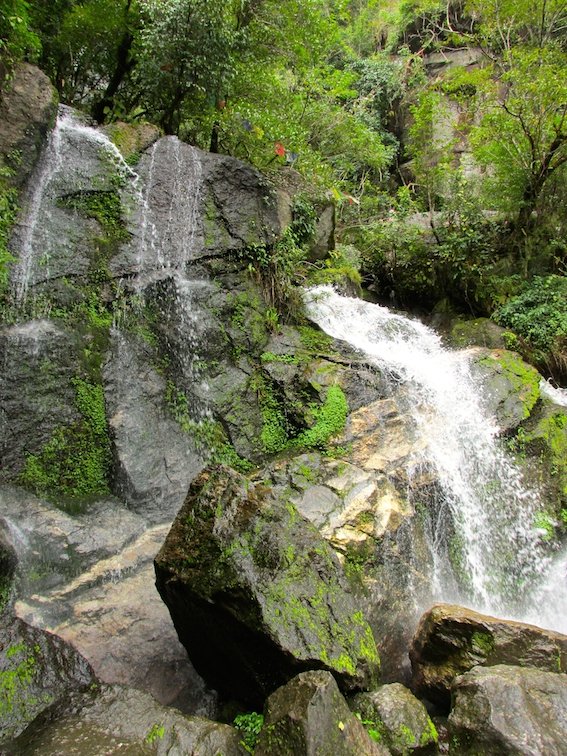 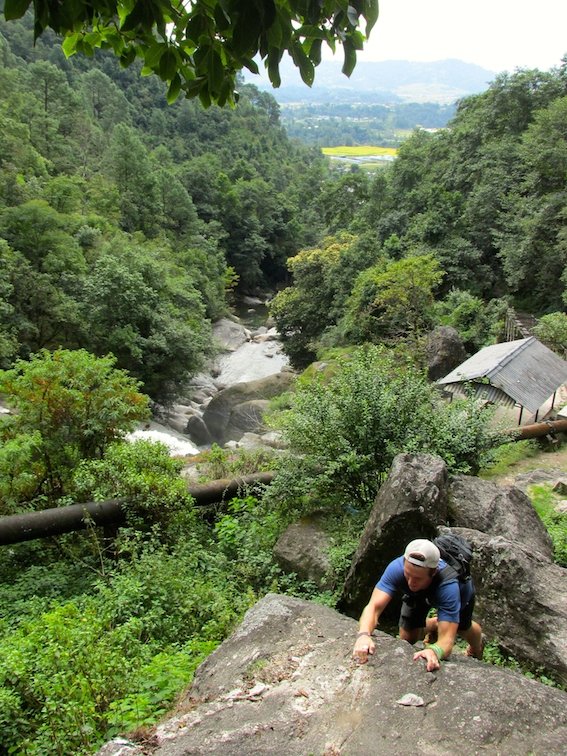 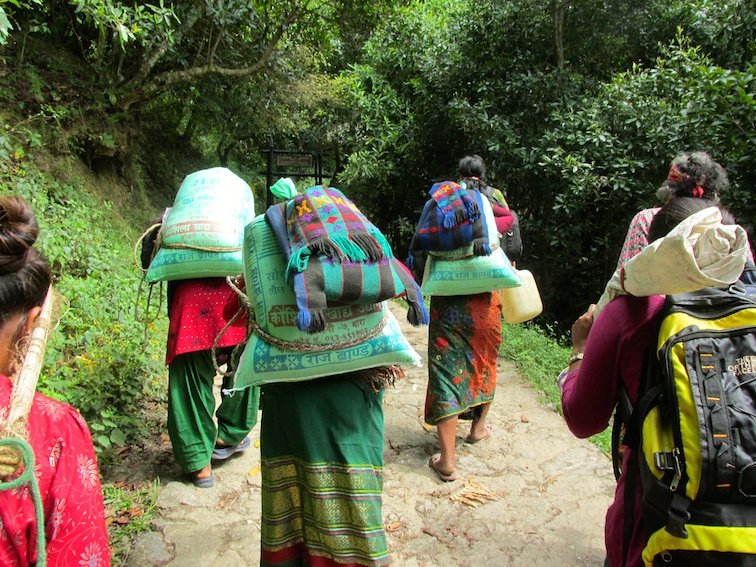 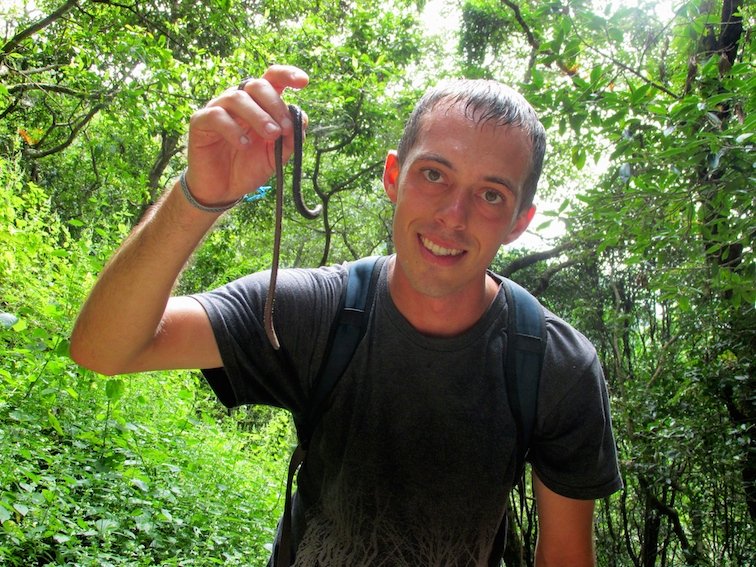 The hike going up was beautiful; I passed by breathtaking views of Kathmandu Valley, dipped my head under the waterfalls for a quick & revitalizing cool-down and even socialized with a few of the local village women who somehow managed to carry bulky supplies from the city back up the mountain to their homes.

Once we reached the top of the stairs and the entrance to the Kathmandu Valley Cultural Trekking Trail, the other guys & I turned in our passports to get logged then continued on the trek to the peak of Shivapuri National Park hiking trail.  This was something normal for all visitors coming in/out of the trekking trails that way if something were to happen they had a way of tracking you down. 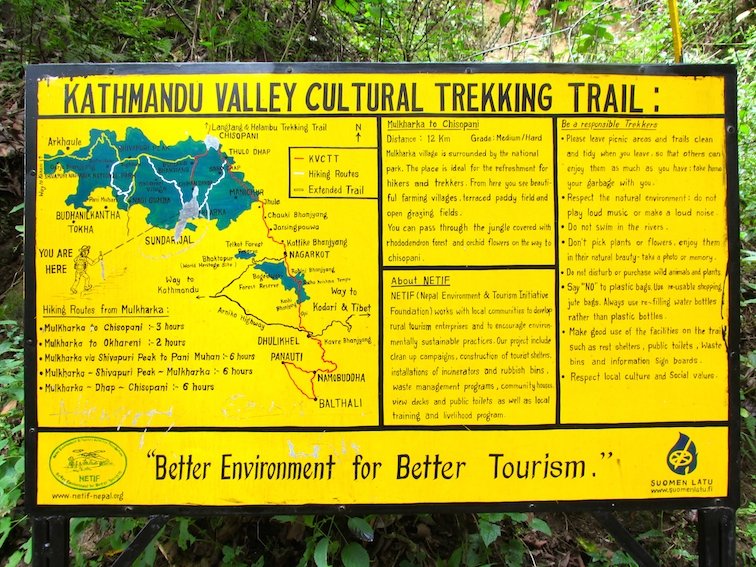 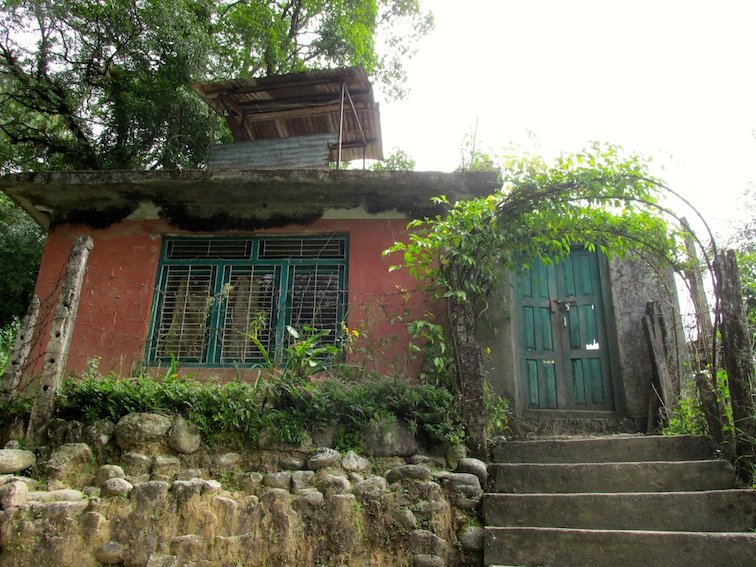 Once everyone passed through the park gates, we began to see a much simpler way of life as the villagers had originally lived them.  A few herds of goats were scattered here and there as well as an occasional cow grazing on grass.

The homes, roughly built from stones & mortar that the mountain had supplied, were stained a rustic orange color while the aged tin roofs held out the recurring afternoon showers that seemed to come on a daily basis. 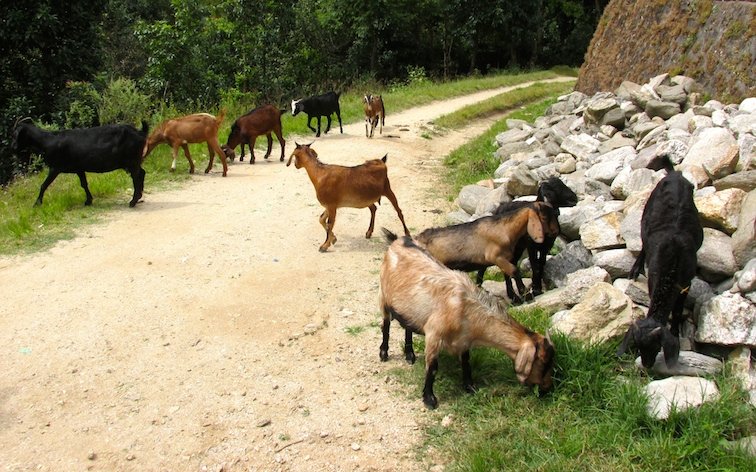 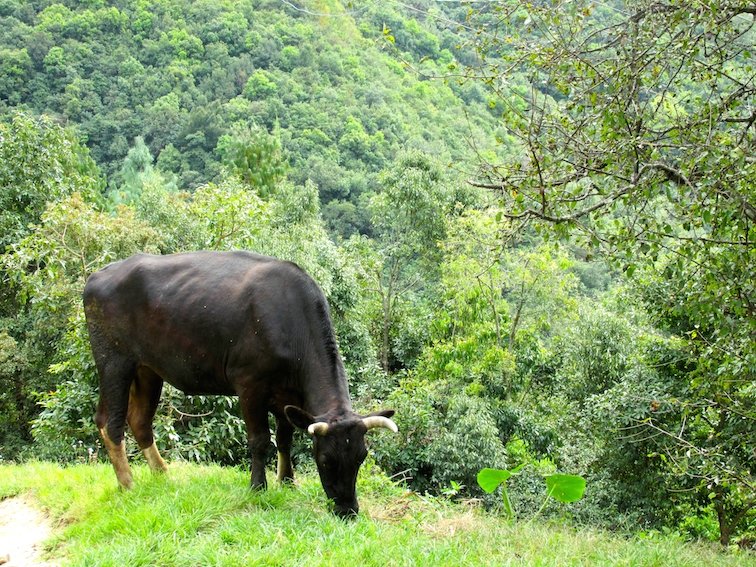 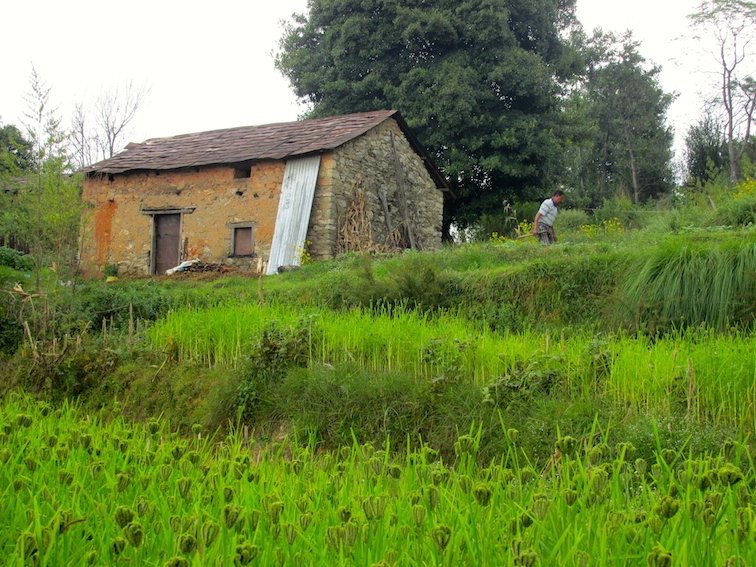 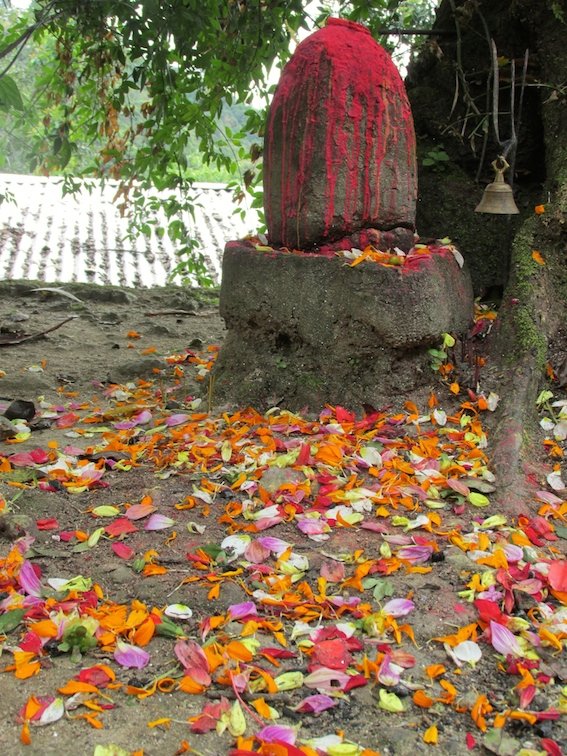 Occasionally we would pass by small statues along the Shivapuri National Park hiking trail where the locals had practiced their religion.  At most locations, flower pedals were laid out before the statue while a red paste seemed to drip down it from previous rituals.

As we continued the hike up, we passed by a plethora of open fields growing a variety of crops including rice, tea and marijuana.  It was one of those things that kind of threw me for a loop as, coming from the states, I’m not really used to going for a hike in a National Park and passing by 100 marijuana plants at a time.

But for Nepal, this was the norm and I loved the freedom it provided! 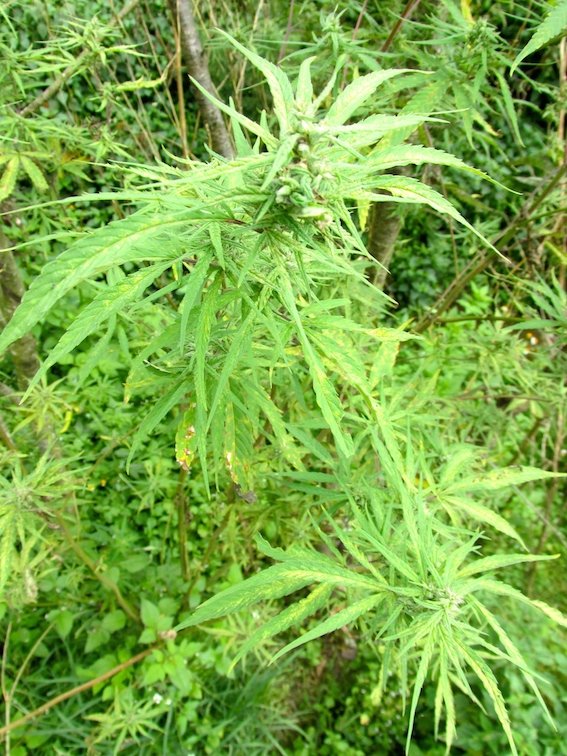 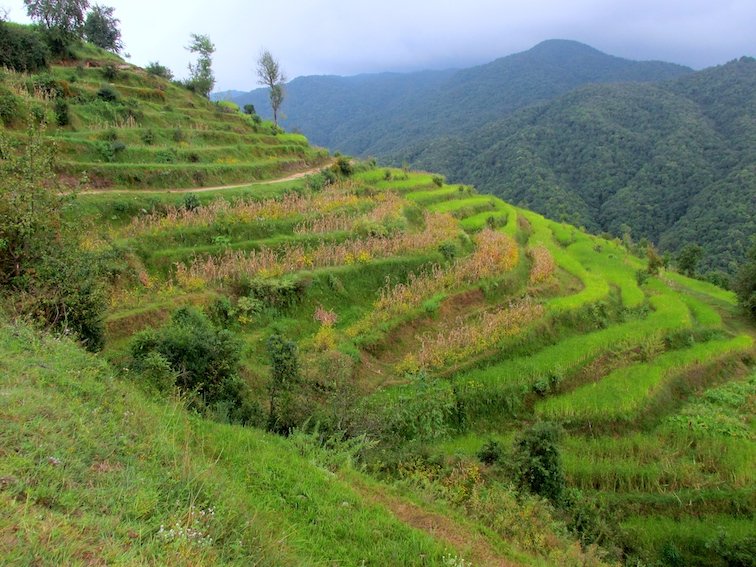 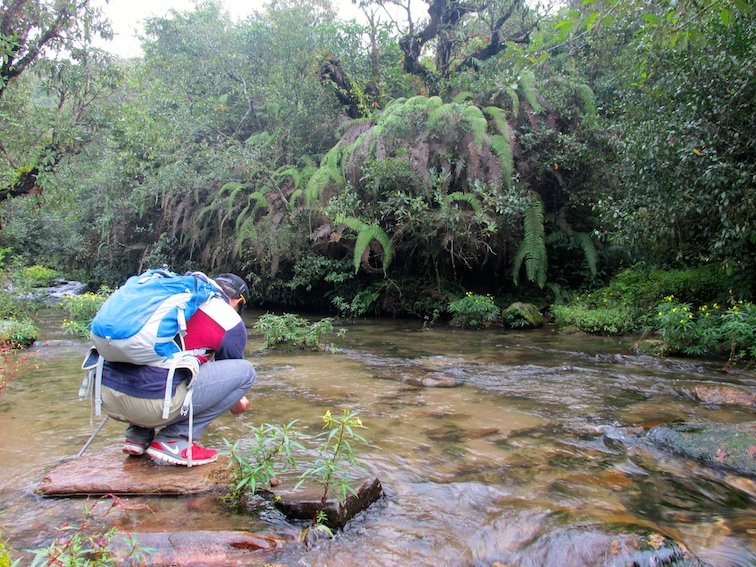 At Tashi’s recommendation, we stopped for lunch at one of the village houses and gorged ourselves with the Nepalese national dish of Dal Bhat.  Included in the meal was steamed rice, a cooked lentil soup & a side of green vegetables that I believe went by the name of tarkari; all cooked over an open fire.

The food was about as local as you could get, came in massive portions and was absolutely delicious!

Saying our goodbyes and giving thanks for such a filling lunch, we continued on up the mountain to less steep trails as they ran parallel to the creek and eventually turned into a very rough dirt road that hadn’t seemed to have been used in years. 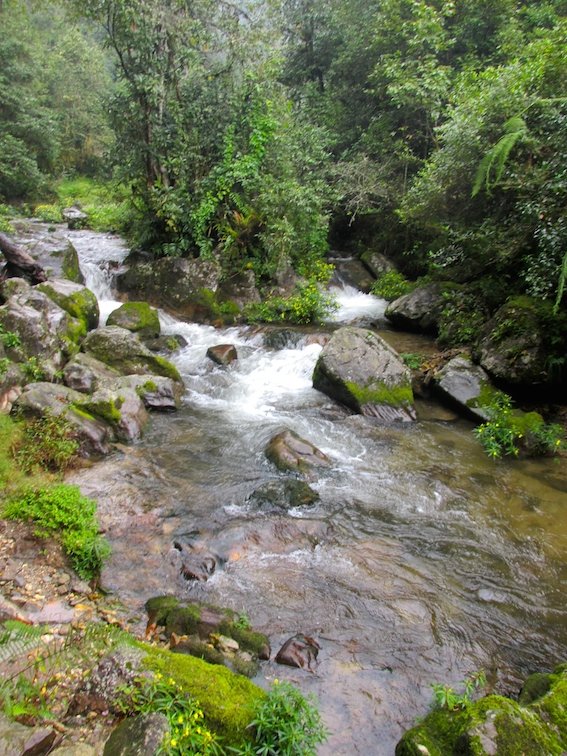 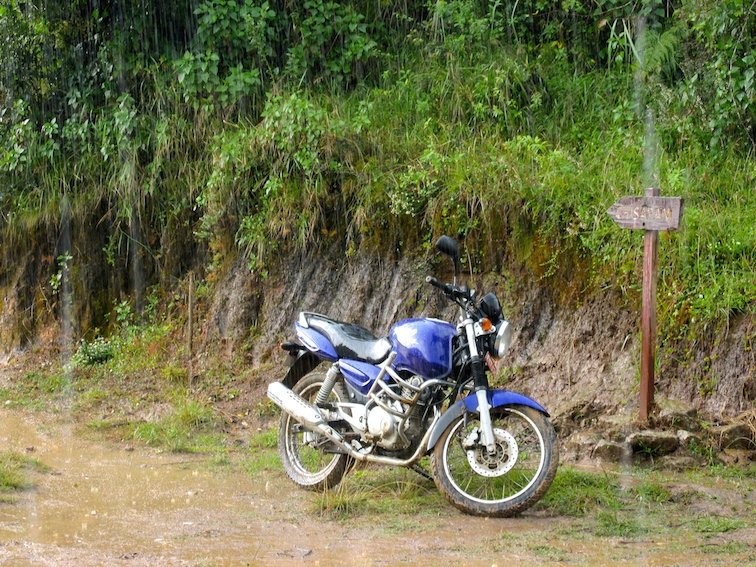 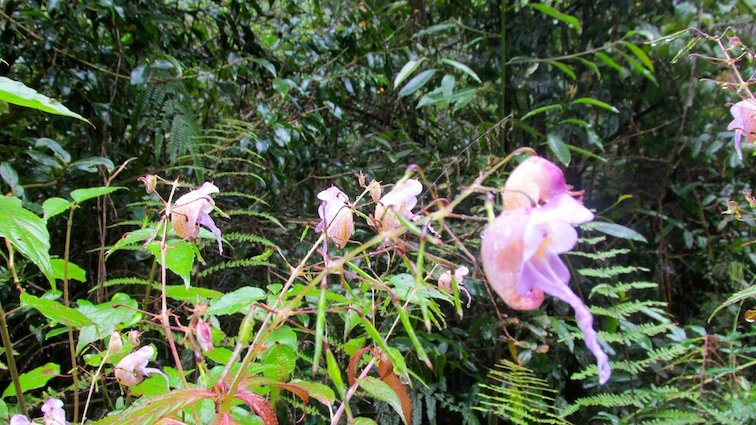 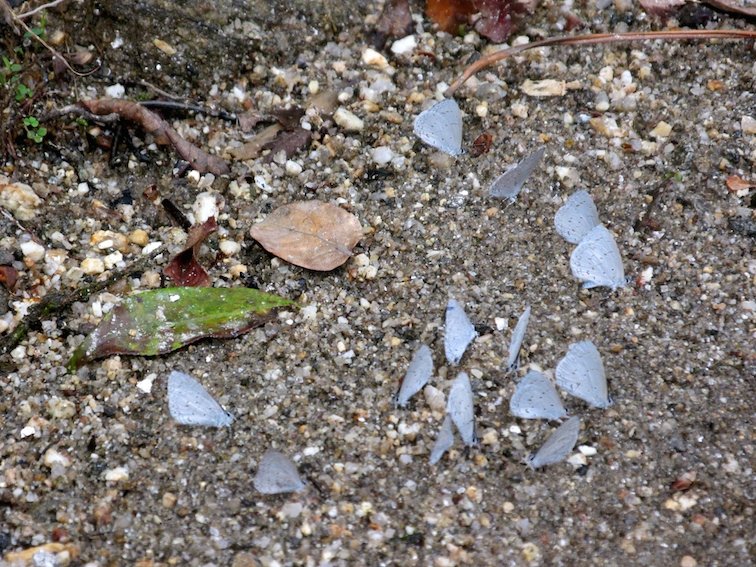 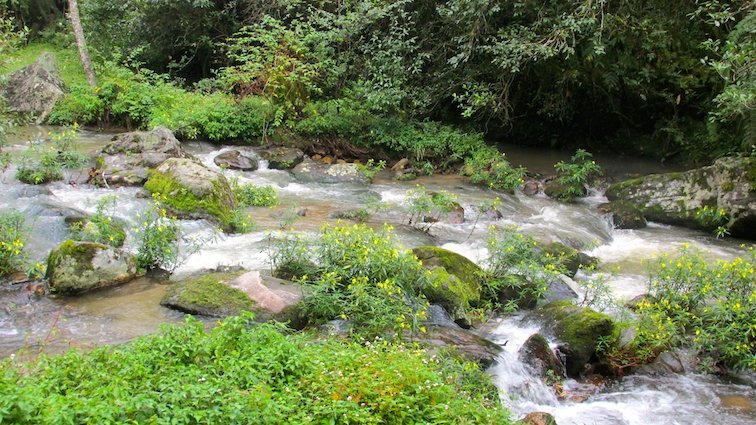 The higher up we went, the more tropical & lush the vegetation seemed to get.  Fresh green algae grew along the rocks in the creek and yellow flowers showed off their beauty as they blossomed in the sun.  Meanwhile, small baby blue butterflies that were speckled with dark blue dots floated from place to place until it started raining; then we found them huddled in groups on the ground waiting for the storm to pass by.

Once we reached the top, the weather seemed to clear up in just enough time for us to get a glimpse of the view we came all this way for: Kathmandu Valley.  You could see for miles, even on a cloudy day.  The air at this altitude was fresh & crisp although still warm which made for perfect conditions in my book. 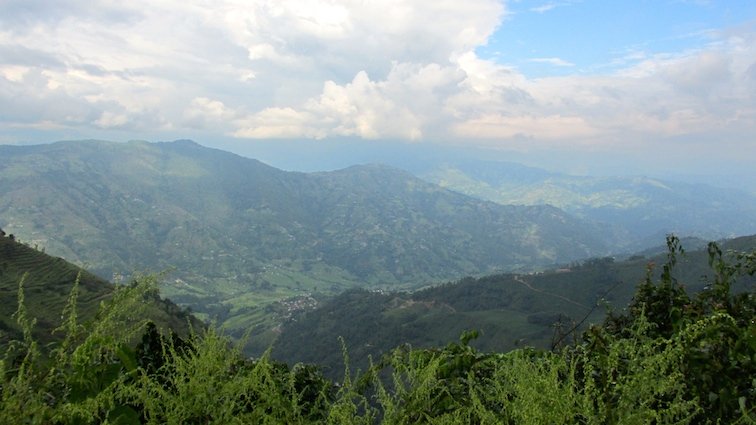 Most of us could easily feel the elevation as the peak of the Shivapuri National Park hiking trail sat at 8,963 feet.  Although my time hiking in Aspen had prepared me for the hike as well as my recent trip to the base camp of Mt. Everest, it took a noticeable amount of extra effort to breathe since I had been hiking nearly the whole day.

Taking in the view just a little while longer, we began to make our way back down the mountain apparently taking a different path than what we had originally used coming up.  We actually had just enough time to swing by another one of Tashi’s friend’s homes to enjoy afternoon tea.

I think what I remember most vividly was the adorable little girl who just kept standing there eating her candy and giggling as we sat there sipping our fresh black tea. 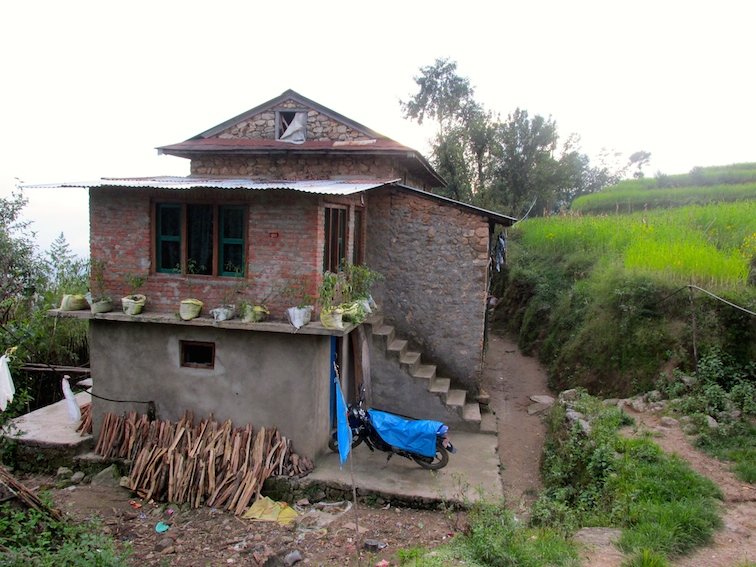 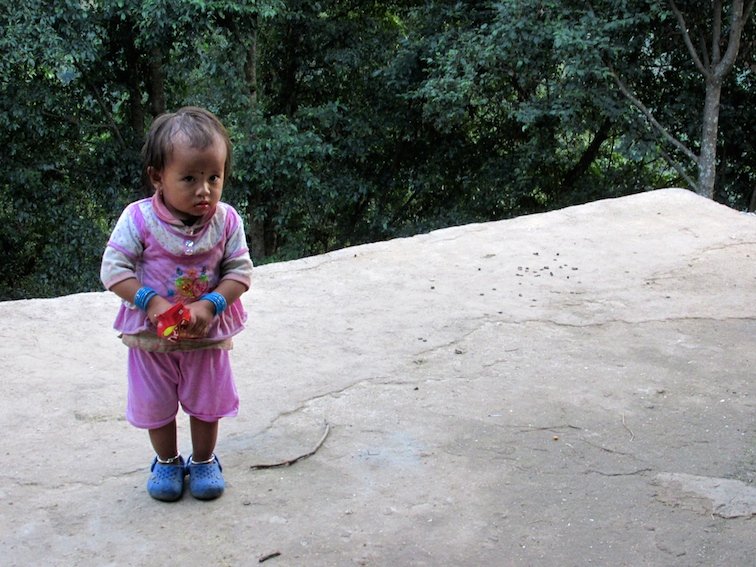 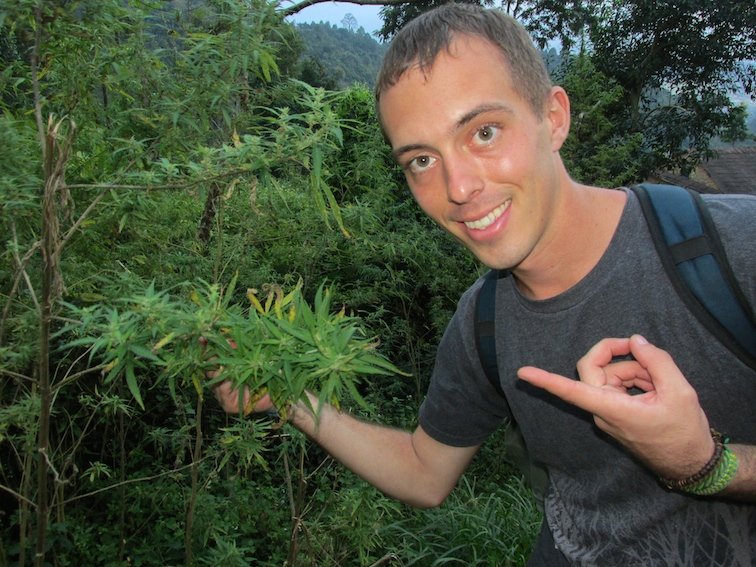 As the sun began to set, we continued our way back down the mountain passing by a few monkeys and over a small damn.  All in all, the hike was extremely tiring but well worth the trek.  I always find it exciting to get involved with the local culture, trying their food, witnessing the daily lives they attend and even sitting down and enjoying a cup of tea with them.

It’s moments like this that make you realize, even if you don’t speak the same language or have a way to communicate clearly, both of you can come to the same understanding in certain moments of life.

Have you ever been or plan to hike to the peak of the Shivapuri National Park hiking trail?