Hiking the Ocala National Forest in Florida: Part I 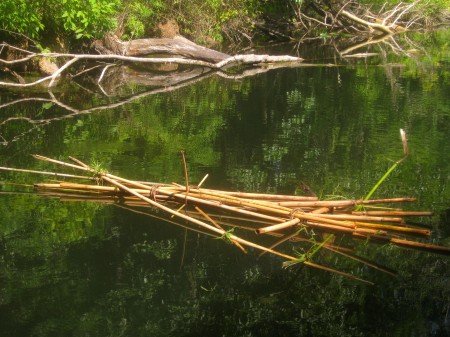 It’s morning and a beautiful one at that.  I awoke in the midst of the Ocala National Forest, listening to the sounds of light birds chirping, frogs croaking and lizards playing in the trees.

What a great day to be hiking in Florida.

It was nice getting out of the regular hustle & bustle of the city and into nature.  Sure it’s nice shopping for new toys, going to the beach and playing golf every once in a while, but sometimes you just have to escape.

The sounds of an occasional fish jumping in the river reminded me of the line that I had sitting in the river and left me in great hopes that we caught breakfast over the previous night.  The air was cool and crisp; perfect for the starting of another fantastic day.

As I got dressed and unzipped my tent, my attention was brought to the river where my fishing line was wrapped up in the bushes and low lying trees overlooking the river.

I yelled to my fellow backpacker Chaz, a laid back hippie looking dude that I had previously met 3 days before.  Scrambling down the entangled roots, I carefully leaped for the line and began unentangling the rat’s nest from the low lying trees.  To my surprise, there was a 3-foot alligator gar on the end of the line and boy was it mad!

Anxiously holding onto our morning breakfast, I glanced back to see Chaz making his way down to the river and handed him the end of the line.  While Chaz kept the line tight, I made my way further out onto the overhanging palm tree, unentangled the line in 2 more spots and carefully grabbed the alligator gar behind his gills and pulled it out of the water. 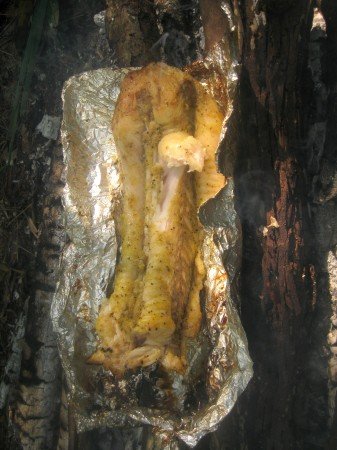 After successfully cleaning the alligator gar, I cleaned my multi-tool knife, threw the guts into the river for other wildlife to feast upon, and began to season this beautiful cut of fish with some natural seasonings and wrapped it in tin foil.

While Chaz started and stoked the fire, I grazed the surrounding site for edible flora and fauna but returned unsuccessfully with only a few Resurrection Ferns to nibble on.  By this time, the fire was prepped and we were ready to cook.  Allowing the fish to cook for about 20 – 30 minutes, we prepped some chicken fried rice, rinsed in the river and headed back to eat brunch.

By this time brunch was done and it was time to eat!  Quite nervous as this was our first time eating alligator gar, we skeptically tried our new meal and as it turns out it wasn’t half that bad.  It reminded me of fish or striped bass and had the contingency of snake, but slightly chewier with a slight hint of oak from the wood that we cooked it with.

The Adobo Seasoning was a nice touch, but I had wished a brought along a broader selection of herbs but overall we nodded in approval as we ate our meal.  After finishing up, it was time to pack our backpacks and explore the road that lies ahead of us.

Swimming the Silver River in Ocala

Remembering a thick bunch of bamboo I found earlier while grazing, we decided to build a small raft to hold our gear and make our way down the river.

Now picture this: the two of us are out in the middle of nowhere, our gear is wrapped up in a white tarp and floating on a bamboo made, triangular raft going down the river.  We simply swam alongside the raft in waters infested with alligators, alligator gar, water moccasins, and alligator snapping turtles.

We were surrounded in a tropical Eden, with a plethora of flora and fauna looking down upon us.  The land was as natural as it had been in Northern Laos while the wildlife flourished in its natural habitat.

Fish examined our every move as we swam by and even began tickling us as they nibbled at our toes.  All the birds seemed to enjoy our presence as they were singing about us to their mates.  The water reminded me of the air when I first woke this morning, just slightly wetter and at a cool 72 degrees Fahrenheit kept us quite relaxed in the blistering summer sun. 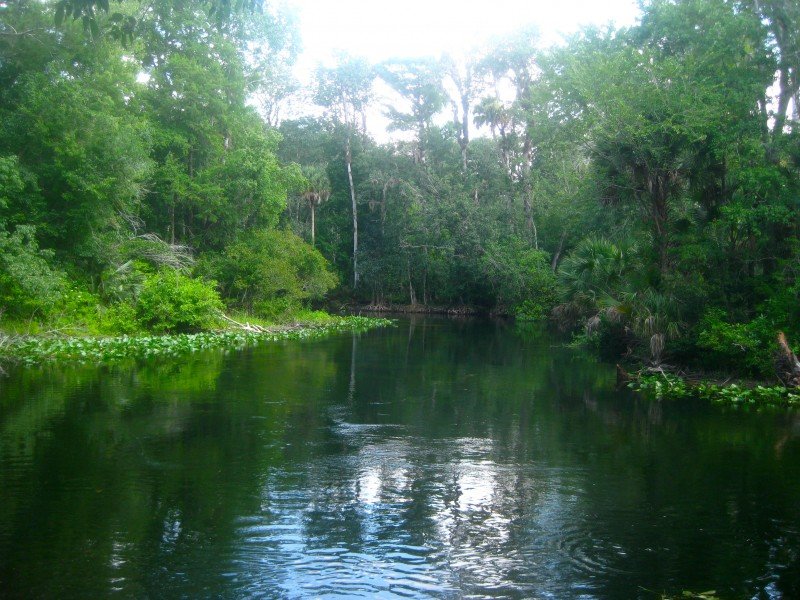 As we swam down the Silver River, we happened to come across two young men fishing and a few kayakers.  Looking at us with a curious eye, they moved on down river but not first chatting with us about potential campsites further down river.

One couple passing by in a boat even stopped to ask us “What in the hell are you guys doing? You know these are gator infested waters?” No joke, these were his exact words.

Putting this reality aside, it was easy to forget the fact that we had no idea of where we were going.  We just enjoyed the mere seclusion that surrounded us and it was awesome.

Mother nature clearly smiled upon our decision of getting lost in the wild for there was not a drop of rain in the air nor was there even a single cloud that passed over.

Continuing to float on, we spotted our first alligator basking on a log to the right of the river looking lazily at a few turtles.  I wasn’t even afraid of these majestic animals.  I’ve always repeated one keynote to myself: as long as you respect animals in their natural habitat, then you’ll be fine.  Of course, this doesn’t work for all animals such as crocodiles, but it does for the majority of them.  The key word in all of this is to respect them.

Floating past this small, 3-foot long alligator, we continued swimming with our raft and after a few bends in the river, we soon spotted a baby alligator.  Now, when it comes to baby alligators, most people will look at and adore them.

Not me.  Sure, I look at them and adore them too, but with extreme caution because if there is a baby alligator nearby you can be sure to look around and find its mom nearby and if I can tell you anything I’ve learned while working with these animals I would tell you that mother alligators do not take it kindly when you are messing with their children, even if it is just floating by.

Keeping this in mind, Chaz and I kept a wary eye out and spotted another alligator that was about 6 to 7 foot long enter the water from the right-hand side of the river and began swimming towards the baby…the mother.  Staying close to the raft and keeping a low profile, Chaz and I watched as the alligator swam gracefully passed us and towards her young.

I was left in awe at how she passed right by us, not even 20 feet away so elegantly with not even a second glance moving towards her young.  I’m sure she was keeping an eye one us as all good mother do but I expected her to atlas hiss, splash, or do something to intimidate us but all she did was swim on by.

Inspired by this close encounter, I realized something…

People need to look at these animals with a new perspective.  They are not the manslaughterer’s that people have made them out to be; only creatures, surviving in the wild on what they know best.  The only time they cause danger is when communities, theme parks, or other establishments decide to build in their home. 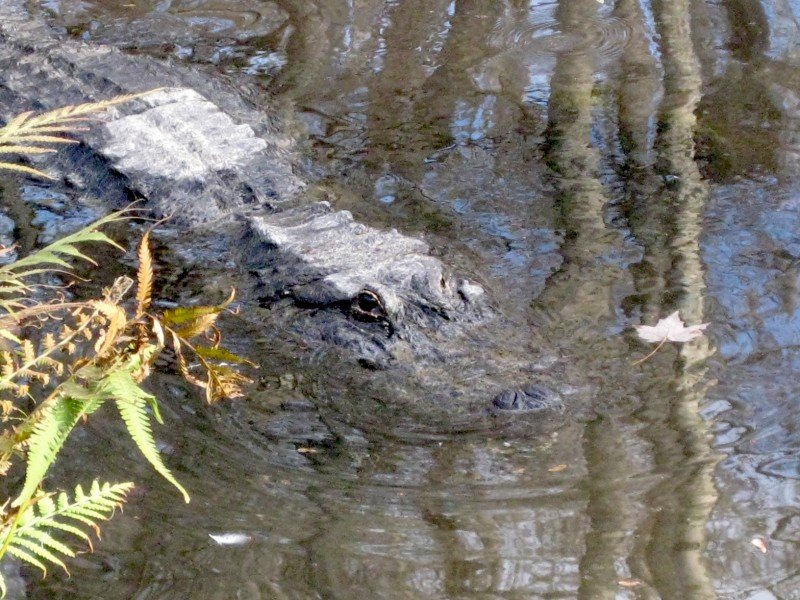 Noticing that the sun was beginning to drop, we kept looking for the campsite alongside the river that the two fishermen had told us about two hours previously.  I was water logged after our 6-hour swim down the river and more than ready to get out, dry off and most of all eat!

Bend after bloody bend in the river, there wasn’t an inhabitable camping spot around and we had almost given up, exploring some small clearing off to our left but deciding to float for just 15 more minutes, we came upon a beautiful campsite clearing on the right side of the river sitting off of an eddy.

It was perfect and totally secluded with not a single soul setting camp there.  This long awaited prize was ours for the taking!  Anxiously swimming towards the campsite, we secured the raft on a selection of roots snaking through the ground and into the water, snatched our camping gear and hiked up to our safe haven.

I set up my small ultralight tent just off the river’s edge and had intentions of making a campfire but as soon as I set up my tent, my body had something else in mind.  Quickly cooking dinner with my camping stove, I filled my belly with four bags of mac & cheese and passed out.  Come with me as I proceed to go hiking in the Ocala National Forest on day 2 of this miraculous journey!

Have you ever been camping in the Ocala National Forest of Florida??