NOTE: Have you read Hiking the Ocala National Forest in Florida: Part 1? 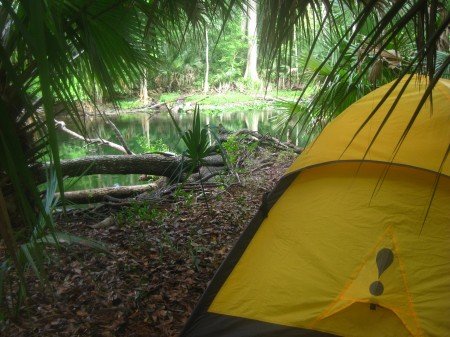 I woke after a full day of backpacking to the familiar sounds of birds chirping in the trees and squirrels playing hopscotch over my tent as I watched the leaves fall when they leaped from limb to limb.

Fish were jumping weightlessly in the river and bees were buzzing against the side of my bright yellow ultralight Eureka tent.  What it would be like to live as an animal, without a care in the world but to live for the moment and worry about your next meal.

Quite sore from the previous day’s adventure backpacking to my current location, I got dressed and crawled out of my tent to overlook the river sparkling in the sunlit day.  I could only imagine at this point what it would have been like to wake up looking over the Rocky Mountains out in Colorado or some other remote locations…perhaps in Asia?

Getting my thoughts out of the clouds, I glanced back to see my buddy Chaz sleeping in his hammock but he was stirring a bit so I assumed he would be up here shortly.  Reaching into the sky as I stretched my back out, I looked upward and took notice that it must have been around 9 or so in the morning, then proceeded to get ready for another day hiking.

About this time Chaz must have heard me stirring as he was stepping out of his cocoon and I could tell that he was just as hungry as I was.  Picking out the package of beef flavored Top Ramen from my backpack, I heated up my stove while Chaz dug out his rice.  We decided to split our portions; putting about a cup of rice with one bag of ramen.

Surprisingly it wasn’t quite as bad as I had initially thought (after all, we had spent an entire day swimming down a river and hiking), so while we were waiting for the rice to cook, I noticed a trail towards the back end of the campsite and proceeded to walk down it.  In hopes of finding something else to eat, there wasn’t much around just lots of pine trees, leaves, and inedible plants. 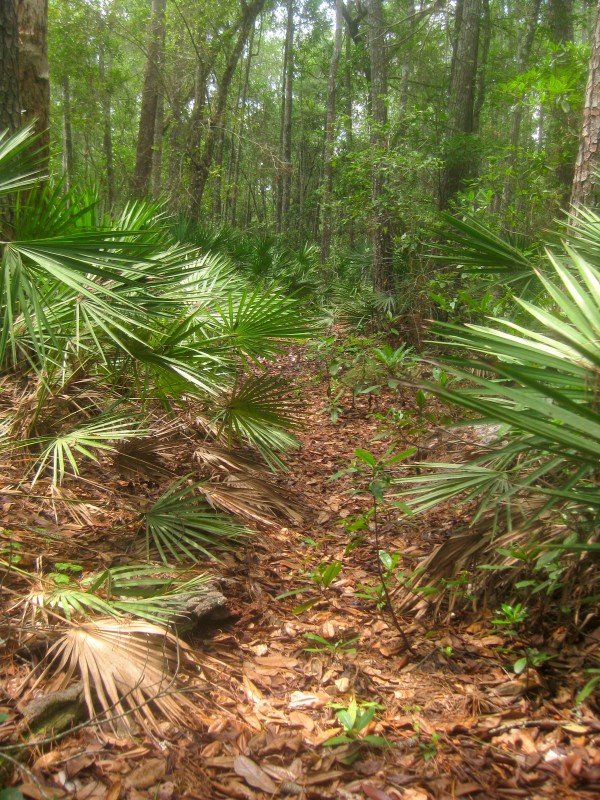 Following down the trail for approximately 15 minutes or so, it began to fishhook around and I stumbled upon another campsite that was vacant.  It was quite nice, overlooking the river with a 20-30 foot drop or so.  It would have been perfect to jump off of as the water was crystal clear and very deep.  The white sand at the bottom of the river was quite a site when the algae slithered its way in the current.

Continuing to walk on, I came across a man-made bridge (3 logs tied together) that allowed me to cross a small, dried up creek and proceed to yet another campsite that must have been previously occupied as the fire was still smoking and even had a flame to it.  Walking through this site, I saw another trail on the far end and assumed that it continued on and was a potential trailhead for as to start our hike for the day.  Noting this, I turned around and made my way back to where my breakfast was soon to be ready.

When I got back to camp, the rice was nearly edible, so I crunched up the top ramen I had set aside and placed it into my small cooking pot with the rice, covered it, and began to pack my things.  When I finished packing, we began to eat breakfast and I discussed with Chaz about our travel plans.  We both agreed that we were very sore from the day before and still somewhat waterlogged so decided to hit the trail instead of swimming all day again.

The combination of the water getting murkier downriver as it ran into the mainstream with other factors would have been too dangerous as we would not be able to see what’s going on around us.  At least the river that we were currently on had a visibility factor of around 30+ feet so that we could have prepared for and/or avoid any accidents.  After eating, we put the last of our things away and started down the trail.

Returning to the second site I had stumbled upon earlier, we followed the trail down the side of the river until it veered off into a different direction.  We continued on, noticing a change in scenery as we went from being surround by water oak, ferns, and swamp to dry sand, pine trees, and a different family of oak trees altogether.  We dodged many spider webs along the trail, particularly banana spiders.  There happened to be one that was feasting on its morning catch, a beetle that we almost rudely interrupted by running into its web but luckily just as I looked up it was right in front of my face close enough for a nice smooch. 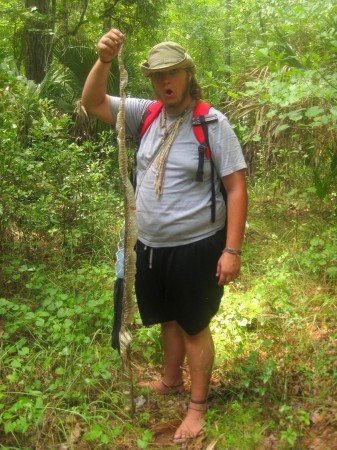 Further down the trail, it split into a Y so we decided to take a left in hopes that it returned back to the river.  Walking down this way we spotted a sure sign of active Florida wildlife…and up Chaz snatched a gnarly 6-foot long rattlesnake skin!  It must have been a few days old as it was no longer crisp and beginning to decompose.

Holding it out while I held the camera, we found it reached every bit from his head to his toes.  We kept an extra wary eye out for this beauty because she was obviously in the area and this was her territory.  Either way, I would have loved to have seen her in real life, it would have been quite a site up close and I would have had some amazing footage!

Moving on, we continued moving down the trail until we heard the faint sound of traffic.  Stopping and listening closely, we switchbacked off to the right and starting walking down another trail that ran into an old service road.

From here we followed the trail to a road that was out in the middle of nowhere.  Looking both ways, Chaz and I stopped and took a small break to discuss which way we were going to go.  Looking at the placement of the sun and figuring out our bearings, we decided to head east on the road to see where we would end up.

We eventually walked into an old recreational site sign from the National Forest that read Fore Lake, so we went there to refuel and take a dip in the lake.  It was very nice and not too crowded.  Leaving our gear on one of the oak trees shaded picnic tables, we made our way down to the lake for a cool swim. 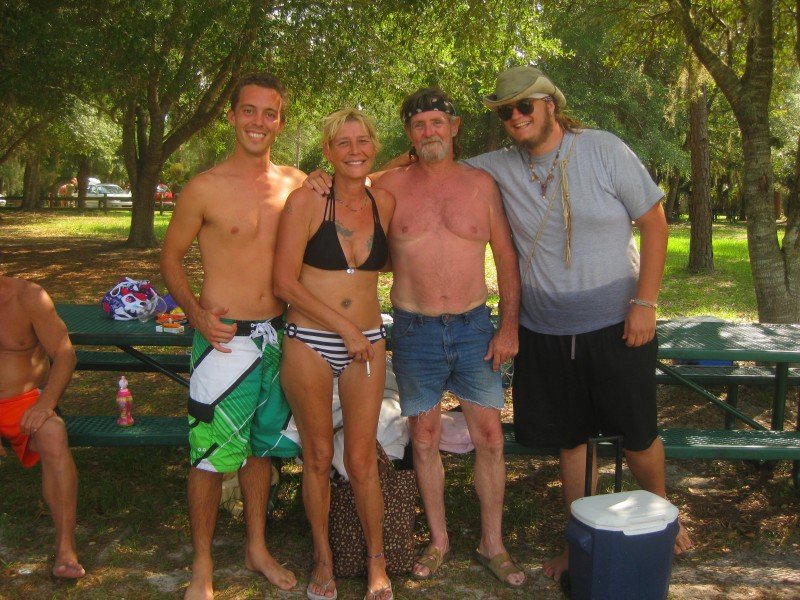 We ended up chatting with a nice older couple who were relaxing in the water on a couple of rubber rafts.  Telling them about where we were going and the adventure we had just endured, they seemed in awe so offered us a couple of sandwiches out of their cooler to go along with the story.  Of course, we said yes after eating sticks and twigs the whole trip!

Sitting down and eating our revitalizing sandwiches with a side of blue Koolaid, Chaz and I recapped the whole trip for them, emphasizing on our float down the river and the 6-foot rattlesnake skin we found!  After about 30 minutes or so, I ended up calling for a ride because we had just realized it was the 4th of July and wanted to make it back home in time to see our families!

It was definitely quite a trip and I will always remember the hospitality we received from the kind people we ran into at the end of our hiking adventure!

What’s the most exciting camping trip you’ve ever had while hiking in Florida?