Hunting for Hot Springs and Temples in Chiang Mai 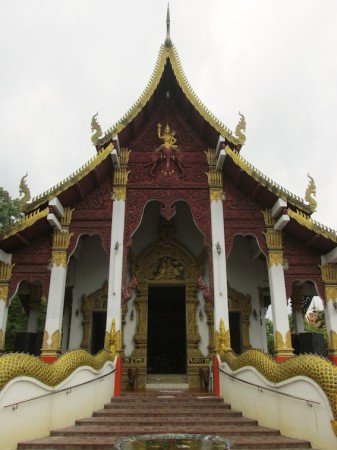 Driving scooters around Chiang Mai is seriously insane.  The zipping of cars from one lane to the next, the exhaust spraying in your face, the wet roads, potholes and of course the occasional worry about if one of the five kids on the scooter next to you is going to fall off or not causing you to get in an accident.

As one of the guys I met who moved there from America said,

“It’s safe to bet that all the drivers in Chiang Mai are drunk.  Even if they’re not drunk, treat them as if they are and keep your eyes open for any last minute changes”.

This was probably some of the best advice I got for driving around Thailand.

After having two near death collisions, you’d be surprised to know that I came out virtually unharmed.  With only a few scrapes down my left leg and a big ass bruise on my left hip, even the slide into my buddies scooter as my back tire slid out from under me in the rain on the way to the hot springs didn’t stop me from attempting to ride.  Thank goodness for helmets.

But either way safe and in one piece, we cruised on and made our way into the backcountry where the roads were a bit less hectic and more relaxed.  That’s when the journey began as we hunted for the infamous hot springs and various remains of ancient temples outside of Chiang Mai. 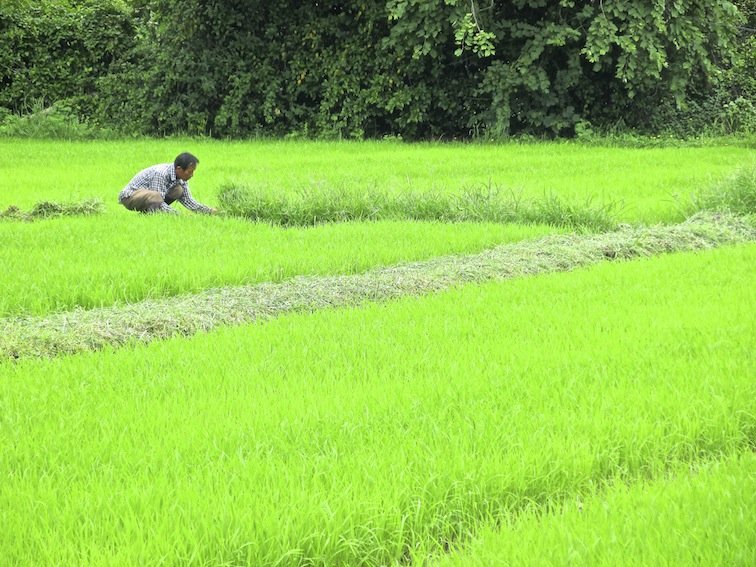 It doesn’t matter what level of accommodation you’ve booked; whether it be a fancy luxury resort, a budget backpackers hostel you found through HostelWorld or even a sofa you found via CouchSurfing, if you want to see the most scenic & beautiful part of Chiang Mai, you must visit the countryside.

Renting a scooter is the best way to do this.  You can take your time, stop to take pictures when you’d like to, eat at interesting food stands along the way and have the freedom to take a detour whenever you see fit.

As I drove out of the city, I noticed the method of driving become much more relaxed and easygoing.  People stayed in their lanes, parents were driving the scooter, not the children and I didn’t seem to have to worry about “drunk drivers” anymore.  It was nice to finally think about the upcoming destinations instead of another accident. 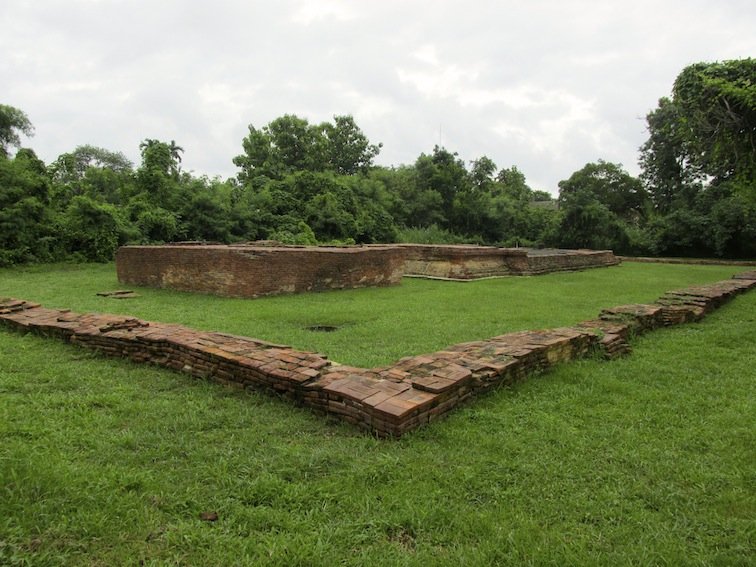 In total, we found about 6 temples before reaching the hot springs.  The first being the remains of Wat Ku Ailan.  To get there, we drove down a series of small roads in the residential streets just East of Chiang Mai about 20 kilometers or so.  It was easy driving of mostly smooth roads but I did have to swerve from the occasionally flooded curb. 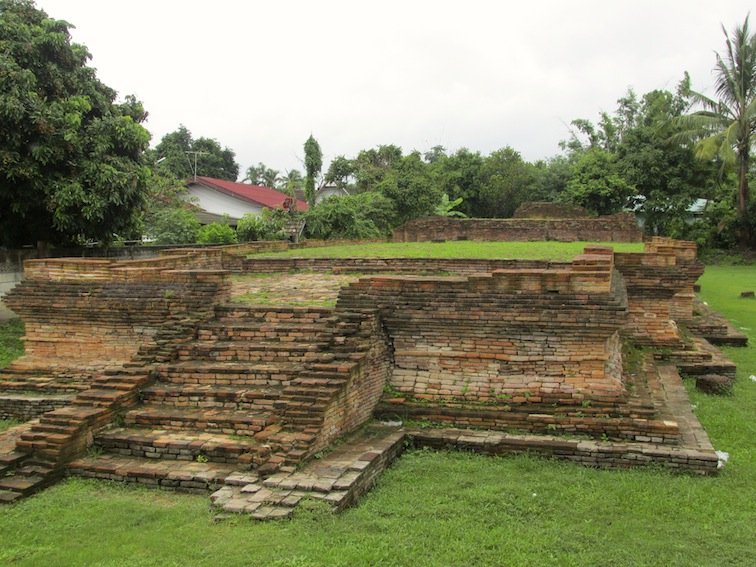 Directly across the street from Wat Ku Ailan was Wat KumKam.  It was an interesting scene when I pulled my scooter down the little dirt road that led me here.  Although it was slightly more impressive and kept together more than the previous temple, a pack of about 10 dogs came out to greet us.

Initially my instincts told me to turn around and get out of there from fear of getting bitten but as soon as I saw that they were all just large puppies, I decided to stay and cure their curiosity of who was intruding on their “wolf packs” territory. 🙂 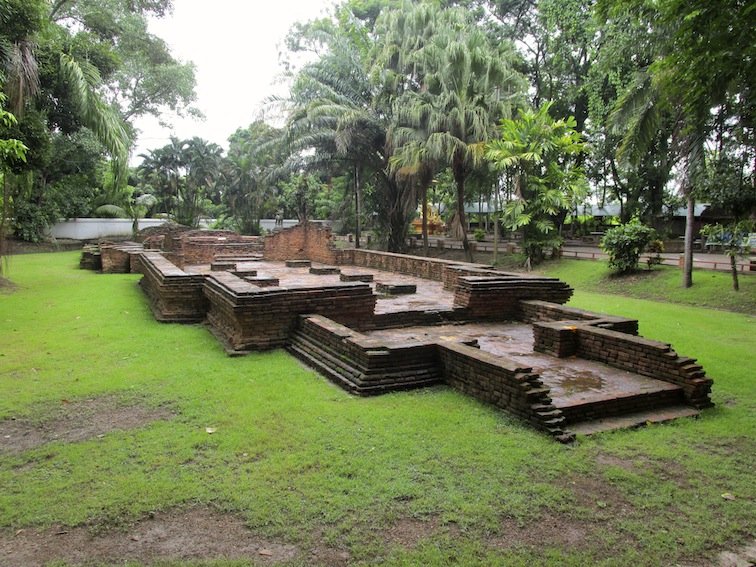 After playing with the puppies and exploring the Wat, we made our way to the next temple which was actually a collection of several temples.  The first I saw was the remains of Wat Changkam but just a few meters away was a slightly more lively temple although I do not remember the name of it.

Two monks were walking around the area of which I assumed they also lived there.  It was very quiet, no one was around and honestly in my opinion quite nice compared to the rambunctious atmosphere of the cities. 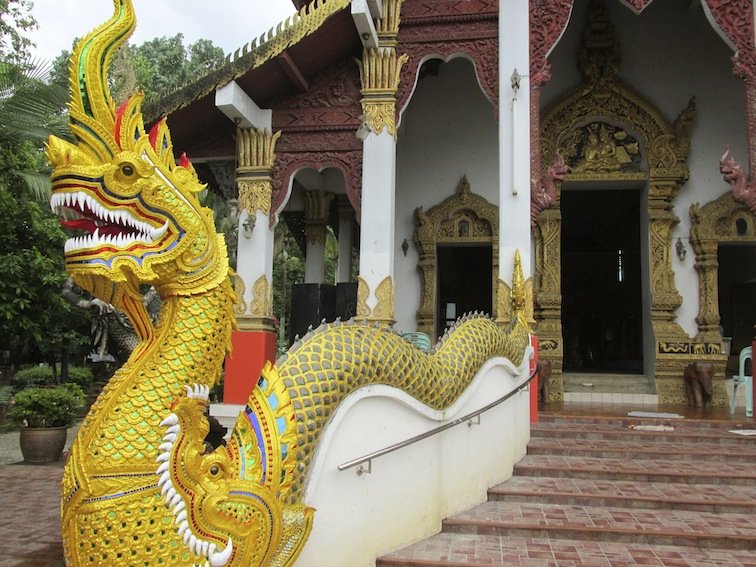 Out of all the temples I’ve visited thus far on my journey through Asia, I’m always most intrigued by the architecture and thought put into constructing such a wonderful place.  The variety of dragons molded into the temple create an honorable and powerful symbol for the Buddhist religion which seems so humble.  It’s an odd mixture but does very well, sort of like Yin & Yang, they balance each other out. 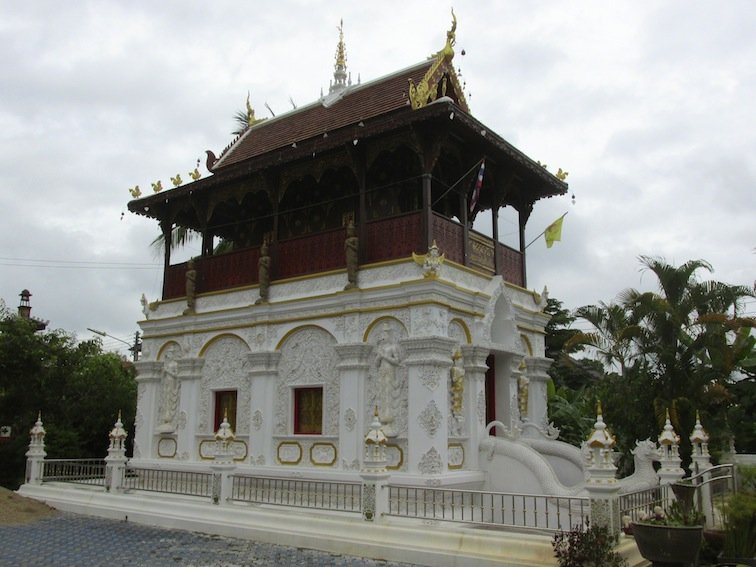 Beautiful white temple cared for by the monks.

After spending some time walking around the temples and giving thanks to the monks, the guys and I jumped back on our scooters and continued to explore the backcountry all the while making our way to the hot springs we’ve been dying to see.

We heard that you could swim in some of the pools which seemed like the perfect idea on this cool, wet day.  That was besides the fact that I hadn’t swam in a body of water in ages (something quite dramatic for me as I’ve been one who’s always grown up around the ocean).  After driving, getting directions from a local, filling up with petrol and getting more directions from another local, we finally arrived at the entrance to the springs. 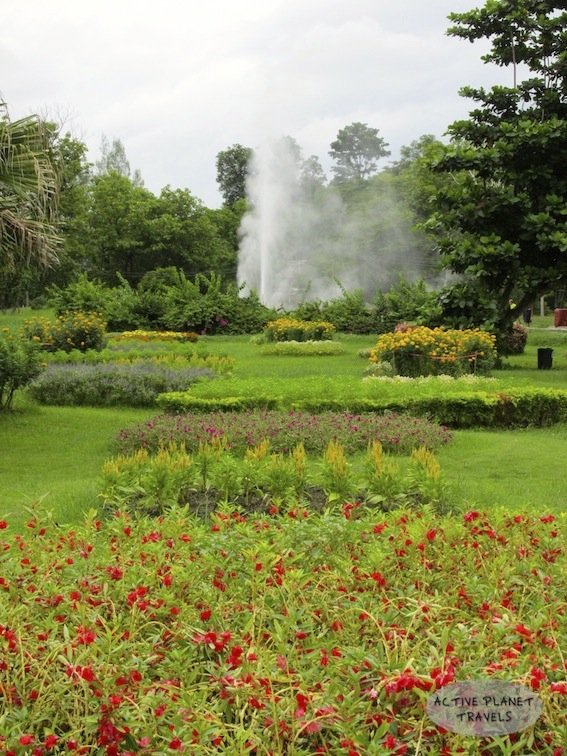 We paid the small fee (20 baht) and made our way inside.  In my opinion, the place could have been kept up a little better but then again, it was a little ways off the typical tourist path.  The flowers leading up to the springs was pleasing to the eye and reminded me of the flower garden I visited in Vegas; offering a variation of colors besides just the typical shades of green.

And although the geysers were man-made, it was pretty interesting to see the boiling hot water from the springs shoot up into the air.  The series of pipes sprawled across the ground were by all means tacky but hey, whatever gets the job done right..?

There was also a constant smell of boiled eggs in the air from all the sulfur in the water.  And, seeing how the smell was appropriate, there was actually a stand there selling eggs along with a variety of other edibles to be boiled in the water but I wouldn’t recommend consuming anything sitting in the water as you would be taking sulfur directly into your body (which is not healthy)!

Once we took in the springs and watched a batch of eggs boil, me made our way to the pool where we took a nice dip.  It was considerably cooler than the boiling water we saw before and, although we were supposed to pay a second time to swim, we didn’t.

I simply led the guys right past the ticket booth and on into the swimming area acting as if “we were supposed to be there”.  All in all in worked out great.  We saved an extra 50 baht, got to relax in the warm pool and, before leaving, I found a couple of spare tickets someone left on the ground.  Picking them up, we left the pool, flashed our tickets to the ticket stand and made our way out of the parks and back to the scooters. 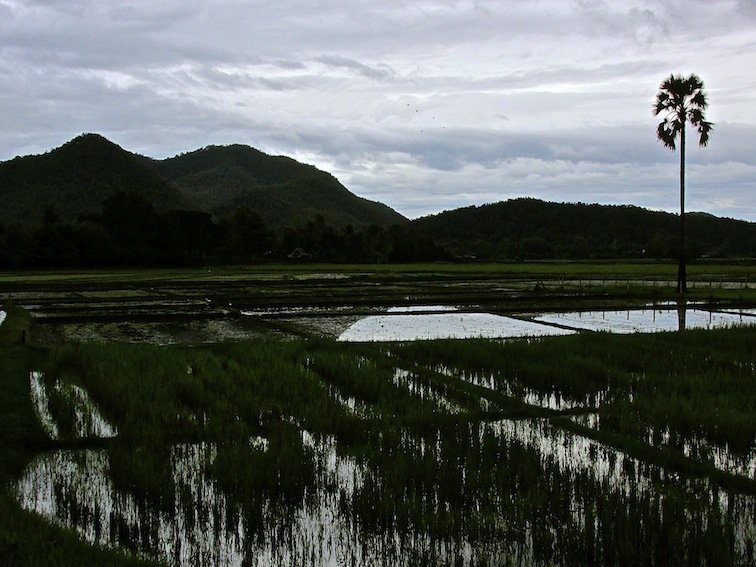 The rice fields resting into the night.

After a long day of exploring the backcountry, it was nice getting back to the hostel.  I was really looking forward to that warm shower and a nice plate of Pad Thai!  If you ever get the chance to explore the outskirts of Chiang Mai, do it.  You won’t regret it as it’s very scenic and there’s plenty to unfold.

What country do you think has the best scenery?