I’d consider the life of a Buddhist Monk one of the most humbling available.  The mornings & evenings are spent with God while the daytime is filled with good deeds.  Who wouldn’t want a more fulfilling, yet simple life than this?

During my time in Luang Prabang, one of the most memorable times I had was simply walking around the town with one of my new colleagues I had met on my slowboat cruise up the Mekong River.

While getting lost and exploring all of the cool temples, my new friend Megan and I had the unique fortune of stumbling upon a temple that was quite active.

In fact, upon walking through the gate we found nearly 20-30 young monks “in training” who were cleaning up this old building.

Needless to say, it looked as if they were having a good time as they splashed buckets of water around soaking not only the building but themselves in child-like play!

The life a Laos Monk…

I hardly even noticed the size of the entire site upon walking through the gates.  The road, paved but simple, turned out to be our walkway to a nice escape from the honking horns and rumbling tuk-tuks in town.

As we walked towards the temple that Megan spotted from the road, we noticed many of the monk’s traditional garments drying on a clothes line next to their homes. 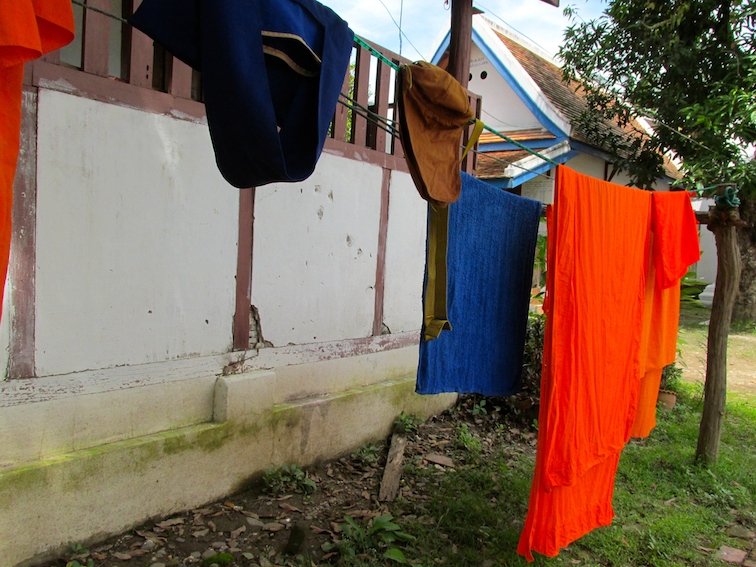 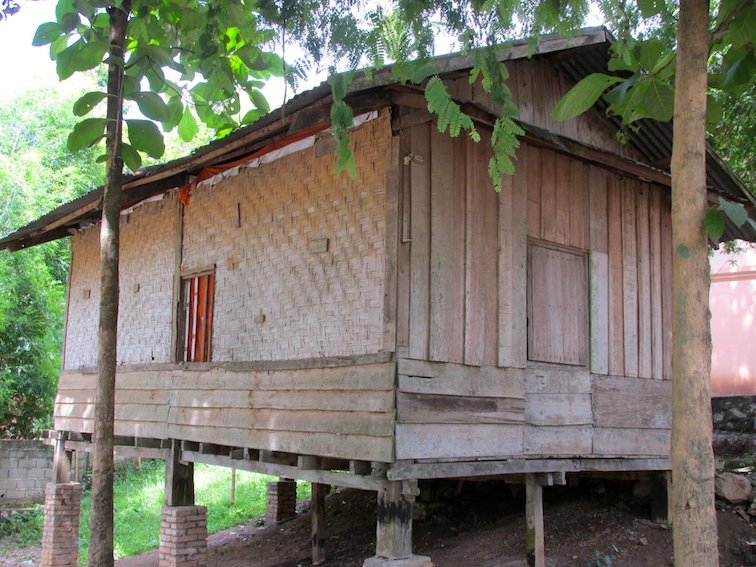 Some of the houses, about as simple as they get, stood upon red bricks and wooden blocks to keep steady.  A variety of different boards made up the construction of the house; ranging from 2×4’s, 1×6’s and wicker.  The other houses were a bit more modern and made out of cement.

Gliding past the houses, we continued to explore the vicinity. 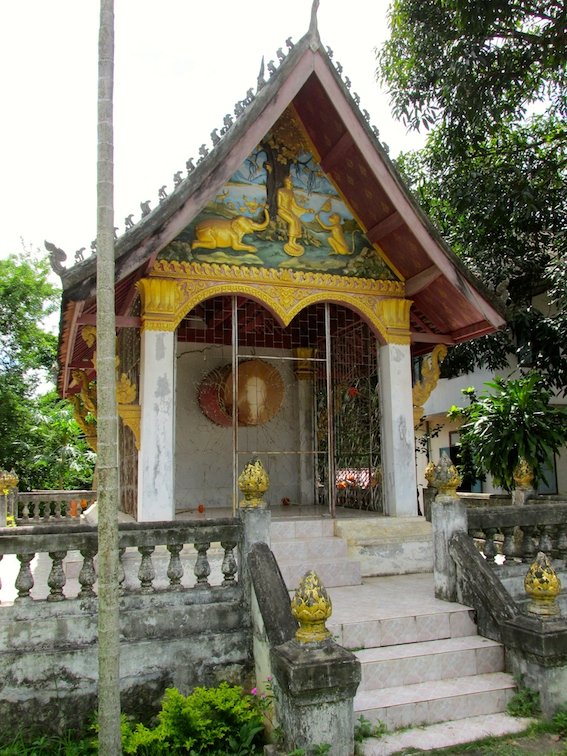 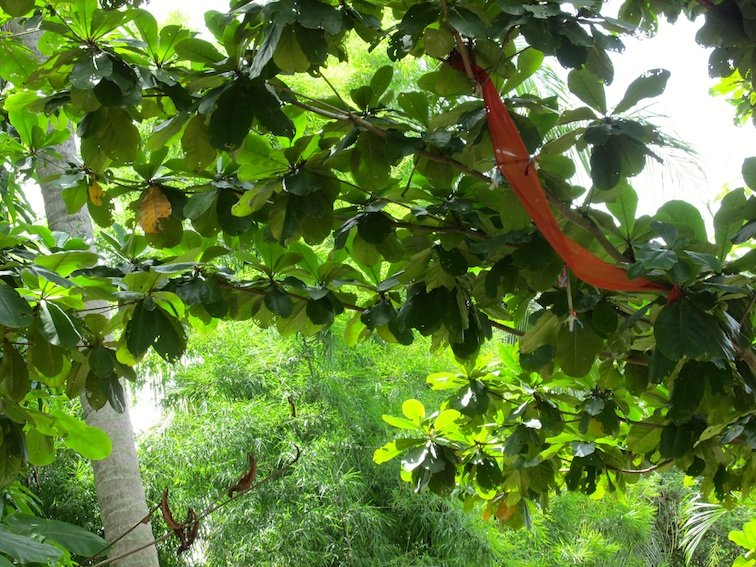 Most of the small temples were older but in good shape.  They ranged in color from gold, white & dark magenta.  The vegetation surrounds them was mostly natural and thick with the exception of a few strategically potted floral varieties.

Towards the back of the monastery in a small grassy field were 3 very tall structures.  From what I understand and by judging the charred marks on the pillars they were used for ceremonial burnings but of what I’m not sure. 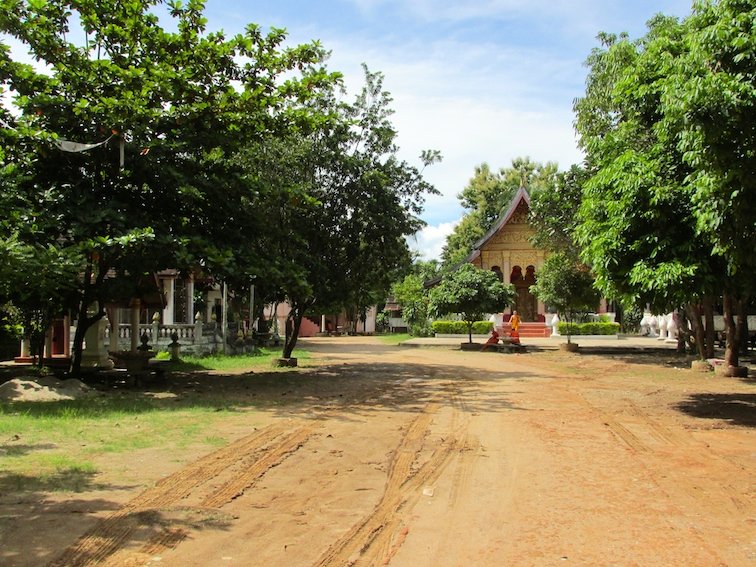 Turning around and making our way back towards the entrance, I noticed that a few young monks started to gather at a picnic table under a tree at the base of one of the temples.  Feeling quite intrigued, the two of us made our way to try and socialize with them.

To our surprise, what was originally 2-3 young monks when we walked over turned into a gathering of nearly 8-10 and more were pouring out of the surrounding buildings; curious as to what Megan & I were doing on their premises.

When we attempted to say hello, although shy, they all seemed to speak at least broken english and welcomed us with open arms; especially Megan who happened to have beautiful long blonde hair that they just couldn’t get their eyes off of. 😉 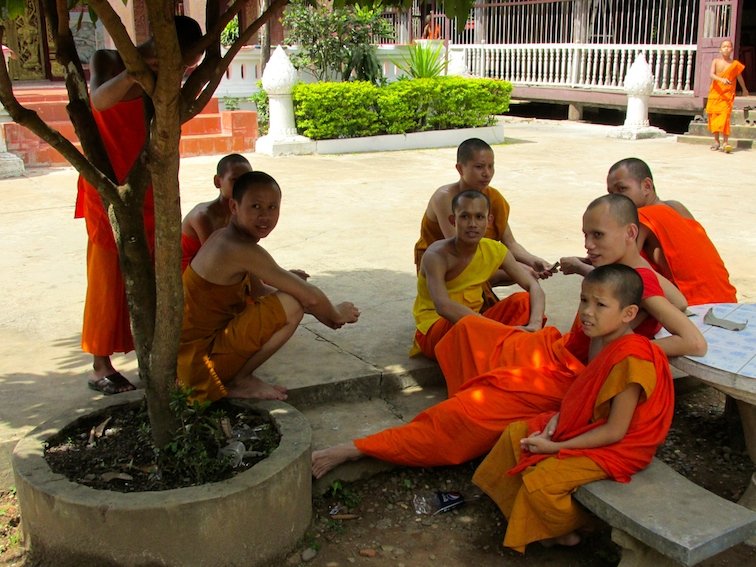 We talked of what they do here on a day to day bases.  Briefly telling us about their daily chores, housing as well as how they became “monks in training”, we learned that all of the children had chosen to become monks and attended a school here in Luang Prabang.

Where were they originating from?  Mostly the young monk children were raised in small villages just outside of town similar to that of Chantanohm Banna Village in Northern Laos. 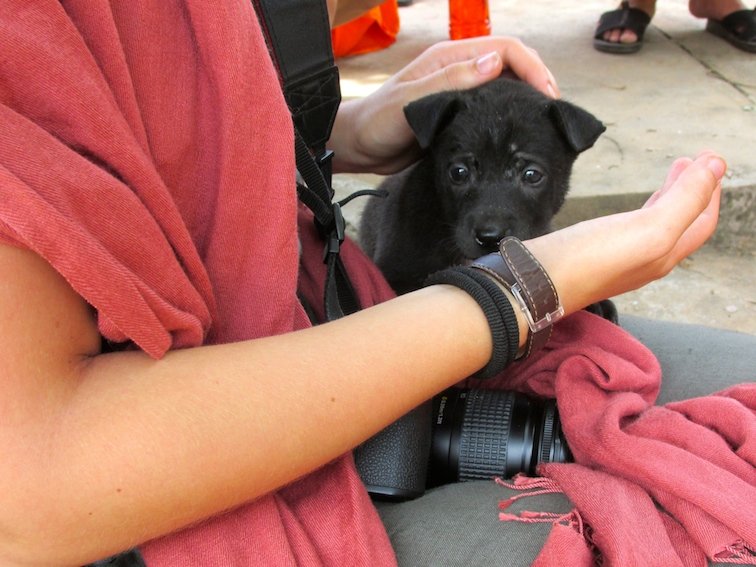 After we were done talking we handed them our guidebook to ask for directions.  It was pretty cool and quite comical as the collection of us tried to figure out where we were and where to go next on the map.  After many laughs, they finally pointed us in the general direction of Wat Chom Si on Mount Phousi.

Waving our goodbyes, it was one of the most interesting and cool experiences I’ve ever had.  Who knew that a simple afternoon walking around town and getting lost would’ve led to a private gathering of 10 monks at a monastery!

What’s the most memorable travel experience you’ve ever had?