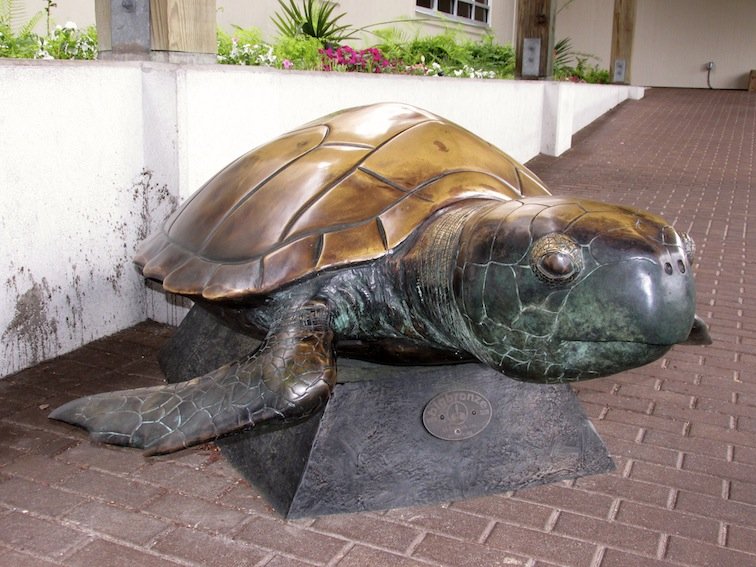 Shark diving, manta ray touching pools and live wildlife feedings…this seems to be the ‘go to’ attraction for the North Carolina Aquarium located in the Pine Knolls Shores.  And with good reason; they have a wonderful display of tropical animals for people young and old to enjoy.

But when the crew and I arrived, we wanted to get a little more in depth information of the place.  You know, get to know the people behind the shark feedings, what they do and, more importantly, what kind of impact they have on the surrounding community.

I had worked caring for wildlife and promoting conservation in the past and had always found it fascinating how different organizations practiced separate tactics to make a difference.  But before we get into the details of our visit, I must say that this specific aquarium seemed to do more than just conserve: they outreached to their community making a lasting impact on many lives.

North Carolina is a beautiful state.  Between the beauty, the friendliness and overall hospitality we were shown during our short trip through, I would highly recommend anyone to visit.  But there’s one particular place that stuck out to me upon our visit and that was, of course, the Aquarium at Pine Knoll Shores.

We arrived at the aquarium walking past the giant statues of fish, passing by the metal sea turtle and were quickly welcomed by Jim (who was head of marketing) at the door.  Agreeing to give us a personal tour of the facility, we began by learning about the upkeep of all the animals, how they’re handled and of course the history of the entire place. 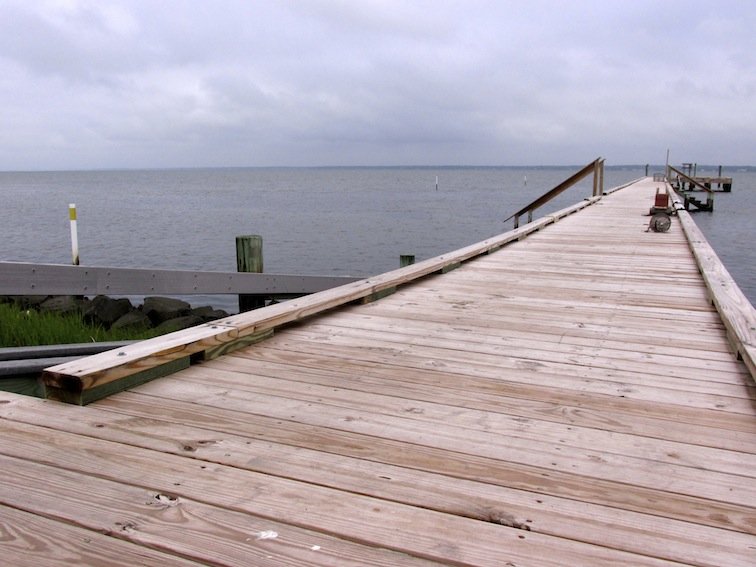 The fishing dock behind the Aquarium.

Learning about the summer programs they offered, we snuck out one of the side doors and made our way to the fishing docks.  Dodging the small sand crabs running around on the ground, we learned that they not only teach children of the importance of marine life conservation but also capture fresh ‘treats’ for some of the animals.

Having a history of working with animals and in the zoological field, I can see how this is an important and critical part of enrichment for all the animals in the aquarium. 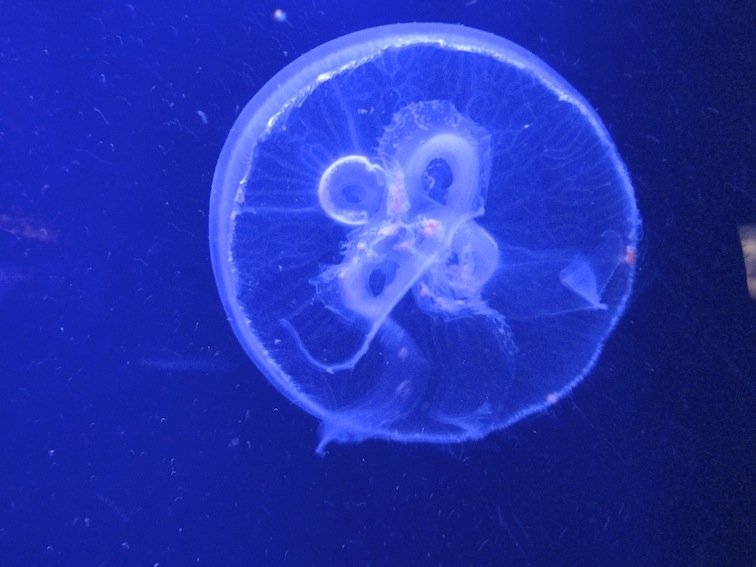 After spending some time out back, we made our way inside and enjoyed examining more of the creatures the aquarium were home to.  From lionfish, sea eels and exotic jellyfish they did a great job maintaining the environments these creatures lived in.  All seemed to live stress-free regardless of the hundreds of people walking by just awestruck by their presence. 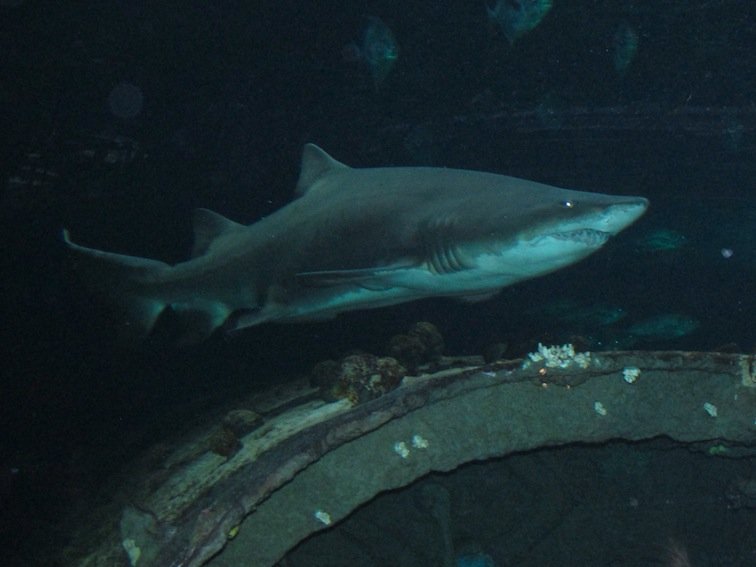 Sharks swam by in the tank.

Making our way around the corner, we were greeted by a giant tank that held thousands of gallons of water and marine life.  Lucky enough to arrive just as their daily dive show was beginning, we had the pleasure of watching trained divers jump into this shark invested pool and talk to over a hundred men, women & children about the facts of the Live Shipwreck and all the animals inside the tank…now that’s intense!

After the show was completed, Jim then proceeded to introduce us to one of the Aquarists who happily took us on a special ‘behind the scenes’ tour of how the aquarium was operated…and boy was it special. 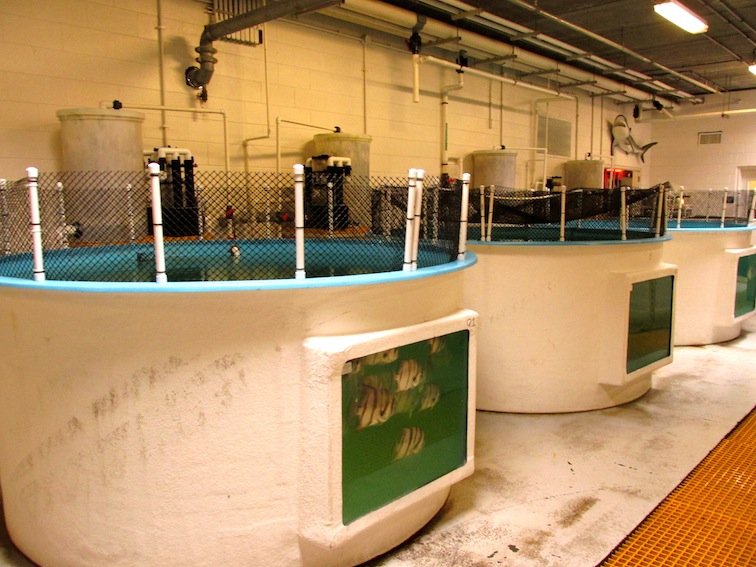 With one swipe of a key, we were in a different world of holding tanks, more exotic animals and a very clean and well-kept atmosphere.  The constant hum of water pumps accompanied by the sound of slushing water was an exact opposite from the constant giggles & laughter from the children outside.

Walking through and over to our first holding tank, we were greeted by various sea turtles, a baby alligator and other forms of marine life.  The Aquarist even went out of his way to pick them up out of the tanks so we could get a close-up view and appreciate the beauty of these creatures.  At one point, being I’ve worked with alligators in the past, I even captured and held a baby alligator myself…man I miss working with these cute little guys! 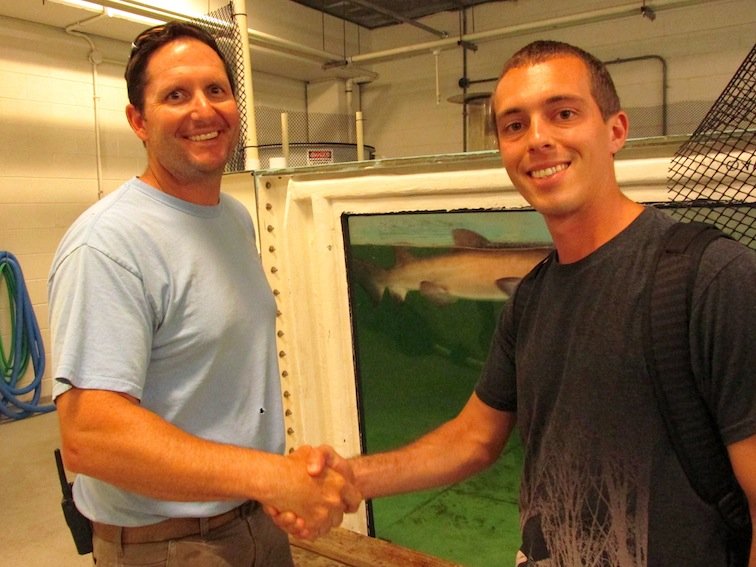 The Aquarist who showed us around.

Carefully placing the alligator back into his temporary home, we walked to the next holding tank where we found a 4-foot shark waiting to be released into the aquarium.  That’s when the question hit me:

How can these ferocious looking creatures coexist in an environment with sea turtles & other various marine life without there being a giant blood bath?

As it turns out, most sharks are actually quite passive…if they’re not hungry that is.  The aquarium and its staff do a great job keeping all these creatures on a strict feeding schedule which in turn ensures that all the animals can coexist in an environment without the worry of everything eating each other.  It works out great for everyone as, being the animals don’t go hungry the Aquarists, Zoologists, and Divers all get to interact with them teaching people of the importance of wildlife conservation.  In the end, everyone wins. 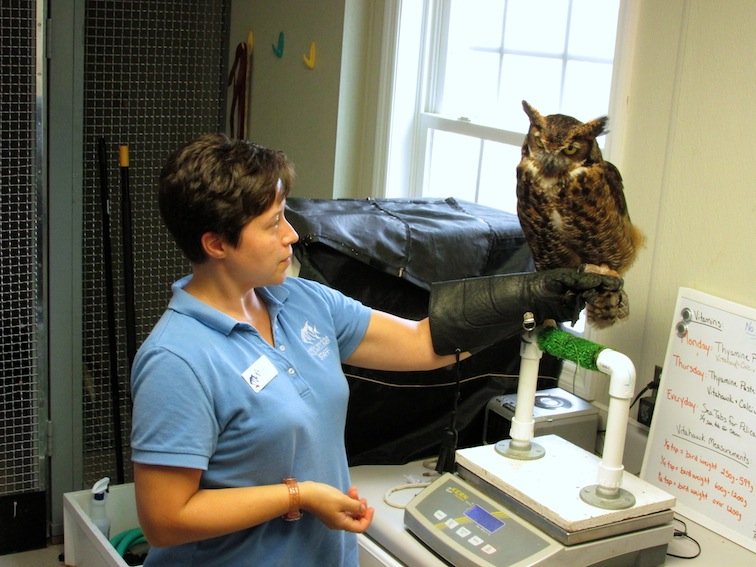 One of the many Zoologist in charge of wildlife.

Leaving the holding tanks behind, Jim guided us over for another surprise visit with one of the Zoologists who then gave us a behind the scenes tour where all of the birds were kept as well as a step by step walks through of their daily checklist to ensure the health of these creatures.

After spending some time here, we went back inside to watch the otter enrichment show where another Zoologist strategically placed pieces of fish, crab meat and other goodies in hiding places for them to seek out.  It was fun to watch as they hopped around the enclosure diving in and out of the water to find the snacks. 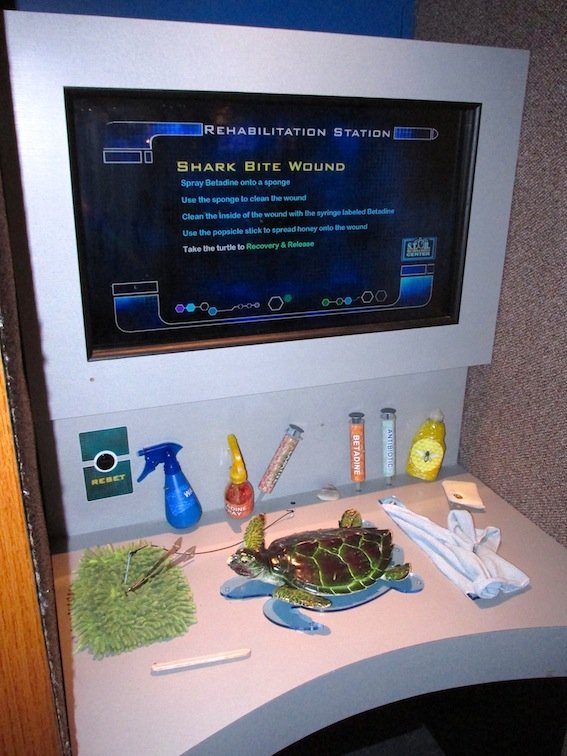 Once we finished up here, we ended the trip by going to the play lab station where I put on a lab coat, grabbed a toy which played the part as an ‘injured turtle’ and walked through the learning stations which taught people young and old of the basics on how to treat injured sea turtles.  It was interesting how the Aquarium had set up a fun way to teach children and inspire them to care about our fragile marine life. 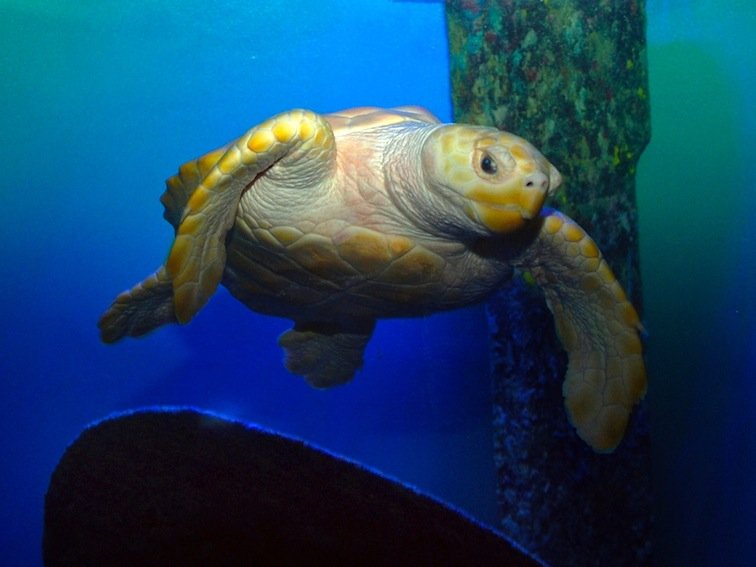 Nimbus the Sea Turtle swimming in his exhibit.

Capping it all off by visiting the infamous Nimbus (a sea turtle that’s half albino and lives in the aquarium), I concluded that the North Carolina Aquarium located here in Pine Knoll Shores is doing great things.

They’ve found a way to encourage others to get involved while inspiring them to care for our local wildlife and its conservation.  Between the educational programs, informative shows, summer camps and involvement in the surrounding community, I couldn’t imagine a better way to support a great cause all the while having the time of your life!

Have you ever been to the Pine Knolls Aquarium in North Carolina?