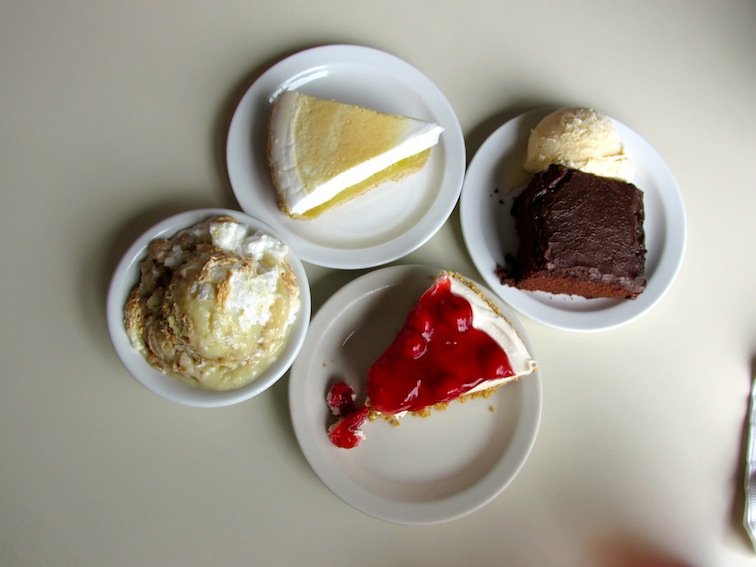 Sweetness is one of the 5 basic taste buds and can almost always be considered a pleasurable experience…would you agree?  I would have to say it’s a universal fact!

Well picture if you could multiply that pleasurable experience by 5, no 10 times fold; that would just leave you in pure ecstasy!  That’s exactly how the boys and I felt upon opening our mouths for a serving of pie at Langley’s Town & Country Restaurant in Nashville, North Carolina.

Except we didn’t have just 1 serving…no, we had four!

After we had been driving up the East Coast of the United States first stopping in St. Augustine for a ghost tour, through the streets of Savannah exploring the no open container law and have now just arrived in Nashville on our way to the Outer Banks.  But of course as all great travelers have come to realize, the best experience in travel is not getting to your destination but in the experience, you gain while getting there. Well, this was one of those priceless experiences.

As we got off the interstate and started making our way down this isolated two-lane road, we had no idea what we were getting ourselves into.  All we knew was the needle pointing to the gauge of the gas tank was slowly creeping down to the big red E and we needed to fuel up soon.

After about 5 miles of residential houses and a few run down buildings, we pulled up to a gas station that looked like it was staged back in the 1980’s.  The gas pump (along with the people) were obviously living in a more relaxed state than that of where I grew up back home near St. Augustine Beach in Florida. 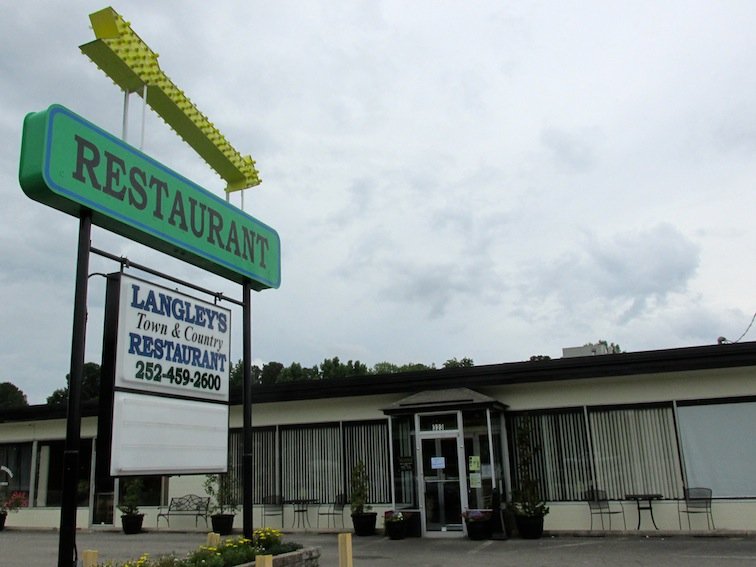 Rounding 9 o’clock and nearly starving from not eating breakfast that morning, we filled the gas tank and asked for directions on a recommended breakfast spot.  30 minutes later we found ourselves pulling up to Langley’s Town & Country Restaurant…only to find that it was closed! 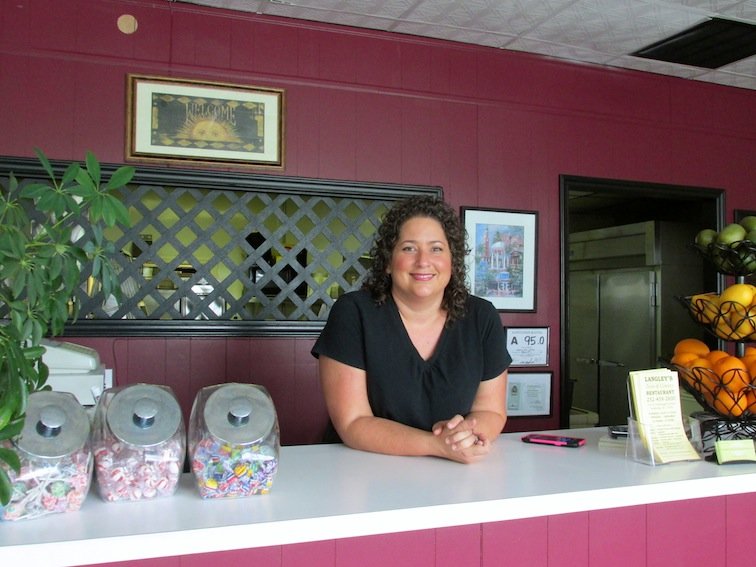 The Owner of Langley’s who invited us inside for pie!

Obviously bummed of the situation because we had been searching for a place to eat and couldn’t find anywhere for the past 2 hours, we sat out front on our phones swiping along when this smiling face of a lady opened the door and asked us if we were on a road trip.

“Well she pretty much nailed that one on the head” I thought, so explaining to her our situation, she graciously opened the front doors and let us in to try some pie!  This astounded me.  I’ve never heard of a business owner inviting someone in for pie especially when they were closed.  Talking about southern hospitality at it’s finest! 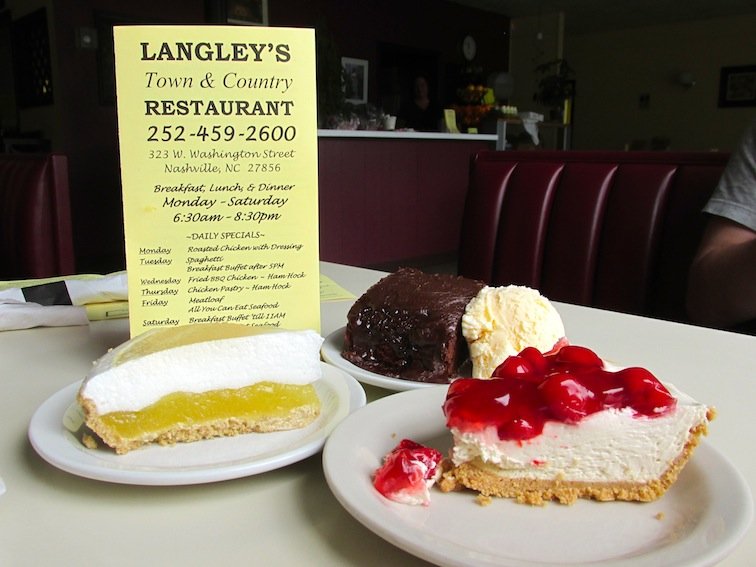 The next thing you know, we were sitting at a booth getting her recommendations and within just a few minutes, we had 3 delightful looking plates sitting right in front of us!  I couldn’t wait to dig in…they all looked so scrumptious!  Better yet, each had a very unique and distinctive feature to them.

The Cherry Cheese Pie stood out to me not only because it was made of cheesecake (I’m a HUGE fan of cheesecake) but it was by far the creamiest I’ve ever had.  The first bite as well as the last just melted in your mouth and just as you think you’ve had the best of it, the sweet smooth flavor of the cherry topped it off giving making your goosebumps rise on end.

The Lemon Meringue Pie brought me back to my childhood almost instantly!  I remember as a kid my mom would make lemon meringue pie from scratch.  Prepping the lemons, whipping the cream, baking…it took a lot of work so now, as an adult, I truly appreciate a good lemon pie.  And the pie I tried here at Langley’s Restaurant was every bit appreciated and more.  The tangy citrus flavor in the center, the baked crispy base and fluffy meringue top makes this slice to die for!

The Chocolate Fudge Cake was, in lack for better words, explicitly naughty!  The moist & velvety center melts in your mouth while the rich, creamy chocolate fudge frosting smothered around the outside makes it seem okay to indulge yourself just this one time.  Let’s just say that the person who made this cake knew what they were doing when they added the vanilla ice cream on the side to cool down your senses. 😉

The best deserts I’ve ever had!

Just as the guys and I rounded our third bite to sample all three deserts, she came back out with not only some of the sweetest tea I’ve ever had (keep in mind I was raised in the South) but yet another delicious treat: banana pudding…

The Old-Fashioned Homemade Banana Pudding was yet another desert that brought me back to me childhood.  This down home made from scratch banana pudding was rich & extremely creamy.  The flavors of the banana, cookies, pudding and meringue stood out nicely but when you put them together in one large bite, they blended ever so smoothly.  This was a close runner up to what my Grand-momma used to make! 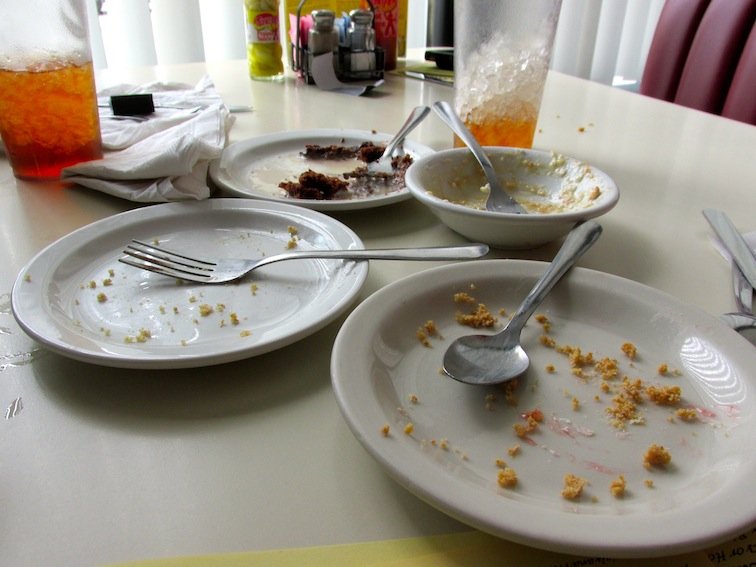 It was worth every bite!

Now it was difficult finishing off all four pies but once we had we went into an instant food coma!  The hospitality and service was like none other all the while I had never sampled pie so good.  If I must say so myself, I would give Langley’s Town & Country Restaurant a label as the best damn pie in North Carolina!

Have you ever tried sweet southern pie?