A Spiritual Experience in Sedona 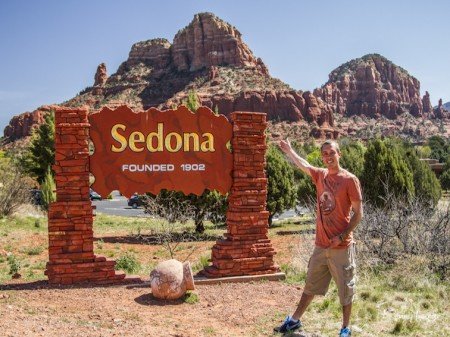 Sedona, Arizona…what is there to say about it?  From my experience, it was a place of true tranquility. The beauty of the Arizona desert.

The peacefulness of not only the surrounding mountains but as well as the town and its people.   It was one of those ‘once in a lifetime’ type of experiences…a truly unique atmosphere.

The beauty of the Arizona desert.  The peacefulness of not only the surrounding mountains but as well as the town and its people.   It was one of those ‘once in a lifetime’ type of experiences…a truly unique atmosphere.

But this wasn’t the only thing that made Sedona a wonderful place, oh no.  Where I connected with this was not only on a physical level but on a spiritual level as well.

The three Vortexes people speak of, I felt some sort of eerie connection there.  I know what you’re thinking, perhaps this guy has been “hitting the peyote pipe” a little too much but it’s not true…the only true thing about that statement was the connection itself.

As we drove off the main road and into the awe-inspiring backcountry, I immediately knew I was going to like this place.  The welcome sign alone was as scenic as I’ve seen in a long time and (being a sucker for great views) I fell in love instantly.

During our trip there Kenny, Kile & I spent the first part of the day roaming around the town looking for a local to give us tips on what to see/do.  After walking up to the main welcome center and pulling the manager to the side, she connected us with a very spiritual and intellectual man named Pete Sanders of FreeSoul.net. 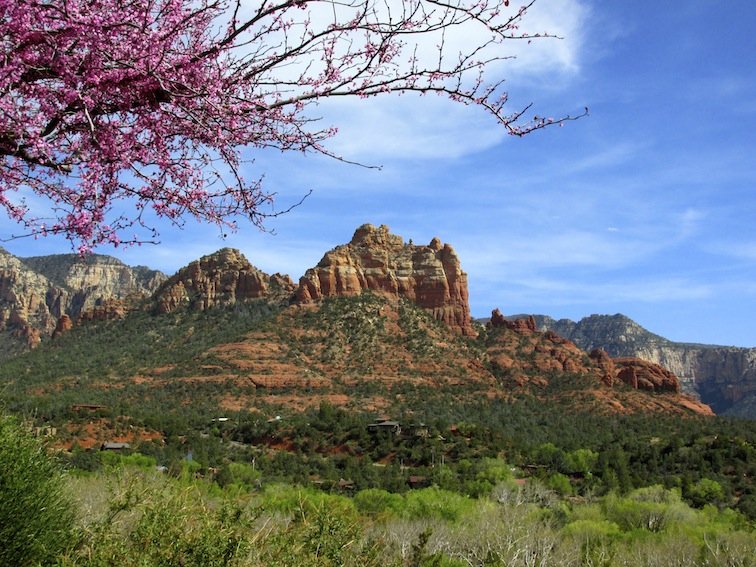 A view of the surrounding mountains from the town.

As I later came to find out, he was a long-term local of well over 20 years and knew the place, its inhabitants, and its history quite well.  Doing a little interview with him up on Airport Road at the scenic overlook, we found out a lot about the Vortexes as well as the history of Sedona, some great hiking/vantage points and what he does for a living.  I must say he was a pretty cool guy and quite knowledgeable!

Concluding the interview and making our way to some of the more scenic points he mentioned, I had only wished I had brought a mountain bike along for the ride.  There were some fantastic trails that seemed to run everywhere you could think of.

Easily enough, the stoke meter was at an all time high! 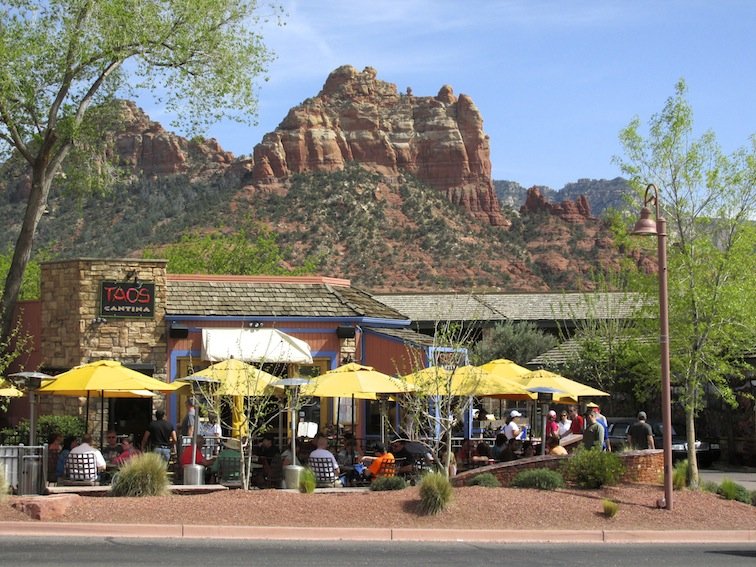 One of the many fantastic little restaurants.

After exploring the backcountry and some of the less traveled roads for some time, we finally made our way back to the town where I was able to try some of the local food.  My favorite being the Cactus Fruit Ice Cream from the Black Cow Cafe.

It was homemade there in the town and had a fresh, crisp taste with a slightly sweeter flavor.  I guess a good way to describe it would be like a strawberry/kiwi mixtures.  Simply put: it was delish! 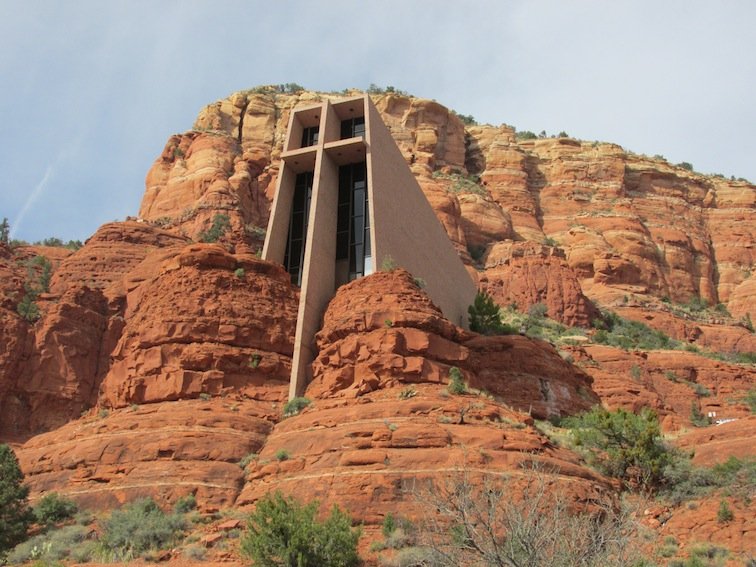 Once I finished my little treat in the warmth of the sun, we made our way up to the Holy Chapel.  This is where I learned a little more about the spiritual connection of the place and how it came about.  As I read the colorful planks outside the main door, I learned that the chapel was actually built as a memorial for the mother & father of the architect who designed the place.

It seems that he fought tooth and nail with the government until it nearly had to be passed as a law to be approved for construction back in the mid-1900’s.  Apparently he had searched high and low across the nation for a suitable location and due to Sedona’s unique spiritual connection, this is where the Chapel began to set its foundation. 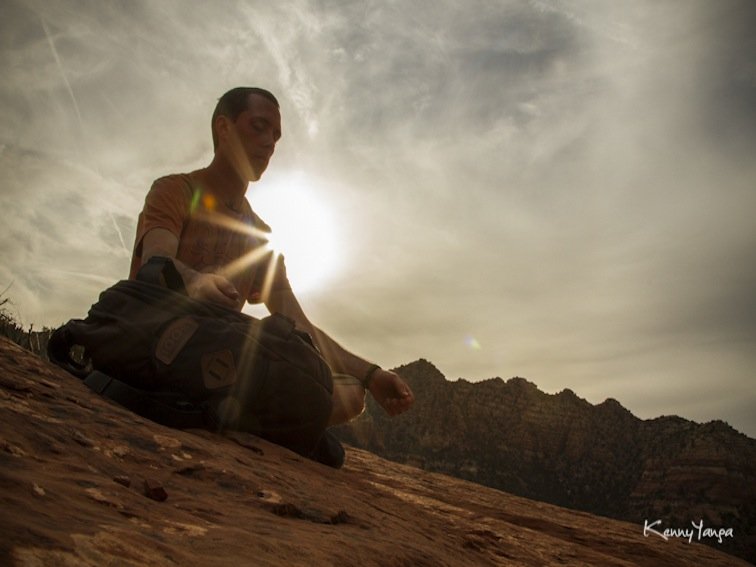 Meditating atop the Bell Rock Vortex.

Having a little trouble feeling that link to the spirituality I kept hearing about, we decided to head on up to one of the main Vortex locations: Bell Rock.  Here we grabbed the camera and began hiking in hopes of summiting the site where I felt I would have had the strongest connection to the Vortex.

The trail leading up to the base of Bell Rock was well kept.  On each side was an old school bobbed wire fence to help protect the natural environment and pristine beauty of the area.  After three quarters a mile or so in, the fence quickly dissipated and we were left with a one lane dirt path that lead to where we would begin our ascent of the mountain. 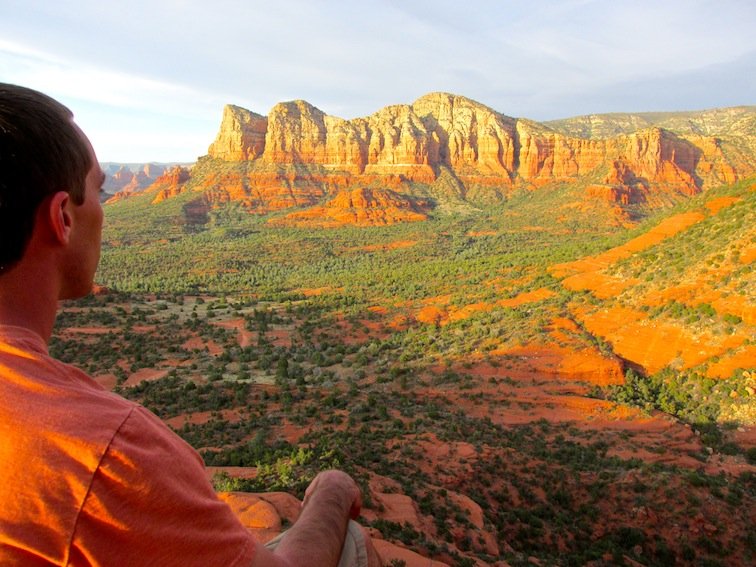 The view from Bell Rock is Astounding!

From here on out, it was of personal will to make it to the top but with strong will came determination and we got about as high up as we could without having to use proper rock climbing gear.

When I made it to the highest peak attainable, I sat down and began to meditate.  Instantly going into a trance, I felt a strong connection that was at first indescribable.  I was left in a moment of inner peace…something I’d gone a long time without until that time.  I was happy and joyful yet calm and totally aware of my surroundings.  Such a strange, yet welcoming feeling that is.

I will go into more detail in my upcoming article of the ascent itself…there were simply to many details without going off topic for this article. 😉 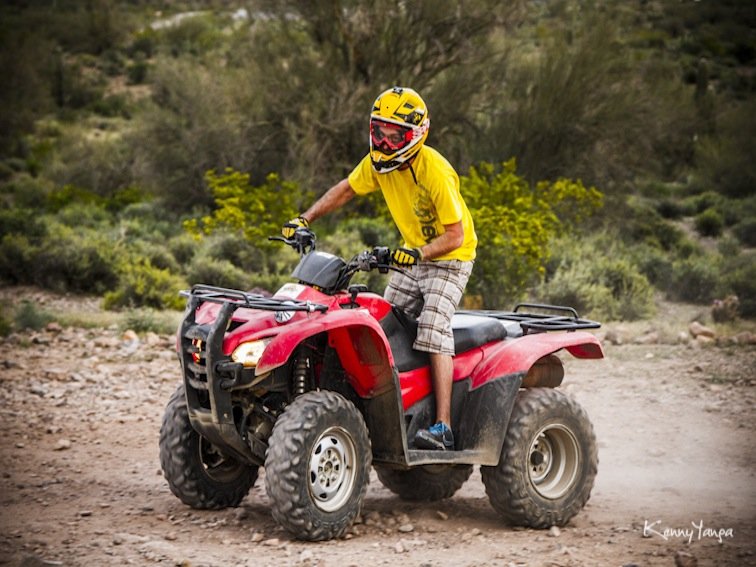 After spending a solid two…maybe three hours at the top of the rock, we began our descent as the sun had over the horizon in preparation for our next day.  I had arranged a Press Trip with Arizona Outdoor Fun Rentals and we were all extremely stoked!

Sitting down at a Chinese restaurant after the days’ outings, we all agreed that we connected to this magical place in our own separate, almost indescribable ways.  Whether it have been on a spiritual level, through the connection of the town or through the people itself and the beautiful environment, we all loved every second of the day and only wished we could have spent more time there.

Have you ever experience the fantastic environment and attractions in Sedona Arizona?