Things to do on a Road Trip in Western Australia 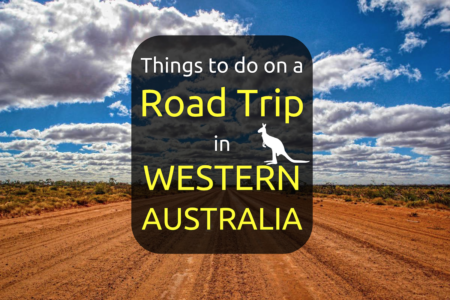 If you’re looking to travel to Western Australia and take a road trip from Perth to Exmouth, you’ll find plenty of road trip-friendly places to visit as well as things to do.

Covering the majority of the West Coast and nearly one-third of the continent, Western Australia is primarily dried up outback and quite the opposite of the major metropolitan cities of Melbourne or Sydney out on the East coast.

However, if you’re up for the challenge, there are still a few places to explore where you can truly get the down under experience.

After you fly into and choose to get a good night’s rest from one of the many hotels in Perth, slowly begin your road trip by making your way North towards the city of Exmouth, but don’t be afraid to veer a little off the beaten path; after all, that is how I witnessed the breathtaking miracle of a baby being born on a slow boat in Laos.

It’s always good to be wary that Western Australia is one of the least developed states and many places are only accessible by a dirt track, so you’ll need a dirt bike or 4WD to get to some places. Renting is an option, but some companies will go as far as charging you extra to go offroad, even restricting it entirely.

If you want to go wherever you want, look into buying a used vehicle from a private dealer or listing site like Gumtree. It sounds expensive, but cars in Australia are surprisingly cheap, and at the end of the trip you can sell it back to make back some money. Either way, if you keep an open mind, you’ll definitely explore some very unique places that are sure to surprise and inspire your entire adventure. 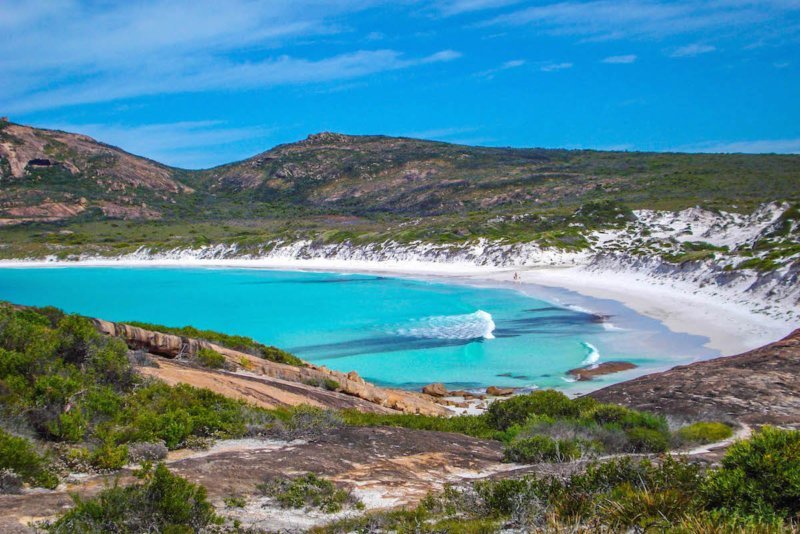 If you’re looking for the most dramatic coastal scenery in Western Australia, you have to check out Cape le Grand National Park.  The massive rocky peaks rise from the coastal plains here, sheltering small bays where the sand seems to squeak under your feet as you stroll along the beach.

What’s more is that there are several places for camping, hiking, swimming and, of course, wildlife watching.  If you’re lucky, you may even get a glimpse of one of the area’s local kangaroos!

Western Australia hosts quite a few stunning pink lakes, the most well-known being Lake Hillier.  But what exactly causes this natural phenomenon and the lake to turn pink?

Honestly, no one really knows.  A handful of scientists has speculated that the lakes’ vibrant pink hues are created by bacteria that live in the lakes’ salt crusts emitting the colorful dye.  And although the pink bubblegum color may put you off, it’s actually safe and fun to swim in.

Just keep in mind that, along with its high salt content, the lake is extremely difficult to get to for normal tourists as it’s located off the mainland requiring a boat to get to. 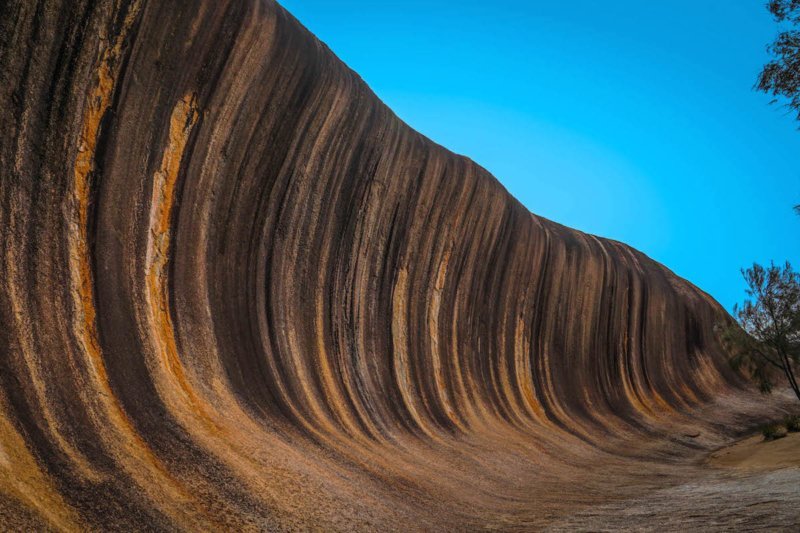 Taking the shape of a very large breaking wave (hints its name), the rock formation that makes up Wave Rock is definitely worth adding to your bucket list as you take a road trip through Western Australia.

Standing 45 feet high and over 330 feet long, Wave Rock was created by weathering and water erosion over the course of many years.  The distinct coloration is simply a byproduct of water trickling down from the top where the dissolved minerals have collected.  If you’re taking your road trip here during the Spring, keep an eye out for the many orchids living at the base of the trees.

Valley of the Giants

Although it’s located around a 4 1/2 hours drive south of Perth and in the opposite direction of Exmouth, you’d be doing yourself a favor by making room for some time in your itinerary to take an adventure exploring the Valley of the Giants treetop walk.

With red-tingle trees towering above you some 120 feet in the air, you certainly get a sense of what it’s like to live in the treetops as the native birds do.  Not much of a heights person?  Then explore the massive trunks ground level along the Ancient Empires boardwalk.  Either way, you’ve never seen trees as big as this and are sure to remember it for years to come! 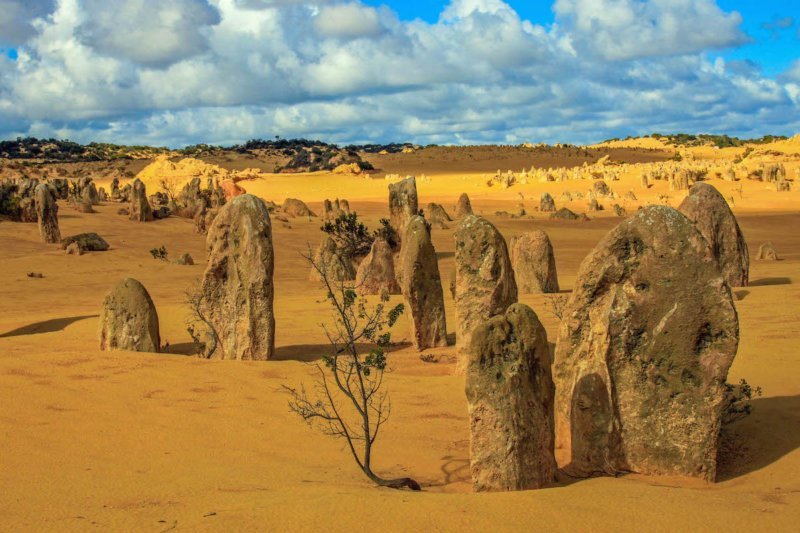 Reminding me much of the Drumheller Hoodoo’s in the Canadian Badlands, the Pinnacles in Western Australia hold their own distinct characteristics.  Located in the heart of Nambung National Park, these ancient desert sculptures are certainly worth exploring as they reach up out of the yellow sand dunes.

Sitting right along the coast of the Indian Ocean, there are plenty of things to do like surfing, windsurfing, swimming, snorkeling, and even deep-sea fishing.  If you’re really up to an adventure, go on a sandboarding adventure as I had in the Great Sand Dunes National Park.

The sand dunes here may not be as steep as those were in Denver, but you’ll surely have a blast as you go sliding down the hills!

West Cape Howe National Park, a fantastic natural attraction along the coast of South-Western Australia near Albany, offers plenty of opportunities for adventure for those who have the will to go rock climbing or hang gliding.

However, if you’re not up for the challenge of jumping off a cliff, there are still plenty of white sandy beaches for you to go fishing, swimming, or diving along with remote hiking trails for some decent trekking.

What’s even better is that it’s just about a stone’s throw away from the Valley of the Giants, ultimately making West Cape Howe National Park a no-brainer when it comes to adding it to your Western Australia road trip itinerary. 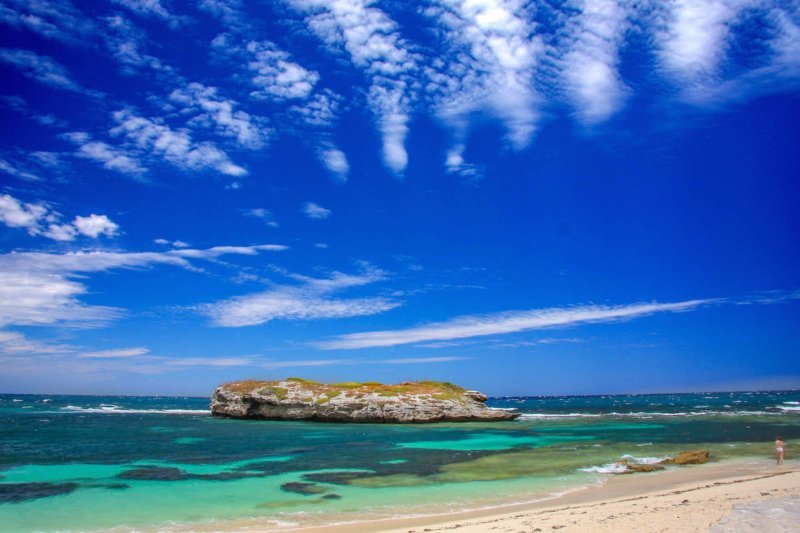 With it’s one of a kind preserved natural attractions, island tours, and fun activities, Rottnest Island is a fantastic place to add to your road trip itinerary.

There are quite a diverse collections of tours to go on – anything from a bus, train, segway, and guided flights – as well as the opportunity to spend the day at the beach, snorkel along the coral reef and even go boating.  When it comes down to it, if you can come up with an idea of something to do, Rottnest Island has got you covered!

What points of interest would you like to see most on a Western Australia road trip?