Top 5 Affordable Things to do in Brisbane 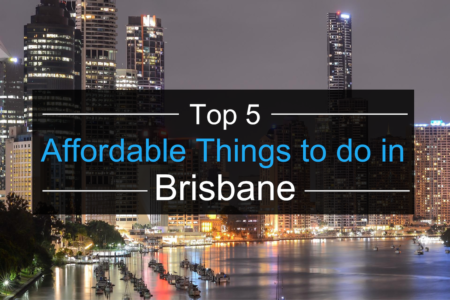 People travel from around the world to visit the exciting city of Brisbane.

Between the exotic Brisbane city life and multitude of affordable things to do in Brisbane, there’s no questions as to why anyone would want to visit.

Heck, even if you are traveling to Brisbane, it’d be a good idea to consider extending that vacation by taking a road trip along the East Coast. Naturally, you’re going to want to start in Brisbane, make your to explore some of the best places in Sydney, then on South to explore the shops of Melbourne.

However, if you are on a trip similar to this and are on that first leg, after making your reservation at the choice of many hotels around Brisbane, what is there left to do when you’re on a modest budget and traveling for an extended period of time. Take a look at this list of the most affordable things to do in Brisbane, as well as some general advice on how to spend the weekend with your friends while traveling in Australia!

Affordable things to do in Brisbane

While not quite on the same playing field as the markets around Vietnam (quite honestly, they’re much, much cleaner), Brisbane has some of the most amazing markets in Australia if you are looking to get your grub on with some pretty worldly treats. For around $20 bucks, you can have your fair share of anything from fresh salmon, middle eastern falafels, to sweets that will straight up knock the shoes off your feet…and maybe even the belt off your waste!

It certainly isn’t Central Park in New York City, but it’s considered a close second. Overlooking the Brisbane River, the city’s park is a lush, green escape filled with open fields, fig trees, and loads of flowers. If you’re looking for a popular local escape where you can enjoy the laid-back vibe of Brisbane, New Farm Park should definitely be on your bucket list of things to do.

3) Scenic tour of the countryside

If you are a photographer or Instagram junkie like myself, you won’t be disappointed by taking some time to explore the Brisbane countryside for some good photo opportunities. Places like Mount Coot-tha offer a free entrance fee to get some pretty spectacular panoramic photos of the entire city. Meanwhile, if you’re looking for a good picnic spot or would like to find a nice ocean view, check out Mt. Glorious for some – dare I say it – glorious photos.

4) Learn some of the local history

Something I look to do when traveling to a new destination is getting to know a dash of the local history. What better place to do this than by signing up for a guided tour of the city. If a guided tour is not quite in the budget, head down to the historic district and visit the Old Parliament House, Government House, and Wolston House. These spectacular monuments of Brisbane will show you a more simple era of colonial life back before the city shaped into what it is today.

5) Cycle along the New Farm Riverwalk

Similar to how I explored the city scene by biking around the city of Milwaukee (and went on a pretty epic brewery tour with Lakefront Brewery), take some time to rent a bicycle and cycle around the city of Brisbane – more particularly the New Farm Riverwalk. Although it’s true a handsome chunk of it was destroyed, it’s up and fully operational once again allowing both athletic types as well as casual strollers to explore.

Kangaroo Point and New Farm Park are certainly high-point, but don’t let these locations be the only reason to come down here. There’s plenty of opportunities for you to stop, enjoy the scenery and take plenty of pictures to brag to your friends back home!

Which of these affordable activities in Brisbane would you like to do most?