On Top of the World at Tibet’s Mt. Everest Base Camp 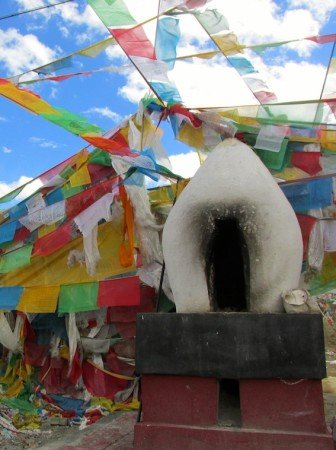 We started the day early; waking at 8:30 am to a chilled room under not quite so clean thick blankets.  The plan for our group was to meet for breakfast at 9 am, discuss the day’s plans and proceed through the 100 kilometers to Everest Base Camp (EBC).

After finishing our simple Western breakfast (one small cold omelet, a small bowl of porridge made of yak milk and two pieces of toast that tasted more along the lines of stale bread), the group and I gathered the rest of our belongings and jumped into the Land Cruisers.  Now…to begin the long ascent.

The road was well maintained and an enjoyable ride up until we reached the UNESCO World Heritage Site entrance.  From there, our 100-kilometer off-road journey began as we were thrown like a ping-pong ball inside the small cabin.

The surrounding environment offered a vast array of views ranging from the small villages where children played effortlessly despite the lack of oxygen at a high climate and the adults put a halt to their daily tasks to peer at us Westerners as we drove by.  The surrounding mountains stood spectacularly as they cast their daily shadows over the never-ending grassland.

This time of year, late September, the land was quite dry as it is considered the dry season in Tibet.  The Land Cruisers that sped down the bumpy roads cast a giant shadow of dust behind them that would have made one think tat the infamous dust storms of Egypt had crossed into the lands of the Himalayas.

Hiking to Mt. Everest Base Camp in Tibet 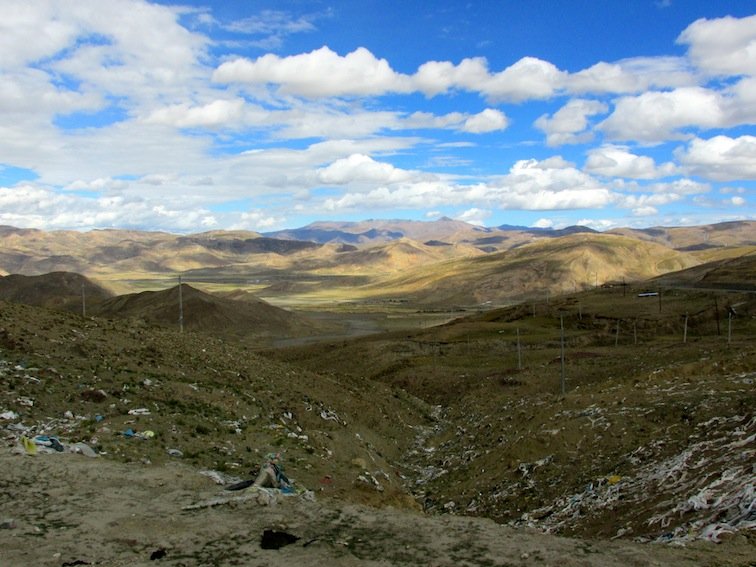 Continuing our drive up to about 12:30pm we stopped for lunch at a small village along the way.  The buildings were painted a pasty white at the base but housed a thick layer of dust that helped them resemble the land.  Along the roof-top was a rugged, 6-inch of red paint with a sort of square box design that was broader at the top and more narrow towards the base.  Below this design was an intricate collection of more painted boxes ranging in colors from orange, yellow, violet, red, green & white.  Inside these boxes stood a series of beautiful, hand painted flowers that circled the entire building. 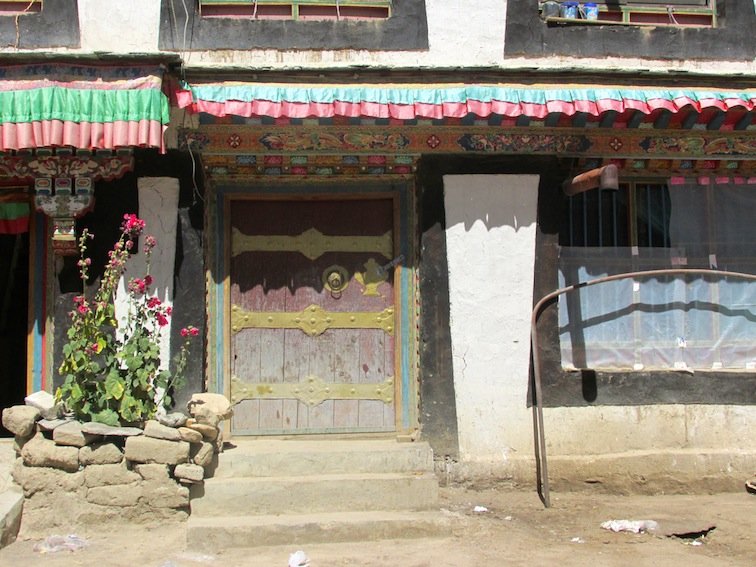 Parking the vehicles and stepping through one of the doors and into the main courtyard, we found ourselves surrounded by two floors of cute but shabby little hotel rooms, basic hole-in-the-floor bathroom and a dining area to eat at. 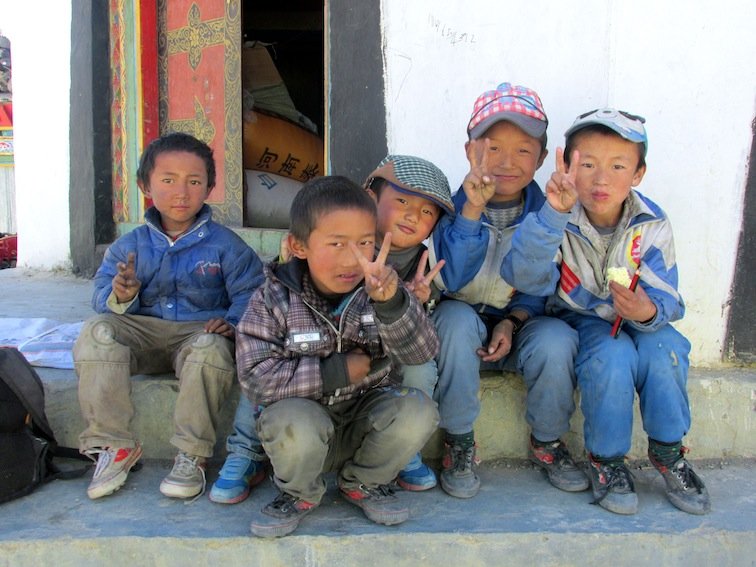 I ordered the local yak curry & rice.  It was very tasty and, after slurping it all down, we jumped into the Land Cruisers and continued our drive to EBC.

I’ve never seen terrain before like this and had no clue exactly how diverse the landscape in Tibet was while I was researching back in the Northern Villages of Laos.  If I could resemble it to anywhere I had traveled before, I would have to say that it resembles that of the continental divide over Independence Pass back in Colorado.

Only this land was different in that there were no trees and the yaks & sheep roamed the land in giants herds alongside one or two herders.  The large white rocks made it seem as if the land was a boulder infested white coral reef surrounded by seas of thick moss.  It was very beautiful. 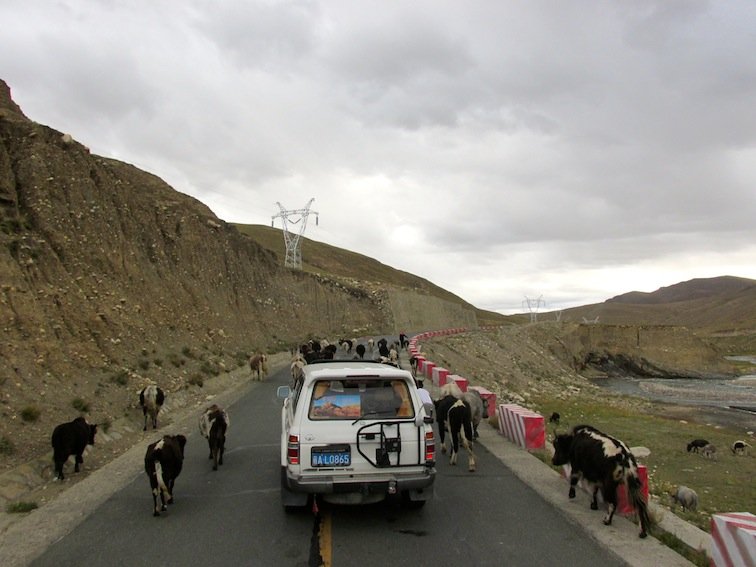 As we drove the remainder of the 5 hours, stopping here and there to take in the view and to rest, we finally passed through the checkpoint at Pongbuk Monastery (the highest monastery in the world) and drove the last 10-minute stretch to EBC.

The entire facility was located in the rocky valley shadow just below Everest.  The camp was made up of a series of tents that shaped a large hollow box.  On the outside were the black tents and in the very center, you could find all the modes of transportation that brought the hikers there.  In the fine line between the parked cars and tents were evenly spread out tables where local Tibetans sold a variety of both authentic and unauthentic items such as prayer beads, singing bowls, gems, large raw crystals, prayer flags & large knives that were made to be fastened on your hip as they had done for centuries.

Inside of our seemingly small tent was a surprisingly large room filled to the brim with hard beds and tables that could house, temporarily, about 15 people.  In the center was a small cast-iron stove boiling a pot of water; the flames of which were constantly fed a heavy dose of manure from both sheep & yak just wondering outside the main site.

The walls were covered in a bright, shiny cloth that resembled a very cheap satin material.  The design was basic, yet beautiful.  Blue & yellow patterns housed a variety of hearts, flowers, and roses while small white lines elegantly filled in the spaces.  All in all, the room seemed quite comfy.

After dropping off our packs, the group prepared for the peak of our journey as we paid 25 RMB each for the local bus up to base camp and, after an additional 10 minutes or so on the long bumpy road, we finally arrived at the last checkpoint where we looked up from the base at the world’s renown Mt. Everest. 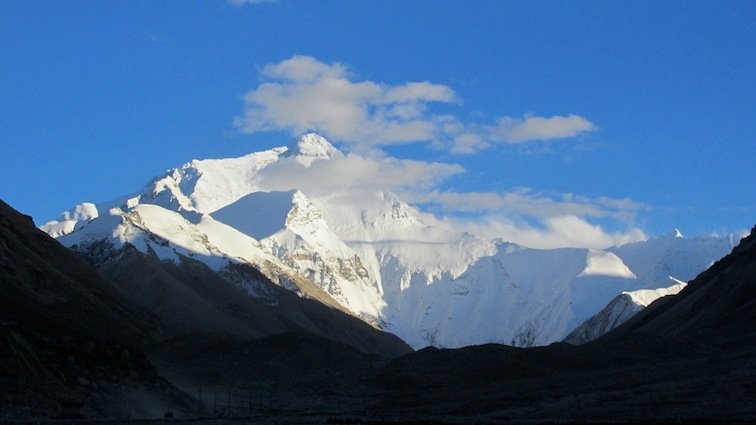 The view from the hill was like that of a rare jewel in a vast 1,000-mile cave; shining brightly against the darkness.  The sky was nearly cloudless all day and there was no exception once we arrived at our destination.  Apparently, that day, Karma was in our favor.

The pure white, snow-capped wonder stood proudly over 8,800 meters high against the days warming sun.  I couldn’t help but to giggle at the site of her and, right at that moment, all of us hastily took out our carefully stowed beers and made cheers in celebration for such a wonderful day. 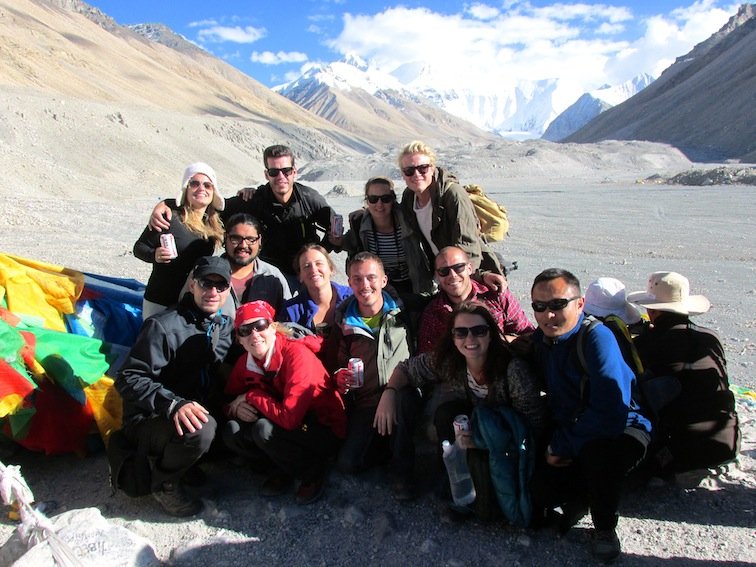 We enjoyed the view of Everest while drinking our beers up until last light from our little pedestal where we then took the bus back to EBC.  All in all, the long journey was well worth the effort we put in to get there.  That night it just got better as we stood on top of the world to enjoy the milky way and the clear, bright sky as the stars smiled down upon us.

Have you ever dreamed of being on top of the world and hiking to Mount Everest Basecamp?