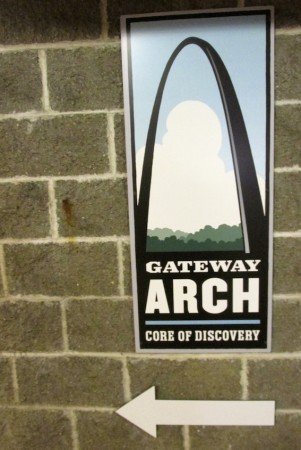 You would have never guessed by the sheer size of the Gateway Arch of St. Louis Missouri that it was constructed in as little as 2 years.  What I found even more impressive was the fact that it was built back in the 1960’s.  But why?  Why challenge modern architects to complete such a massive and elusive masterpiece of modern architecture?

Well…to symbolize & memorialize the role St. Louis played in the westward expansion of the United States, of course.  To create a symbol so grand that people of all classes would look at it and contemplate its structure while admiring its beauty.  And it worked.

All thoughts that were going through my mind had vanished.  I had been previously contemplating all the other places I had and was about to travel to.  The time I had walked along the beach in Costa Rica and found fresh coconuts, my current road trip across America…even my upcoming visit to the islands of South Asia where I’ll have the opportunity to stay at a breathtaking hotel in Bali!  It was all gone simply because of the vision of one man; Eero Saarinen.

Who says one man can’t make a difference?  I was really anxious to check out the inside of the Arch to see exactly what held the structure together. 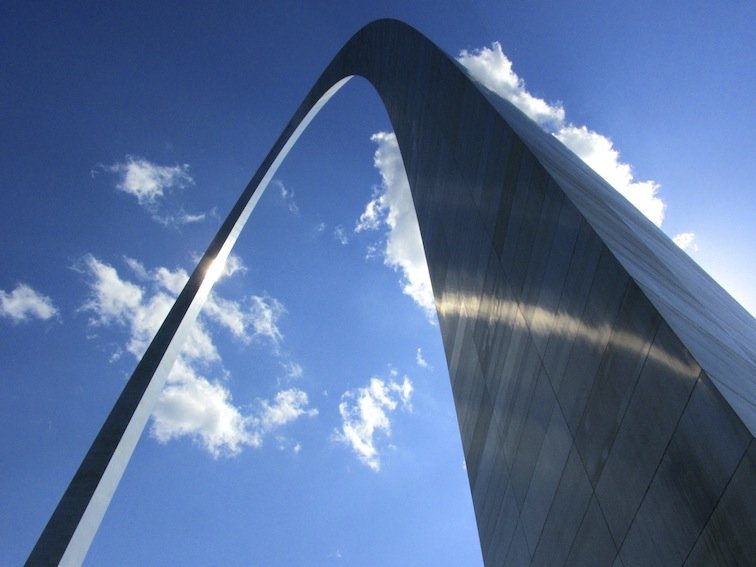 The Gateway Arch from the base.

As my buddy & I walked up to the base of the Gateway Arch, I had no idea at exactly how big this thing was.  I’ve seen pictures on the news, through various parts of the internet and even in numerous blogs but never had I gotten a first person view like this.  If it could be summed up into one word, I’d simply say impressive.

Walking to the base and looking up, you quickly get a good idea exactly what man is capable of accomplishing and it is just stunning.  From the Arch’s front door it seemed like the wall went for miles into the sky!  Anxious to make it to the top (after all I love a good vantage point) we paid for our tickets and took the tram ride inside to the peak. 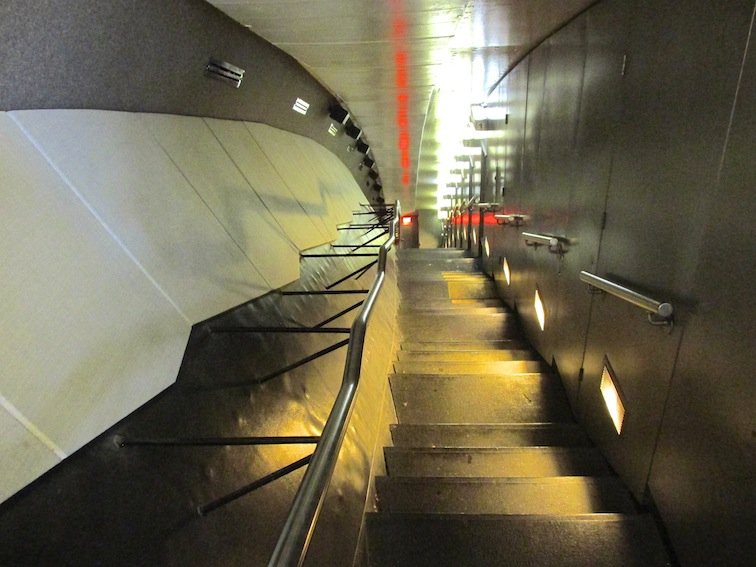 The stairs leading up to the top of the Arch.

Getting our tickets, we walked up the stairs and passed 7 of the 8 compartments which were all full.  The very last one had only 2 others in it so my friend and I jumped in and began to make our rickety way to the top.  The trains were really small…definitely not a place for someone who’s claustrophobic.  Squeezing 5 people into the egg-shaped container seemed a little much but hey, we made it!

“Neither an obelisk nor a rectangular box nor a dome seemed right on this site or for this purpose. But here, at the edge of the Mississippi River, a great arch did seem right.”

After about 15 minutes we finally got to the end of the tram ride and had to walk the rest of our way to the top by climbing up the stairs.  Inside the main area held numerous sectional windows where you could look out over the city.

It was a unique view, looking down from 630 feet high.  To one side sat the Mississippi River, which had been flooded at the time.  At around 3 o’clock (which was the time we ascended) you could find the shadow of the entire arch directly below you in the water.  It was so big you could fit a small ship in there!  To the other side was the city hall, a public park and hundreds of people walking around that seemed to be about the size of an ant. 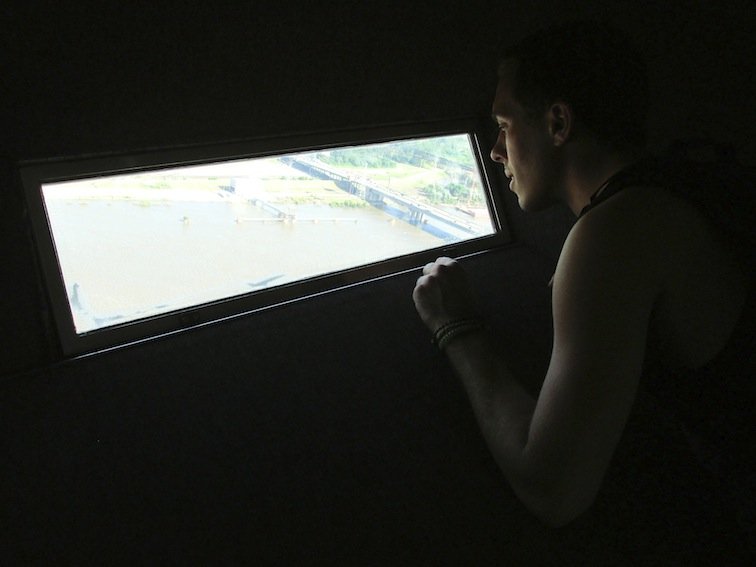 Looking outside the top Arch Windows.

After spending a good 30 minutes enjoying the view and taking pictures, we made our way back to the tram where I took the 15-minute ride down to the base of the Arch.  I then exited and browsed through the diverse animals, historical figures and watched a movie that made up the internal organs of the museum.  I never knew that this was, in fact, the tallest man-made monument in the United States…so impressive! I wonder how tall Mount Rushmore was?

Miniature model of the Arch Construction.

I found this really cool miniature model of the Arch be constructed back in the 1960’s and must say this was my favorite.  It was very unique, the entire experience.  I really enjoyed the ride to the top but the knowledge of how they constructed the masterpiece far surpassed it.  Now I can finally say that I’ve take the Gateway Arch in St. Louis, Missouri of the good ole’ bucket list!