If you haven’t read the first part of the story, check it out here before continuing!

The guide informed us that breakfast was to be at 8 am. If you remember what I said about the rules of our self-governed experience, then you should be expecting what we did next.

As soon as it was light enough to see through the misty morning, we popped on our harnesses and clipped in. Before breakfast, we were flying and hooting our way above the jungle with only ourselves to enjoy it. By breakfast time we had done the loop four times and were four times as hungry. 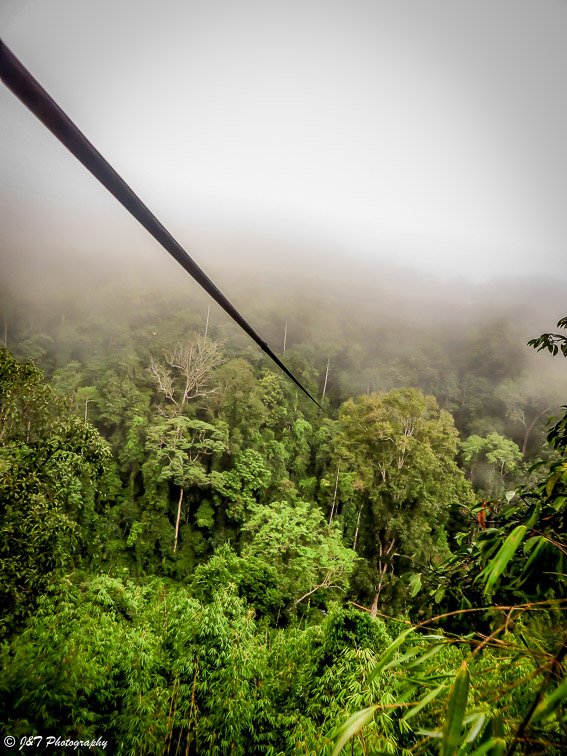 Usually, I don’t think its worth the time to talk about food, but the fact that we were being served delicious hot eggs and veggies in a treehouse in the middle of the jungle was incredible. Nicely salted, filled with garlic, and dripping with saucy goodness, we devoured our food to the energizing beats provided by Torin and the famous waterproof speakers.

Fueled and ready to go, we zipped out for a day that was all too similar to the flying dreams I have had since I was a kid. 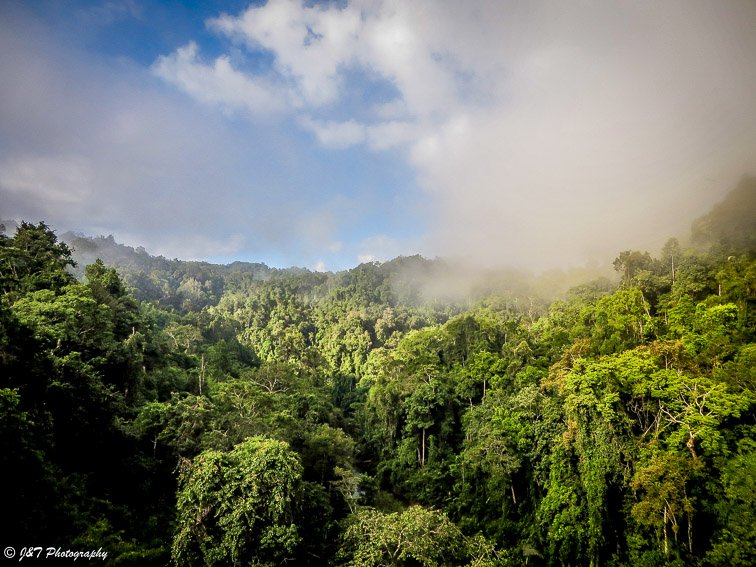 We set off for the treehouse that would be our home for the second night. There was a surprising amount of hiking involved, but it felt good to work for our pleasure. The hike was also broken up by some mind-blowingly awesome zip lines including a 500-meter giant that gave us plenty of time to contemplate the meaning of life while flying between two mountains.

“I decided the meaning of life was to zip line.” 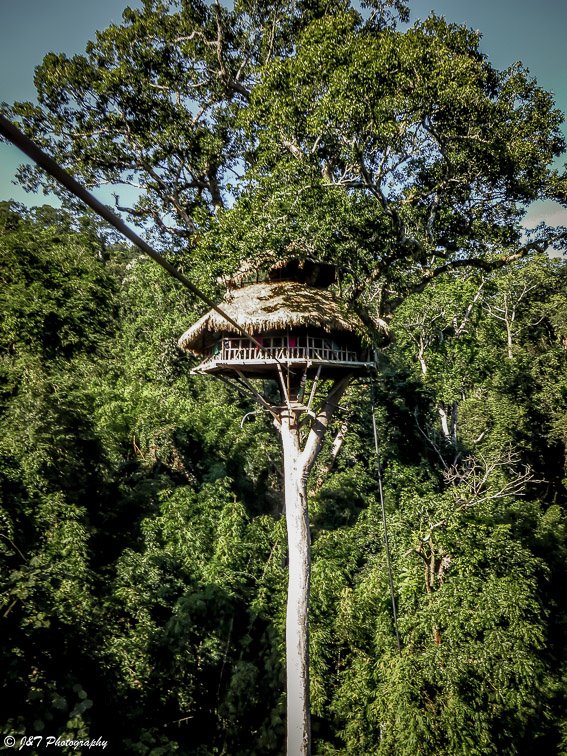 Upon arriving at our second tree house, we were again faced by the sensation of childhood fantasy coming to life. This treehouse was bigger and far more impressive. It had three levels counting the zip landing and was a casual 10 meters higher than the last, towering above the world at 47 meters! It had all the same amenities, but somehow the view from the bathroom was even better.

I forced myself to poop twice. 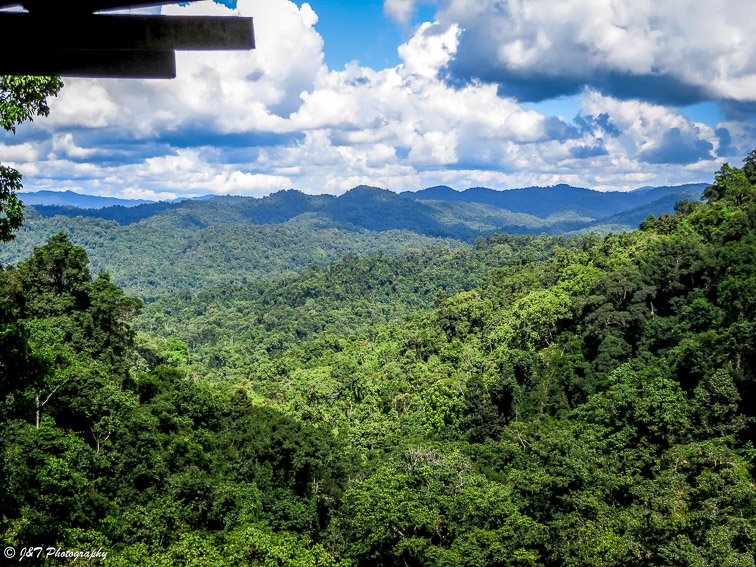 After getting settled, our lunch came flying in and, wouldn’t you know it, one of the dishes was a plate full of French fries. (A little soggy, but hey, gotta give it to them for trying).

It was at this time that I made the fatal mistake of boasting about being the only one that hadn’t been sucked on by a leech.

Thankfully no one had started eating because when my friend pointed to my foot and asked if I really thought I hadn’t gotten a leech, I was more than dismayed to find the makings of a murder scene coming from below. 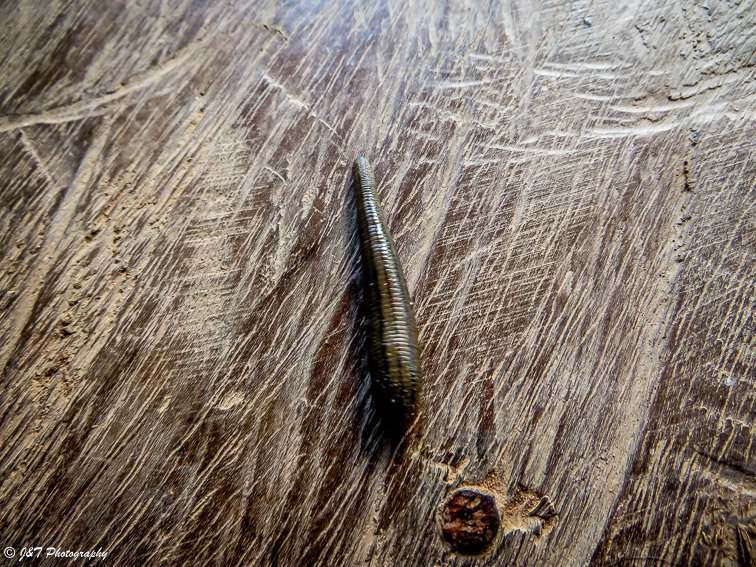 Somehow, a big one had attached and let go without being nice.  Since leeches release an enzyme that makes blood flow more freely, I had covered the ground around my chair in red and even left spots all around the treehouse leading up to the third floor. The whole time I felt absolutely nothing and was even more amazed than scared or grossed out. After that, I tripled my efforts at checking my shoes.

Lunch was finished and the call for ziplining hit so hard we wouldn’t have stopped even if we saw a gibbon.

The loop takes about an hour to complete, with the option to do parts of it in a circle until you were ready to move on to the next. As if awesomeness couldn’t be any more awesomely awesome, a rainbow appeared and could be seen from several lines. Two lines crisscrossed so you could wave to your buddy as they whizzed passed. One line got you going so fast you could feel your cheeks puffing out in the wind.

“So, from noon until dusk we enjoyed the unique and fantastical experience, living like a gibbon.” 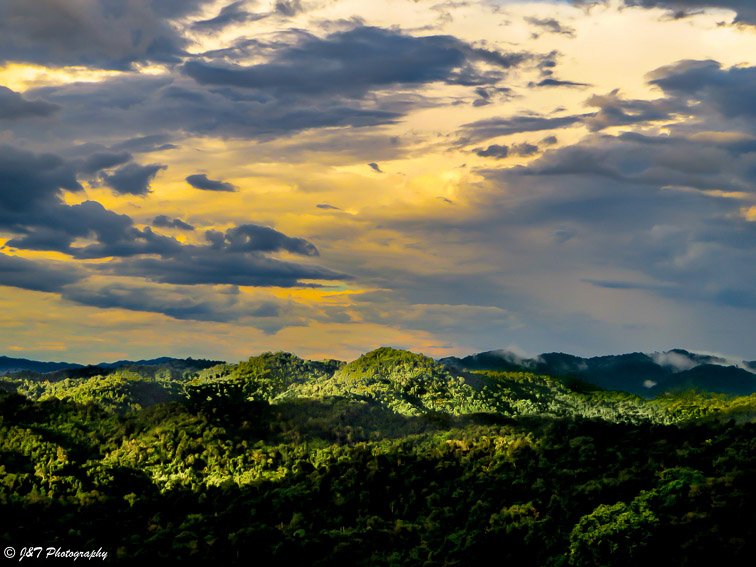 On the last zip line leading into the tree house, I felt I had to do something special to commemorate the closing of such a good day. So, about half way down, I laid on the brakes and stopped myself in the middle of the line. The sun was setting behind and the scattered cumulus clouds over the mountains were cotton candy shades of orange-pink, purple and blue.

“And there I was, dangling with my feet 45 meters over the canopy, getting to soak it all in. I was on the 100th floor of life’s apartment building and I may as well have been floating.”

I got to watch the guide zip in with evening tea in his free hand and I shouted out my order from the line. In all, I spent about 15 minutes out there before walking myself in with my hands to enjoy tea and dinner. 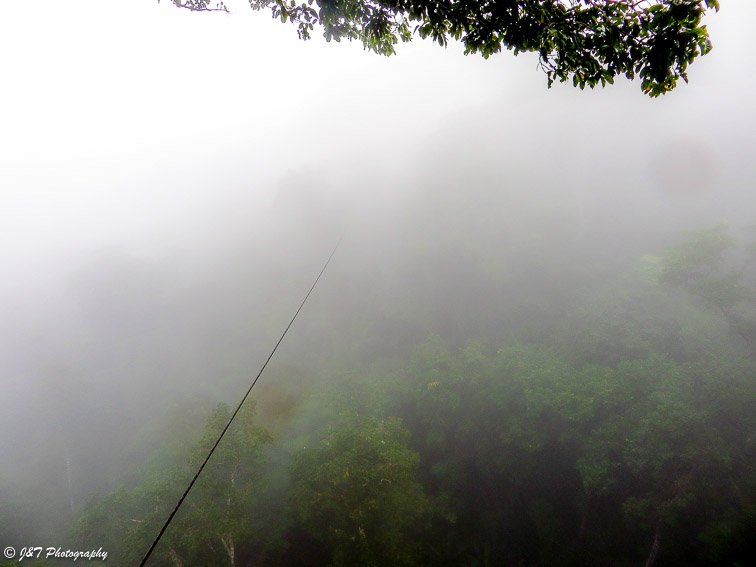 The morning of our last day, we had a big surprise when we looked out the of tree house. We could see…..nothing! The cloud around us was so dense we lost sight of the zip line just a few meters away from the exit point. I was skeptical, but after our guide arrived with hot tea and gave me the ok, I went out with most others still sleeping to try and find the forest again. 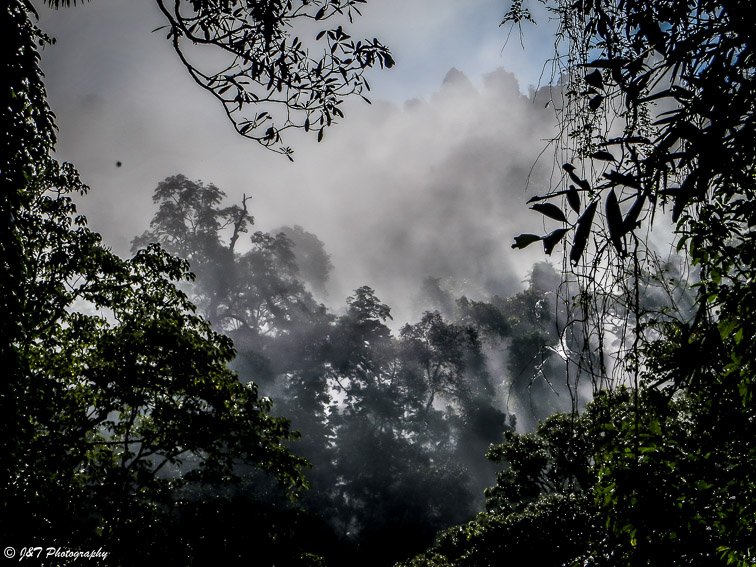 Trees blinked in and out of sight as I tried to keep my mouth closed and my eyes open. So much water had condensed on the line that I was getting sprayed as if going down a water slide! There were also a surprising number of spider webs waiting for me to eat as well.

“Watching the treehouse fade into few on my way back was super cool, but I must admit I prefer breakfasts of hot eggs and toast than metallic water and spider webs.”

After we ate we said goodbye to the treehouse and went to take the last of our zip line journeys down out of the jungle. We got to stop at most of the other tree houses and each afforded its own amazing view and magic surrealism. Some were only big enough for two people and some were quite large, but the one we stayed at on the second night was by far the coolest.

I kept waiting for it to get old, but every zip line began and ended with the same childish excitement all the way to the end. When it finally came time ride our last line, no one wanted to go first. 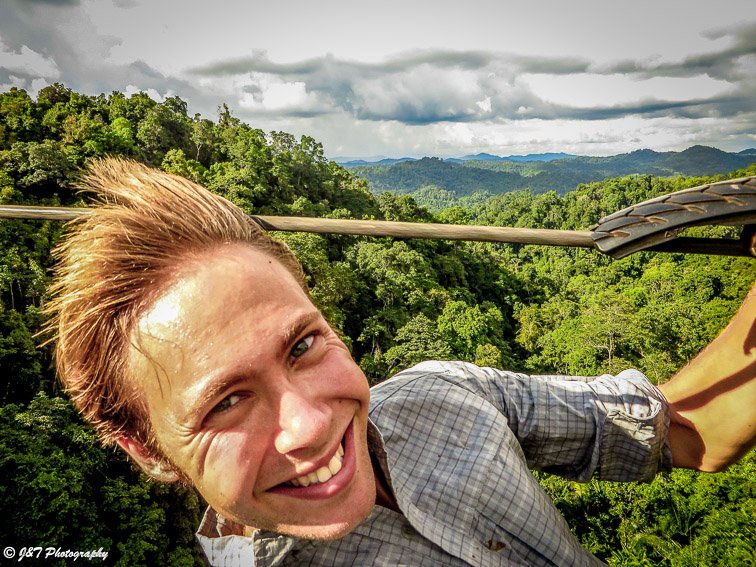 I really don’t know how many times I zipped on the Gibbon Experience, but I would put my personal number at over 60 on about 25 different lines. Even though we didn’t get to see a gibbon, we got to live like one and help save their kind through doing it. If we didn’t have so many zip line selfies, I would not believe it actually happened.

We soon began our journey back to Thailand, with new life long friends and another unbelievable travel story to share with the world.

What was your coolest zip lining experience?