How to Trek Further Off the Beaten Path in Northern Laos 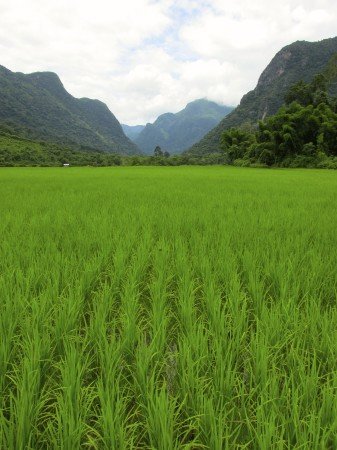 Northern Laos will go down as one of my all time off the beaten path locations to venture off to in Southeast Asia.  This is for a few reasons: for one, the people here are extremely friendly.  Two, the scenery is astonishing both near and away from the rice fields.  And three, the culture is as rich as it gets with authentic food, beliefs and ways of life.

But as more and more people are beginning to discover the pure beauty of this natural land, it’s becoming more and more difficult to venture away from where Westerners flock to.

So the question stands: how do you go even more off the beaten path than you already have.  You know, how do you get to the point to where you don’t see another backpacker for weeks on end; if you’re even lucky enough to get that far away?

The answer my friends, is not by car, boat, train, plane or motorbike…no.  It’s by foot.

Off the beaten path in Laos

After spending the first day rushing to see the tiny village of Chantanohm Banna, I really felt compelled to go back and spend more quality time with the local people.  So, saying goodbye to my newfound friends from Spain, I gathered a few more adventurers who were looking to trek into this vastly unexplored region of Northern Laos and we began the hike in. 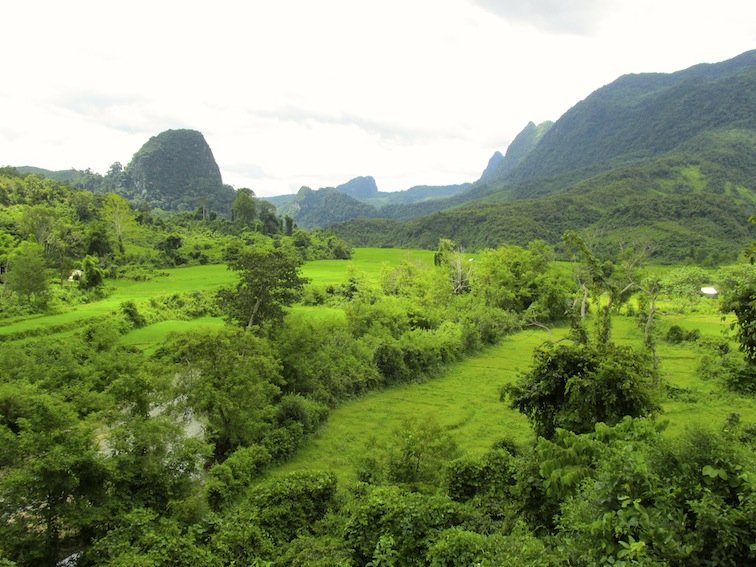 Today I noticed the pace was considerably slower than previously, which was nice.  Where it had taken us only an hour to reach the village the day before, we got there in about twice that time today.  There was time to stop and take in the view.  To breathe.  To enjoy the time I had.  And all four of us agreed, we loved it.

Being that I was enjoying myself so much more, the time actually went by quite quickly.  Before you knew it the four of us had passed through the shallow creek, walked into the cave, jumped up & down on the bamboo bridge and were looking at the bright baby blue lettering of the yellow sign just out in front of the village. 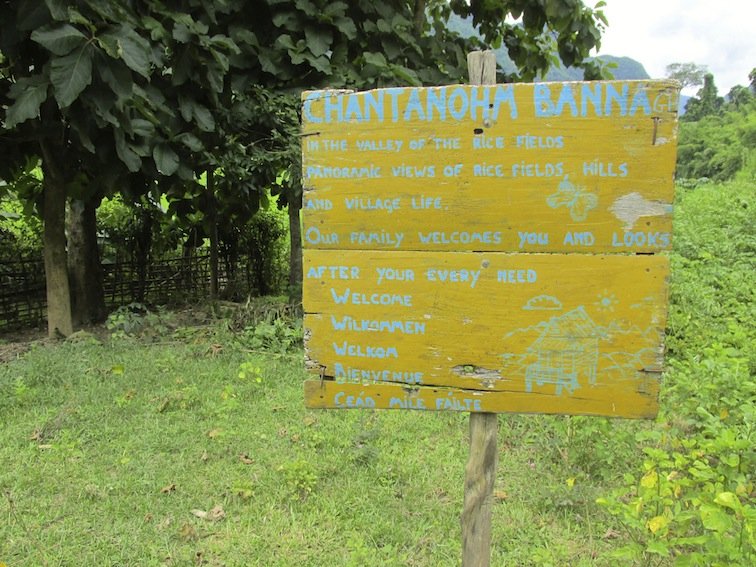 It had just reached 11 am and we still had so much time to enjoy ourselves!

But after reading the welcome sign, the four of us kind of split up and started looking around as we walked in the same general direction.  Tethered clothes were hanging against the wickered bamboo houses to dry after being washed in the river, hens walked by us fearlessly protecting their little chicks and even a few old war remnants lied down on the ground precariously placed against trees and large rocks for remembrance of harder times. 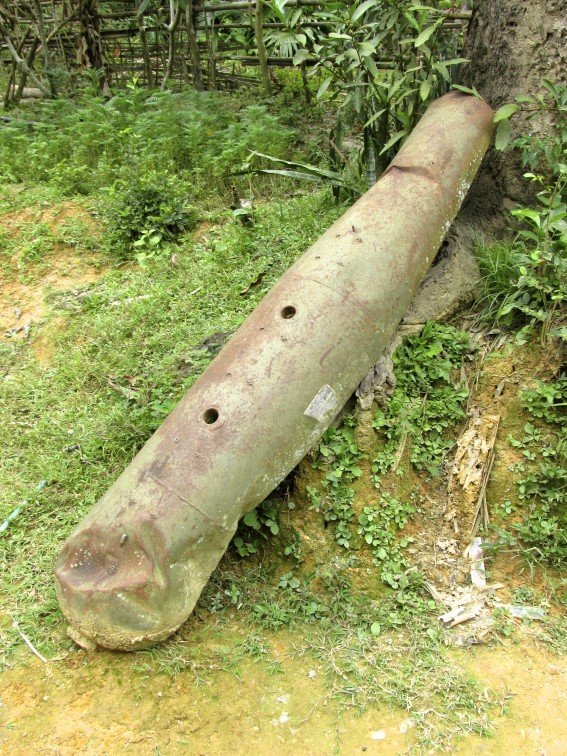 I thought it was very persuasive to see such a destructive part of history right in front of me let alone to be stepping into a village that had direct contact with the military during the war.  Truth be told, I was a little behind on my history at the time so was a bit alarmed because I didn’t know how the local people would react to an American visiting their village but, to my surprise, they were quite happy to see me!

I think that’s the thing I like most about Laos people: they’re always smiling.  Not only that, but when I had approached any local about their honest opinions of Americans and the war, all of them came up with the same response that went a little something like this: “What’s in the past, is in the past”.  Of course, it wasn’t in those exact words as the English was a little broken, but this was the message I always got…and loved it! 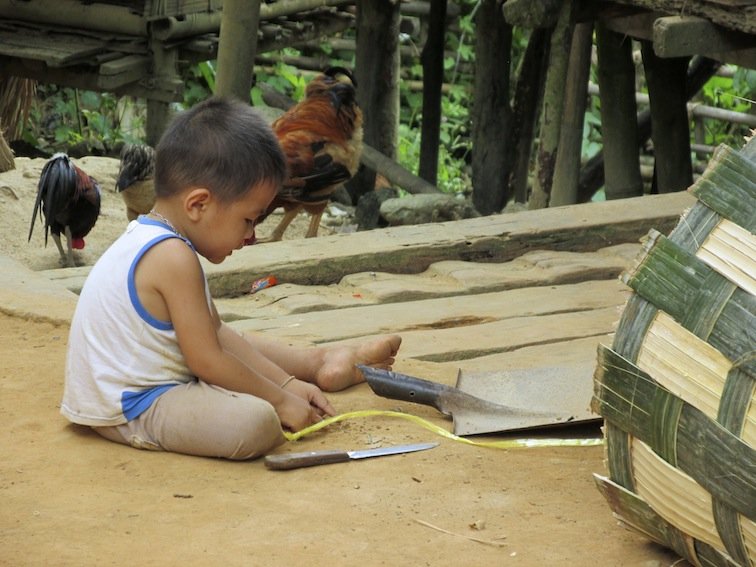 Walking past the remnants and further into the village, I began to see a few of the locals going about their daily chores.  The first being an older woman who we later began to call “Ma ma”.  She was working at her small restaurant that had popped up for the few travelers who came through.  On the ground next to her were two little boys; one was hiding behind her leg and peeking out at the four of us as we hiked through while the other was playing with some rather dangerous utensils.

I found the second little boy particularly interesting because his tools of choice as he dug into the hard clay ground was a sharp knife, rusted shovel head and a long piece of yellow twine.  Any mother in her right mind would never allow their child to play with tools as dangerous as that, at least not back home.

But here they took on a more “survival of the fittest” point of view from what I’ve gathered.  The children grew up much more quickly and along with that gained common sense at a very young age compared to the kids back home. 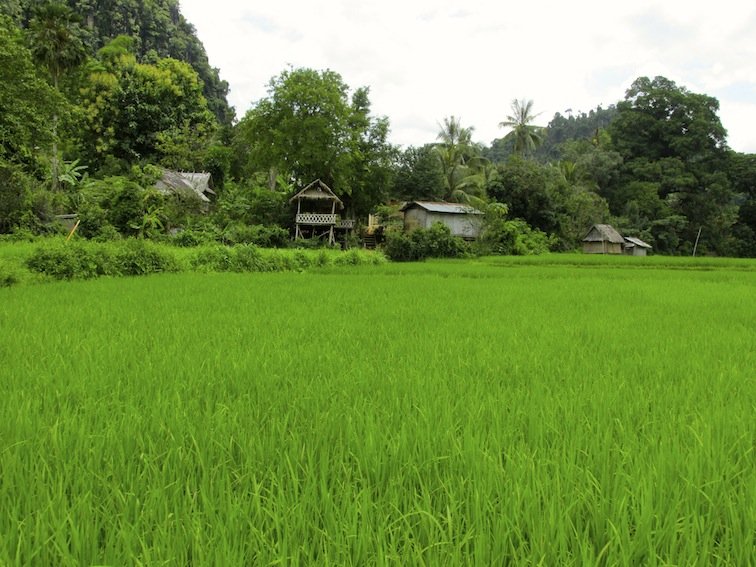 After saying hello the group of us walked past the locals and into the rice fields.  It was interesting getting an up close view at the result of the villager’s hard labor.  Apparently, they grow the rice three times a year and collect it all for their family and the surrounding villages.  Anything that’s extra they simply sell to people in the major cities who come out here to collect it. 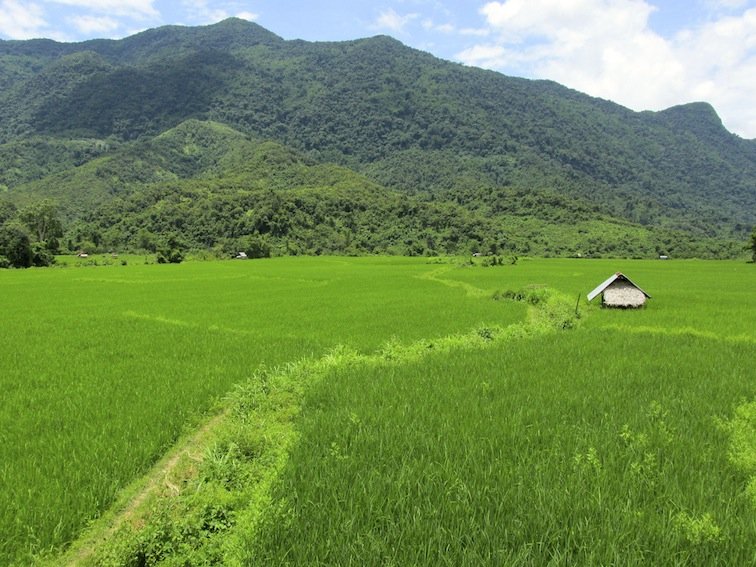 After venturing around we went back to Ma Ma’s small restaurant and ordered some lunch.  I got something simple: egg fried rice that contained some greens and other herbs.  I had no idea how tasty it was going to be!  Truth be told, it was probably the tastiest fried rice I’ve ever had in SouthEast Asia let alone in my life. 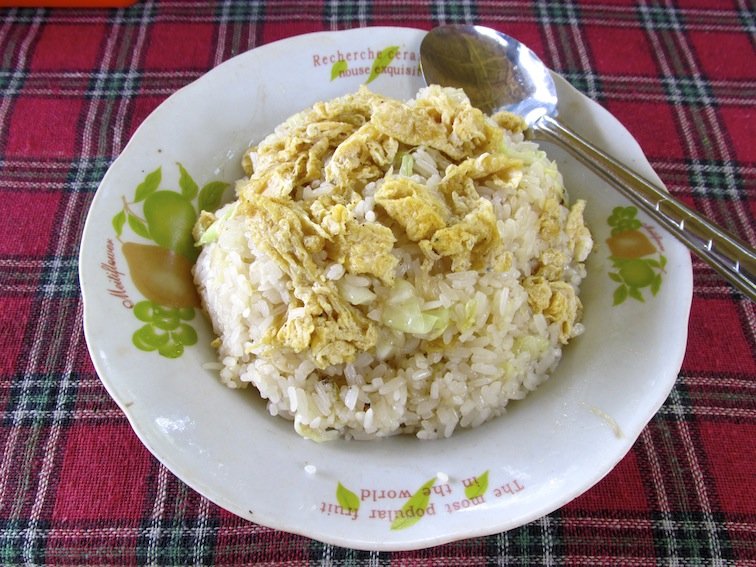 Finishing up lunch we began to walk around the village and say hello to the villagers as they completed their chores.  Some of the younger girls were weaving baskets while the mothers tended to their newborn children.  Every once in a while some of the kids came up to me for a piece of candy so, quickly grabbing a few pieces I handed them out as they scampered away smiling and giggling. 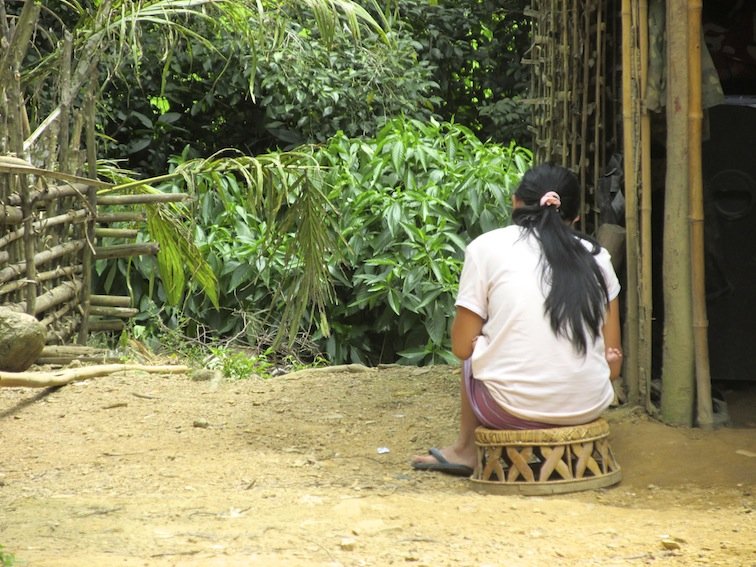 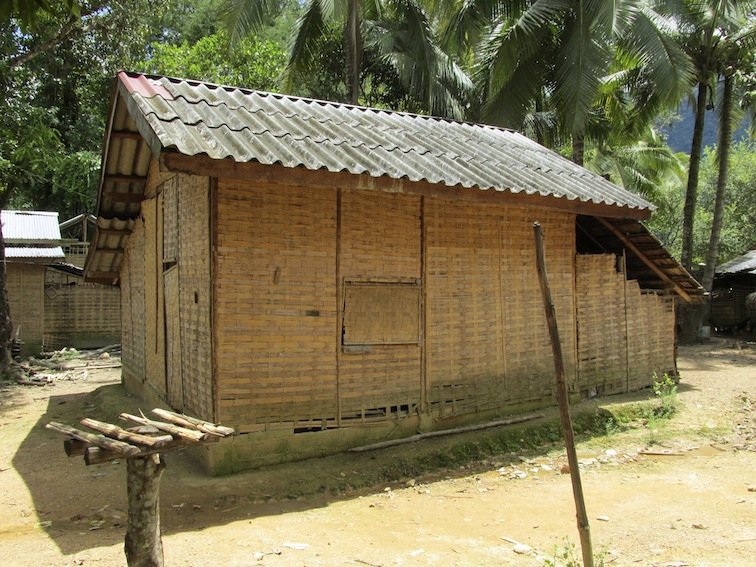 It was nice to see how well kept this village was.  It was obvious that the money donated to them was going into the upkeep of their homes and supporting their authentic way of life. 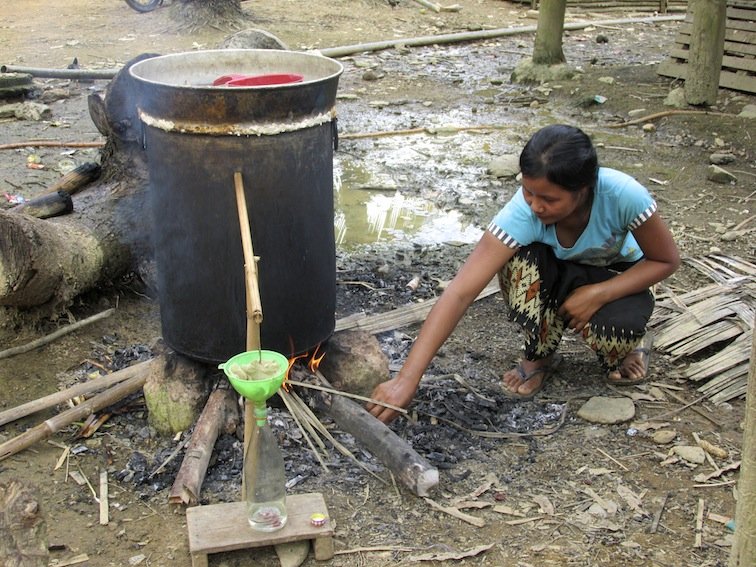 We even had the pleasure of watching one of the women make Laos Laos (a local liquor they used for drinking) out of an old metal canister.  It was about 4-5 foot high, a good 2-3 foot across and sat on top of an open flame fire.

Sticking out the side was a bamboo shoot that shot down to a green funnel with a small folded cloth in it which then slowly filtered into a glass jar.  The children running around the entire contraption was a little frightening as thoughts of them tripping and falling on it ran through my mind but, then again, this is Laos and things operate on a totally different scale over here. 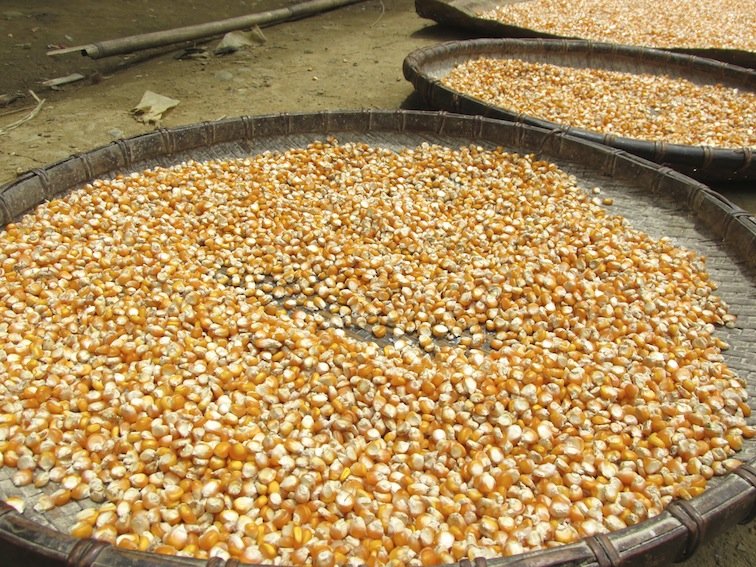 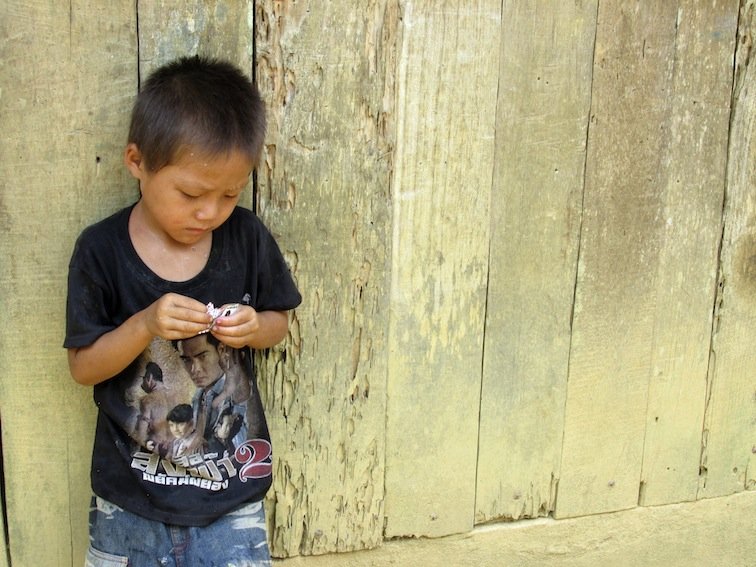 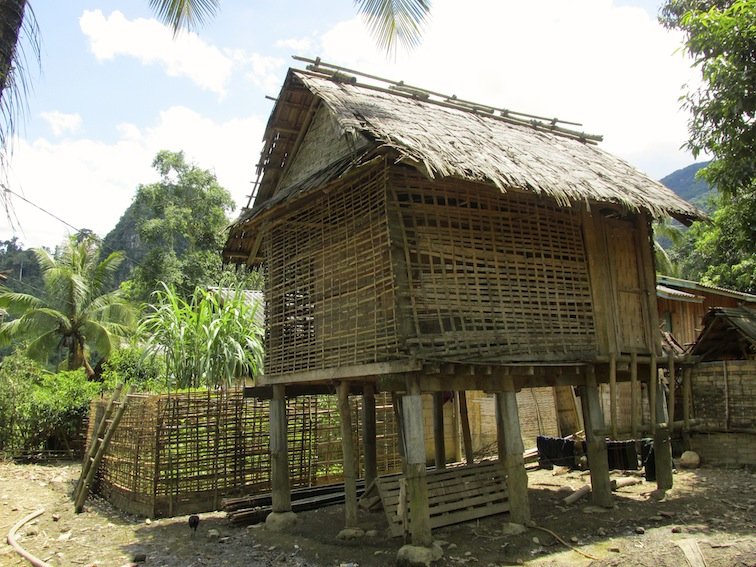 Walking through the rest of the village and out the back, we merged back onto the old dirt road and began to hike deeper into the jungle.  The weather was hot…really hot.  My shirt was drenched with sweat and no longer acted as a dry protectant but simply a heavy wet cloth sticking to my skin.

The scenery, on the other hand, was breathtaking.  The mountains rolled gently into each other like green waves in an endless ocean and for the duration of the entire hike in we only saw about 3 or 4 locals working in the jungles gathering sticks and logs for their village. 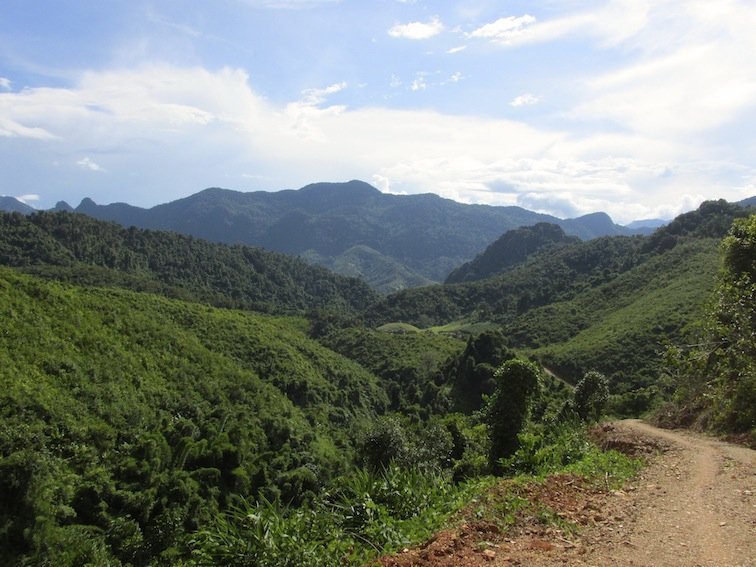 After climbing up the seemingly endless mountain and switched back down the hill, nearly plummeting towards the crevice of the next mountain.  At the bottom was another small creek that ran a little heavier than the last but was still very clear and cool to the touch.

Giving in to the urge, we all dressed down and jumped into the cool water.  I could feel my body temperature drop instantly as I became at one with the river.  Submerging all of myself underneath and feeling the rushing water blow past my skin, I came up for a breath of air and scanned the surrounding area.

A small bamboo bridge ran from one side of the creek to the other to my back while in front of me, as I looked up the river, I could see the creek turn right and wash below a large fallen tree entangled in vines.  On each side of the water was the dense Laos jungle with nothing more to hear than running water and the beautiful sounds of nature.

Feeling fully refurbished, everyone dressed back up in our sweaty clothes and kept trucking forward into the jungle for another 2 hours or so.  Passing by a few landslides, some VERY large caterpillars and billions of other insects, we eventually came upon a man from the next village who was sitting on the ground. 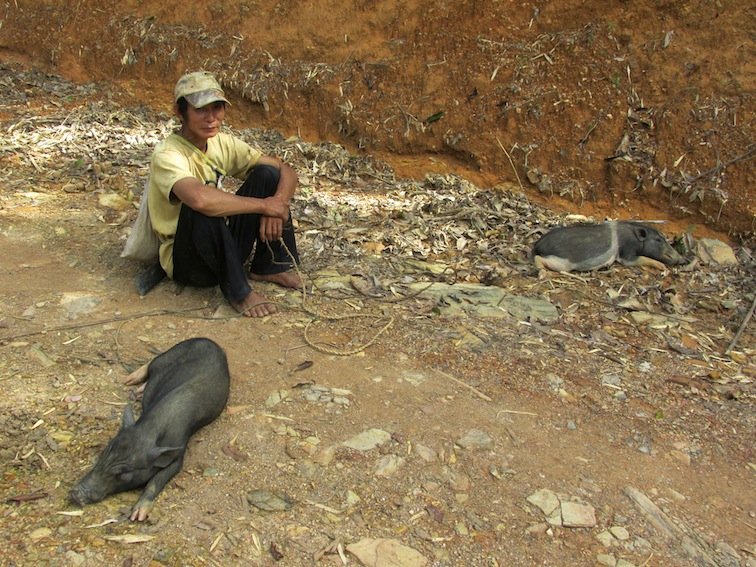 Next to him were two pigs tied to some rope by their feet and obviously exhausted from the heat.  The fate of these little guys was obvious: dinner.  The man had aged in the wearing sun and wore no shoes and little more than long black slack, a yellow shirt, and a tethered tan baseball cap covered in dirt.  On his back was a small white bag tied around his upper torso.

He seemed surprised to see foreigners so far away from the main village but, with a friendly smile, waved at us as we passed by and pointed behind him toward the mountain top. 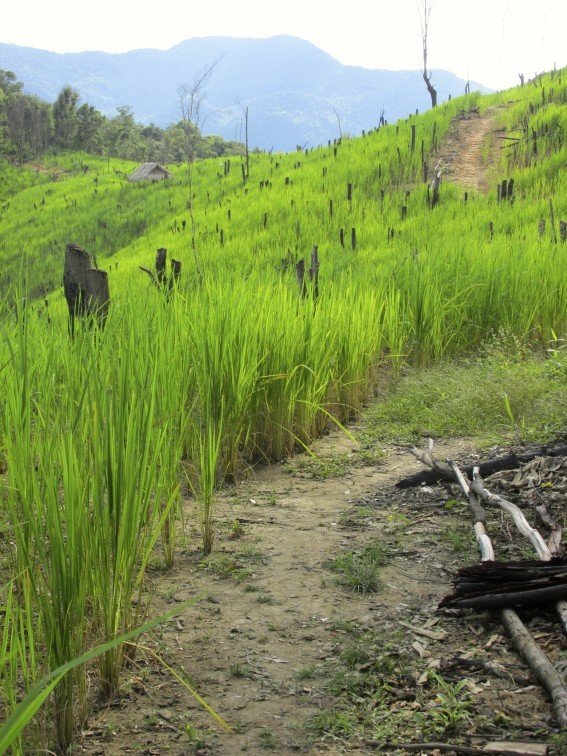 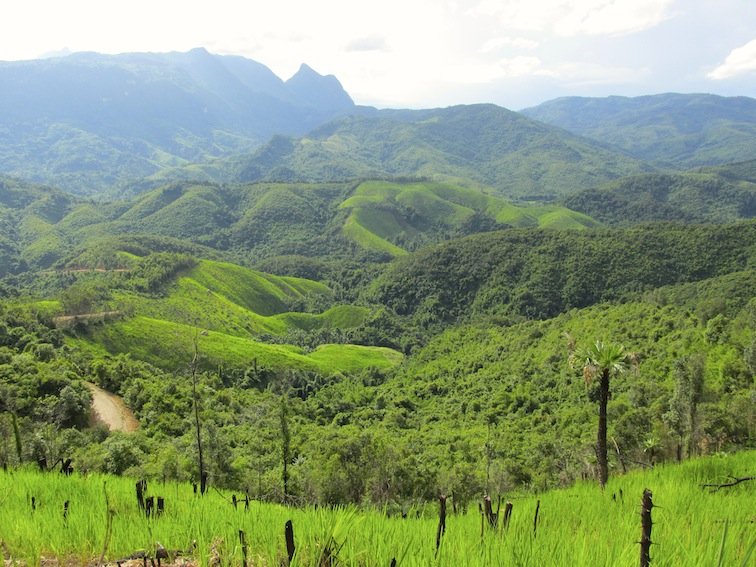 Taking his advice we climbed up this rickety bamboo ladder and followed the trail to what must have been the most scenic view I’ve witnessed in Northern Laos.  You could easily see for miles on end as the rice fields mixed into the jungle.  Small bamboo huts were sporadically mixed in with the rice fields and the bright green leaves shined brightly against the rays of the sun.

“The picture I took did the view absolutely no justice.  It was a thing of beauty…and silence.”

It reminded me of the breathtaking beauty you saw while overlooking Waimea Canyon in Hawaii…it was all just stunning.  Taking a small break and checking the time, we fell just short of making it to the second village in time so had to retreat back to the main town and our homey little bungalows.  In all, we spent about 8 hours hiking and exploring the little gems we found along the way.

The trek in was well worth the effort. I just know that next time I’m going to bring camping gear and an ultralight tent so that I can go even farther into the jungle and sleep where the villagers slept along the way.

How far have you ever gone to get off the beaten path?