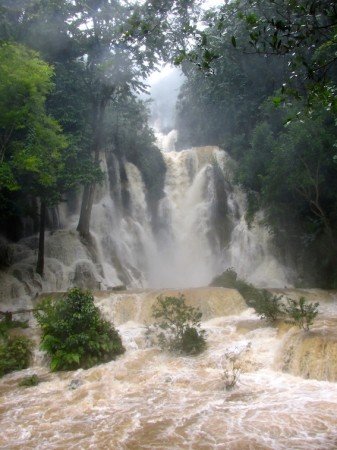 There’s kind of an underlying knowledge that, when you travel and it rains, most people hate it.  Why does this have to be the case?  I get an exponentially large sense of excitement when it rains while I’m traveling.

Maybe it’s because I’ve spent so long snowboarding in Aspen that I just miss the smell, sound, feel & taste of it.  And I don’t care what anyone says; rain does have a certain smell that is hardly recognizable…but if you really pay attention, you can smell when it’s coming.

To me it’s pretty neat because I’ve found that from place to place, the smells can vary just like they do from city to city and mountain to mountain.

While I was in Luang Prabang with a friend I met at the local hostel, we decided that it would be a great idea to rent a scooter and make our way up to the world famous Kuang Si Falls.

It turned into quite the adventure of crossing flooded roads, witnessing landslides and even helping a woman who nearly got pinned under a scooter in waist deep water as she lost control and drove into a ditch!  Lucky for her I happened to be driving by.

But in other words, a simple thing as a little rain can turn into one hell of an adventure.

Driving towards the outskirts of town, the roads were extremely wet, slippery and full of landslides.  It paid to be cautious especially since the last time I was on a scooter I wiped out in Chiang Mai while on the hunt for temples…now that was not fun.  The roads were pretty dangerous, in some areas flooded to the point where we had to get off the scooter and push our way through it.

This was probably not the smartest move I’ve ever made but, as it turned out, today was a day full of not-so-smart decisions.  At least we weren’t the only ones making bad moves; that’s when we came across the young woman from China who had driven her scooter head first out of the flooded roads and into the ditch; successfully submerging not only herself but the scooter as well.

After we helped her out of the predicament, she came up a little frightened but virtually unharmed. 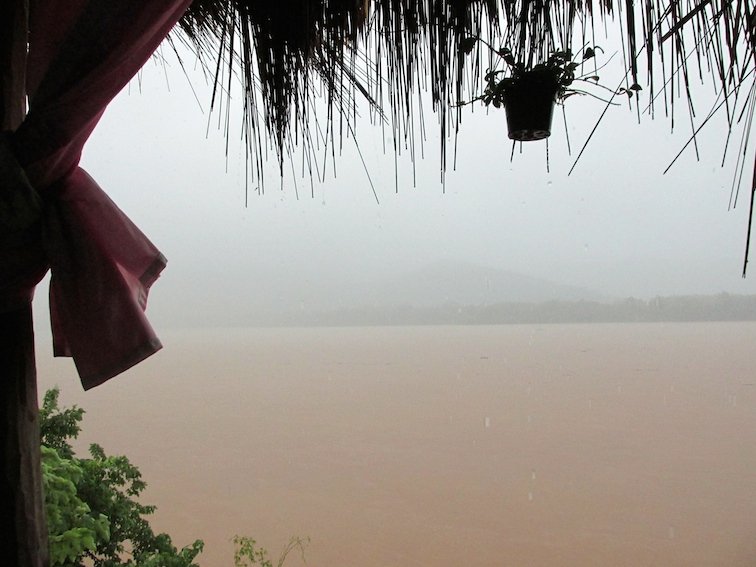 As we continued our journey to the falls, we passed by a few small homes and business, eventually pulling over for a bite to eat at this small restaurant overlooking the river.  By this time, the constant and steady rain turned into a torrential downpour.

Looking down from our safe little haven, I realized exactly how serious a heavy rain can be in this part of the world.  Even parts of the land underneath our deck was being washed away by landslides into the river.  Scary stuff.  But after scarfing down a large plate of fried rice, the rain let up just enough so that we could continue our journey to Kuang Si Falls. 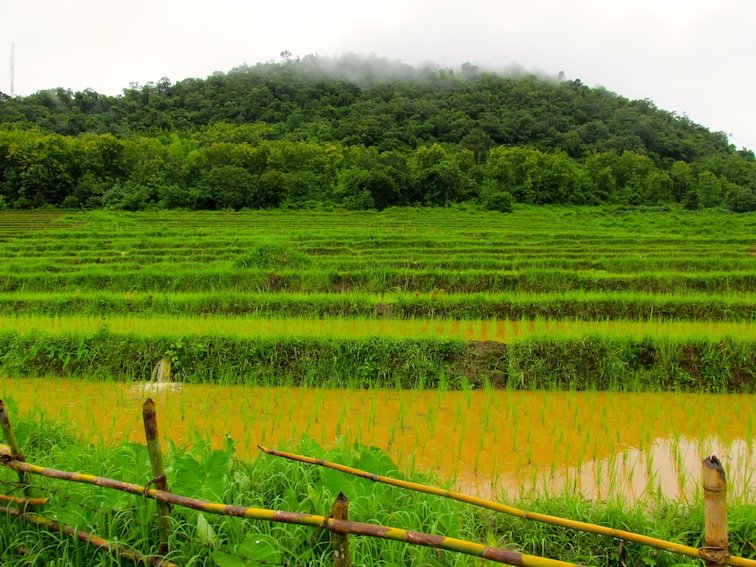 Luckily it seemed like the worst of the rain was over with, leaving us to enjoy the warm air whisping through our wet bodies as we passed by the scenic rice fields and small villages.  When we arrived to Kuang Si Falls, it seemed relatively quiet as most backpackers coming through came out during the sunny days leaving the entire place to ourselves. 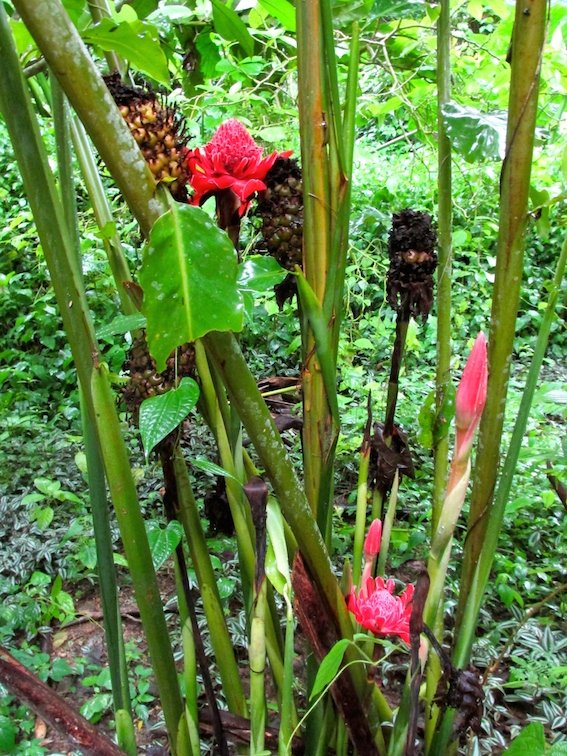 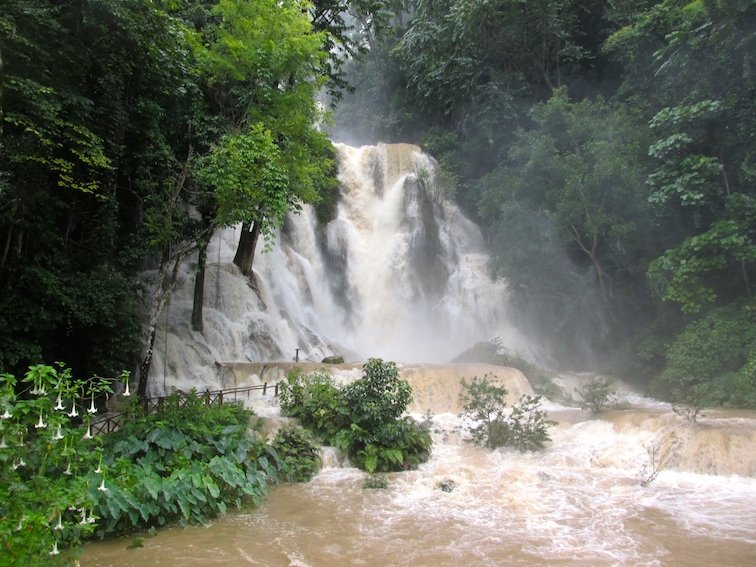 The flowers were in full bloom on various exotic plants and the waterfall had obviously been flooded making crossing the river nearly impossible.  Luckily, the small bridge was still a few feet above the water so after getting side blasted with the sheer power of the falling water, we made it to the other side and began hiking down the trails. 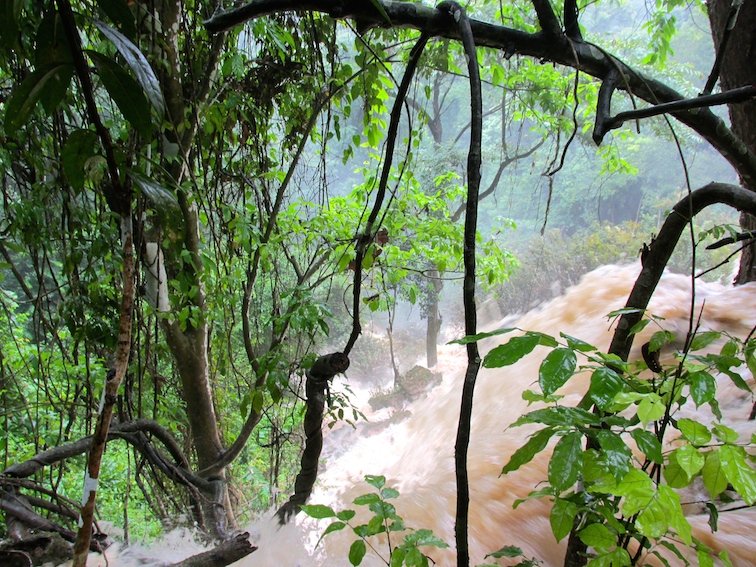 It was a steep and muddy venture into the rainforest.  Most of the trails were impassible without the proper shoes (which I did not have) so I simply continued the trek barefoot.  Hiking upwards on muddy 45 degree slopes, the ground started to level off at the top where we could overlook the top of the falls. 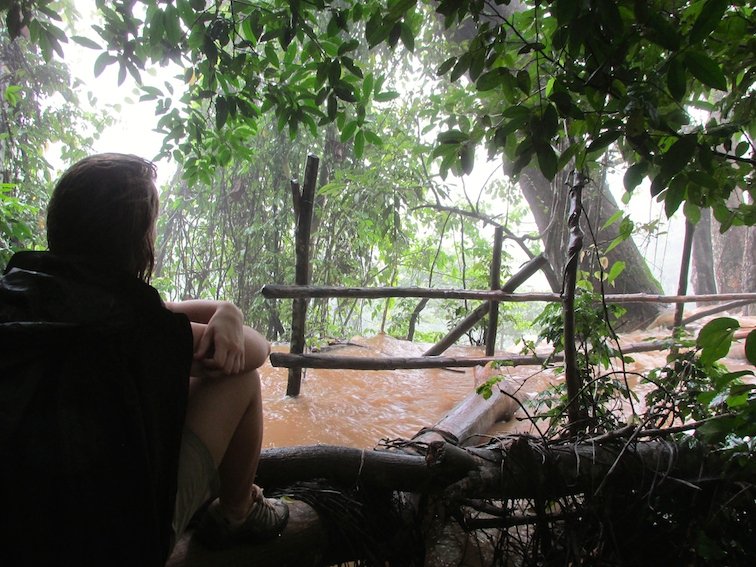 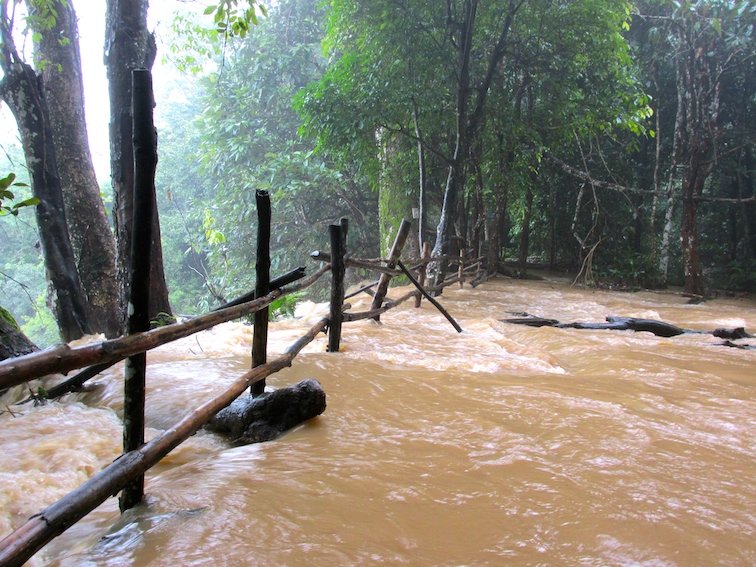 On a normal day, you can easily wade across in knee deep water but today was not one of those days.  Attempting to make a crossing at a few different locations, the water was all the way up to my chest at most which made it difficult to get a foot hold.

But on my third attempt, I finally found a good enough path to where I could make it to the other side.  As I said earlier, this was definitely not one of my smartest moves but I was up for the unnecessary challenge.  Once I made it to the other side of the falls, I found out that there was yet another path but instead of moving on, I decided to turn around to be with my friend.

All in all, I got the adrenaline rush I was looking for that day so after spending more time exploring the jungle around the falls we made our way back to the scooter and towards our guest house. 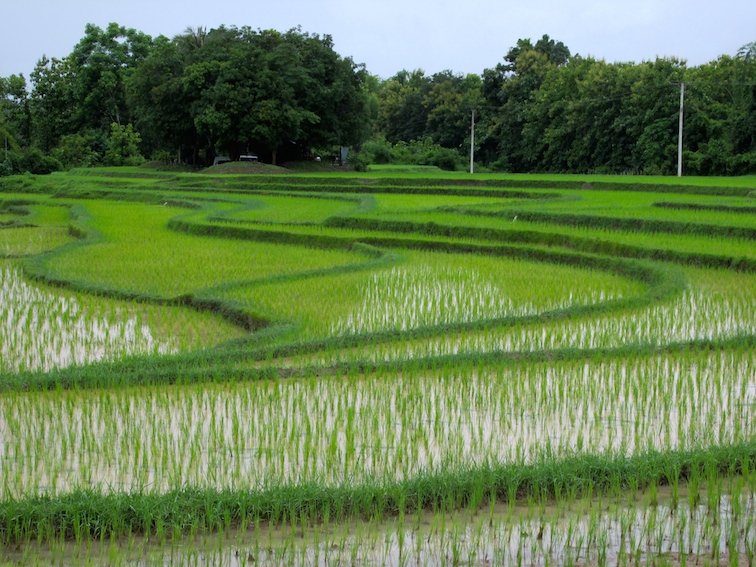 The drive back was just as beautiful as it was before.  At this point, the rains had ceased leaving us with only partially flooded roads.  It was nice to actually enjoy the surrounding landscapes and even nicer later that night as we explored the Luang Prabang’s night markets, biscuits, and world famous Laos Coffee.

Have you ever been to Kuang Si Falls in Luang Prabang?