Tubing in Laos – The Best Experience in Southeast Asia 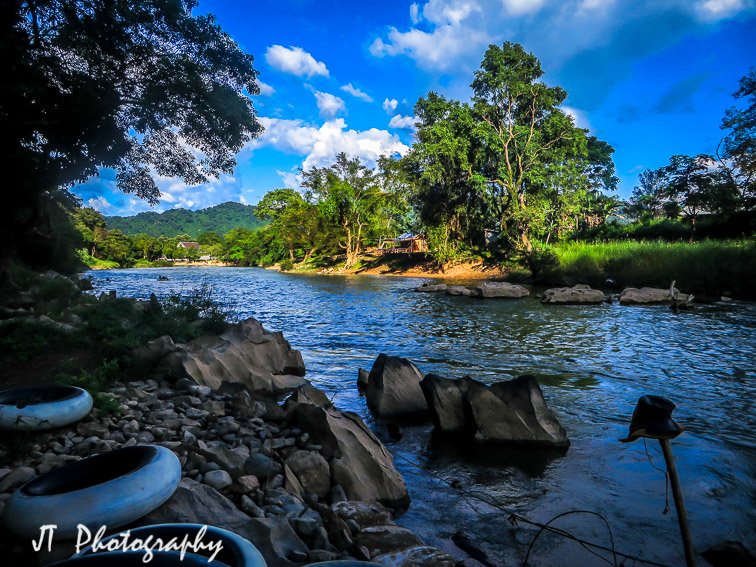 When most people think of Laos, they conjure up images of distant cultures, exotic landscapes, and delicious food.

Thousands of drunk foreigners tubing down a river lined with hundreds of bars usually does not make the mental list of your top overseas adventure tours to take while visiting this corner of the world.

Therefore, you can imagine my surprise when I learned that the small town of Vang Vieng was known for just this.

I had to look into it more, and discovered some even more surprising/unsettling facts.

How Tubing in Laos Changed & Why You Still Want to Go

In its glory days, over 200,000 tourists massed to this little spot of Southeast Asia every high season, the majority of them being Australian as well as expats living abroad.  Don’t ask me why, but Australians apparently love to tube. (Just kidding, of course I know why…tubing is awesome!)

In fact, tourists began drinking so much that they started drowning in mass numbers because they would pass out on their tubes and fall into the water.

Eventually, the Australian Government said enough is enough and bribed the Laos Government with a substantial sum of money to shut the attraction down.

“Understandably So: At this time, around 50 tourists who were backpacking around the world & visited Laos died every year.”

It seems crazy until you take the number of people and atmosphere into account.

Picture cramming thousands of people along a river lined with hundreds of bars all selling buckets of tequila for a few dollars. Becuase there is so much competition, most bars offer a free shot or something similar upon entry. Even if you visit two bars you may have already had too much to drink.

But visiting just two would just be ridiculous.

You are tubing on a river in Laos only once in your life, and there are hundreds of unique bars to see..with different games, party styles and music.

Make sense now? It does to me too.

Now that Iv’e sacred the tubes out of you, lets talk about how awesome this experience was for me after they changed it. 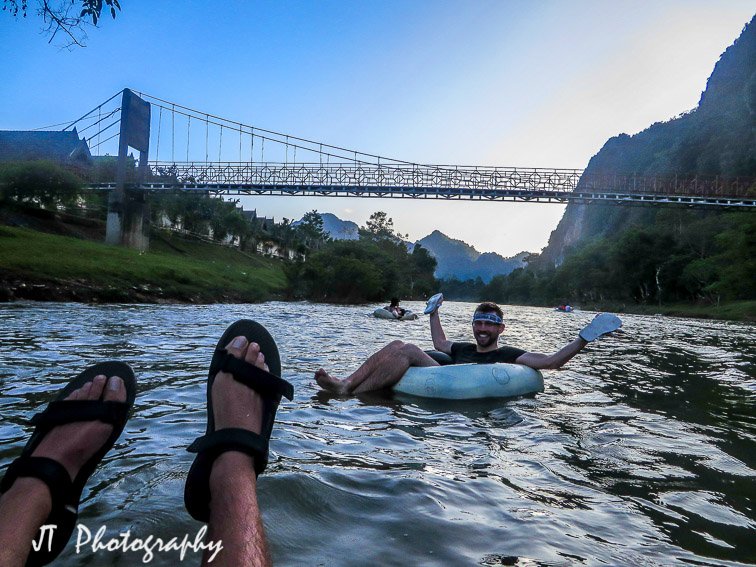 Instead of shutting down the whole attraction, the Laos government was merciful to the poor town of Vang Vieng, who was about to lose their livelihood.

Thankfully, all they did was tone it way down while leaving the core of the experience intact. As you can see, it is still an amazingly fun time, and one doesn’t feel the need to drink themselves into a coma. 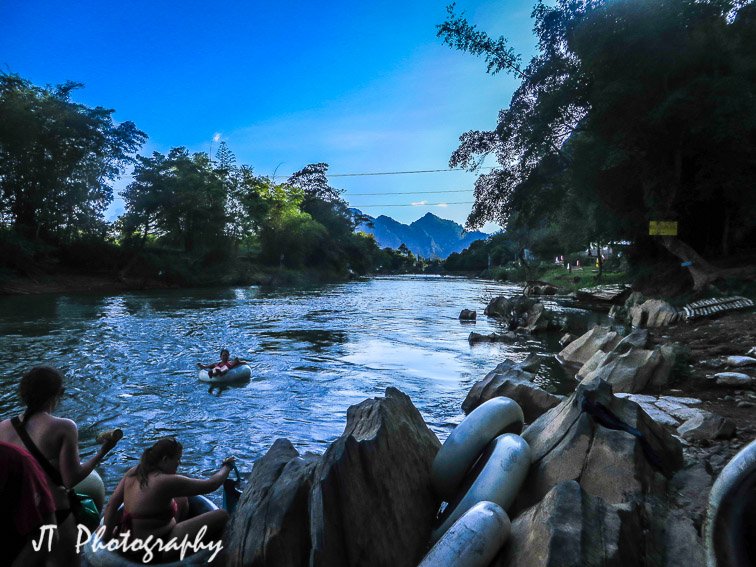 They way it works is pretty simple.

We rented a tube from a local shop for 15 dollars for the day and they drove us over to the starting point up river. We were greeted with music and games and when we were ready, they helped us into the water to start the journey! 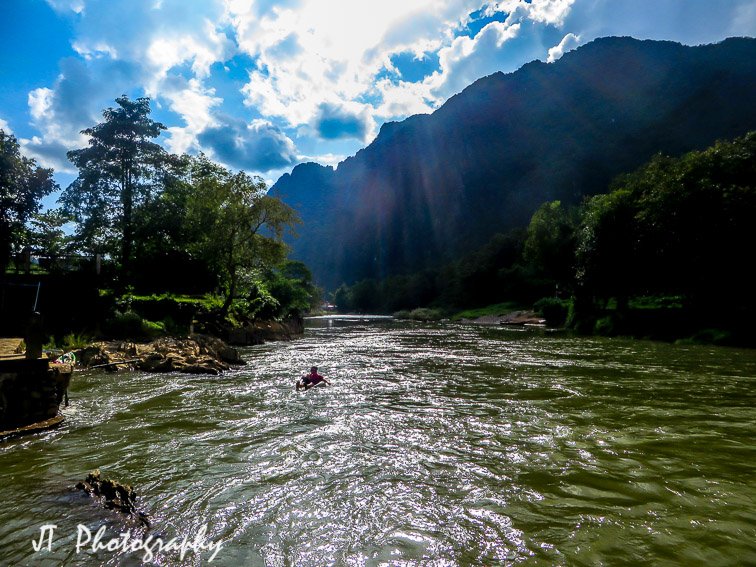 The scenery was amazing. Vang Vieng was actually one of the most beautiful towns I saw in my two and a half years abroad. Of course, the experience was heightened by the new perspective on the water. 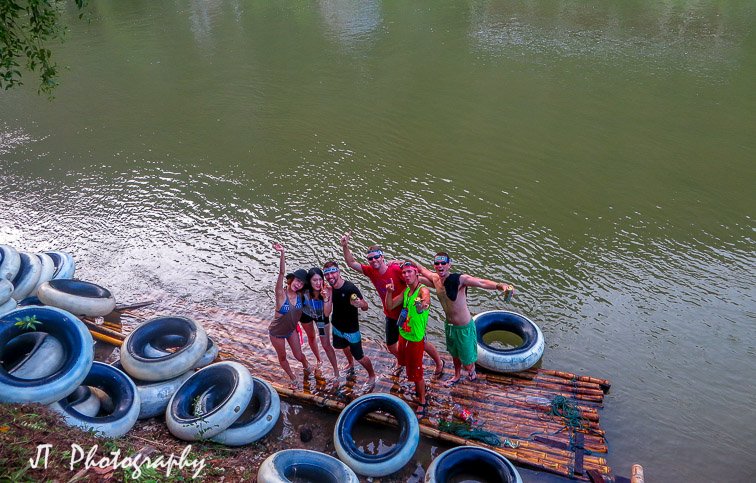 When it came time to dock for the first bar, representatives threw out long ropes to reel us in.  We felt very welcomed. 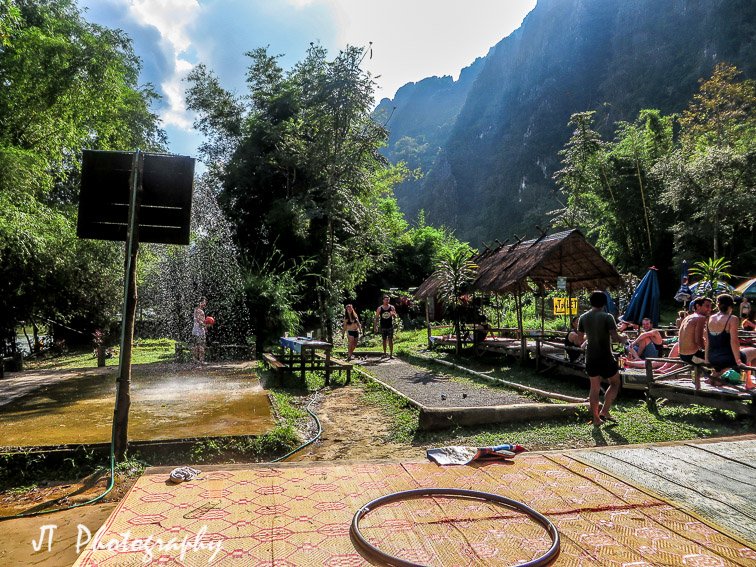 The bars themselves were amazing, each with their own style and games.   This one had water basketball and enough beer pong to satisfy any universities fraternity. 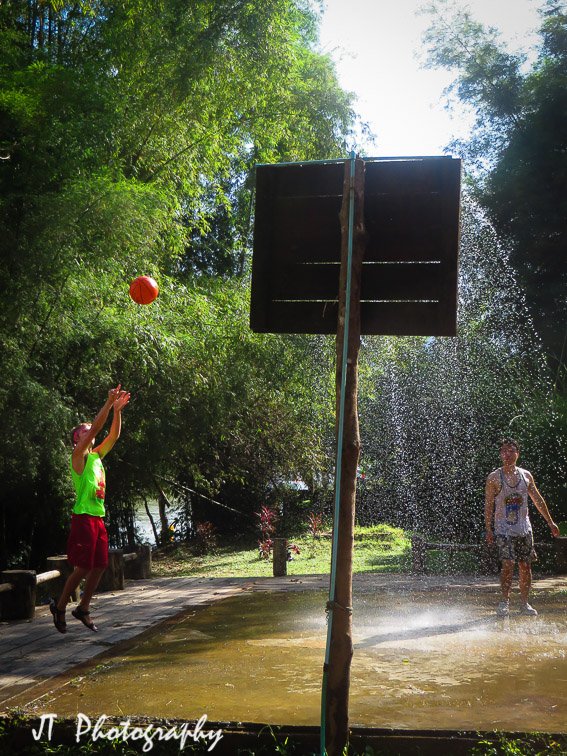 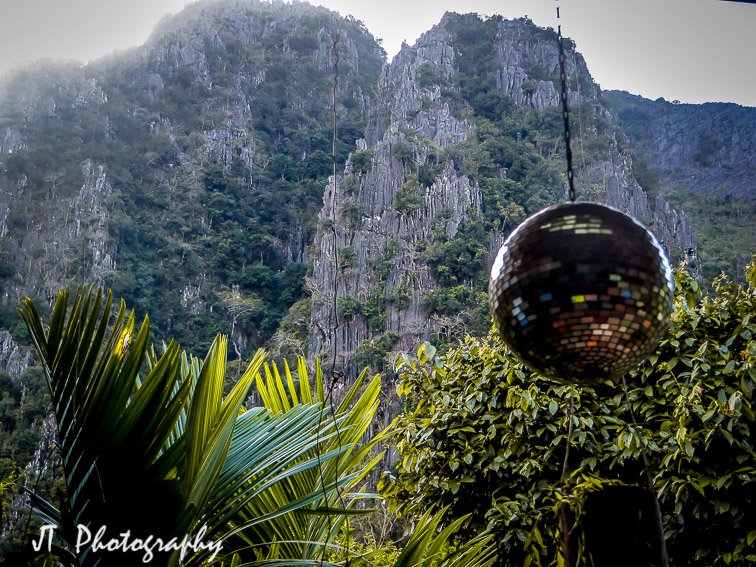 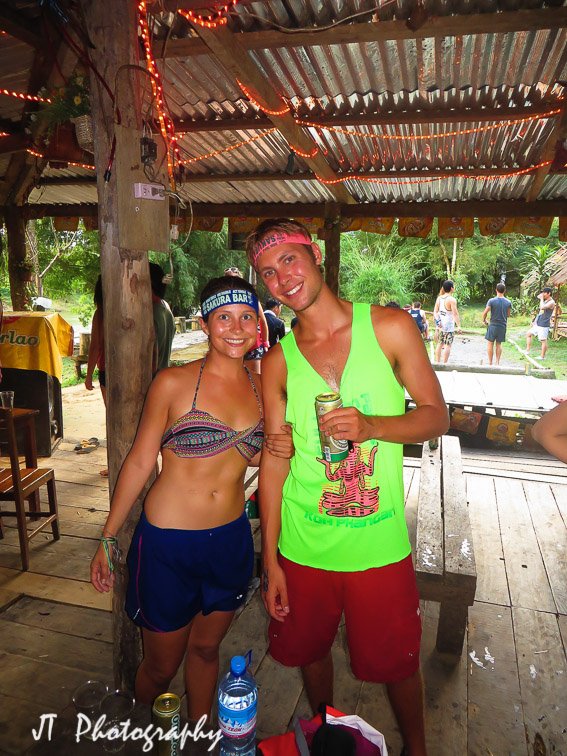 When we were ready, we hoped back in the tubes and continued down stream…with a road beer…I mean river beer. 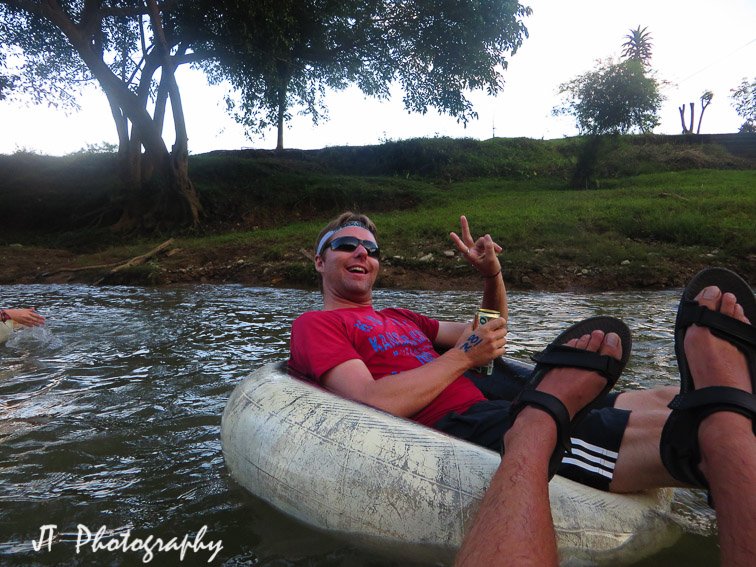 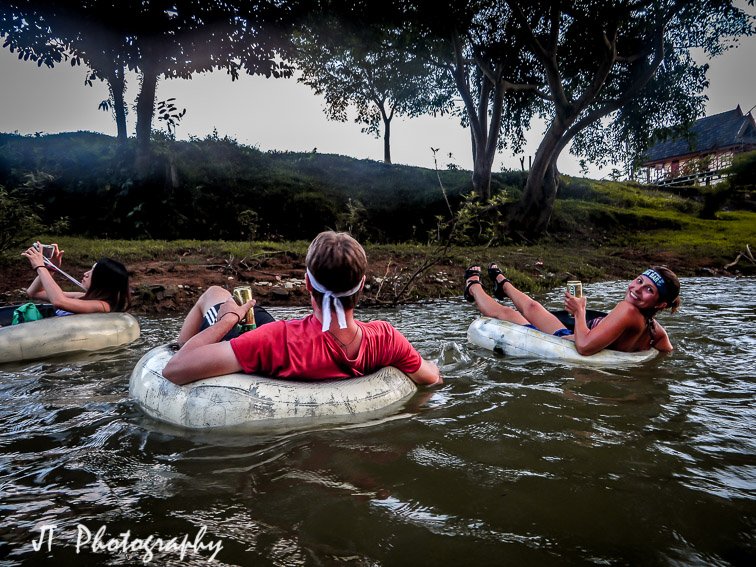 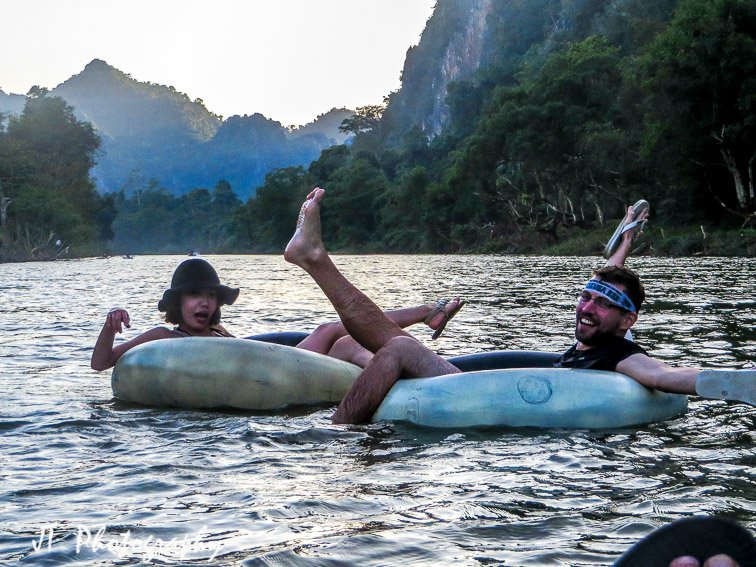 The journey continued like this for about an hour and a half of float time. You can drag it out at the bars as long as you want.

A surprising bonus was seeing the launch of a colorful hot air balloon.  It did not compare to the hot air balloons in Myanmar, but I will admit, it was the first time I got to view one from a tube. 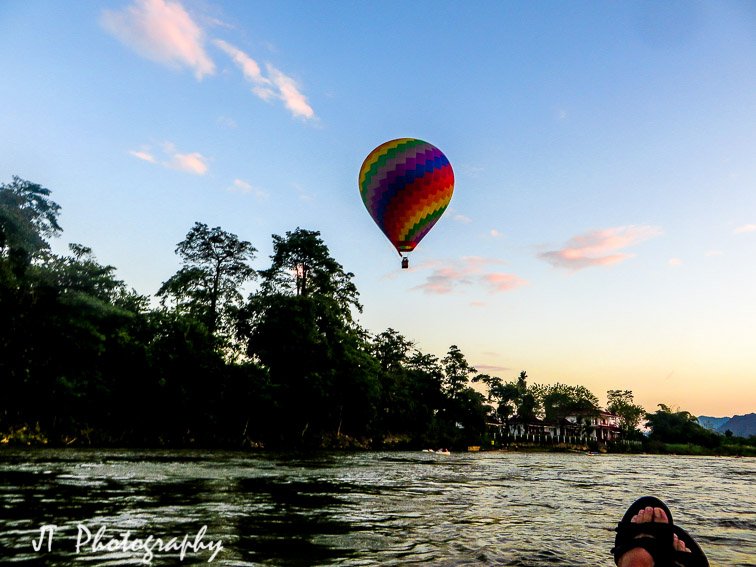 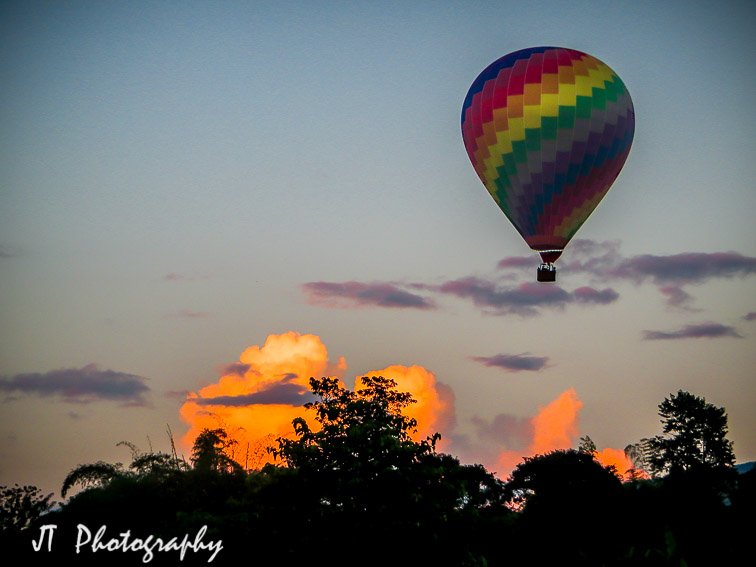 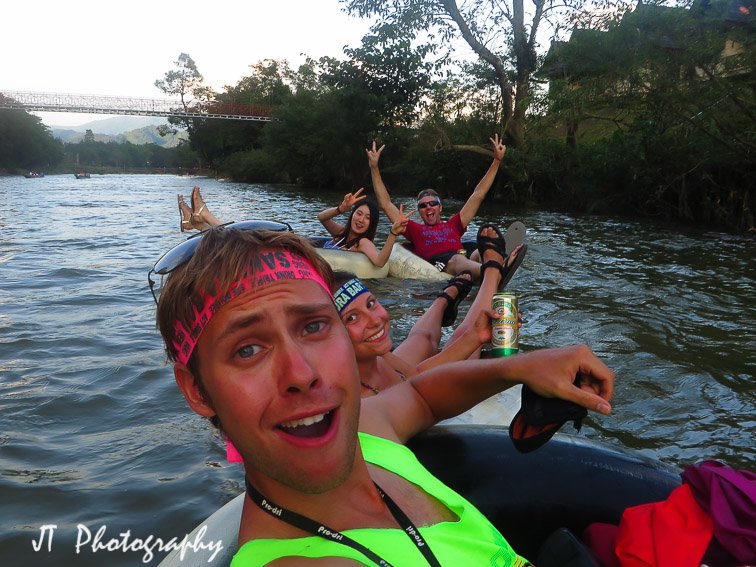 The extra time to just float and relax/jam out with the famous water proof speakers before the next stop really made the experience for me.

In the original set up, this could never have happened.  With a new bar every few feet and thousands of people on the river, I would not have been able to enjoy myself.

Therefore, I thank the Australian Government for their kind contribution to Laos and highly recommend you check this adventure out before it changes again, as many things do change in Asia.

Have you ever been tubing in Southeast Asia?