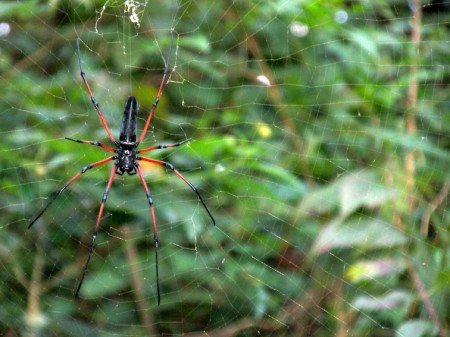 We must have driven past the entrance to Gupteshwor Mahadev Cave 3 to 4 times on the way back down from the World Peace Pagoda.

It was one of those obvious, yet not quite so obvious locations for a cave entrance.

The last place I would have imagined for it to be sitting was right in the middle of a local Nepalese shopping center, yet, there it was.

As soon as you passed by the stalls & tables filled with little miniature Buddha figurines, coins, knives, decorative spoons and other useless souvenirs that were obviously placed there for tourists passing through, you made it into the small park. 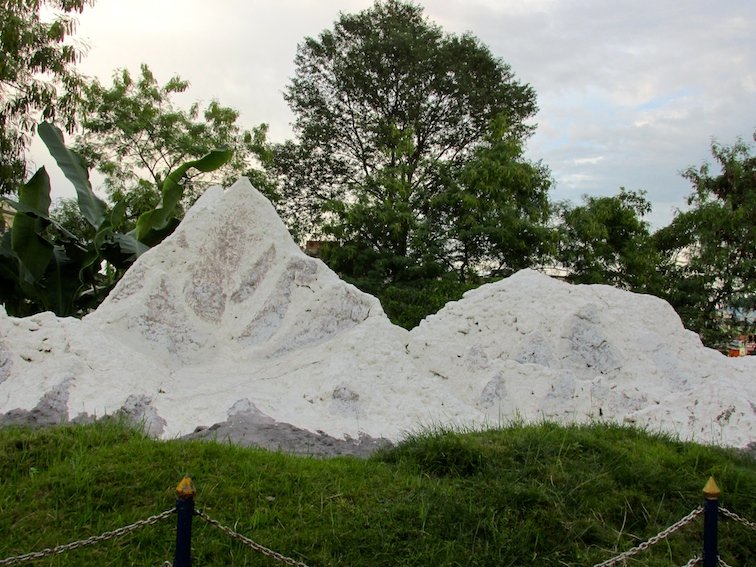 Just inside you could find a number of things including a replica of the major peaks in the Himalayan Mountains (including Mt. Everest), some odd-looking statues, a wishing pool and a few park benches where you could take a rest from the short walk and enjoy the sounds of birds chirping as well as the roar of the nearby underground waterfall. 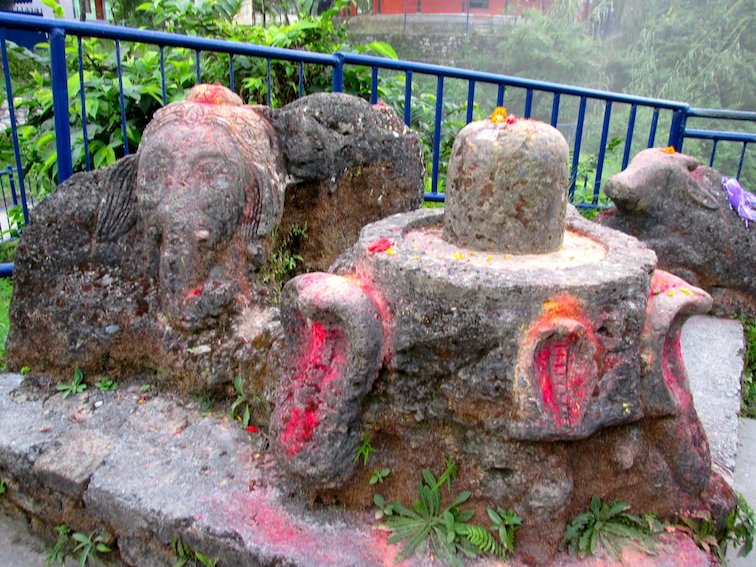 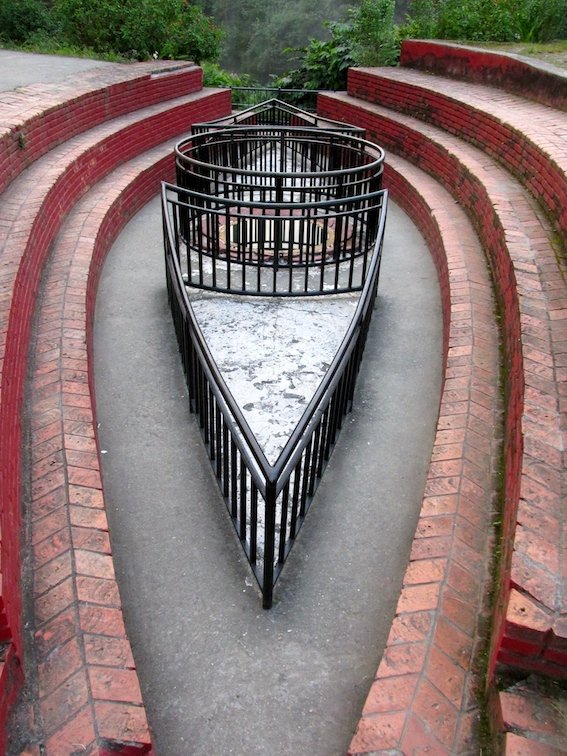 I would have to say that the most interesting thing I found leading up to the underground waterfall were the ground formations.  They reminded me a few of the caves I ventured into at the Skyline Caverns just outside of mainstream Virginia.  The water that had rushed through the previously jagged walls in both places and in return left smooth, round corners that were just as soft as the water itself.

Surrounding the smooth round corners were a variety of lush green vegetation which grew in abundance around the waterfall; living off of the mist alone.  As I let my eyes wonder with the rushing water down the waterfall and into the ground, I spent a little more time enjoying the serenity of the place then made my way to the actual cave entrance. 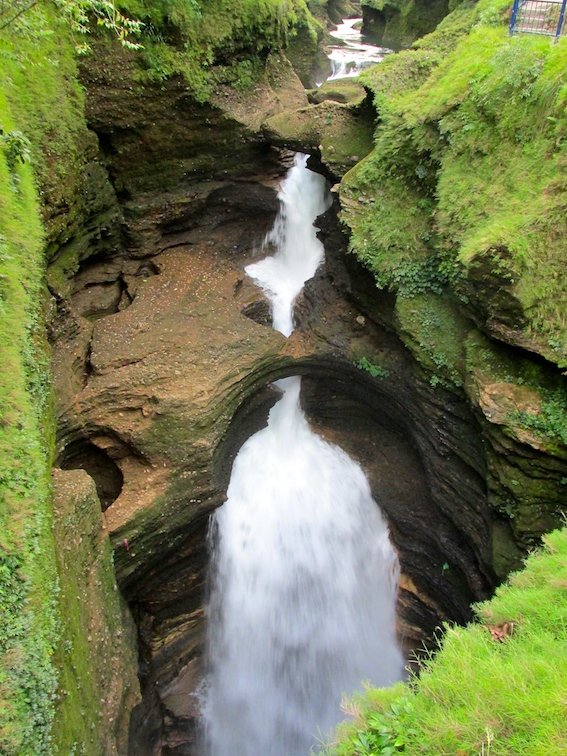 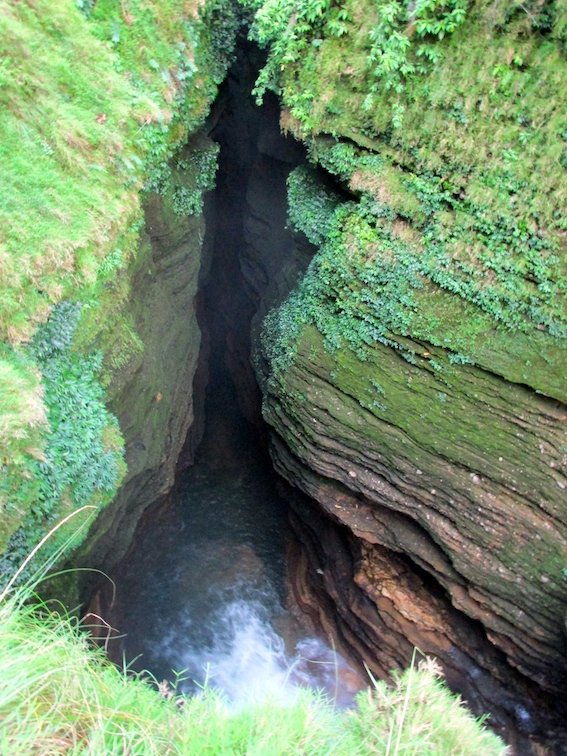 Exiting the park, crossing the road and walking through yet another set of souvenir shopping stalls, I found the main entrance to the underground cave.  It was pretty interesting too and, while still under construction, I saw the potential the entire place had.  The architecture was making up to be something beautiful.

A long set of spiral stairs made its way through a few small courtyards down into the ground where the finesse Nepalese architecture retreated to the cool enclosed walls of a humid cave. 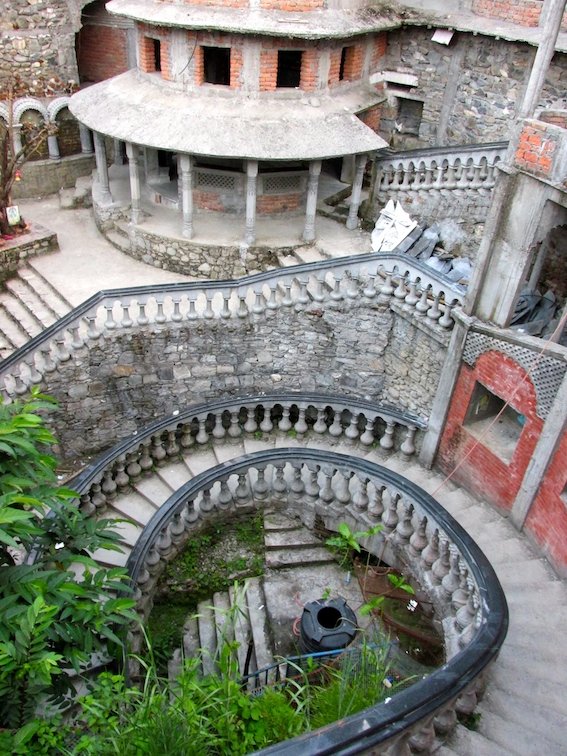 The walls were layered with stones to support the walkway and small lights lined the ceiling every 15-20 feet or so to provide lighting on the slippery walkway. 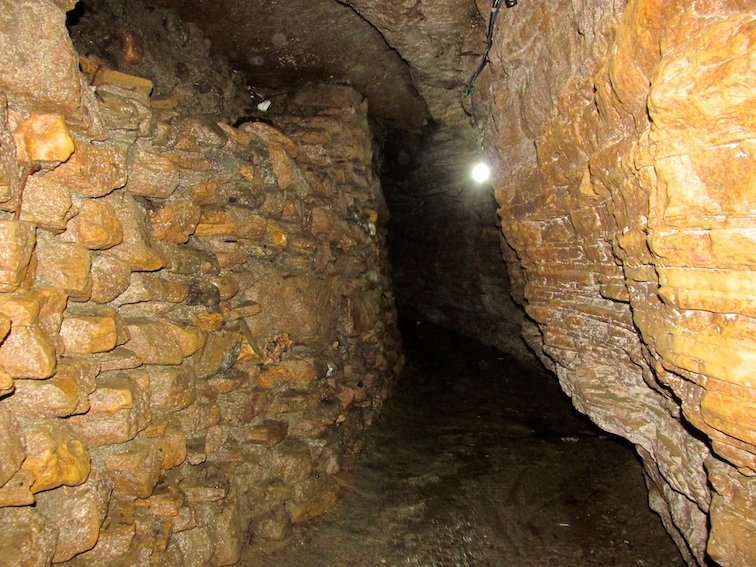 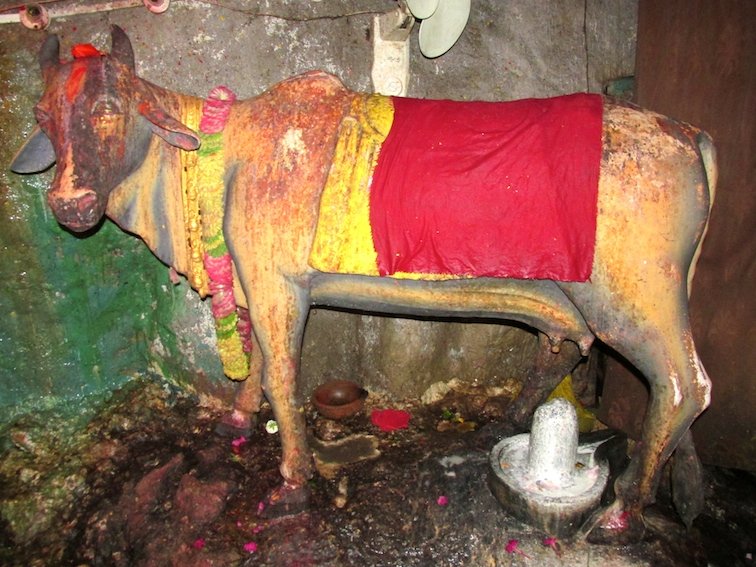 I’ve always found it interesting how certain cultures would go about celebrating their religions.  The photo of the cow above was just one of the many symbols the Nepalese have brought down into the cave.

There were several more statues representing the different parts of Hinduism but, out of respect, I didn’t take any pictures of them.  It was cool seeing the variations and subtle changes coming from Southeast Asia into Nepal.  Whereas the previous countries I have traveled through like Thailand, Laos & Vietnam practiced Buddhism, here it was the exact opposite as Hinduism was quite the prevalent religion. 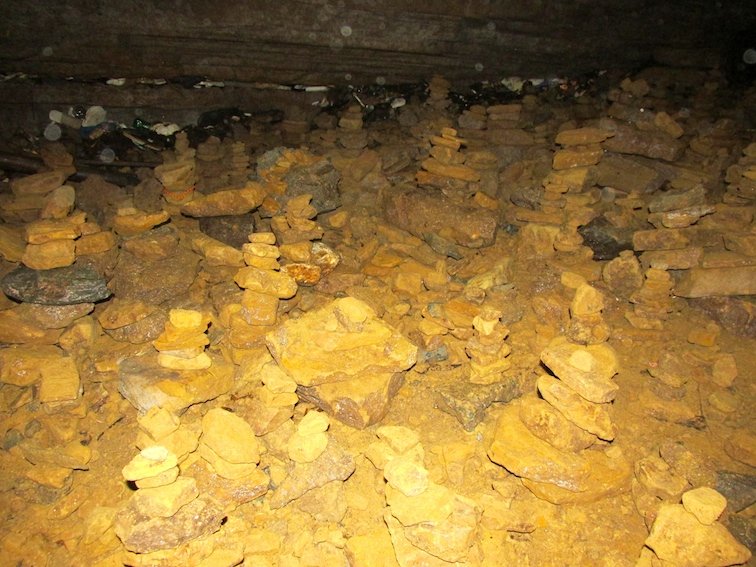 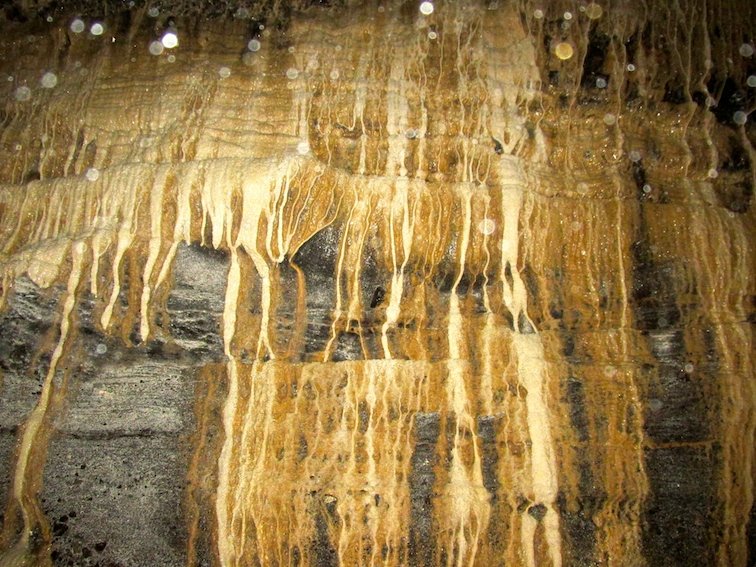 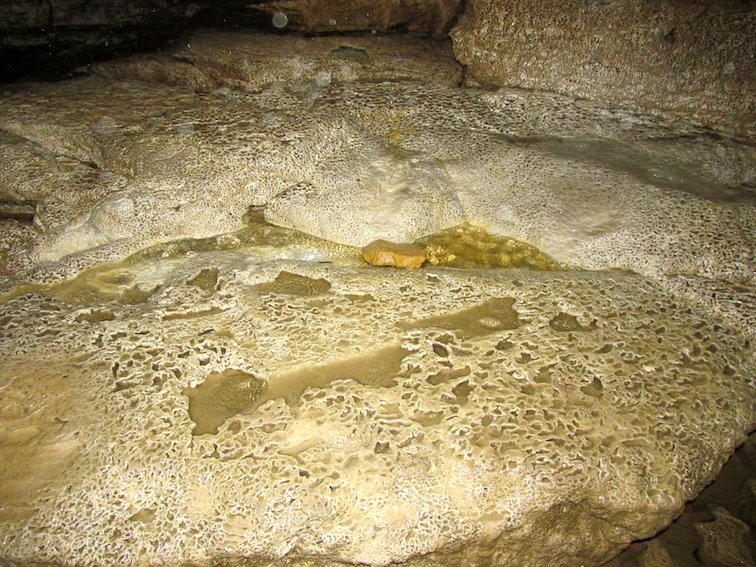 Alongside the religious figurines were also the natural rock formations the unique underground waterfall conditions provided.  While some formations took on a look of an overused candle where the wax was dripping down its side, others took on coral reef-like characteristics like that of which I found under the waters of Isla Bastimentos in Panama.

It’s so interesting how you can be on a totally different continent, on the other side of the world yet nature finds a way to relate no matter where you’re at! 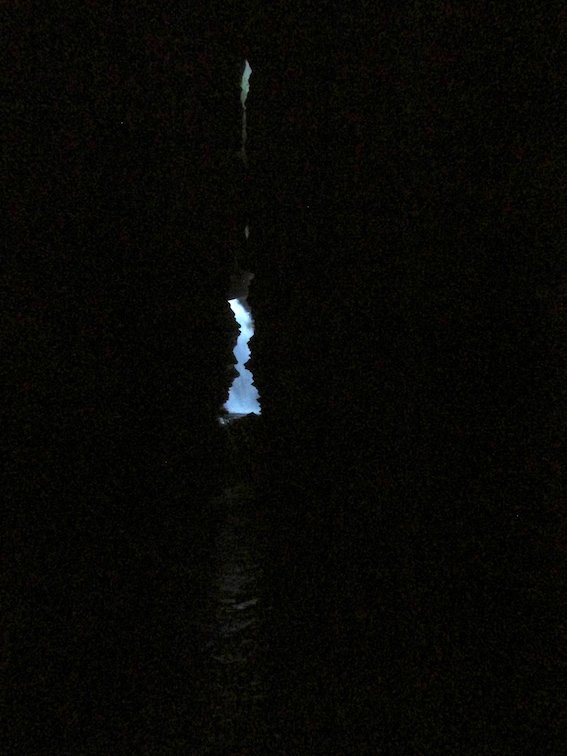 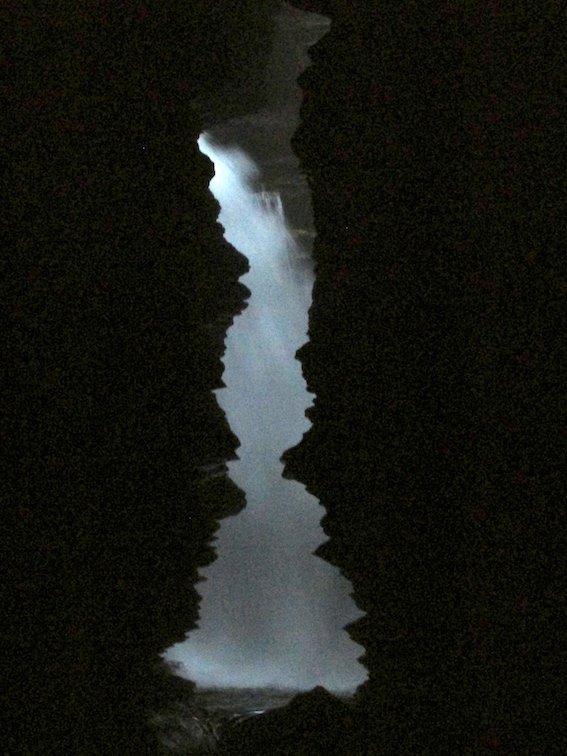 When Victor and I finally made it to the back of the cave, we discovered the bottom half of the waterfall that we’d seen when we first walked into the park.  It was still a good ways away, it wasn’t like we were right on top of it or anything, but you could still feel the strong mist that came off of it.

It was difficult taking any pictures without the camera getting soaking wet but with a few quick snaps, we managed to take something with us so that we could reflect back on this very neat and unique experience.  If I can leave you with one thing, it’s this: Nepal has some breathtaking natural features.

What’s the coolest underground experience you’ve had? Would you like to go underground in Nepal at Gupteshwor Mahadev Cave?