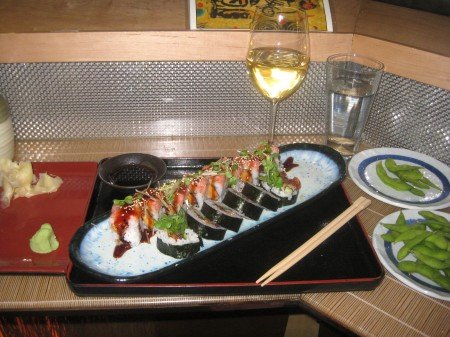 Finding affordable sushi in downtown Aspen Colorado is pretty much unheard of – unless you’ve had the pleasure of dining at Takah Sushi.

It all started with a semi-cimmerian evening of blues, pinks and clear skies opaqued against the coming starlit night.

The day had been comfortable but was quickly turning into a crisp dawn where the collection of colorful Christmas lights made a romantic walk down the city streets.  However, my attention was not brought to that of the surrounding lights, single women, and lack of snow but more so towards the underground dungeon of one of Aspen’s most authentic, innovative, and flourishing treasures: Takah!

As I receded down into the contently warm, yet bare staircase to the heart of the Takah Sushi establishment, I turned the corner and was quickly welcomed by not only a nice staff but also a contemporary design that would have left me shaking the architect’s hand in approval.

Taking a seat at the sushi bar as to have a more personal relationship with the individual who was making my hopefully favorable meal, I was introduced to Sous Chef Joe who greeted me with a smile as he prepared for what seemed to be a very busy night.

The best affordable sushi in Aspen

As the waitress provided me with water and took my order for a glass of King Estates Pinot Gris, a four year aged white wine bottled out of Oregon in the year 2007 that should definitely be featured in the Aspen Food & Wine Festival.  I took a look at the menu and quickly ordered by recommendation the “Me So Happy Roll” along with the “Salmon Skin Roll” which seemed to be quite a delight.

Watching Joe work his magic, he quickly presented me with a gorgeous display of the two rolls.  Anxious to dig in, I set my napkin on my lap, broke out the wooden bamboo chopsticks and took my first bite of which happened to be the Salmon Skin Roll.

Immediately my taste buds erupted with flavors!  Each ingredient flowed evenly throughout my mouth starting with the salmon itself, quickly followed by the bonito flakes, burdock root and kaiware sprouts that tasted as if it was sandwiched in between two smooth patties of Japanese white rice and wrapped in seaweed.

Surprised at the quality and freshness of each ingredient (after all we were in the middle of the Rocky Mountains…over 900 miles away from the Pacific Coast) I swallowed the delightful bite I had just encountered and readied myself for the next, seemingly superior roll.

Picking up my chopsticks once more, I balanced the work of art that we call sushi, examined the ingredients and allowed myself to enjoy the perfect combination of tempura sweet potato, spicy tuna and radish sprouts immersed in the sweet Japanese rice and eel sauce.  Thinking back on it now, the best way to explain it would be an “orgasm in my mouth” experience! 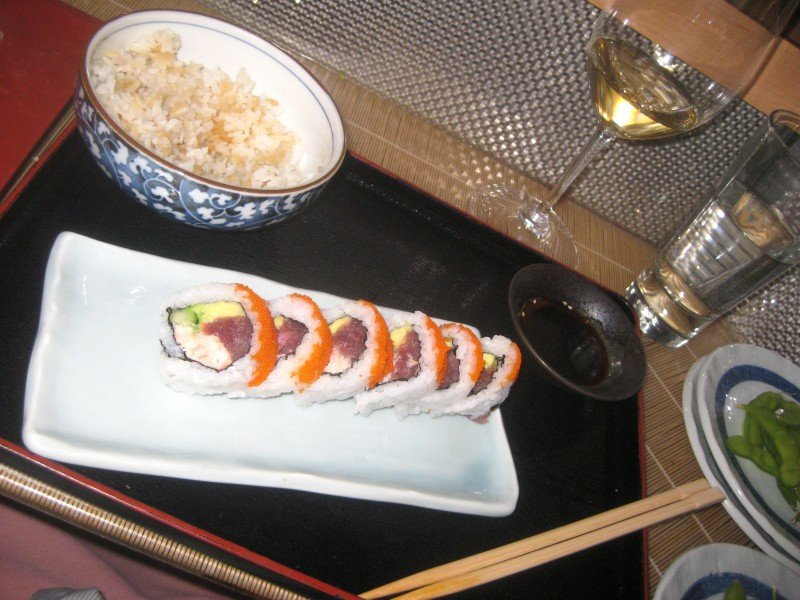 Finishing up my two rolls, I glanced through the menu once more to find another special delight: Takah’s Sushi Special Roll along with a side of Japanese rice.

Wrapped inside out with rice, a thin layer of seaweed, pieces of tuna, snow crab, avocado and cucumber topped with one of my personal favorite ingredients in sushi (masago), Takahs’ Special Roll was indeed very special with the type of ingredients it contained!  The roll was a subsidiary in the choice to the previous rolls but don’t let my decision persuade you as describing the sushi roll as mundane; I just like food that not only jumps at my taste buds but also takes them home and shows them a good time!

Finishing up once more, I was extremely full and decided to treat myself with something that had caught my attention earlier…the Uni Nigiri Sushi, better known to the world as Sea Urchin.  The last experience I had with sea urchin was when I had worked onboard the cruise ship based out of Hawaii.

Back then, my buddy Victor and I spoke with the locals on which ones were edible then proceeded to go diving so that we could try one out.  Sadly, we picked two that were still babies so there wasn’t a lot of meat in it and we hadn’t tasted much of the flavor to enjoy the experience, however, sitting at this sushi bar in Aspen, Colorado was a different story! 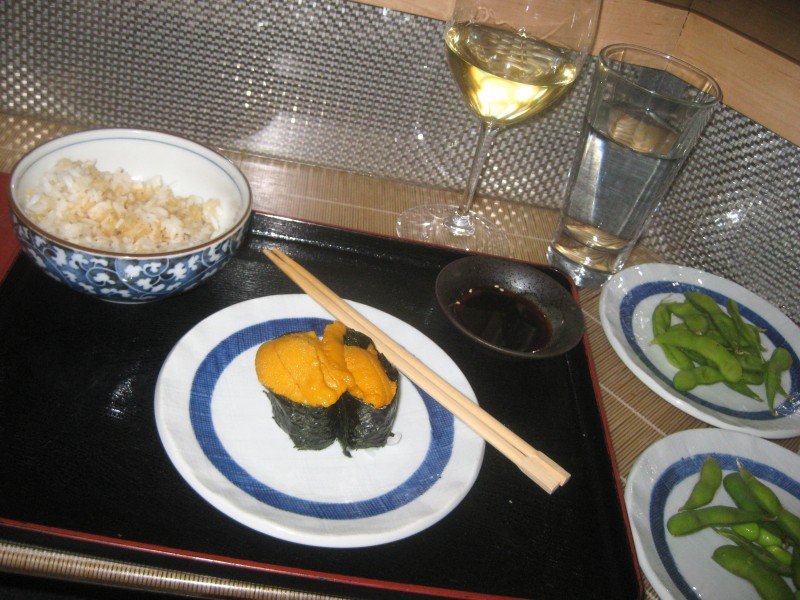 Placing two large pieces of Uni in front of me, Joe paused to take in my expression.  From the look on his face, you could tell that not many people ordered this dish and he seemed somewhat curious as to what my response would be.

Even the people sitting to the left AND right of me stopped in curiosity to see what I had ordered and they too had a similar look of puzzlement across their faces.  Putting everyone curiosity behind me, I opened my mind once more, separated the two pieces and proceeded to “live in the moment” even though I’ve heard many times that sea urchin takes an acquired taste.

Taking in the first bite, my senses began to set in motion with the wide variety of flavors.  It really amazed me at how much this small slice of urchin actually reminded me of the islands.  You could distinctively taste the ocean in every bite.  It was fishy, but not too fishy.  Although a bottom feeder, the flavor was intense with the marine life…but not too intense.

It wasn’t chewy by any means, but instead had a texture that reminded me of fish but was a bit smoother as it melted in my mouth.  All in all, I would give this rare delicacy a 9.5 out of 10 when rated in the seafood category and would have to say that you’ve GOT to try it out.

Finishing my meal, the waitress cleared my plate and Joe presented me with one last treat of pineapple (the perfect palate topper), I paid my bill, tipped Joe, and made my way up the stairs and out of the establishment.  If I could have one last word about this evening, I would have to say that Takah was one of the best meals I’ve had in Aspen since I moved here.  Not only because I’m a huge sushi fan, but merely because of the freshness, quality, and presentation of the food.