View of Wat Chom Si on the Summit of Mount Phousi 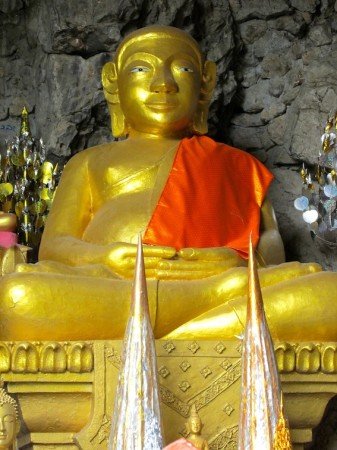 As I continued on my backpacking trip through Asia, I made my way through the congested streets of Bangkok and North to Laos where I witnessed a local Laos woman give live birth to a baby on my slow boat cruise.

Could you imagine the look on my face…I was utterly stunned, to say the least!

But with that eye-opening experience, I decided to take my time through Luang Prabang exploring the streets and eating the local cuisine, hanging out with the local monks and even had the opportunity to rent a scooter and drive up to Kuang Si Falls.

In between all of this, there was still time to explore more in depth the city I was staying in and, to my surprise, I discovered a very humble mountain which goes by the name of Mount Phousi.  At the top lies Wat Chom Si.

In between the peak of the mountain and her base were hundreds of make-shift steps leading you past Buddha statues of all sorts as well as small buildings where the monks of Mount Phousi were housed.  The statues were similar to those I found up Doi Suthep Mountain in Thailand but, as with every country, there was a twist for it to adapt to the local culture.

The older red brick steps seemed to mold into the mountain as we climbed higher and higher.  100 steps.  150 steps.  200 steps…how much farther could it go?  The higher we climbed the more my legs began to ache.

Luckily my friend & I were distracted enough by the surrounding scenery that the thought of aching legs and short breaths were thrown all the way to the back of our minds. 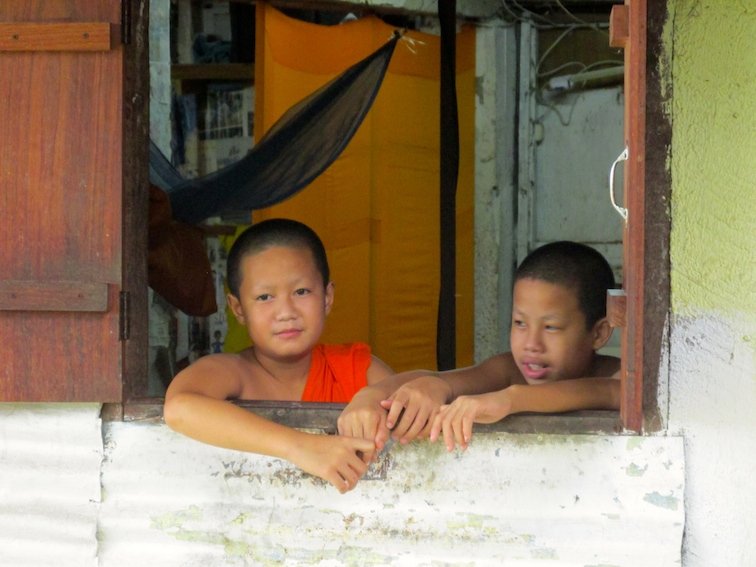 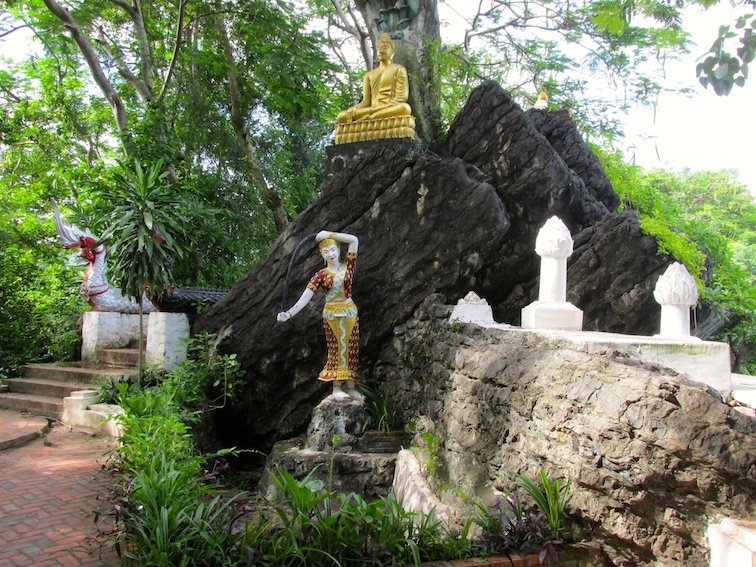 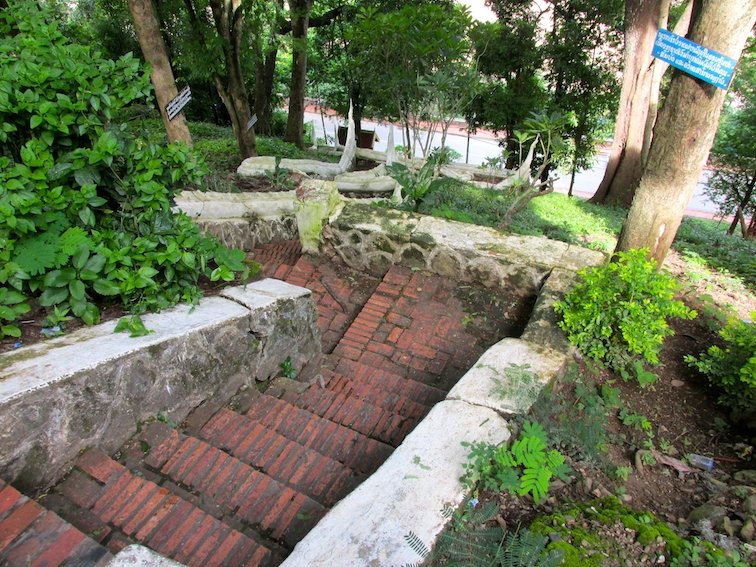 Once we made it to the top of the first section of stairs, the surrounding architecture of Mount Phousi really began to reveal itself.  Young monks in training were sitting inside their home chatting with each other while looking at us as we climbed and took pictures.

Miniature statues of Buddha began to appear here and there while we walked around listening to the small finches chirping amongst themselves in the trees.  Continuing the climb up, there was a sign representing an “Imprint of Buddha’s Foot” so of course we had wondered what that was. 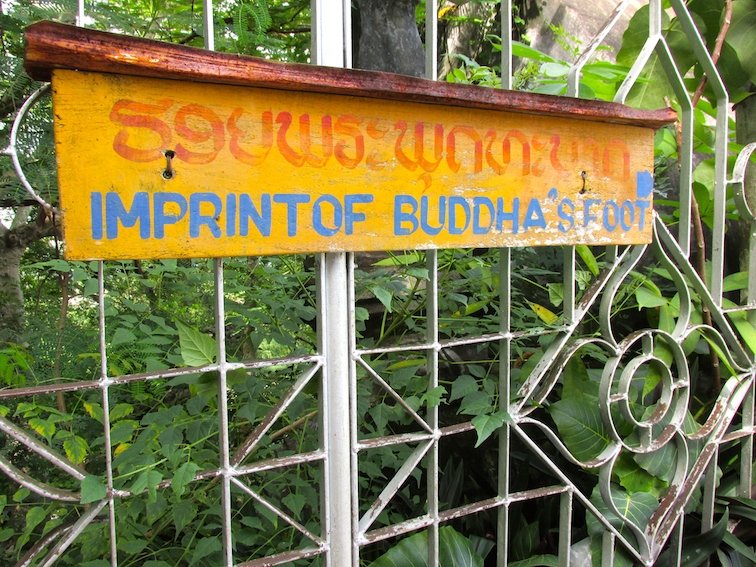 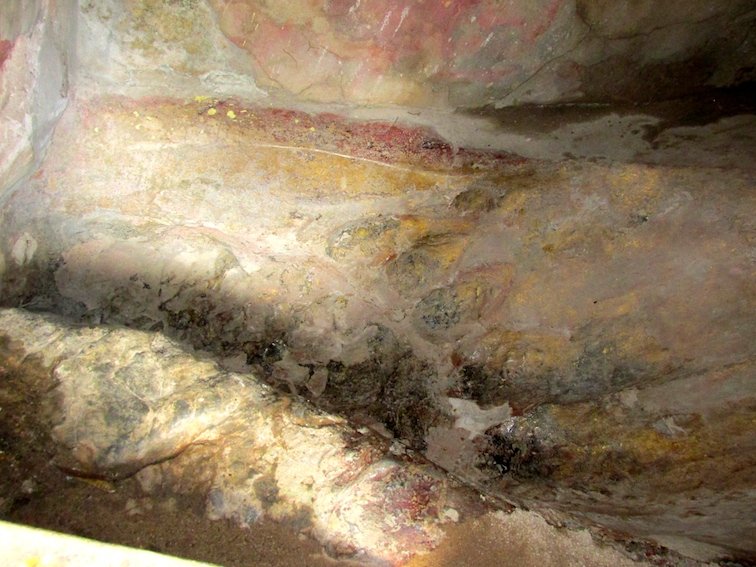 The footprint was located in a large crack inside the mountain and spanned for about 4-5 feet.  It was rather impressive and, being it was Buddha’s foot, the monks had built a small temple around it just big enough to stick your head inside.

Taking my head out of the hole and looking around, I couldn’t help but be fascinated at the view of Luang Prabang.  You could see clearly where the two rivers combined into one and where all the local men were fishing out of their boats.

After taking in the view it turned out, farther up on the mountain there was a second Buddhas foot but slightly smaller (about the size of a real foot). 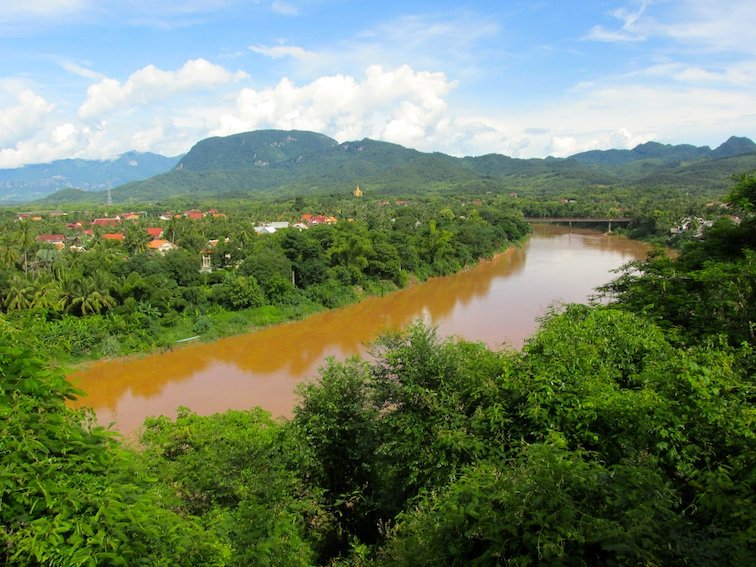 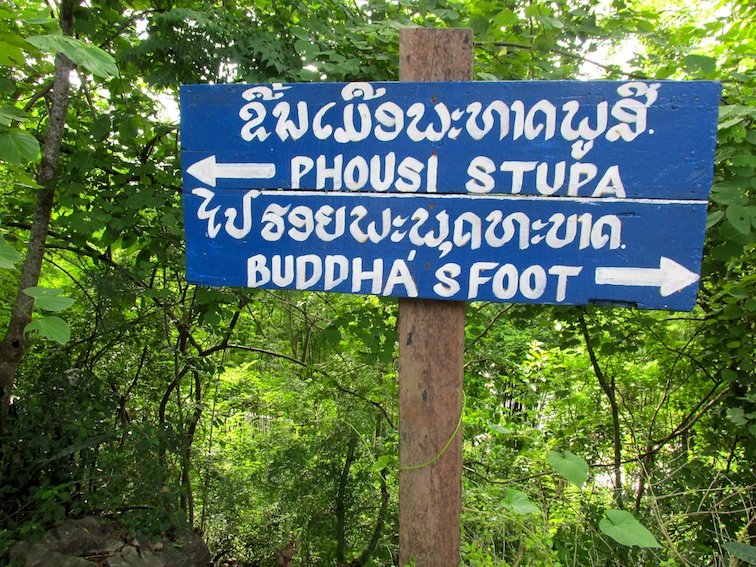 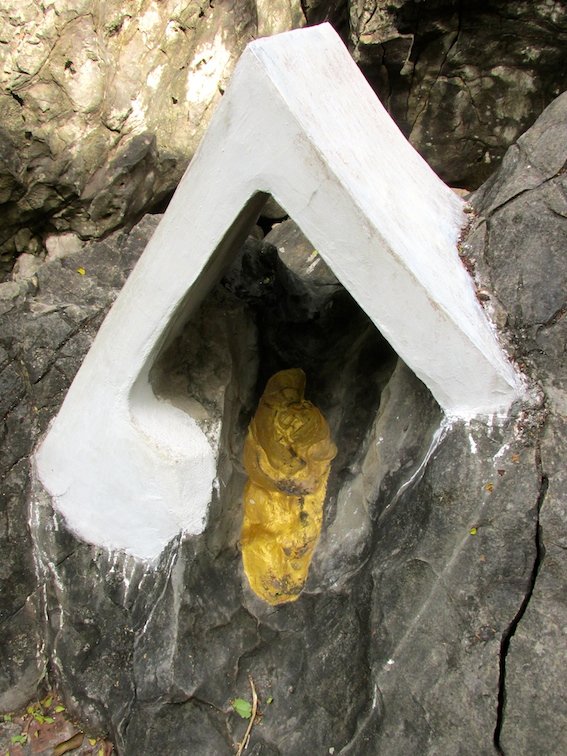 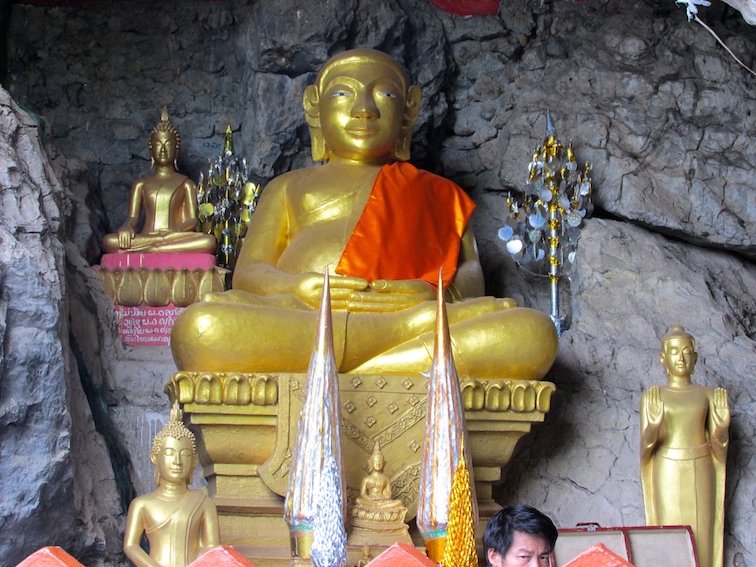 This one had a very simple structure around it creating a makeshift arrow pointing up while the footprint itself was painted gold.  Just next to the footprint was a moderately sized courtyard, about 10 foot by 20 foot, and off to the side were several more golden painted statues. 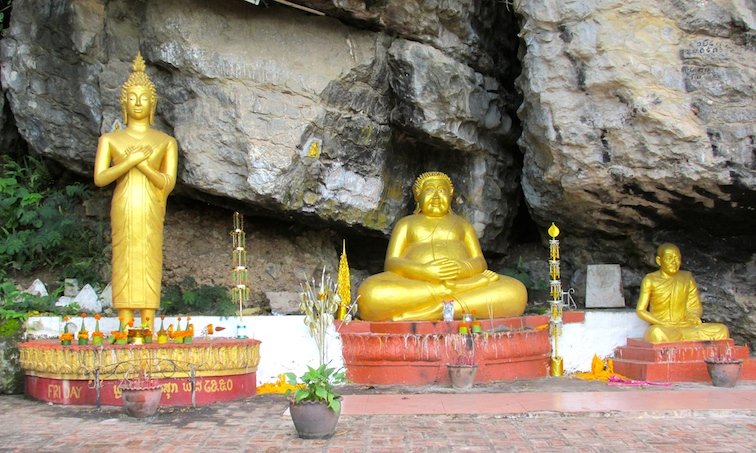 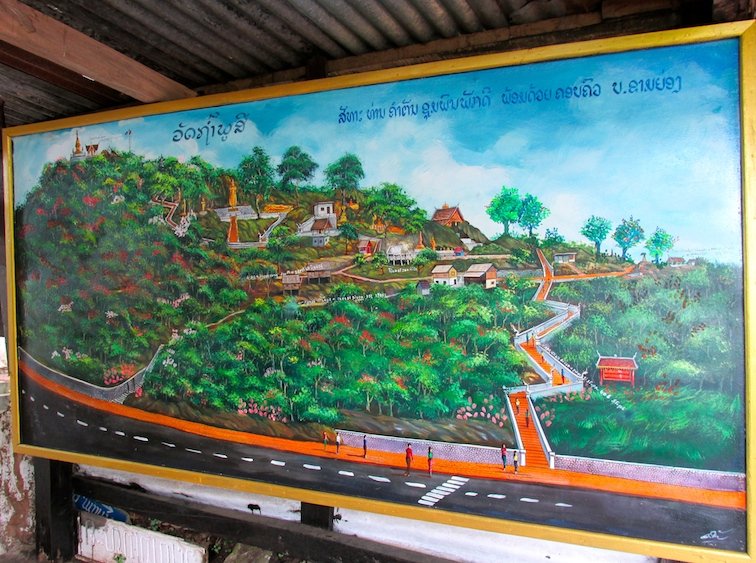 A few local men and women were praising to the God on the way up so we stepped back to give them their space.  But noticing a small billboard on the other end next to a ticket booth, I purchased our tickets for 20,000 kip each ($2.50 usd) and we continued our hike up to Wat Chom Si. 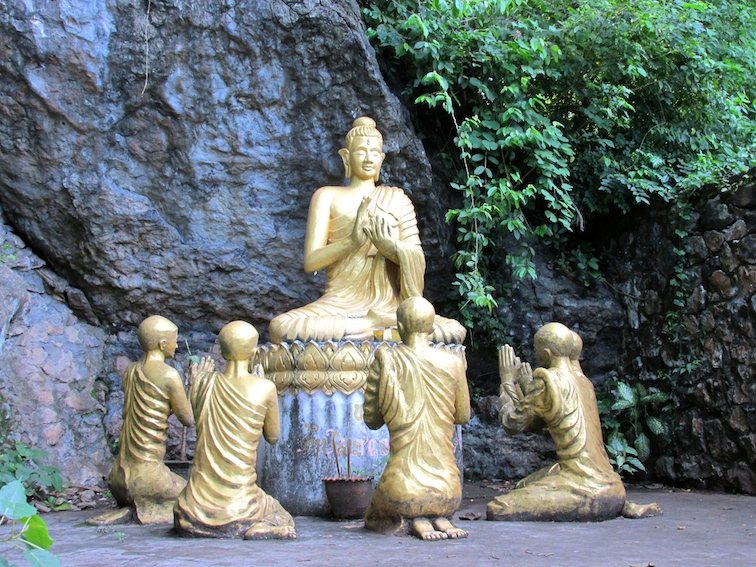 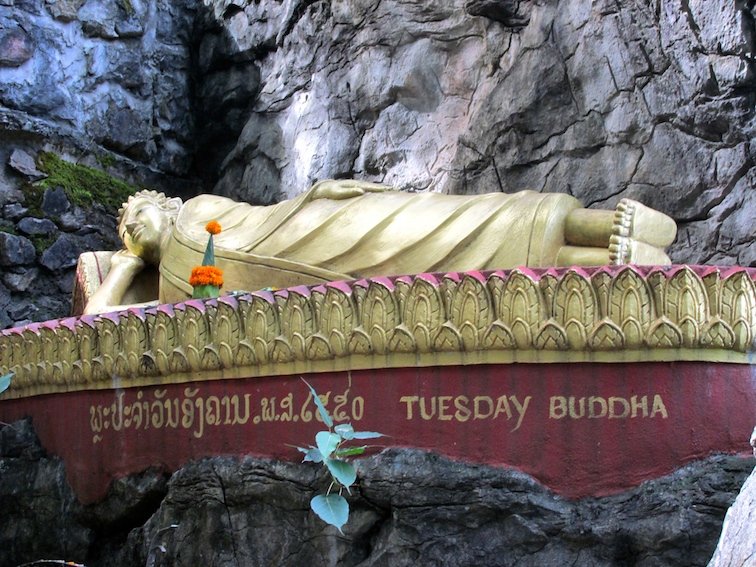 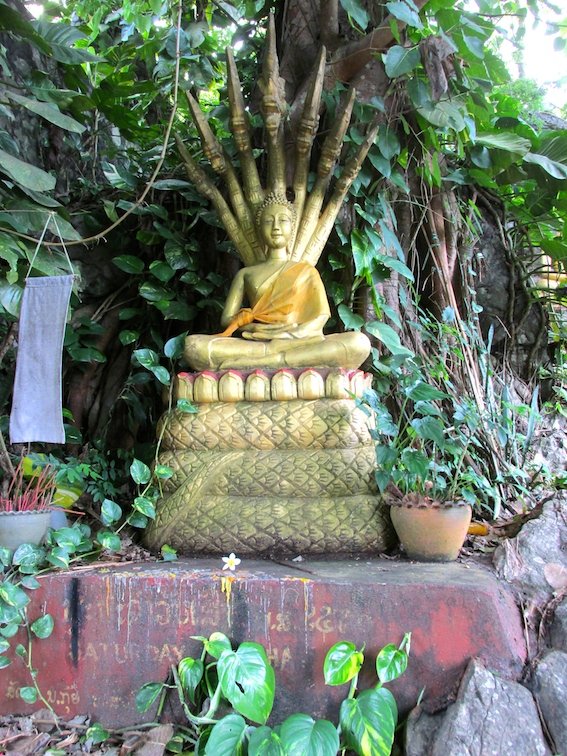 The statues varied greatly from one to another.  They represented many things such as teaching, prosperity, health, peace and even the days of the week just to say a few. 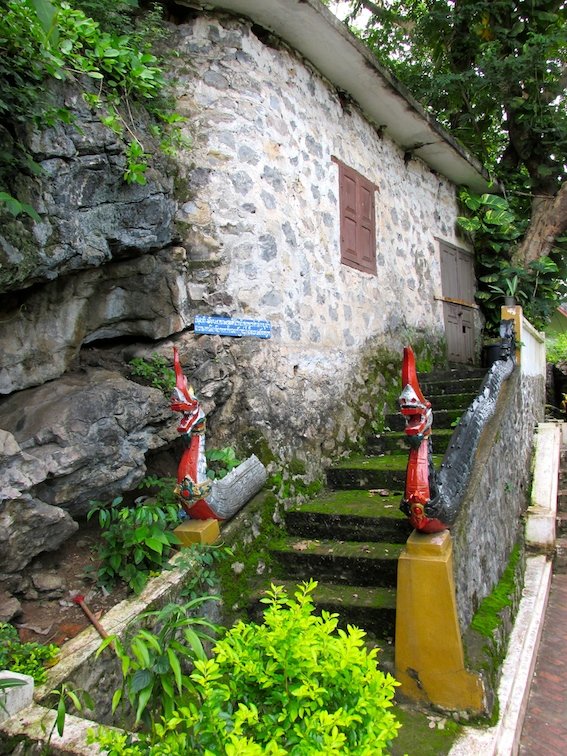 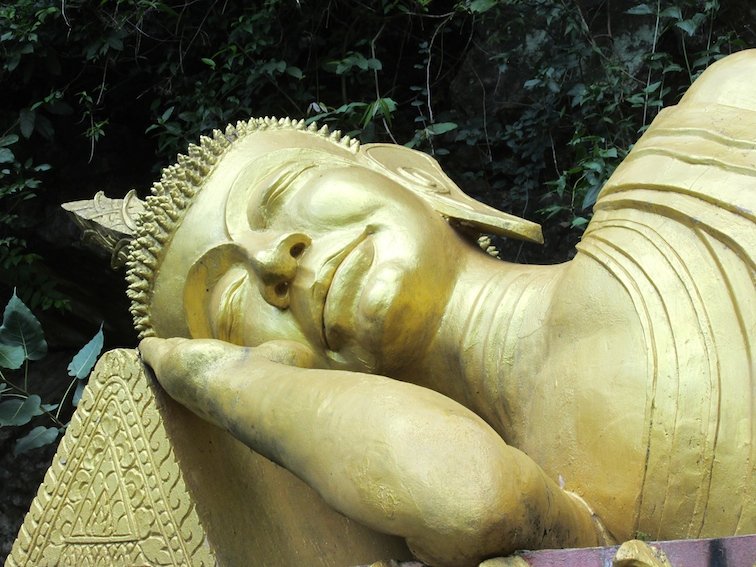 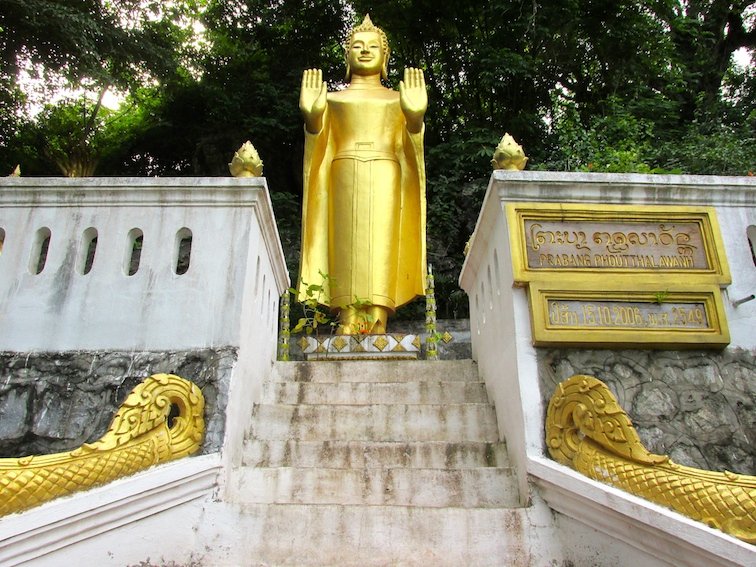 In all, the entire thing was beautiful.  I couldn’t help but wonder how in the world the monks carried all of these statues this far up the mountain.  Who knew how much they would’ve weighed! 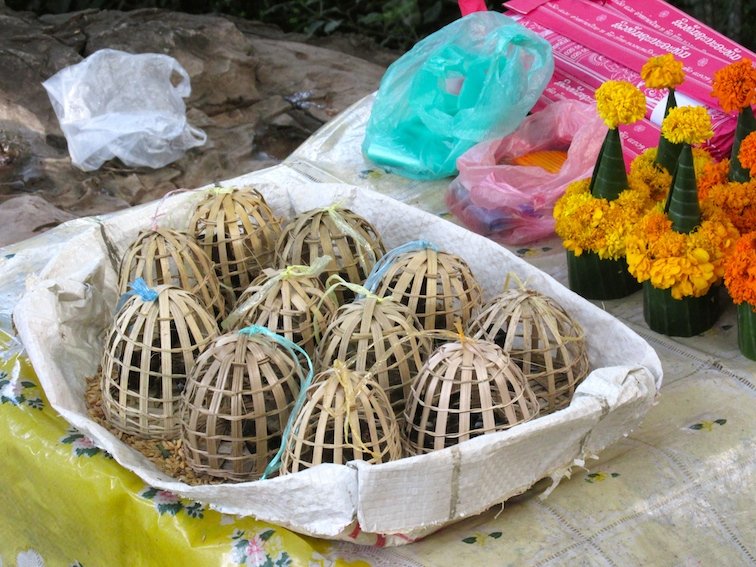 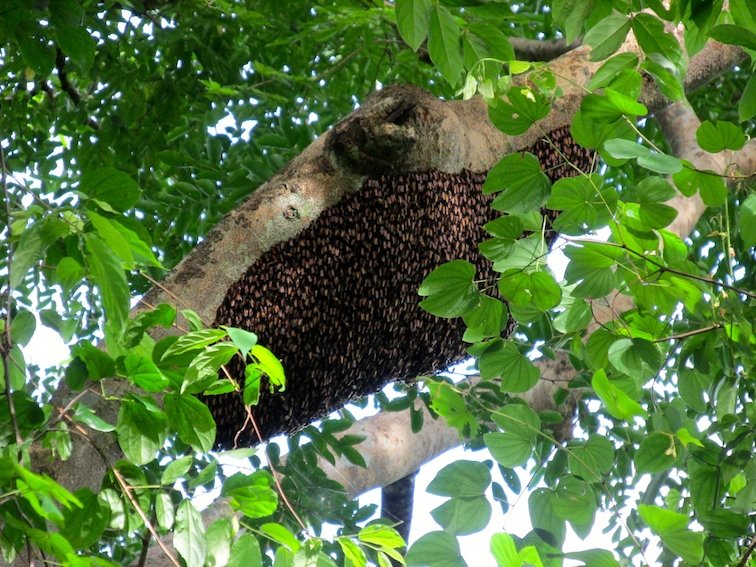 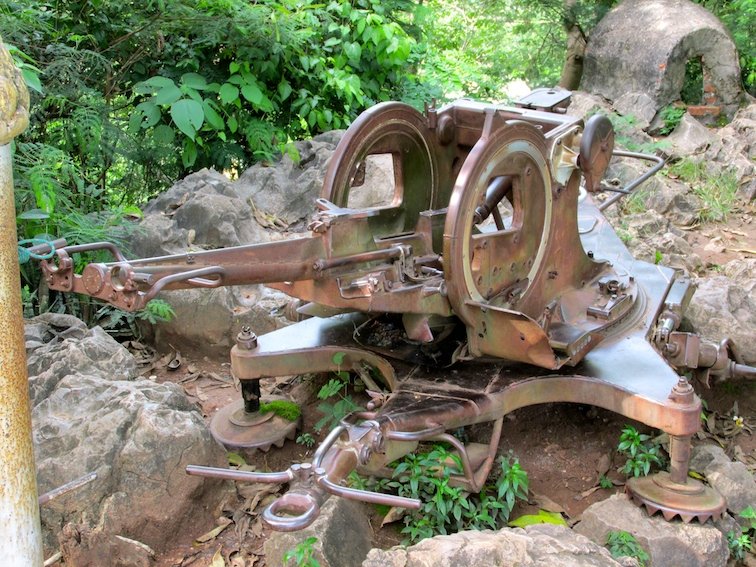 Going up the final set of stairs, we passed by quite a few interesting things.  The one I wasn’t quite fond of was the small birds trapped inside miniature wicker cages.  It’s said that if you purchase one of these birds, you hike to the top of the mountain and let it loose.  In return, you will be given good fortune by the Buddha.

It’s a good thought and all, but the problem is that the local women here will set up traps all over the mountain to capture them.  This creates a vicious cycle where the birds are no longer really free as most of the finches get caught 2, 3, 4 or 5 times…sometimes more.  It’s quite stressful on the animals and, although I would’ve loved to have purchased all of them to ensure their freedom, it would’ve been a futile effort.

If you go to visit this site, be sure to NOT purchase these birds.  The last thing we want to do is encourage something unhealthy for the animals and, overall, it’s just not right to do. 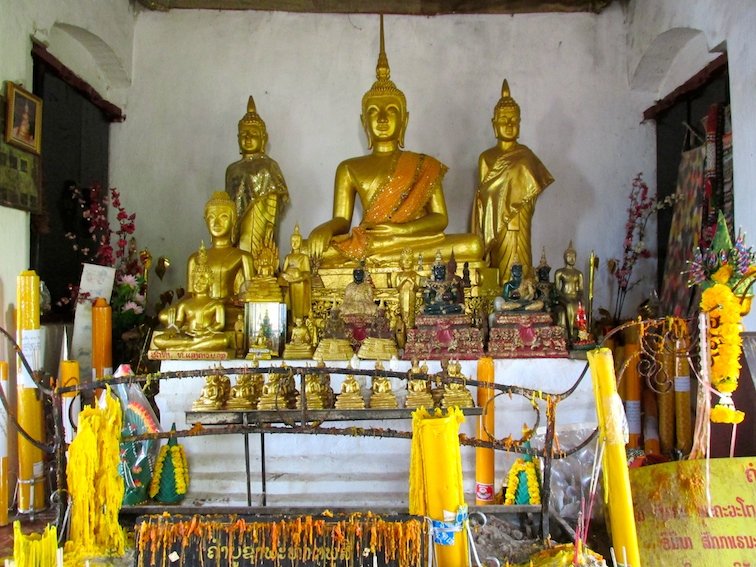 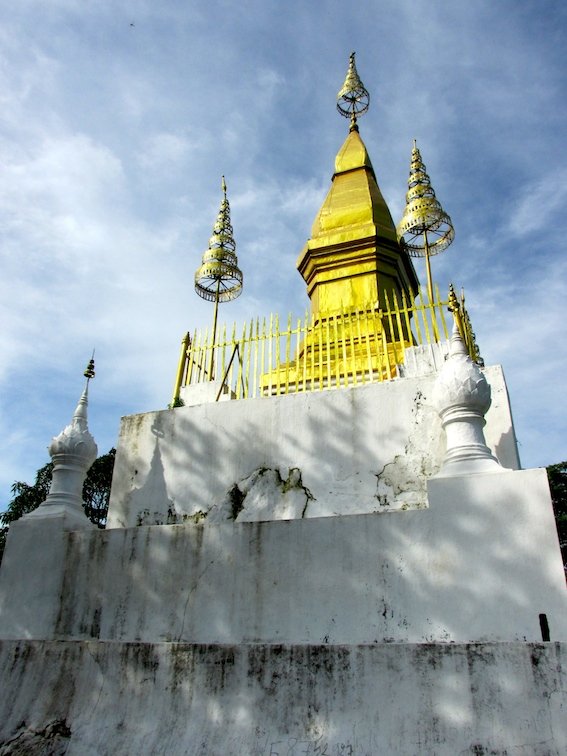 When we finally reached the tip of Mount Phousi, the ancient Wat Chom Si sat at the peak reflecting against the days sun.  Inside the Wat sat 3 large Buddhas surrounded by smaller statues, flags, candles, flowers & other ceremonial type garments.

There was even a cat who just chilled at the front entrance in a relaxed yet upright sitting posture protecting the Buddha. 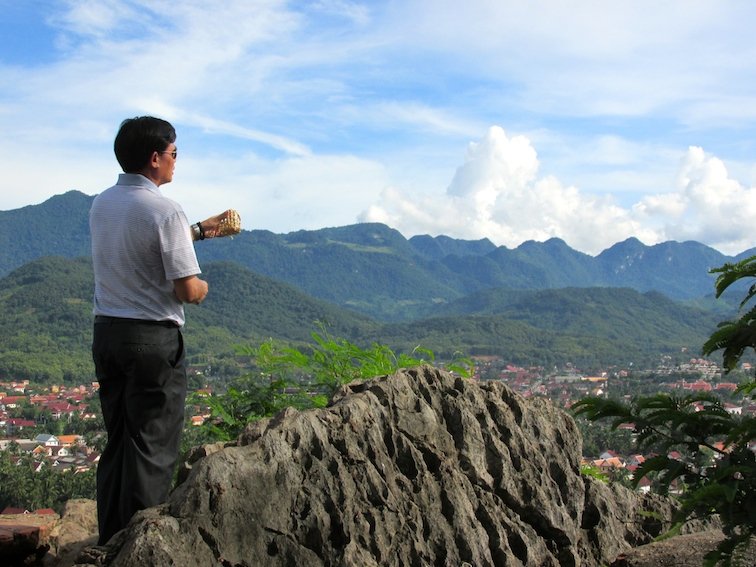 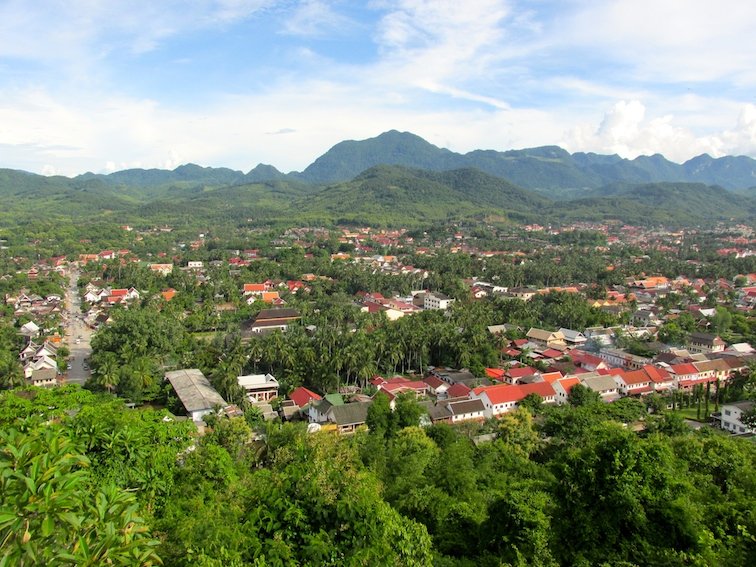 At the very peak of the mountain was not only the temple, but a small courtyard with rocks jetting out to the side.  There was a man who actually purchased one of the finches in the cage farther below and released it to fly free.  It was a satisfying yet saddening sight.

But if you’re looking for the best view of Luang Prabang, the river and the rolling mountains this is the place to go.  It’s relieving to see all of the green trees incorporated into the city. 😉

What’s the most beautiful city you’ve ever been to?