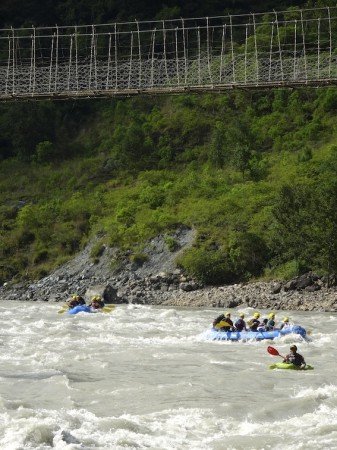 The raft fell down the face of the wave at a speed barely recognizable by that of the natural forces on the river.  But, as soon as we were in the trough, our guide bellowed a loud “FORWARD” and within a split second all six paddles hit the water.

We were climbing back up the wall, splitting the lip with a large explosion of water blasting everywhere as if the front of our raft was a grenade being launched into a dense wet forest.

We had hit two more waves like this and, before we knew it, the wave train had come to an end and we were throwing our paddles up for a high five closely followed by whooping & hollering that could have been heard for a mile downriver.  We had successfully made it through the first rapid of the day.

The group and I were on day 2 of our 3-day rafting trip down the Kali Gandaki River somewhere in the central parts of Nepal, just south of the Himalayas.  Our gracious host, Paddle Nepal, had agreed to take me along with a handful of other travelers passing through on an adventure through the backcountry that we would not soon forget.

And forget, we did not.

This was no easy backcountry ride.  No, these days were filled with intense paddling through class III & IV+ rapids that sent some people hurdling into the air some 15 feet and ending with a fluffy landing into the cool, welcoming water.  And regardless of how intense the moment may have felt, we all knew that we were in good hands as it was obvious that safety was our guides number one priority. 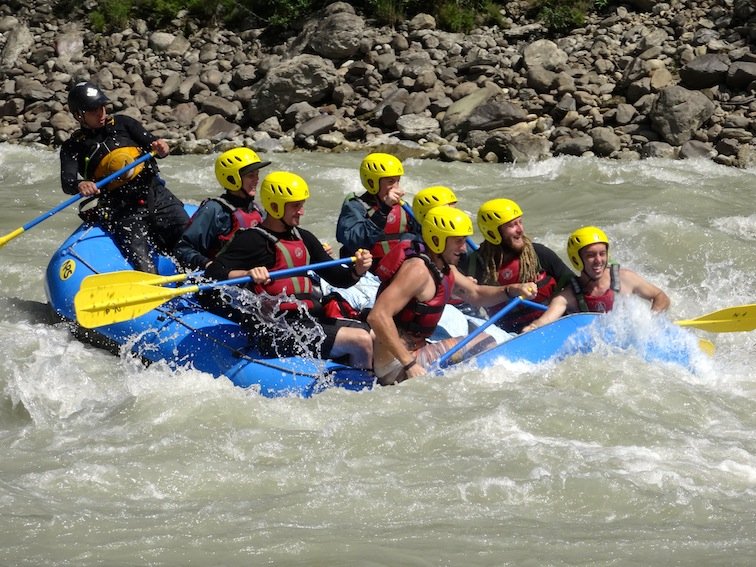 One thing that’s pretty much universally agreed on in the rafting world is to NEVER let go of your paddle.  Reason being: because you’ll effectively be “up the creek, without a paddle”.  Except this creek was a river…filled with high-class rapids.

But luckily on this trip, we didn’t have that problem.

Day 1 began early as we loaded into the 1970’s Nepalese style hippie van.  All the gear was loaded on top in preparation for the next 3 days on the river.  Food, housing, kayaks, rafts…everything you could imagine was going to be floating down the river with us travelers and our nifty guides.

After about a 3 hours drive to the put-in point and one or two goat drop-off points later, we finally arrived at Maldunga.  You could feel everyone getting even more stoked for the river and, after filling our bellies with a delightful lunch, we jumped in the raft and began our journey. 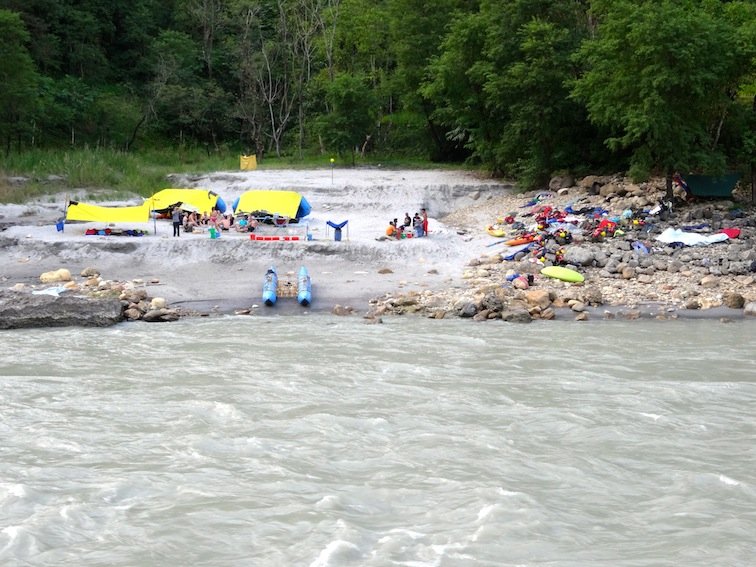 Taking the next couple of hours blasting through wave train after wave train, our first campsite was made on a cozy little beach just off the side of the river.  Our housing: a make shift tent with the raft up on its side and a couple of tarps laid out to keep out the sand & rain.  The setup was simple but very effective.

Dinners along the entire trip were surprisingly good and plentiful; usually filling us with spaghetti or another type of pasta along with side dishes.  They never seemed to run low on food and there was plenty for everyone to go around 2, even 3 times.

As we rolled over into day 2, we started the day by going through Good Morning Rapid.  The splash of cool water in our face was just as effective as a shower in waking everyone up.  The group’s muscles ached slightly from the previous days paddling but, nonetheless, we pushed on through an even more exciting series of rapids than what we had the day before.

At night we set up camp once more with another healthy dose of food.  It was a fun night as we were able to start a fire and have a few drinks since some of the local kids brought down baskets of beer and snacks for us to purchase.

The 3rd day was sadly our last day.  We started off with a few rapids after having breakfast then went down a lengthy stretch of flat wire.  It was a nice end to the journey and being that the water was flat, whoever wanted to attempt to kayak was able to do so then; a nice and unexpected touch to the trip in my opinion as well as a great teaser to take one of their kayaking classes.

In the end, all of the newfound friendships had definitely sunken in and everyone felt like family.  It was sad to see everyone go their separate ways but it was certain we would never trade the experience for anything in the world!

Take-Out: Birmi (5 hours back to Pokhara)

I highly recommend choosing Paddle Nepal for any adventurous outdoor/recreational activities in Nepal.  Their professionalism, work integrity & overall customer satisfaction attitude capped off with the strict “safety first” guidelines rates them as my go to adventure company while traveling through Nepal!