Witchcraft at the Pagan Festival in Ocala, Florida 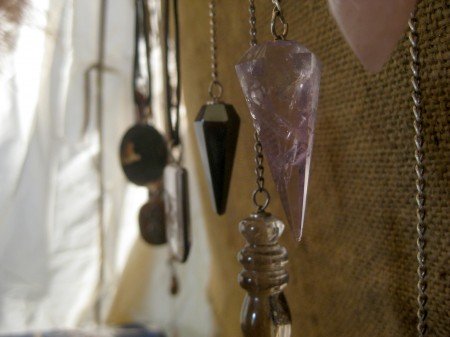 I woke early at the Pagan Festival in Ocala, FL to the sound of air whispering through the tall and overly abundant oak trees.

There was one lying to the left of my tent and although it was awkwardly on its side it still grew to a beautiful marvel of earth’s creation.

Of all the places I’ve been to all around the world, I still enjoy spending my time in nature.

It was still a bit chilly outside when the warm and welcoming sun rose from its nights’ rest but with the combination of a refreshing breeze and a good night’s rest, I really felt my spirits become livened for the days’ events.  I was starting to get more accustomed to the actual festival itself along with the people and I was quite excited to have a full day to explore everything on site.  That and I also got to use my tent again – the last time I went camping was when I decided to hike the Ocala National Forest for a few days, but that’s a story for another day.

Stepping out of my tent and stretching, I got ready and then walked over to the area where they were serving breakfast.  For just $5 USD I received a plate full of eggs, bacon, oatmeal, and toast.  A very simple breakfast but extremely satisfying.  Everything was cooked over an open griddle and cooked with heart…just the way I like it.

The Pagan Festival in Ocala, Florida 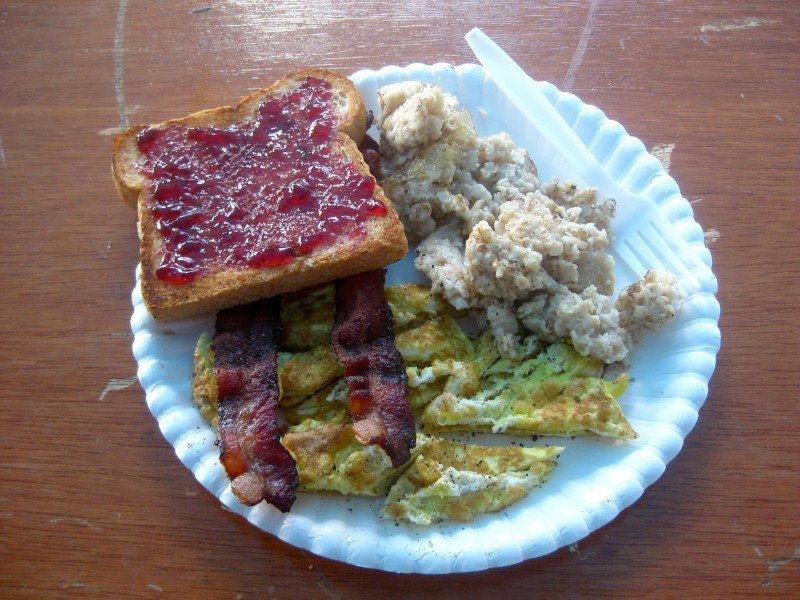 Once I was finished eating breakfast, I made my way back to the tent to write down a few key notes in my journal so that I could remember certain things for a later date.  My buddy Allen, who was out and about way before I was, had come over and informed me that there was a Native Style Flute Playing workshop to be held in about 15 minutes.

Hurriedly writing down my notes, I grabbed my chair and we attended the class which was phenomenal. 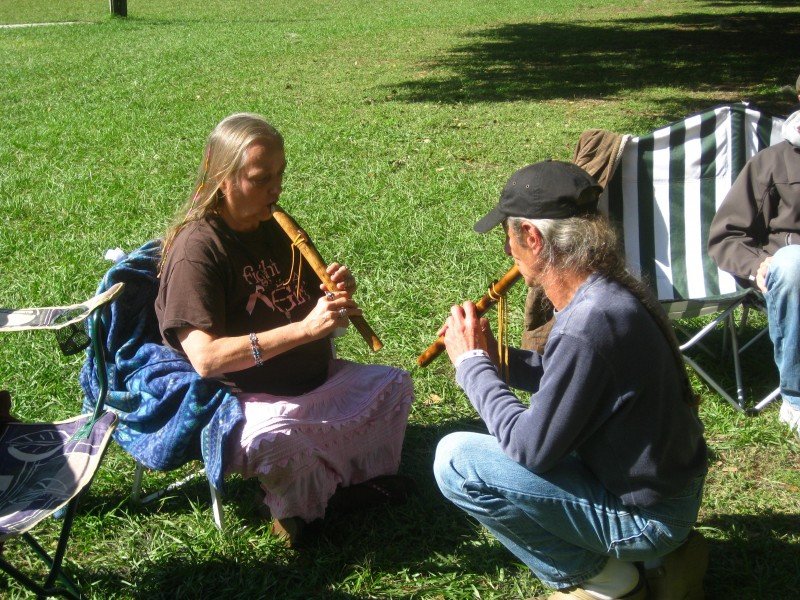 Before this festival, I had no idea I was so musically inclined.  I learned to play the drums, a Native American style flute, and my Ukelele much better than I initially thought I ever could have.  Mark, our instructor, guided all of us through the basics of how to play and handle our flutes.

Moving along very comfortably, he was a great teacher and easily fixed any flaws that may have occurred while practicing.  Towards the end of the class, we were able to play our own individual songs with the rest of the group and he even gave us permission to take a flute back to camp to practice with…how original!  To express this much trust, even in a small group nowadays truly baffled me but it was genuinely nice to see. 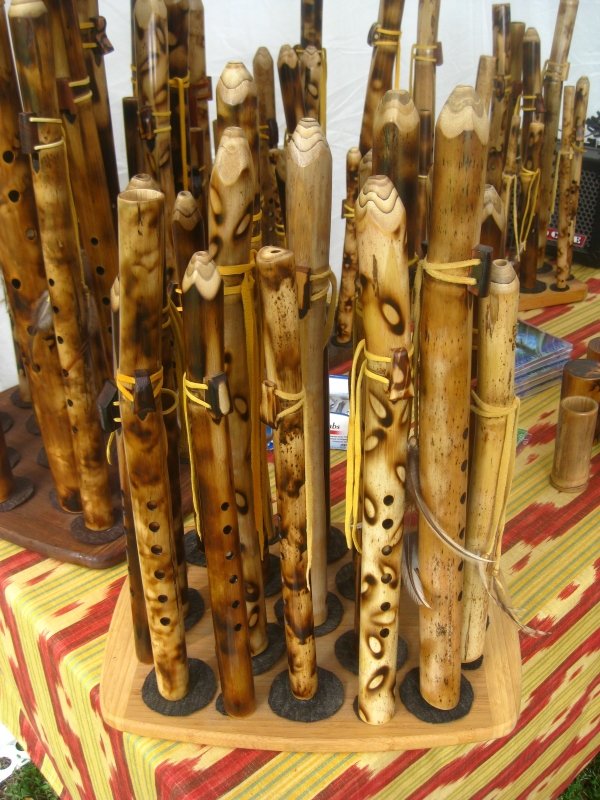 Once class was declared over, I took my chair and jacket back to camp and went back to where all the vendors were set up.  Although only a few at this particular festival, I found them all very interesting.

Lines up from left to right in a fashionable order, the first had an assortment of crystals, herbs, and other ornaments like the Pendulum’s below.  They even carried mini witch hats that you could purchase and clip onto your hair; rather cute if I say so myself.

The second was where Mark had his stand set up with a great assortment of Native American flutes, all hand-made and truly unique.  They had all different notes to them varying from A to E and each one had its own unique sound and feel to it.  It was obvious that he had put a lot of his time and care into making these mini masterpieces.  I was very tempted to get one myself but I was saving my money for the mead that was available later that day.

Going down to the final stand that had caught my attention right before the end of the line where the food was stood a small tent that carried witch’s broomsticks, hats, and other gadgets like the staff you see above with a spider carefully crafted onto it.  All of the vendors carried truly unique things that you wouldn’t find anywhere else and to be honest with you I thought all of these things were rather wicked!

Deciding to take another walk around all of the campsites, I was able to talk to quite a few more people but the one campsite that left an indentation in my memory most was the one under the “Exotic Braw Tree”…I know, I know…just let me explain.

When I was walking by this one campsite, I happened to run into a braw.  Odd right?  Who just walks by and a bra hits you in the face?  Only at a Pagan Festival!  When I looked up there had to be at least 15-20 bras and even a pair of panties hanging from this magnificent oak tree in an assortment of colors and styles that not even Victoria’s Secrets could compare to!

Highly intrigued, my attention was then brought to three cackling ladies sitting under it which of whom I assumed were the culprits of this magnificent scheme.  Introducing myself, and after a while of friendly chatter, I asked what was going on here with this tree covered in braw’s and panties.  They informed me that this was “the Exotic Braw Tree of which only blooms with braw’s (and apparently a pair of panties) in the summer while there are three witches under it”. 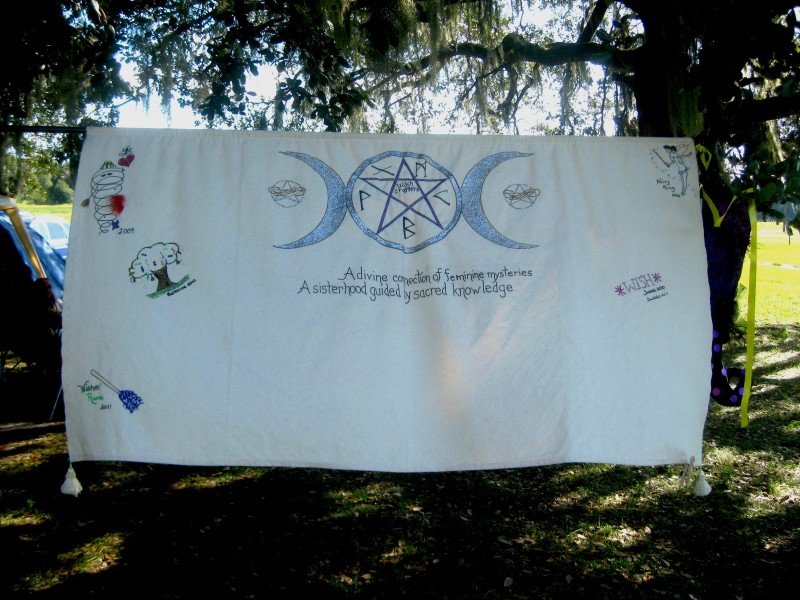 After walking around and socializing a bit more, I pulled out my schedule to see what was occurring for the rest of the day, and to my surprise, I noticed a “Mead that Magical Brew” class starting really soon.  I had heard various things about this mead stuff so it took my attention quickly and then I noticed that it was occurring right under the downed Oaktree by my tent…that was a good enough sign for me!

Walking into the workshop a little late, I introduced myself, declared that I was over 21, and opened up my chair to sit down and learn.  My buddy Allen came up right behind me to join the class just as they were passing around the first sample of mead and boy was it delicious!

Come to find out, being a craft home-brewer myself, I realized that making mead was pretty much the same process as making beer.  The only difference was the amount of time you let it sit and that you didn’t have to carbonize it.  How convenient!  We tasted three different flavors of mead: one was spicy, another was flavored with cherry and pomegranate and the third carried a really bold citrus flavor to it.

Although all were good to the taste, I preferred the spicy flavored one the most as it was very smooth but all three had that delicious honey aftertaste to it.  At the end of the class, Papa John handed out a sheet of instruction on everything he just discussed titled “A Befuddled Wizard’s Guide to Making Mead“.  With his permission, I was able to copy it down word for word in an article if you would to take a look at his unique brewing process. 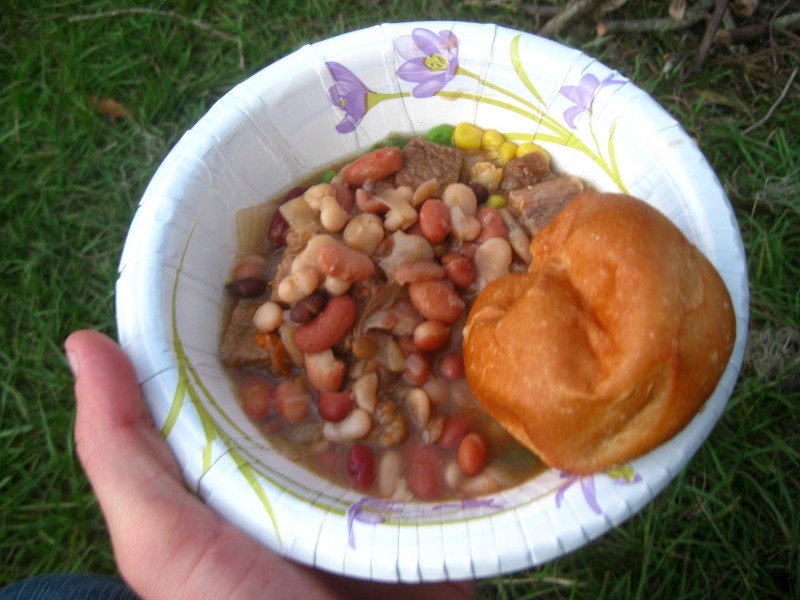 At the end of the workshop, Allen and I played the drums with some more of our newly found friends and made our way to the community dinner line where a special meal of homemade beef stew was made for us-free of charge-along with some vegetables, bread, and sweet tea.  I have to tell you that it was hands down some of the best beef stew I’ve ever had.  The flavor was insanely intense and alongside the sweet tea washed down very nicely into my stomach.  After supper and much more socializing, the main ritual was about to begin.

Apparently, during every Pagan Festival, I learned that they practice different rituals whether it be Hawaiian, Wikkin, or a variety of other religions.  This time everyone was going to honor the Cherokee Indians with the “Cherokee Full Moon Ritual“.  During the ritual, everyone joined hands to honor and share the practices of the Native American traditions. 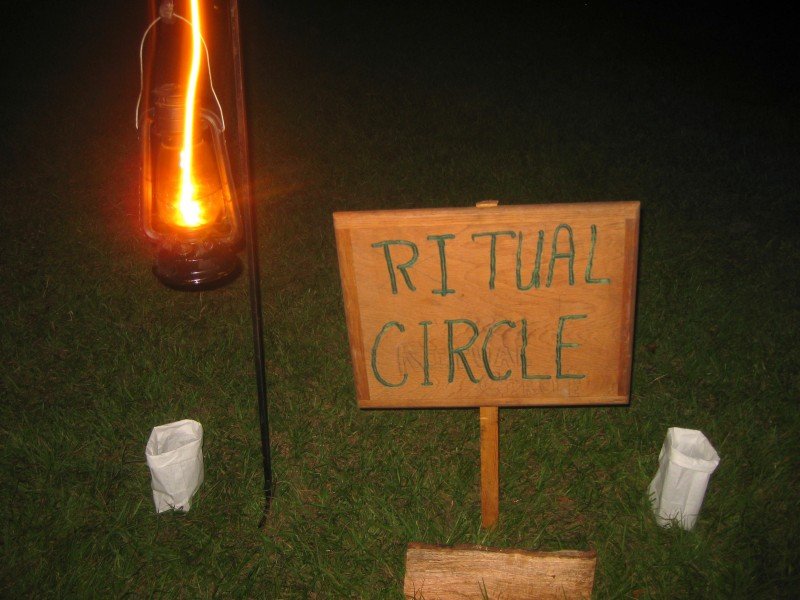 A man by the name of Grey Ghosthawk leads everyone in a Cherokee Full Moon Ritual to hear the tale of Selu, the Corn woman, and her sons.  During the carefully reincarnated process, everyone received the blessing of cornmeal and tobacco, released all of their resentment, anger, hate, and fear in return for the Great Spirit’s blessings.

The only words that I could conjure up for the entire ritual were beautiful.

Although the entire day seemed to be over, once the ritual was finished it was time for the real fun to begin and personally, this was my favorite part!  Warmed up from the night before, I grabbed one of Allen’s drums and joined in with a collection of what must have been 30-50 different people dancing, playing an instrument, or singing around the fire. 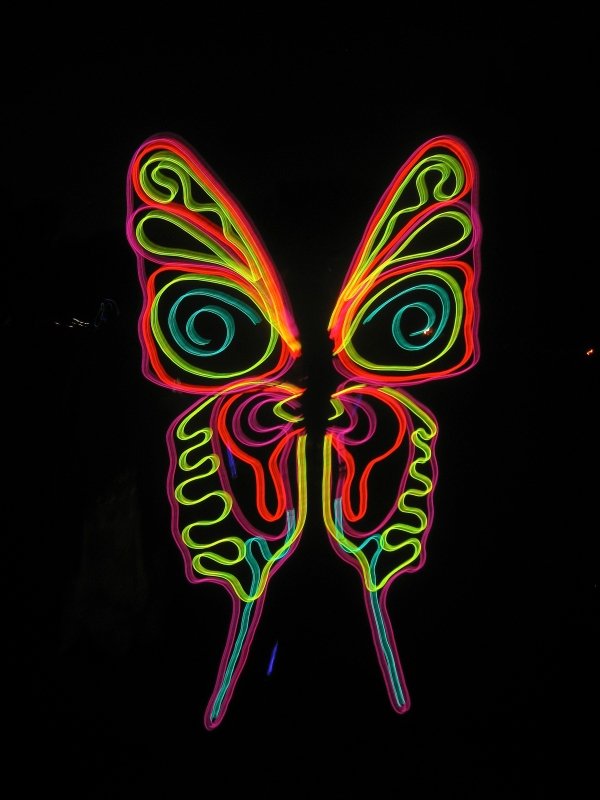 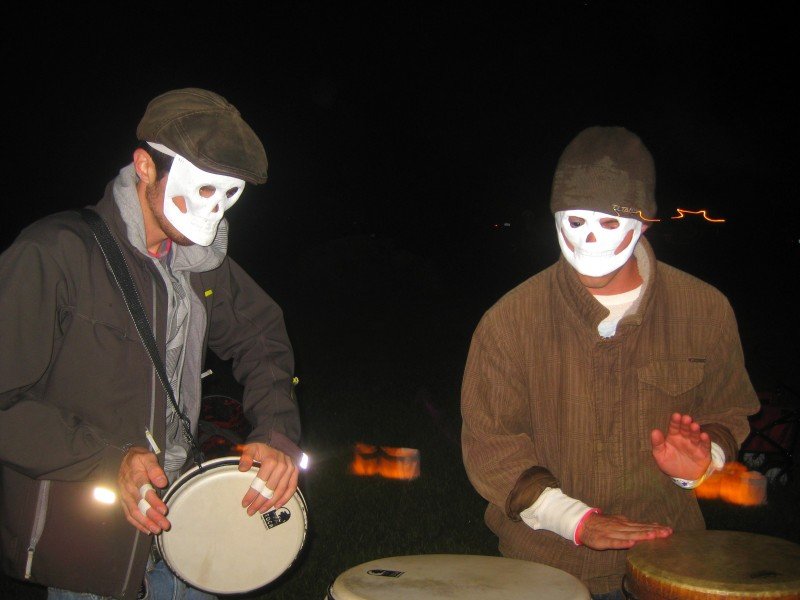 Throwing on a mask and adding my own little twist to the beat, all the gypsy belly dancers came out in their individual costumes and began dancing around the fire for the rest of the night.  There were quite a few different costumes but one of my favorites was the neon butterfly that you can see above.

It was refreshing to actually be at a festival where individuals were so comfortable with themselves and so this knowledge set a whole new level of comfort for me.  I was rocking it around the drum circle next to the sacred fire into the wee hours of the night.  Definitely good times and with a combination of the belly dancers and a wicked fire-breathing fish, it was a night I could never forget!

Have you ever been to the Ocala Pagan Festival before?