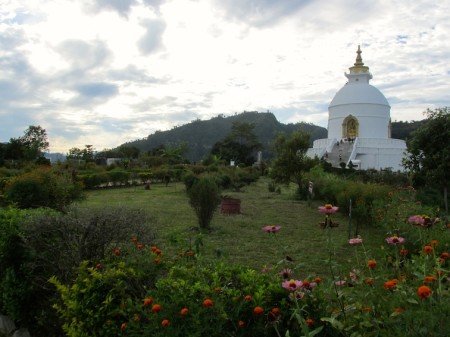 The road was rather bumpy on the ride up to the World Peace Pagoda – the Stupa in Pokhara, Nepal.  My buddy Victor, who had been riding tandem on the scooter we rented for the day, had to jump off numerous times and start pushing in order for us to power up the hill otherwise we would’ve been stuck rolling backward down the mountain.

This was not a thought I wanted to become accustomed to anytime soon and being this was the first time we’ve hung out in nearly half a decade since my working on a cruise ship days, the last thing I wanted was for us to get in a gnarly accident as we rolled over a steep cliff on our scooter in Nepal.

At the end of the road, the mountain started leveling off slightly leading to a small area where people had parked their cars in precarious positions.  Locking up the scooter and leaving it with a local businesswoman, we continued to ascend the mountain hiking up steep stairs which eventually led us to the World Peace Pagoda. 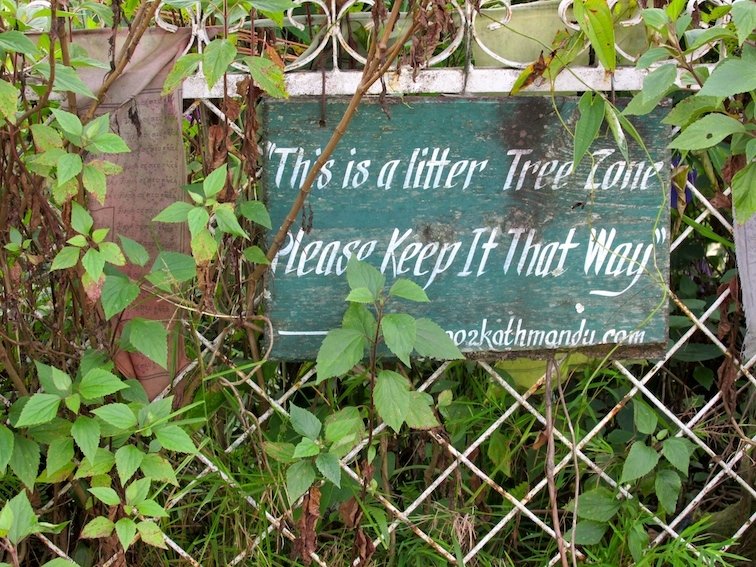 The entire site was located at the very top of the mountain giving us a spectacular view of the surrounding landscape.  In the foreground was a neatly trimmed garden of different Nepalese wildflowers, a few statues & of course the pagoda.  Meanwhile, in the background, was a vast lake hovering underneath the shadows of the beautiful snow capped Himalayan Mountains. 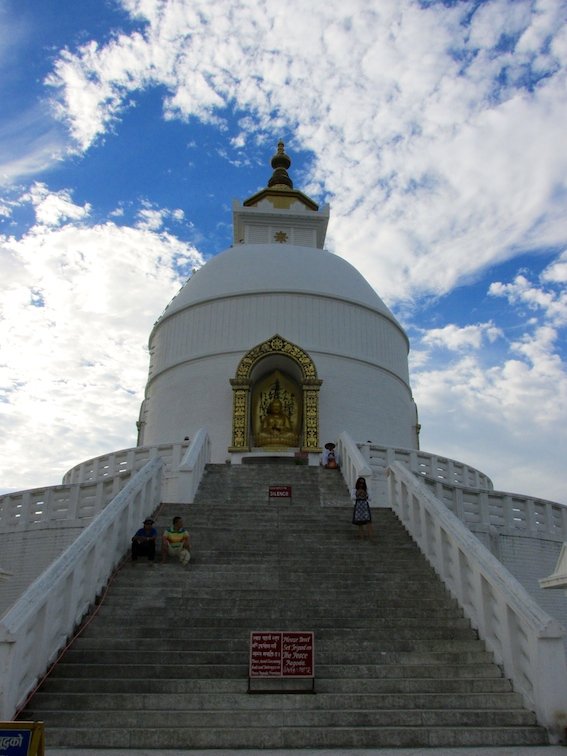 Taking in our surroundings, Vic & I began to walk to the base of the World Peace Pagoda, respectfully took off our shoes and made our way up to the very first golden statue. 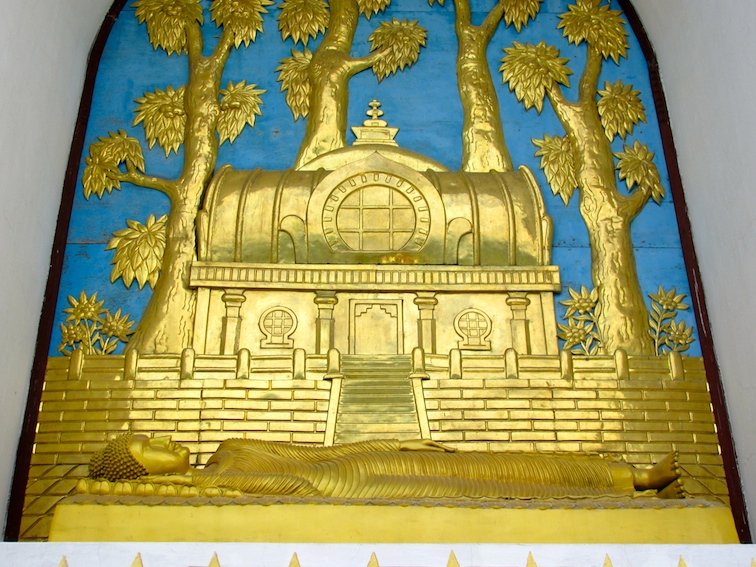 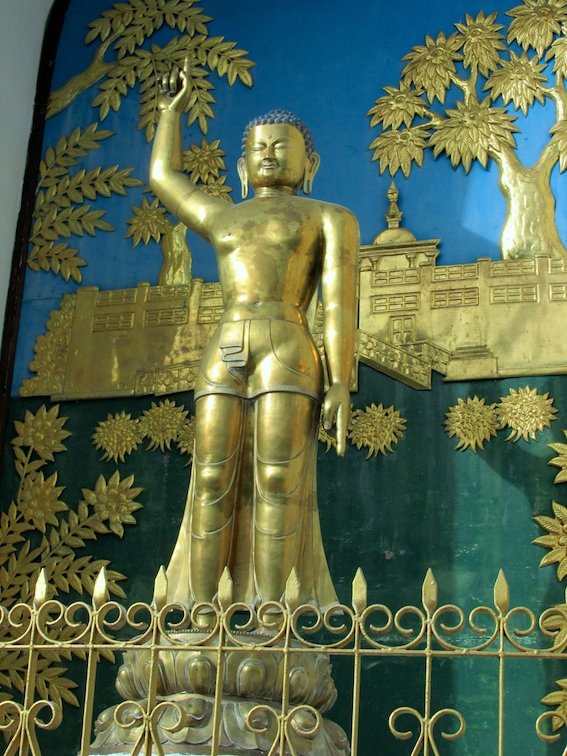 There were a total of 4 shining golden statues, illustrating the Buddha from the positions at which he was born, located on the North, East, South & West sides of the shrine; all very similar to the statues I found farther South in Bangkok.

The site, which was constructed by Buddhist Monks in the early 1970’s, was currently undergoing renovations and being repainted.  In fact, this was only one of over 80 world peace pagodas placed all around the world in order to promote peace & non-violence.  It’s quite moving how monks live such modest lives yet work this hard! 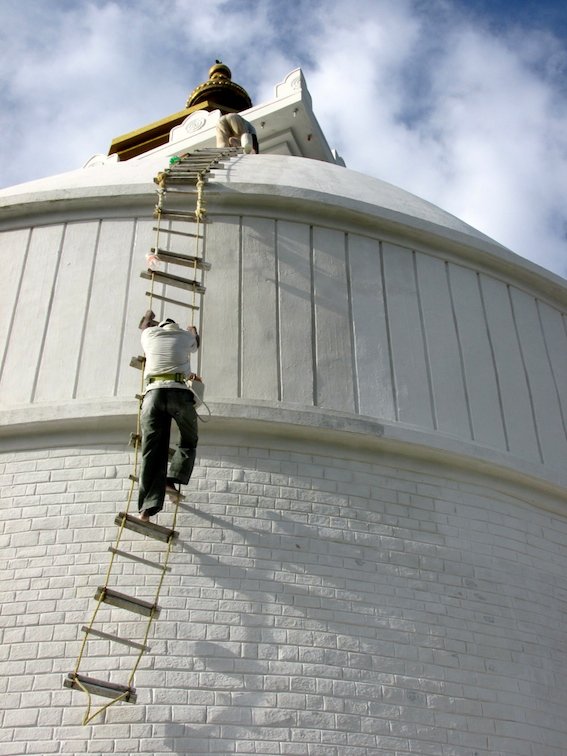 It was interesting to see how the workers were precariously placed on the side with this make-shift rope ladder and absolutely no safety equipment as they dangled 30 feet in the air.

All in all, despite their dangerous work condition and judging off of their body language/mere happiness of working on (and around) the shrine, all of the workers seemed to take a lot of pride in what they were doing to promote world peace. 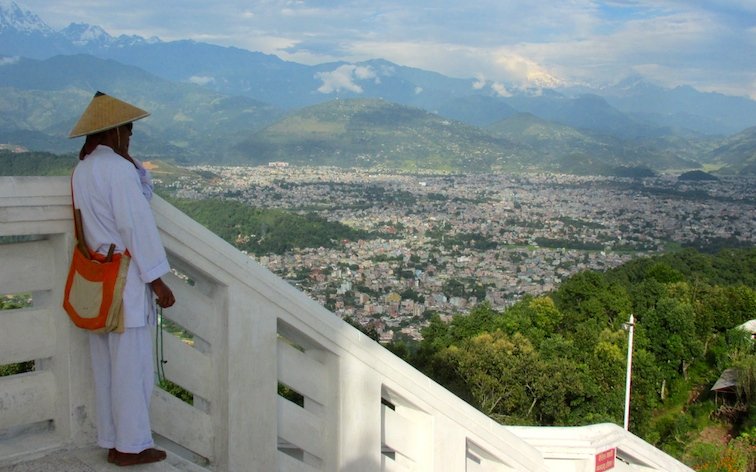 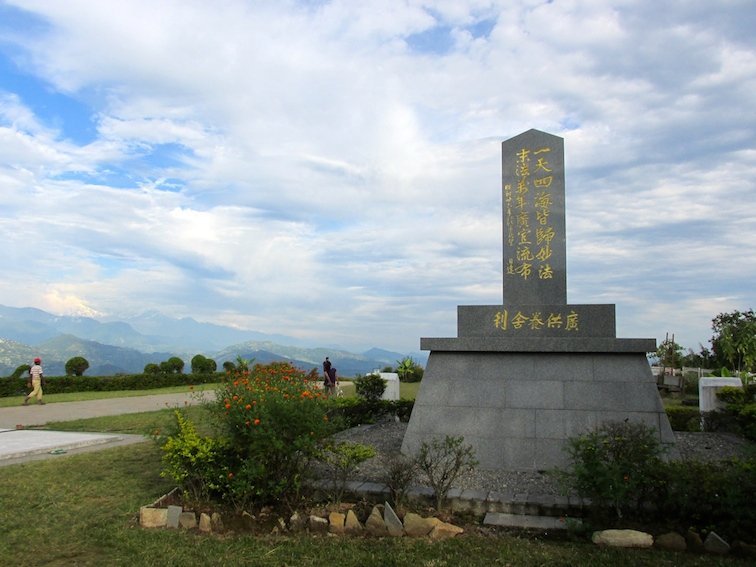 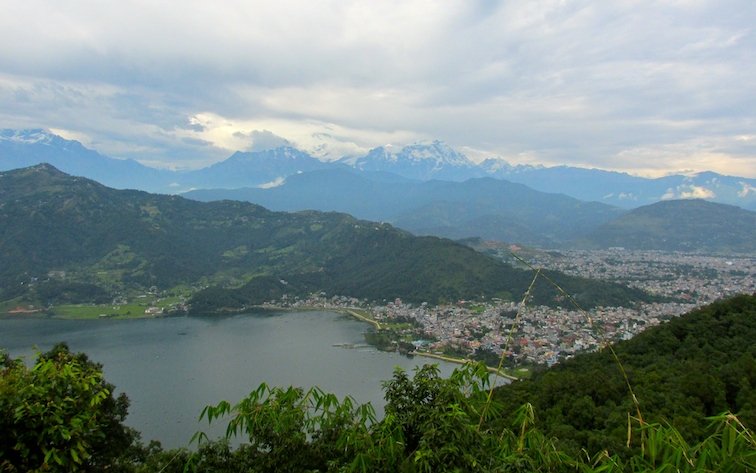 Just before the sun began to retreat behind the Himalayas, Mt. Everest & Tibet, Vic and I made our way back down to the scooter and towards Pokhara.  On the way back, we had just enough time to swing by the Gupteshwor Mahadev Cave & underground waterfall.

The trip up to the World Peace Pagoda served to me as a symbolic effort & successful token of the positive impact man can have on this world.  I guess there is hope, after all, in our fragile attempt to create world peace.

Have you ever been to any of the 80 world peace pagodas around the world?